The 105th Tour de France begins on 7 July in Noirmoutier and SBS will bring the race to Australia again with comprehensive coverage by a team of experts. Here is a summary of the broadcast times for the 2018 Tour.

With less than two weeks to go until the Grand Départ of the world’s biggest bike race, SBS TV has announced its broadcast schedule. Once again, every stage will be live on free-to-air television in Australia and the Aussie accent will be stronger than ever before. Matthew Keenan and Robbie McEwen are commentators with a wealth of history in cycling and they will be providing the call for the world feed in 2018.

The Australian duo replaced Phil Liggett and Paul Sherwen last year and it remains a hot topic of conversation in forums across the nation. New vs Old, what’s your preference?

The Keenan/McEwen pairing has been around for several seasons now. It began in the SBS studios when they called some of the Classics together and it turned into a worldwide commentary partnership in 2017 when organisers of the Tour de France, ASO, decided it was time to freshen up the coverage.

The response from the viewing public was a mix of relief and exasperation.

“SBS has been mauled for the change,” declared Malcolm Knox of Fairfax media towards the end of the Tour in 2017.

Meanwhile the #CouchPeloton went through varying levels of appreciation and disdain throughout the coverage in 2017. The new formula might not be to everyone’s liking but the revamped delivery structure is much the same in 2018 as it was last year. 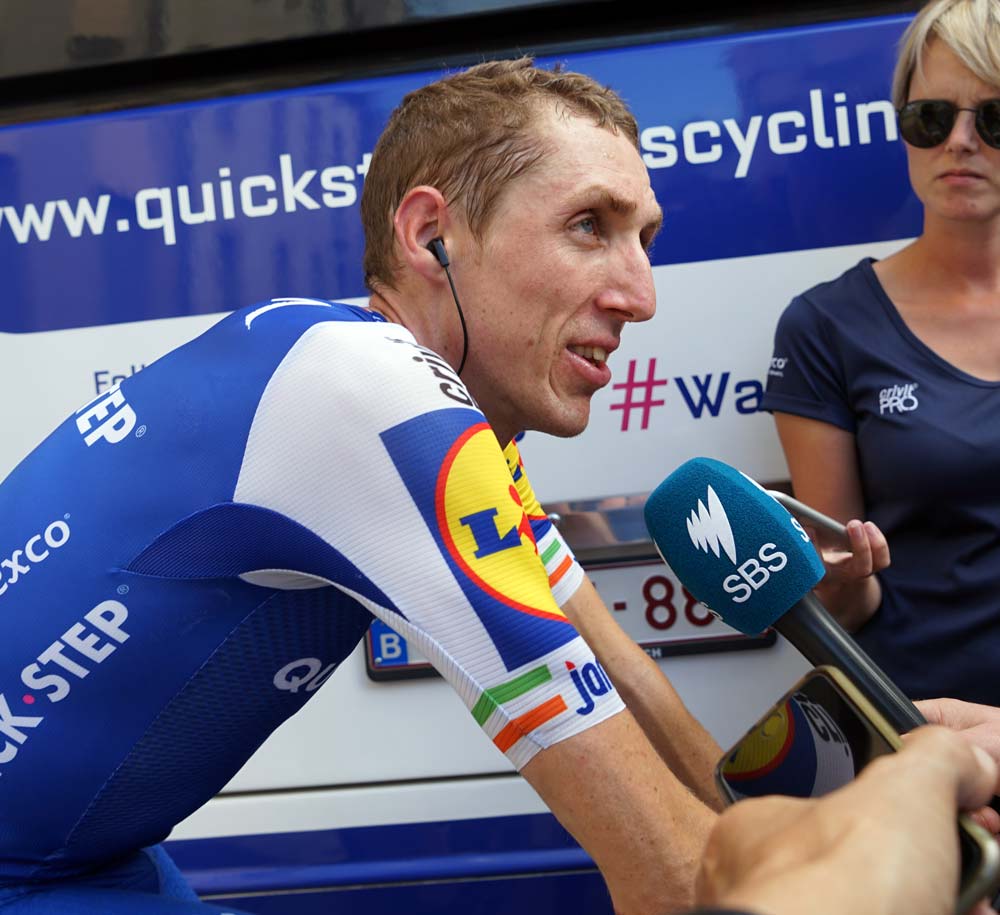 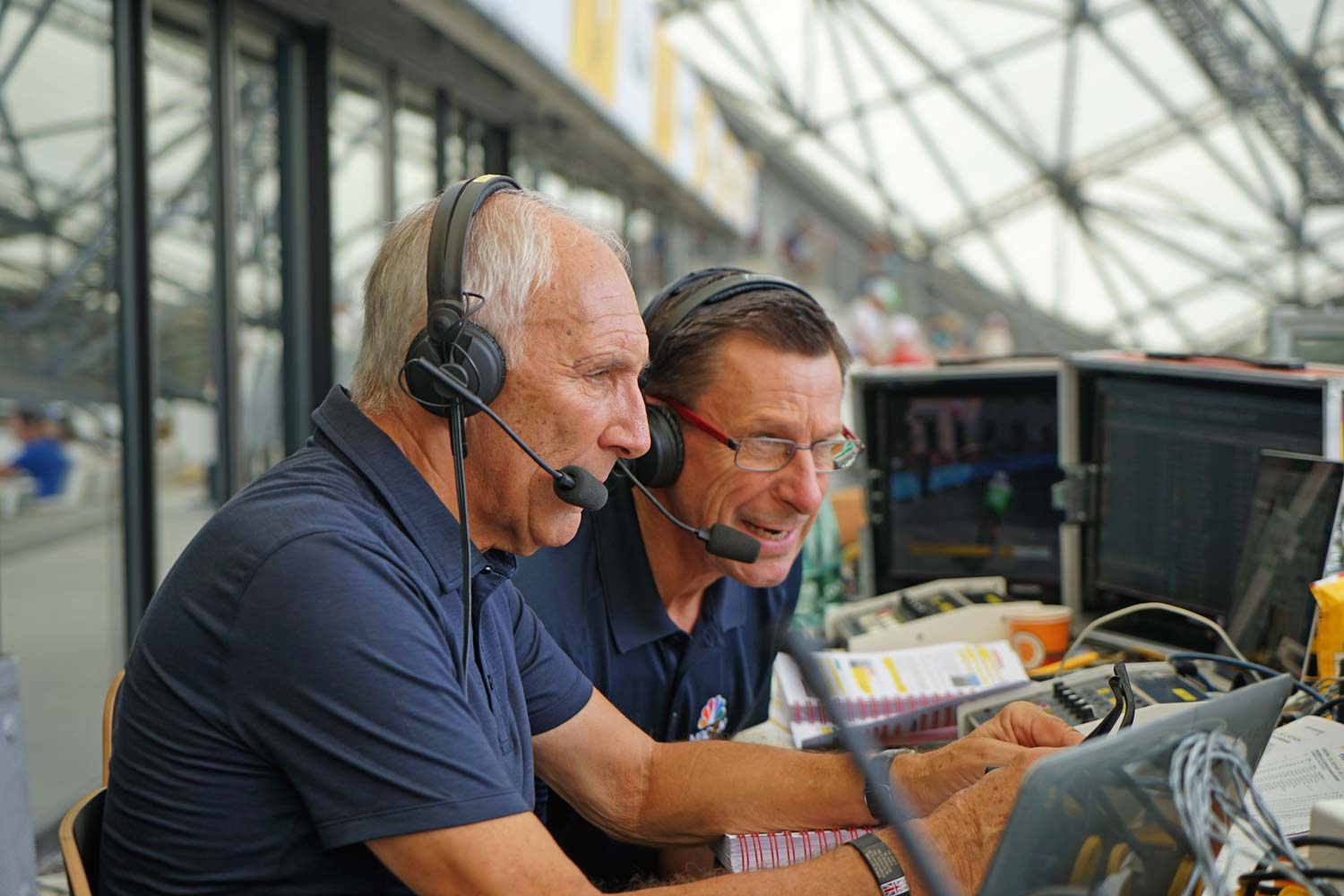 Liggett and Sherwen in action at the Tour in 2017… calling the race for the US broadcasters NBC.

Commentary is a particularly polarising topic, especially when it comes to an event that goes on for three weeks and, crucially, is viewed by many very late at night. That’s when humour (or vitriol) can be shared… and often is.

The change from the ‘traditional’ duo to new voices is not exclusive to Australia; the UK switched to different voices in recent years and, after a few days of uproar in July 2016, viewers accepted the change and got to the end of the Tour unscathed. Ned Boulting and David Millar took over commentary duties a couple of years ago and the broadcaster admits it was a tough ask.

“Taking over from Phil is pretty much as hard as it gets,” Boulting told RIDE in 2016.

Millar admits that he grew up listening to the usual voices and that, in his house, Liggett was part of the soundtrack of summer.

“I haven’t watched bike racing since I was a kid,” said Millar in 2016, “because I’ve been racing, so my memories of watching bike racing was always with Phil and Paul so to come and take that over… it’s like, ‘Oooh, that’s actually quite a big deal.’”

The Liggett/Sherwen partnership will continue for the US broadcasters but in 2018 the call on SBS (and many other networks around the world) will again be by Keenan and McEwen. 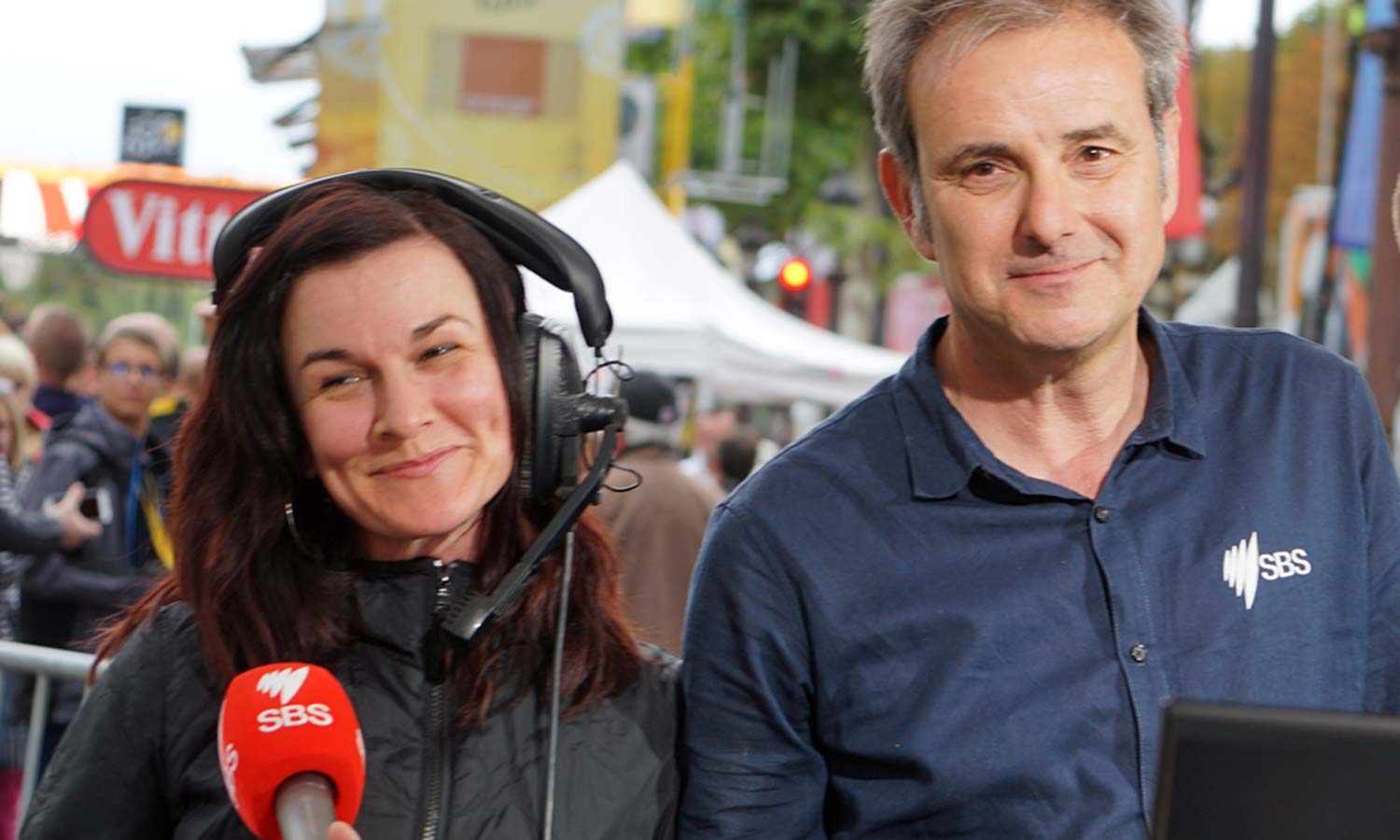 Catherine Whelan and Michael Tomalaris (above), part of the SBS team at the Tour.

The organisers traditionally strive to have stages finish as close to 5.30pm local time as possible. As is often the case with modern sport, the timing relate to the broadcast and when the audience numbers are likely to be highest.

In 2018 there are a few anomalies, and this is largely because of the FIFA World Cup, which concludes on the same day as stage nine of the Tour de France. Depending on possible clashes with football matches, some stages will begin (and conclude) earlier than usual.

(Check local guides for details as the race progresses in case of unscheduled alterations.) 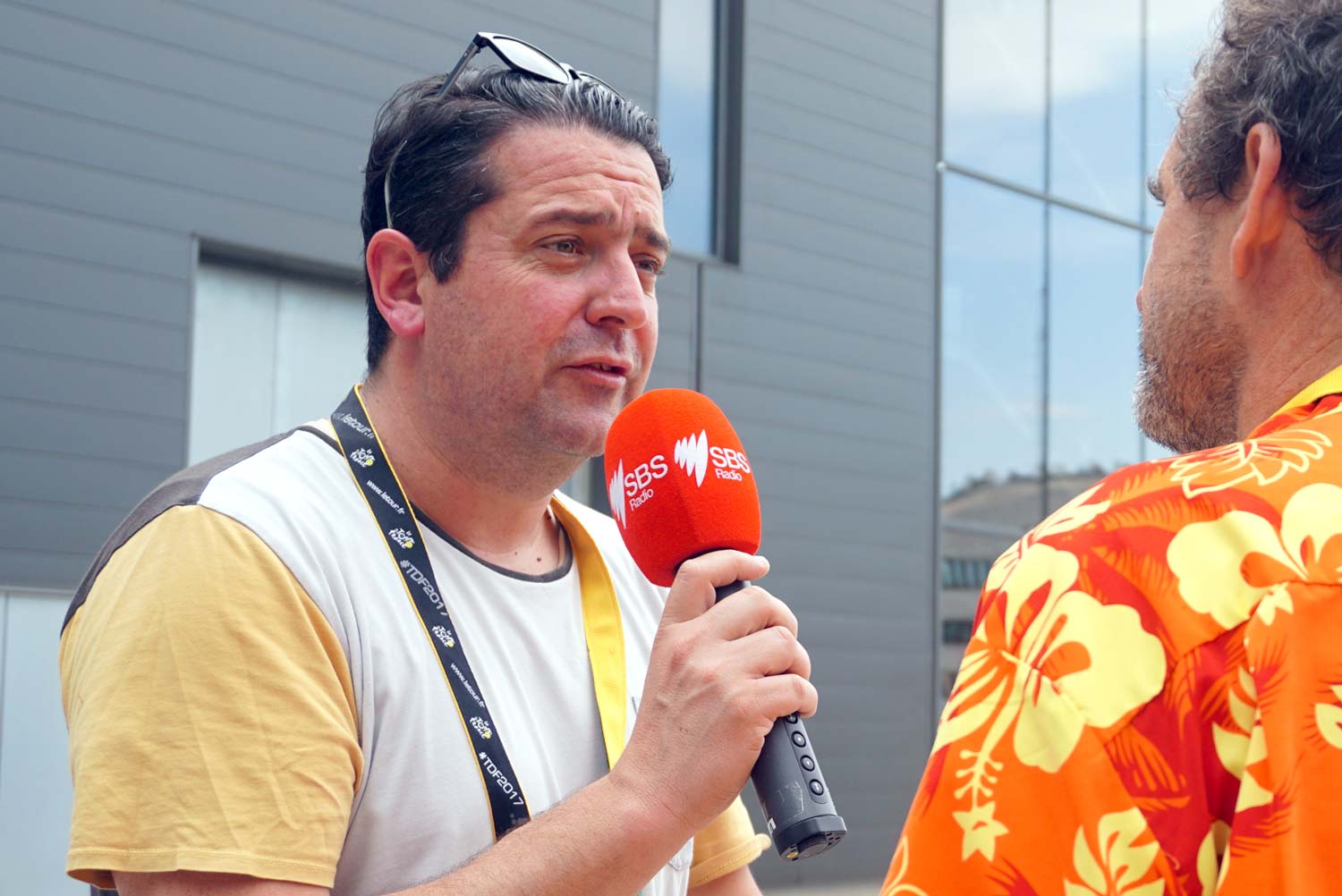 Christophe Mallet (above) will be back in France in July to bring you the Zwift SBS Tour de France podcast.

With many stages ending very early in the morning in Australia, SBS has fine-tuned its showing of highlights packages. This year you’ll find a summary of the action on its main channel at 7.00am, replays of the race at 3.00pm on SBS Viceland, and a daily highlights package – usually at 5.30pm (although this may vary, again depending on football broadcasts).

There is also the SBS Cycling Central website which will carry commentary from a range of journalists and provide feature articles, video, and audio.

Christophe Mallet will again manage SBS’s Tour de France podcasts; sponsored by Zwift, this is a daily package that includes guest commentators plus pre- and post-stage interviews and insights.

SBS also caters heavily for second-screen viewers; the Tour Tracker is back in 2018 and you’ll be able to get additional insights from this live coverage online.