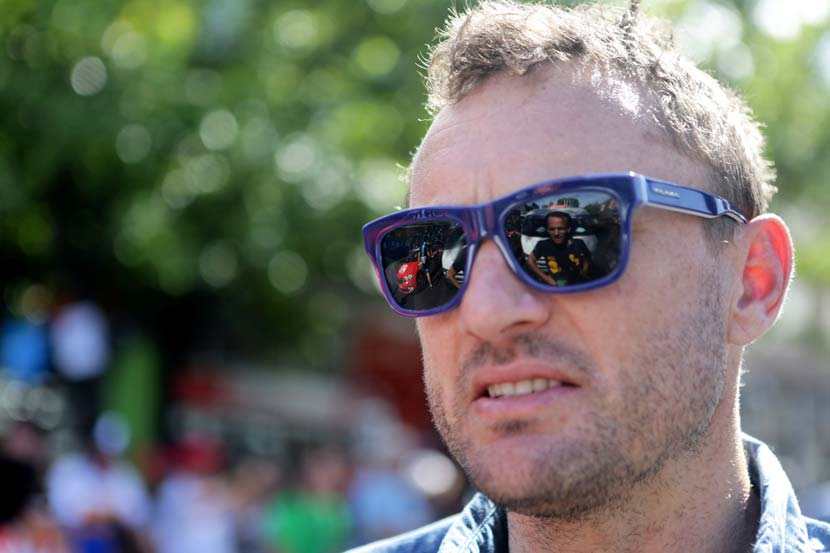 At around 6.13pm today (Australian time) it was announced that Chris Horner will race the 2014 season with the Lampre-Merida team. The deal had effectively been done before the Tour Down Under but there were a few hiccups along the way before the announcement could be made.

Brokering the deal was Baden Cooke. He was a rider with Orica-GreenEdge in 2013 and on 30 January the next year, he arranged a last-minute recruitment of one of the stars of the peloton who had been left stranded without a professional contract a year after winning the Vuelta a España. In RIDE #62 there’s an exclusive interview with Horner, talking about his victory in Spain and the struggle that came because of doubt about the future. He’s 42, and he now has a job.

Shortly after the news was announced, we spoke to Cooke about the recruitment process and the expectations on Horner in his season with Lampre-Merida. Here is a transcript of that exchange…

Baden Cooke: “It hasn’t been an easy process. There hadn’t been much success from his last agent. Obviously it was a really difficult year so you can’t be too hard on him but I took Chris on on the first of January. We almost had a deal done in two weeks, [around] the first 10 days of January. Then there was a bit of a leak in the media from someone – we’re not quite sure who it was – and then that slowed things down a bit because we were trying to keep it under wraps. And that just added an extra element of difficulty to it.

“Now everything has been sorted through and I think it’s going to be a really good partnership.”

RIDE: What are the terms? Is it one year?

And, even given the ‘desperate’ situation… were you able to negotiate a good financial return?

“It’s very top-heavy with bonuses, is what I’d say.”

And Chris is obviously happy. What’s he had to say to you?

“He messaged me yesterday and said, ‘Thank you so much, I couldn’t have done it without you.’ He’s rapt with the deal.”

What do you expect the program will be?

“He’s going to do the Giro and the Vuelta. We’re trying to get it into the UCI as soon as possible so he can do Mallorca Challenge.

“I could read the whole program [as it’s been mapped out] but I don’t have it with me right now. It is The Giro. The Vuelta.

“Obviously the team has got a lot of young riders and they’re predominantly focussing these days more towards a young team so what they saw in Chris was one of the most experienced guys in the peloton and they want him – more than for his strength and winning capability – as a leader for the young boys, to teach them what to do.”

And I guess the theory is that they return the favour and allow him to earn his bonuses.

“Well, yeah. Let’s hope so. They have Niemiec and Cunego and they were already going to target the Giro so Chris is going to be in a mentoring role there; they’re not going to take the leadership away from those guys for the Giro and I think he’ll get his chance at the Vuelta.

“Obviously they’ve got Rui Costa for the Tour… he and Horner really only cross paths in one race. They’re two of the strongest guys in the world and they’re going to keep them on separate programs.”

Then there’s the question of his age. Are there expectations for him to keep on going…?

Has he been training?

“Yes. He has not stopped training. He was ready to go to run top-five in Tour Down Under. He was primed and ready to go.

“He did six and a half hours today.”

So when will he go to Europe or is he going to be based in the States?

“That’s between him and them. I’m not really sure. I think he’s going to be predominantly based in the States but we’re hoping that he’ll get over for the Mallorca Challenge [9-12 February].

What else should we know?

“Ah, just that once I took him on board it’s been… well, obviously, I missed getting a team myself so I knew how tough it was to get a team. So I had to start cold-calling people left, right and centre… basically I got on to Brent Copeland, a South African guy at Lampre-Merida and he’s believed in the idea from the beginning and he’s been really good to deal with. He took it to all the sponsors – the sponsors who were in Italy, the sponsors in China… – he made the deal happen. He’s very thorough and there was a lot of stuff go to through.”