We catch up with former pro cyclist Paul Crake to find out what he’s up to 13 years after a racing accident left him a paraplegic. With the right attitude and new technology, he’s able to help clients realise a dream scenario…

No one has run up the stairs of the Empire State Building faster than Paul Crake. He was a phenomenal athlete who switched from stair running to cycling in his 20s. Then, in 2006, hellacious wind on New Zealand’s south island blew him off the road during a race. His spine folded around a fence post in the resulting carnage and he has not walked again since.

Despite a significant setback, Crake moves from one challenge to the next with purpose.

His story is one many who follow cycling (and stair running) know. For almost 13 years, he’s lived without being able to move (or feel) anything from the sternum down.

His personal immobility sent him in a new career direction and these days he finds pleasure in his new profession: helping give mobility to others.

As the owner of ‘Total Ability’, Crake spends his days conjuring ways to help people get around. And no hindrance seems too extreme.

I met Paul during his bike racing days. We’ve stayed in touch ever since and he never ceases to impress me. As a stair runner, he had no equal. As a cyclist, he had all the potential to be the best in the world with a physiology AIS staff declared to be “on par with Cadel Evans, if not better”.

He’s overcome setbacks with tenacity and although he was a world-class athlete in a couple of sports, it’s as a businessman that Crake has arguably found his greatest rewards.

Total Ability has a tagline which states: “Driving controls for your independence.”

I recently got a chance to see what is possible thanks to his association with a range of companies, key amongst them Fadiel Italiana, that use technology to help people get moving. It’s inspiring stuff.

Ame Barnbrook is a fine example of how Total Ability is able to change lives.

Watch the clip below to see Ame Barnbrook – a 31-year-old who was born with no arms, one leg and three toes – drive a car.

“We do a lot of work to get this equipment into vehicles like this,” Crake told me in October 2019, while we watched Ame driving around a car park in Sydney’s southern suburbs.

It was just her second driving lesson in a heavily modified vehicle provided by Total Ability.

Ten days earlier, Barnbrook first turned on the ignition of a car. Her first metres of driving were done in reverse, rolling out of the Total Ability workshop.

To get her started with this driving caper, Crake offered to back the car out before her lesson began. “No need for that,” she replied, adding: “If I’m going to drive, I’ll have to reverse as well, so we may as well get things started by going backwards.” 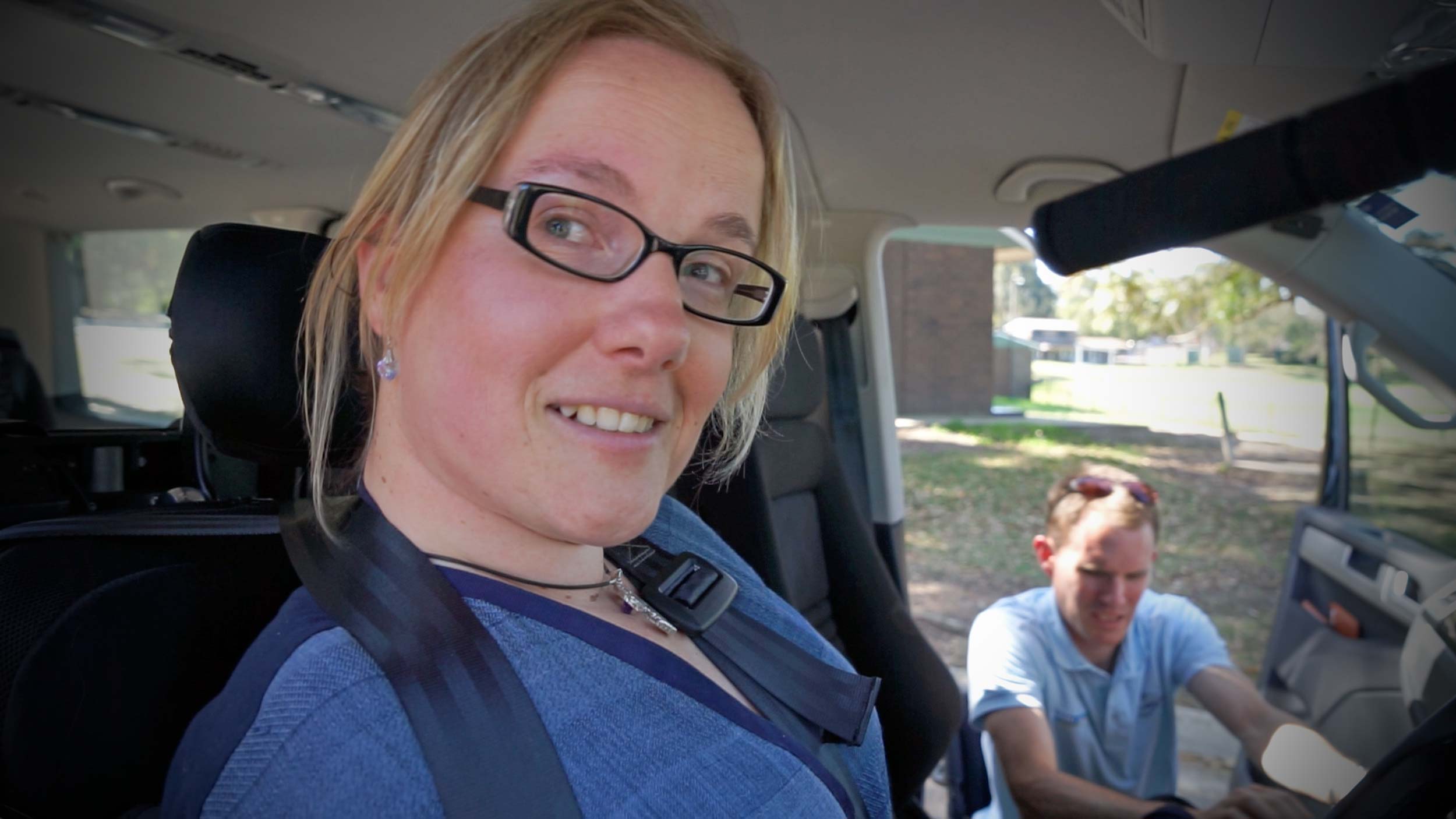 A joystick for her toes serves Ame as an accelerator, brake, and steering wheel.

When Ame Barnbrook drives by, sitting in her wheelchair positioned where the driver’s seat would usually be, it is something of a visual shock.

“Look mum,” she joked during her first drive, “no hands.”

It is her take on the classic like from learning to ride a bike. And although it’s early days as a driver, she is thrilled to finally get the chance to realise her dream to have her own car and, with it, an entire new world of independence.

“To see someone like Ame be able to come along and actually drive – and drive with such ease and competency, with such road skill – is quite rewarding,” said Crake while the second lesson was being conducted.

“It’s pretty impressive what we can do and how manageable – with the right training – it is to drive a vehicle competently and safely with this technology.” 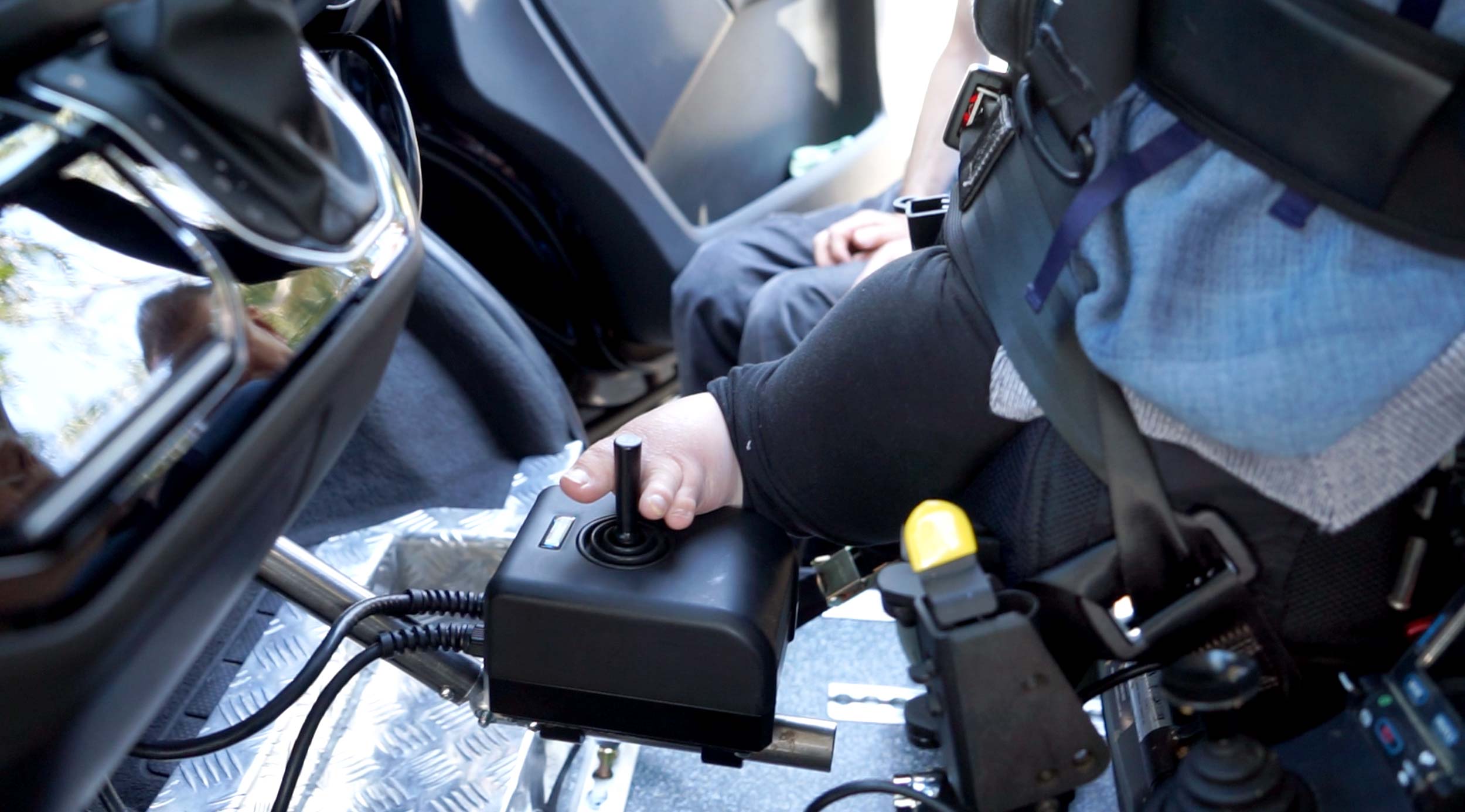 Barnbrook uses controls for her toes to brake, steer and accelerate.

As is the case for most new drivers, the first lesson was about understanding the basic feel of the vehicle. “She did extremely well,” said one of Total Ability’s specialist driving instructors, Dean McMillan. “We spent an hour and a half going around a carpark and there was not one moment when I had to take over controls.

“She didn’t go fast but managed tight turns, reversing and some more complicated tasks better than many able-bodied new drivers.” 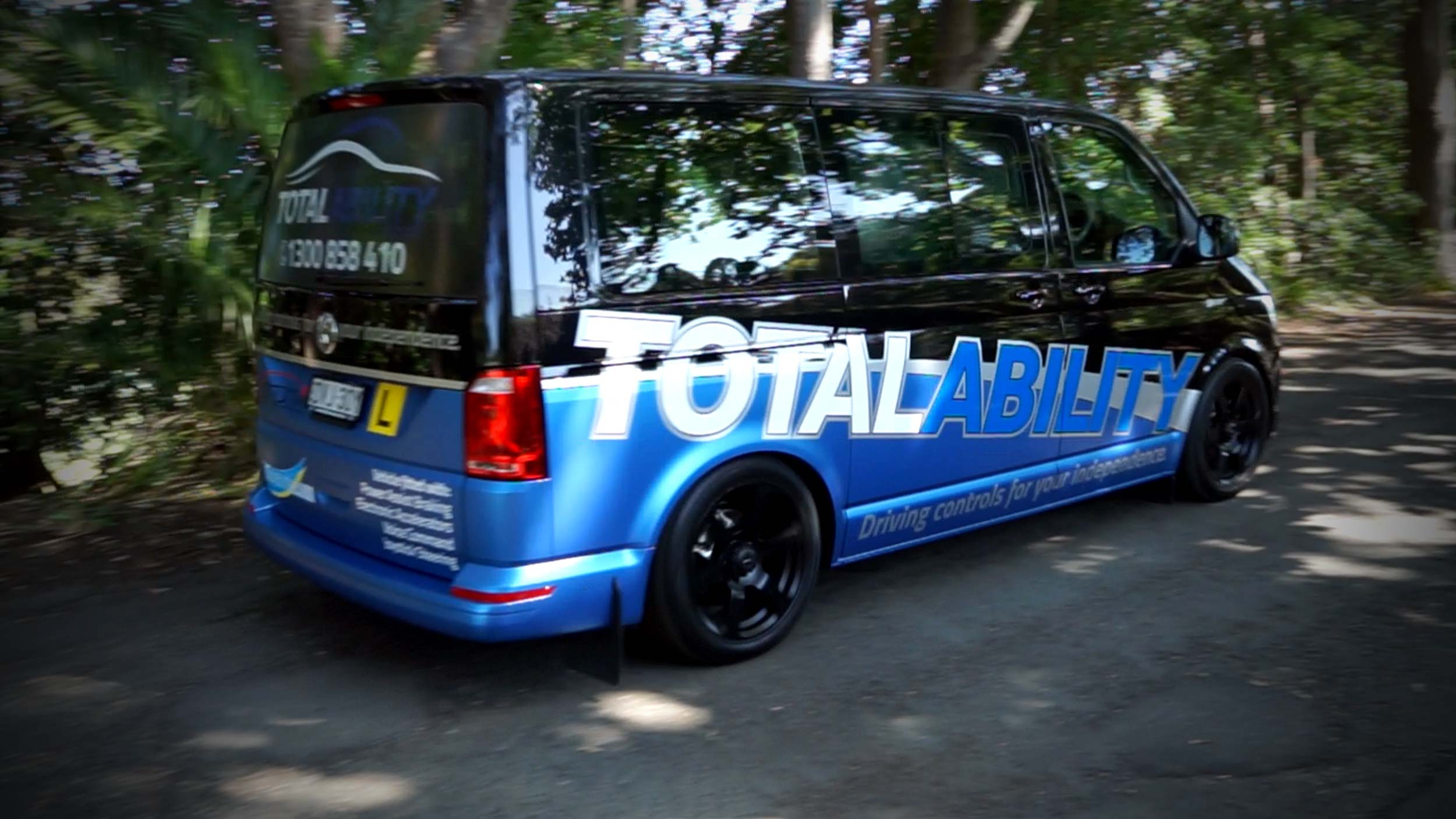 A Volkswagen Transporter with numerous modifications was the first vehicle Ame Barnbrook drove after getting full marks during her application for a learner’s permit.

The second lesson went even better with Ame going a little faster, executing U-turns and three-point turns with a minimum of fuss, and generally getting a better understanding of road feel.

“I’m using the accelerator a little more this time,” she explained after the second session with McMillan. “That helped me understand the car a little bit better.

“There isn’t much more that we need to do to customise the controls, Paul has thought of everything.

“I need to learn all of the words for the voice activations,” she said, while still in the driving position, “but, other than that, I feel like I’m ready try driving on an open road.”

It took roughly 18 months to get the Volkswagen Transporter ready for Barnbrook’s first lesson. The technology required to drive with three toes doesn’t come cheap but Crake knew it would be possible for her to drive despite her limitations. 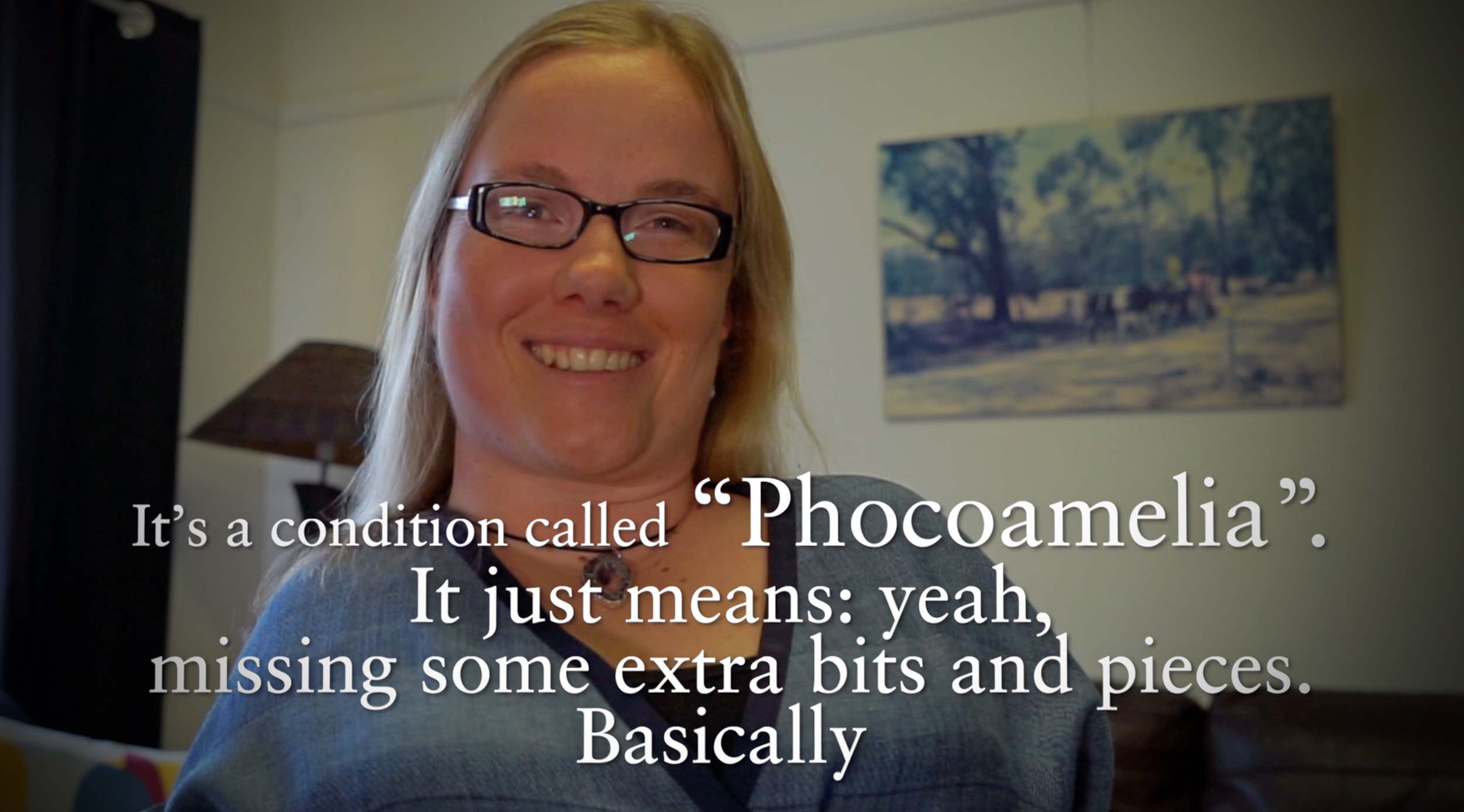 Barnbrook is one of five or six people in Australian born with a condition called Phocoamelia.

Barnbrook has only known life without arms and one leg and admits that being born this way makes it easier to deal with. The driving story is another example of her looking for solutions rather than dwelling on a problem. She wanted to try driving, so she looked for a way to try it. And that’s when Paul Crake came into the picture.

Coincidentally, the two had previous met while involved in a project that encouraged people living with disabilities to try sailing, one of Barnbrook’s other passions.

Around a year after his accident in the Tour of Southland of 2006, Crake tried sailing. He enjoyed the experience but hasn’t pursued it as a third sport, largely because his energy is centred on Total Ability and the quest to get people who may otherwise considered driving an impossible task onto the road. 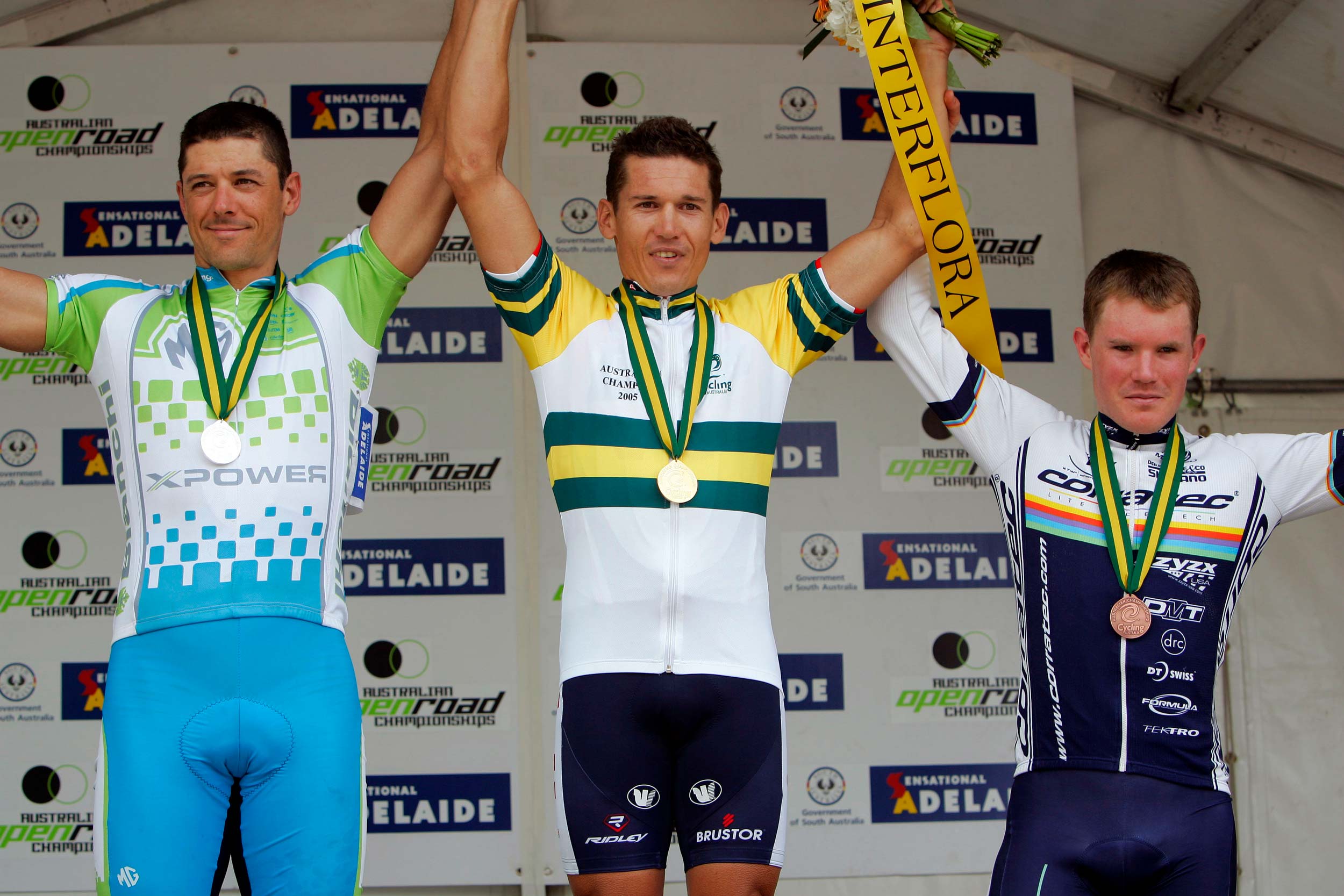 A year before the racing accident that left his a paraplegic, Crake finished third in the road race at the national championships won by Robbie McEwen. (Photo: Yuzuru Sunada).

Moving on from a devastating situation

“Five of us got blown off the road but I was the one that hit the fence pole,” said Paul Crake of the accident during the 2006 Tour of Southland that changed his life. “The next thing I remember is, 10 days later, being told: ‘You broke your back.’

“A week or two after that, on what happened to be on my 30th birthday, I finally got to speak one-on-one with the spinal specialist who had operated on me and he said, ‘Think yourself lucky, you’re alive.’

“And that was the moment he said, ‘You’re not going to walk again.’”

Crake never realised his cycling potential. He went through difficult times while trying to come to terms with the ramifications of the accident that left him paralysed from the chest down. And he quickly looked for options to get him back doing some of the things he loved.

Cycling was a big part of his life, but he has always had a passion for driving. He formed a relationship with Fidiel Italiana, acquired the means to control a (modified) car and Total Ability is the result of an ongoing partnership ever since.

There were dark moments in the years after the crash but the quest for mobility – despite not being able to walk – sent Paul Crake’s life in an entirely new direction. He work life is hectic but the stories that emerge from what he does with Total Ability are inspiring as much as they are surprising.

He still holds the three fastest times for the run up the stairs of the Empire State Building (and many other famous tall buildings) and Crake is justifiably proud of that accomplishment. He was a physiological freak with athletic gifts that were taken away from him by a rank twist of fate but the upside to that story is that he is now providing people like Barnbrook with the chance to realise the dream of a more independent life. •

Find out more about Total Ability and Ame Barnbrook’s company Expanding Influences – and if you’d like to help her raise funds for a car of her own, visit Ame’s GoFundMe Page.