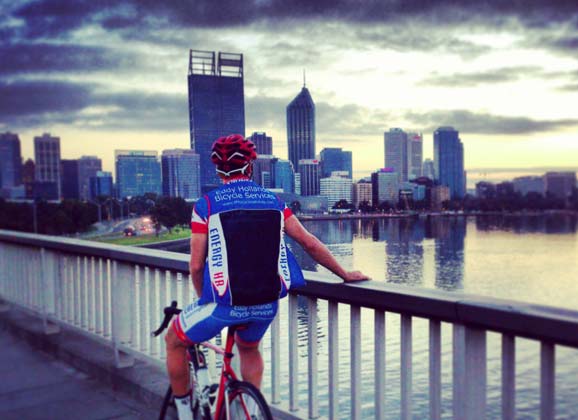 The original instalment of the ‘Caffeine Culture’ series was about the cycling scene in Perth. That was 12 years ago and although much has changed in that time, some things remain the same: it’s still a great place to ride and, if you choose to do so, you’re bound to find a bunch that suits your desires. Nick Squillari visted WA to find out more… 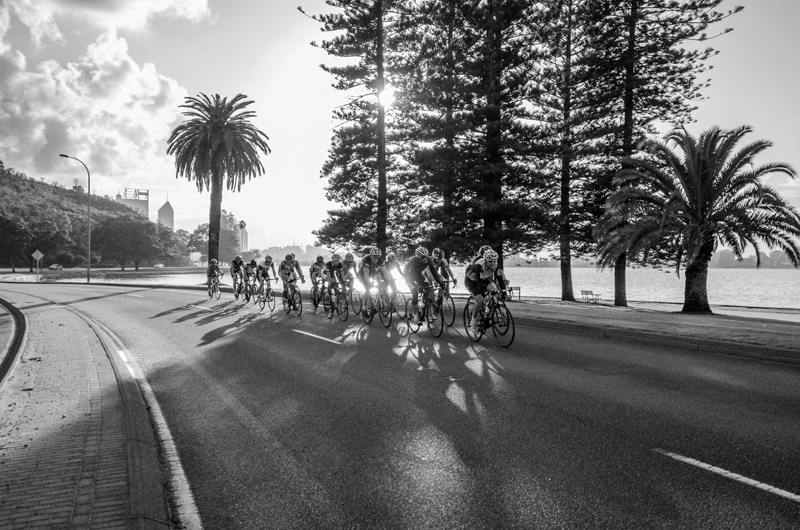 Ride #1 – Technology Park
Considering the influence of cycling, it’s no surprise to discover that Perth has a bustling race scene. A popular ride option is the South Perth Rouleurs (SPR) ‘Technology Park’ course. Found within an industrial estate, the roads are closed – which, given the speeds that all the grades were generating around the 1km circuit, was appreciated. If the 2014 state titles were anything to go by, expect big numbers and hard racing. The locals inform me that Technology Park is popular and the SPR hosts are passionate about their crits, with plans to hold a crit a day next summer. Optimistic, perhaps. But who would not want to have clubs so keen to promote and grow local racing?

Ride #2 – Old Papa’s
To some Fremantle may come across as the ugly duckling within the realms of Australian Rules, but this southern coastal suburb lays claim to trumping uptown in more than just the great cuisine on offer and the sparkling scenery. ‘Freo’ is also the starting point of a bunch ride that comes to prominence every Boxing Day – Old Papa’s. Boasting a ‘start list’ to make any official race organiser weep, an impressive array of bike bling still clinging to remnants of Christmas wrapping paper, and a trophy for the winner, it’s the pinnacle of the cafe racers’ year.

Ride #3 – WAR
Isolation, as Charles Darwin found, can be responsible for the evolution of a species. It looked to me to be some kind of Darwinian cycling evolution taking place in Perth as I discovered the Wednesday Afternoon Ride (WAR). No town or city comes to mind that has a ride smack bang in the middle of an afternoon in the middle of the working week. And more’s the pity.

WAR kicks off at 2.30pm and depending on who has the afternoon off (which, going by the calibre of the bikes, would appear to be some well-to-do businessmen – perhaps even some of those self-made millionaires I spoke of earlier), being even a minute late can mean the traditional Perth WAR will have started without you.

Ride #4 – The Hills
If racing and bunch training rides aren’t really your thing and you’re looking for roads that point upwards, then Perth still has you covered. The only perceived hiccup could be the street circuit navigation needed to get out to the east side, until you remember the amazing bike path network. From where I was staying just south of Fremantle, it was bike path all the way to the base of Welshpool Road. Then it’s time to start climbing.