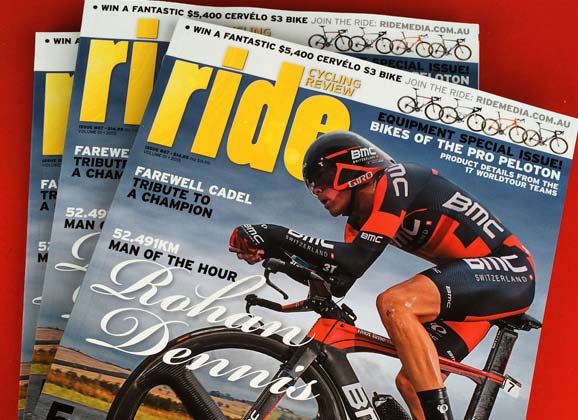 We ride. And we make a magazine called RIDE Cycling Review. It’s what we do. There’s content online and you can find an array of extras about bikes, rides and riders with a quick click in the search option. There are interviews and galleries that are part of the production process of our core business: our magazine. You can find it in published on paper in newsagents and bike shops or you can get it to online.

Here is the contents list for #RIDE67. Inside are hundreds of glorious photos (many of which you can find in their online galleries) and many stories about cycling. We review it, that’s what we do. We ride. And we hope you like this issue.

– Rob and the RIDE team. 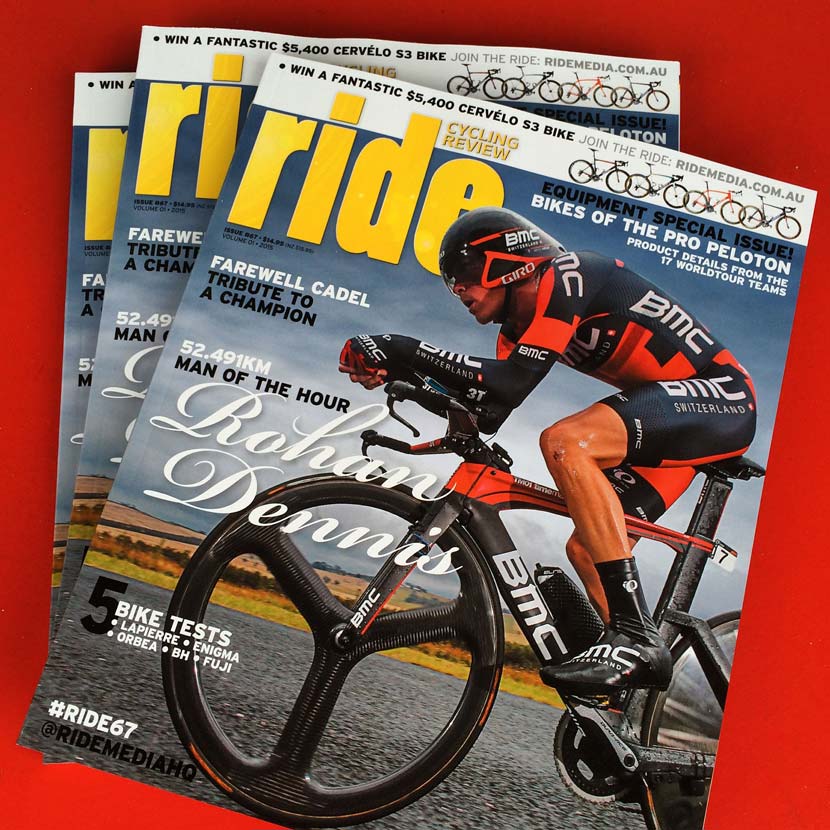 • Why Ride? V8 Supercar Drivers: Professional V8 Supercar drivers talk about swapping four wheels for two and why they enjoy cycling so much. By Jane Aubrey.

• Closing a Career: Farewell Cadel: Rob Arnold reflects on the racing years of a now retired champion and the vast number of accolades he acquired.

• Tour of Oman, by Jean-François Quenet

• Retro Display: Legends on Show: Some of cycling’s most storied bikes came together in one room in January. A pictorial commentary of cycling’s beautiful past. Photos by Tom Roschi.

• In the USSR: The Story of Soviet Cycling: Part two of the series on Soviet cycling sees Nikolai Razouvaev graduate from having no hope to two distinct choices…

• Commentary: Progress by Cooperation: James Stout takes a light-hearted look at some of cyclists’ greatest follies.

• Analysis: Nibali – Training by the Numbers: A discussion with Nibali’s long term coach reveals some of his training regimes and methods. By Kenny Pryde.

• Legacies: Pantani: RIP…finally: Some more information was discovered regarding Marco Pantani’s death which can put an end to unfair speculation. By Justin Davis.

• Q&A: Bobridge Before The Hour: Jack saw pain like few others during his maiden hour record attempt. Revisit how he was feeling a couple of days before his brutal ride. By Rob Arnold.

• Round Table: A collection of first thoughts about the five bikes on test.

• Lapierre Aircode 900  A red rocket or just a flash in the pan? The Lapierre gets rigorously put through the wringer. By Shane Lovejoy.

• Enigma Esprit How does the only metal bike on test stack up to its carbon contemporaries? By Jack Lynch.

• Orbea Orca M20 The latest Orca has an eye-catching paint scheme and looks like it should ride pretty fast… By Jack Lynch.

• Fuji Transonic 2.1 Fuji’s first foray into the aero road market is different and yields some surprising results. By Rob Arnold.

• BH Quartz A bike with endurance geometry and disc brakes should suit most new cyclists. By Craig Klement.

• Bikes from the Bunch: Five Kiwi cyclists show off  their bikes.

• The Back Page: The Most Enduring Cycling Product. By Rob Arnold.