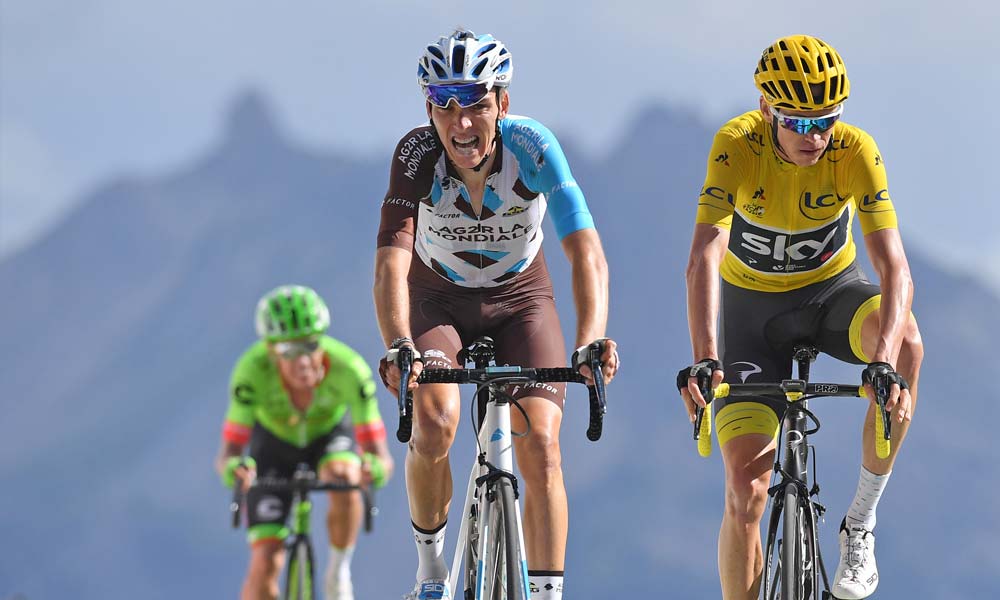 The 105th Tour – analysis of the route

The route for the 105th Tour de France was unveiled in Paris overnight. We speak to Stuart O’Grady – the veteran of 17 Tours – about a most intriguing course for the 2018 edition…

It’s mid-October and that means it’s time to think about next July. Why? Because this is when the route for the next Tour de France is announced.

The official launch of the itinerary for the 105th edition of Le Tour was held at the Palais des Congrès in Paris yesterday. We’re used to seeing the graphics – a line tracing a path around the host country, punctuated by particular sites that mean something to bike riders.

Some place names can provoke considerable angst for those who hope to be at the Grand Départ in the Vendée on 7 July 2018. And there were a few eye-popping moments as some elements of the route were shown off by race director, Christian Prudhomme, for the first time yesterday.

These places will all host stage finishes. And they are likely to have an influence on the result but there are many other locations – and innovation to the route – that will play a significant role.

Perhaps the biggest surprise is stage 17, a 65km mountain stage in the Pyrenees with three mountain passes.

While speculation about the route traditionally ramps up in the days leading to the unveiling – often with correct assumptions – when Prudhomme referenced the 65km race from Bagnères-de-Luchon to St-Lary-Soulon, there was an audible gasp in the auditorium filled with almost 4,000 people.

But that innovation by Prudhomme and his cohort isn’t the only shock.

Consider the stage from Arras to Roubaix: on day nine (before the first transfer/rest day) – 154km with 15 sectors of pavé! What!?

Mayhem, that’s what. Exciting racing… but mayhem just the same.

There is a team time trial (35km in stage three) and there is an individual time trial – but only one (31km, stage 20 on the final Saturday).

There are amendments to traditional elements.

There will be, for example, time bonuses for the first three riders at an intermediate point of stages one to nine (excluding the TTT) which award gains of three seconds, two seconds and one second for the first riders over the line.

It will also be the first Tour in a long time with less than nine riders per team. The UCI has amended the regulations and, in 2018, there’ll be eight riders instead. 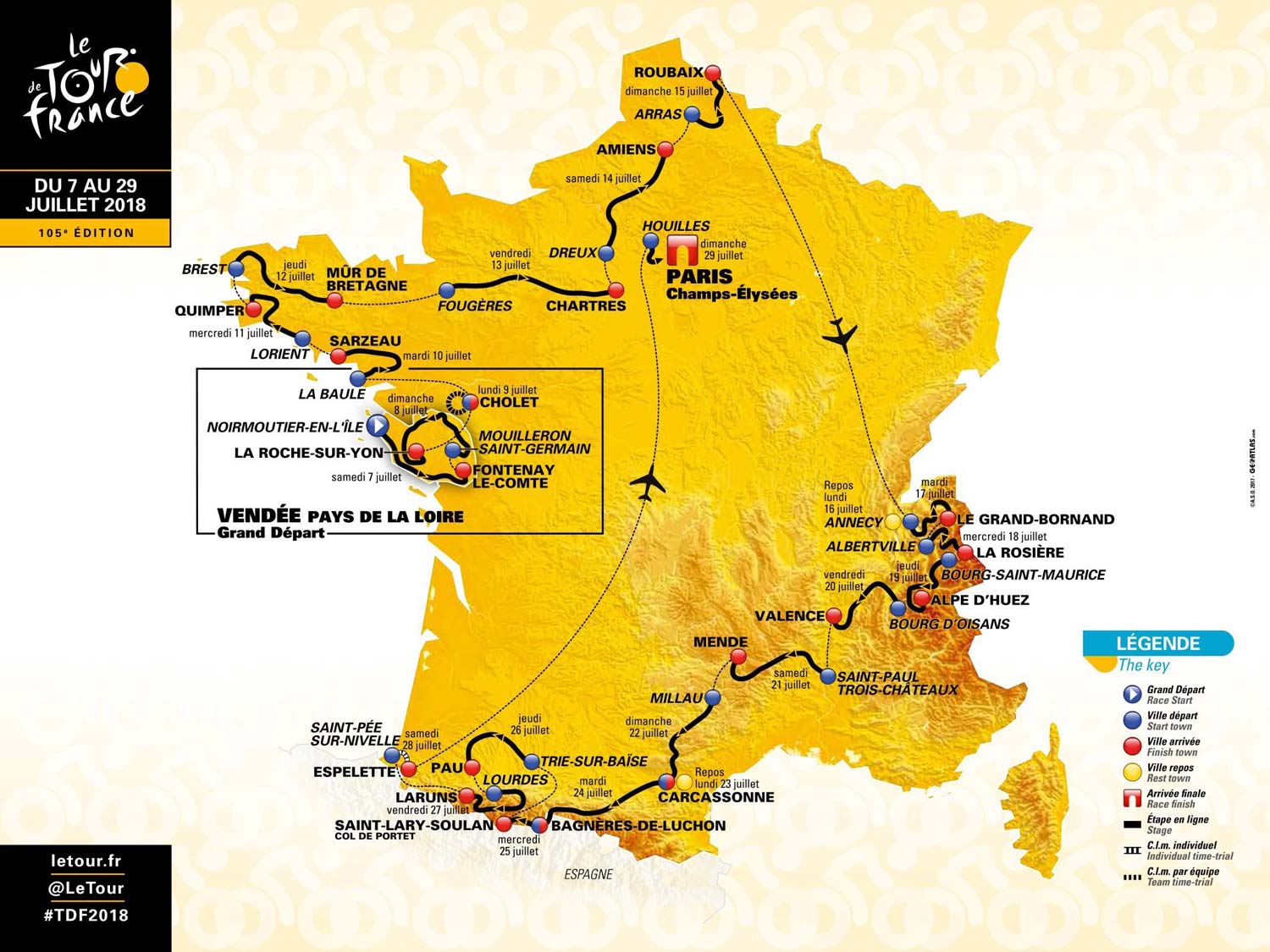 For full details of the Tour de France of 2018, visit the official site of the race: LeTour.fr

Yep, there’s plenty to talk about. And with that in mind, we got Stuart O’Grady on the line. As we spoke, we considered the map and his knowledge of the Tour (and France) and got him to offer his opinion.

O’Grady has won stages, worn the yellow and green jersey… he has participated in 17 successive Tours and lived in France for a large percentage of his life.

These days, O’Grady co-owns a café in Adelaide but he keeps his fingers in the cycling pie thanks to a close association with Mummu, the travel company that is the official holiday provider for the Tour de France.

Click the SoundCloud file below to listen to our discussion about the 105th Tour de France.

A race for Bardet?

Every year it’s assumed that the organisers are trying to map out a course for someone in particular. The 2016 runner-up and third place finisher in 2017, Romain Bardet, has said it suits him more than this year’s race.

Does O’Grady think the 105th Tour route is designed with him in mind?

“It’s designed to be as disruptive as possible to the Sky train, in a good kind of way,” said O’Grady.

“I’m not making it negative [but] I just think they’ve thrown everything on the table.

“We’ve got gravel mountain passes, a 65km mountain stage… it seems to be that they are trying to keep the race very exciting.”

A later start than recent Tours…

The Tour has traditionally begun on the first Saturday of July (or, in some cases, the final Saturday of June) but in 2018 it will move back a week.

The Grand Départ, in the Vendée, is on 7 July with a road stage. This will mean a crossover with the football World Cup in Russia for the opening nine days of Le Tour 2018.

Two massive sporting events on at the same time means competition for eyeballs and ratings… but the cycling will conclude around 5.30pm (in France) and the football matches are likely to begin in the evening.

Wind: a factor in the opening week

What the opening week lacks in climbing, it makes up for in intrigue about the potential of weather conditions. Wind and rain (and even heat) have had an influence in the north west of France in the past and O’Grady believes that the roads along the coast have the potential to shake things up.

“Stage one could be a beautiful sunny, lovely day or it could be an absolute nightmare.

“In that part of the world, you’re pretty much copping English weather… it could be blowing a gale and pelting rain.

“There’s 100km in stage one along the coastline – along cliffs.

“If you remember way back in the day, I was on the receiving end of a CSC/Discovery team attack (in 2005) that blew the peloton to pieces.

“It can be really deceiving.

“It will be in the hands of the weather gods.”

The pavé of stage nine

“It’s there’s one thing that everyone would have gone home talking about,” said O’Grady about the race from Arras to Roubaix, “it’s this stage. It’s absolutely insane.

“I’m laughing because I’m not riding it but to do 154km… with 15 sections and almost 22km of cobbles – that’s just going to cause so much stress for the teams.

“You can pretty much guarantee you, unfortunately, that a couple of guys are more than likely going to lose their Tour de France on that day…”

It’s not just the stones that make this difficult, it’s the lead-up to those sectors that are so celebrated because of races like Paris-Roubaix (which O’Grady won in 2007).

“Once you hit the cobbles, it’s actually quite simple: you’ve just got to ride over them as fast as you can. But it’s the fighting and everything that comes before it – it adds to the amount of stress.”

“It’s an absolutely horrifically hard stage. That’s just going to be an individual time trial. I can’t see it being anything other than that.

“We’ve never seen anything under 100km before, I don’t think…

“It was only a few years ago we were doing individual time trials of 65km – and this is a mountain stage!

“The Tour de France has got in its sight a stage that’s very short and intense.

“To be honest, I don’t think it’s going to change much at all,” said O’Grady of the reduced peloton, from nine-man teams down to eight in 2018.

– Listen to the full interview on RIDE Media’s SoundCloud channel – 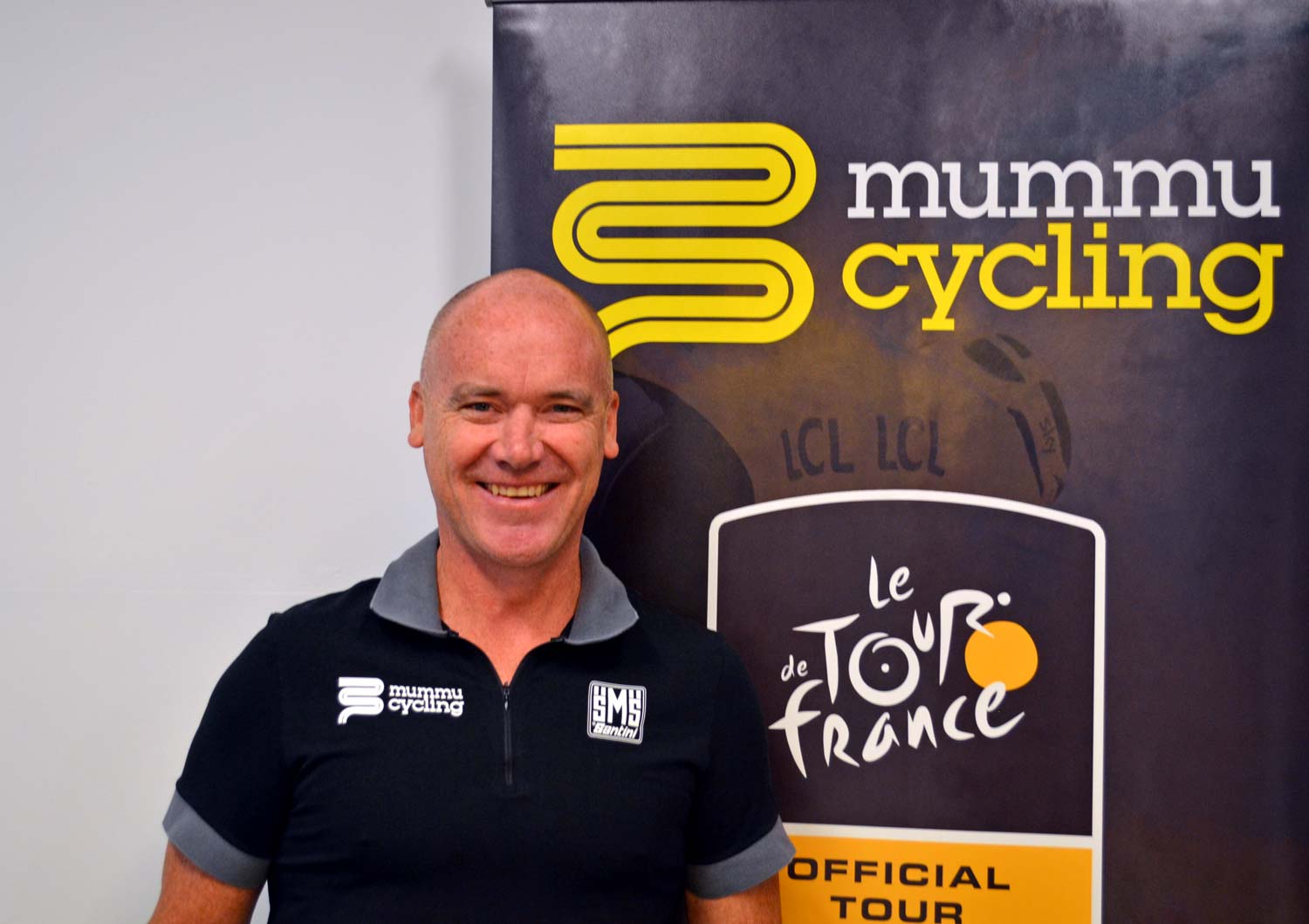