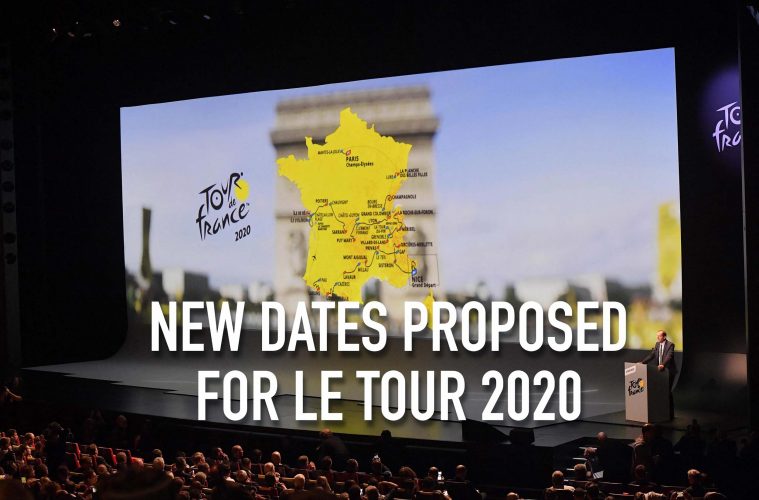 Of all major sporting events in 2020, one of the last to formalise amended plans for competition because of the COVID-19 pandemic is the Tour de France.

The race was originally due to start on 27 June and finish on 19 July; a meeting between the UCI and the ASO on Wednesday is expected to formalise a revised date, with the intentions of a Grand Départ in Nice on 29 August, with the finish in Paris expected to be 20 September.

Many sports were quick to announce dramatic changes to competition schedules when the lockdown measures and actions to limit the spread of COVID-19 were put into action. Cycling has been no different, with one major exception: the Tour de France.

While all bike racing has been cancelled or postponed since mid-March 2020, the biggest event in the sport has not made any formal declarations about a change of date but this is expected to come as early as tomorrow.

Widely regarded as the world’s biggest annual sporting event, the Tour has a history dating back to 1903.

There has been minimal communication to date about how the organisers of the Tour, Amaury Sport Organisation (ASO), is planning to host the 107th Tour de France in 2020.

At the end March, race director Christian Prudhomme ruled out the possibility of staging the Tour this year on a compromised, shorter route or in less than the traditional three-week duration.

The intention had been to delay making any formal statement about amendments to the proposed dates until 15 May but recent declarations from the President of France, Emmanuel Macron, have forced the ASO to reconsider these plans.

In a televised speech on Monday, Macron stated that “major festivals and events with a large audience will not be able to be held at least until mid-July”. Any assumptions that the Tour would somehow be immune to these restrictions are now essentially void.

On Wednesday, when the UCI and ASO are expected to formalise proposed new dates for Le Tour 2020, it would have been 72 days until the first of 21 stages that make up the route from Nice to Paris.

If the proposed new dates are formalised, there will be 135 days until stage one of Le Tour 2020.

With a start on the Côte d’Azur and a zig-zagging itinerary steering the peloton to the Pyrenees in the west, before turning north and crossing back to the Alps in the east via the Massif Central, the Tour of 2020 was to conclude with a steep time trial to La Planches des Belles Filles on the final Saturday, followed by the procession stage to Paris.

No route of the Tour de France is ever the same, so any amendment to the complicated puzzle requires enormous planning. When the organisers also have to take into account the possibility of date clashes with other events, it becomes considerably more complex.

Even with the proposed new dates, there is a likely crossover of key races: the final stage of Le Tour and the UCI world championships.

The elite men’s individual time trial at the worlds of 2020 has been scheduled to open the championships in Aigle, Switzerland on 20 September, when the ASO is hoping to close down the streets of Paris for the final stage of the (altered) Tour de France.

We can safely assume that the discussions between ASO and the UCI on Wednesday will take this clash of dates into consideration.

The news of a possible date alteration for the Tour opens up a range of related conversation topics but the view of many in the pro cycling community is that the Tour de France should receive priority over all other events.

Before any sporting event can realistically proceed, however, authorities must be satisfied that the pandemic has been appropriately contained. And this is another huge assumption; in April 2020 – with much of the world in shutdown, restrictions in place for exercise, and movement severely limited – there is no way of knowing what things will be like in August.

France’s exposure to COVID-19 has been significant with the country recently recording over 100,000 confirmed cases, with almost 16,000 deaths associated to the virus.

A bike race, as significant as it may be, is not a priority in the broader scheme of things but the proposed date change does at least provide a degree of clarity for the thousands who are associated with the Tour.

We wait to see if the late-August start date is formalised on Wednesday (European time).

If it does get shunted along the calendar by 63 days, it will easily be the latest start the Tour has had.

The original date for this year’s Tour de France had been brought forward a week to accommodate for the expectation of an Olympics in Tokyo starting at the end of July.

The IOC realised weeks ago that changes needed to be made and a postponement was duly announced. Now, we wait to see what will come of the Tour in 2020. Whatever happens, it’s going to be an entirely different contest to the one that was due to start in June.

NOTE: RIDE Media is the publisher of the Official Tour de France Guide, produced in association with ASO and L’Equipe each year. We have temporarily suspended pre-orders for the 2020 edition until receiving confirmation from ASO about this future of this year’s race.