2021: new year, new approach to a season without the Tour Down Under

January 4, 2021
The festive season of 2020 is behind us and it’s time to get into action again. A new year brings with it a new approach.

– By Rob Arnold
For the first time since 1999, there’ll be no trip to South Australia for me this summer. You know the reason why: no Tour Down Under and restrictions on travel because of the pandemic mean that an annual tradition will be broken in 2021.

Of course, there is still going to be a ‘festival of cycling’ in Adelaide and surrounds, but exactly who is able to attend remains a work-in-progress. When the concept was first announced late last year, it seemed plausible that tourists – from around Australia at least – would once again be able to travel to South Australia, even though the WorldTour stage race isn’t going to be contested there in 2021. Then came another COVID wave, and you know the rest of the story.

Since 1999, the Tour Down Under has provided a catalyst for action once the festive season comes to an end. At the core of it has been a race which serves as the foundation for a reunion of sorts for many in the cycling realm, not just competitors and team staff but also the media and industry people. 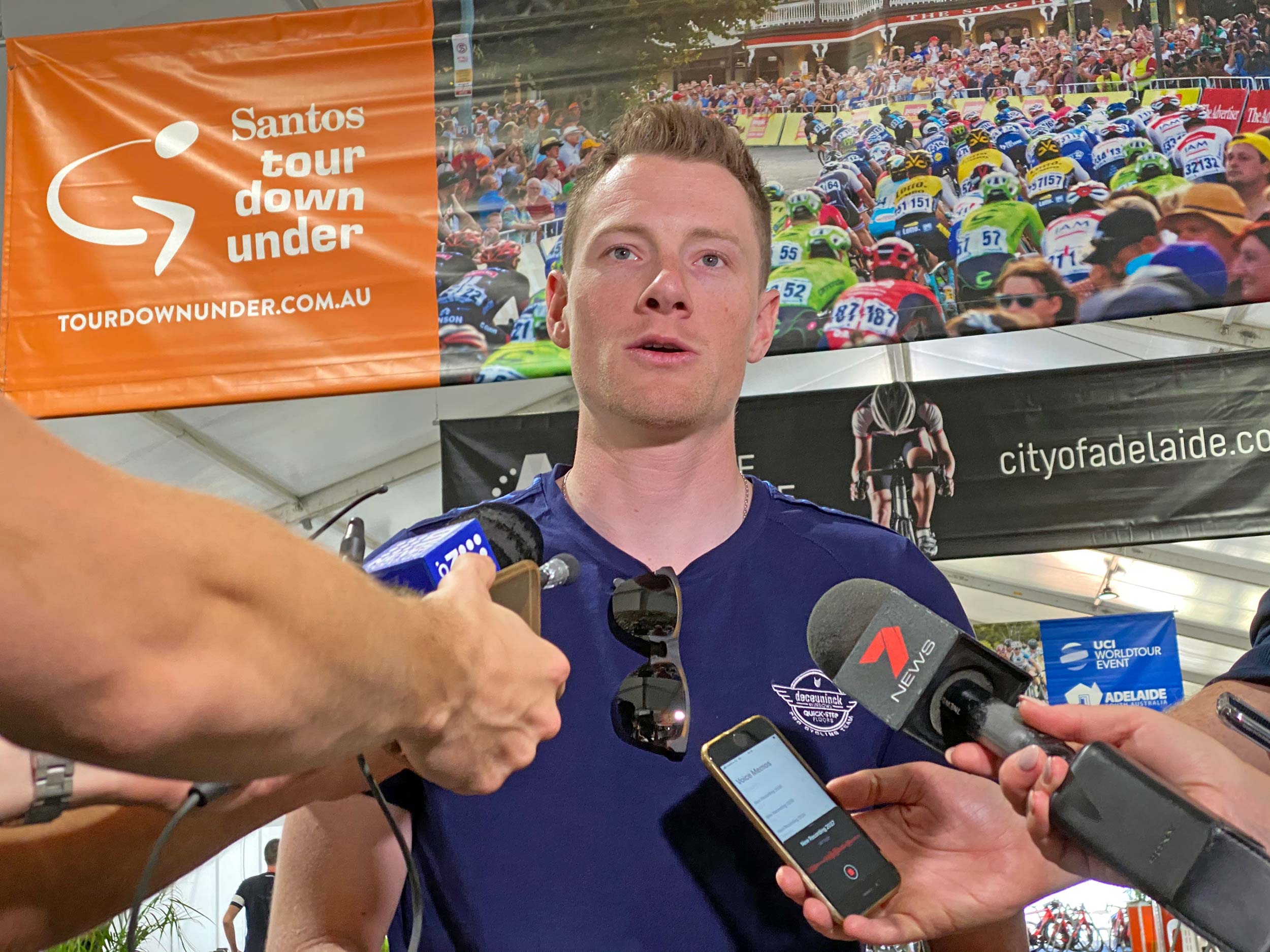 Sam Bennett got the 2020 WorldTour season off to a great start with a win in stage one of the Santos Tour Down Under. Alas, he and many other internationals won’t be back in Adelaide in 2021. (Photo: Rob Arnold)

With the Adelaide Hilton and the expo area at Victoria Square, just out the front of the hotel, serving as the hub for the TDU and associated events, it’s been relatively easy to get back into the swing of work shortly after the dawn of a new year. In 2021, it’ll be different.

Instead of doing interviews, photographing and filming bikes and cycling equipment, riding in team cars and watching a bike race, I’ll be riding in Sydney and wondering what will become of the second season interrupted by the pandemic. 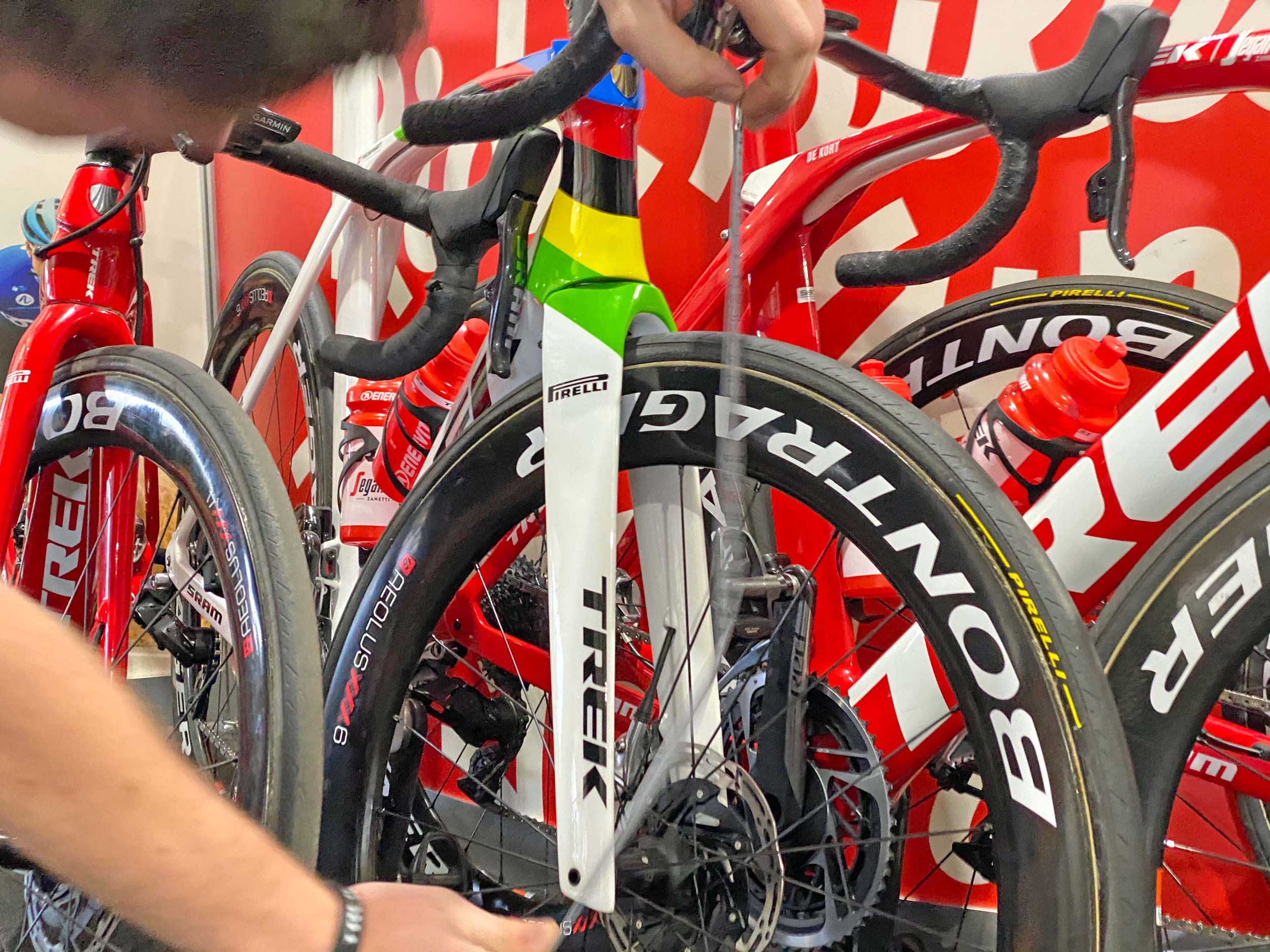 Frankly, there’s a sense of apprehension; although racing in 2020 was heavily compromised, many events were still contested, and the pro cycling scene limped through the year as best it could. There were competitions – indoors and online at first, and then back on the roads of Europe… a little bit like it was before, only without the carnival atmosphere and excitement that come from mass gatherings and the rhythm of a traditional racing season.

Alas, there’s little to suggest that 2021 will be anything close to normal even if many involved in pro cycling are putting on a brave face and behaving as though sport will return to what we knew it to be before the pandemic.

There has been a flurry of activity about pro cycling on social media in recent days. With a new year comes new team colours, rider transfers, equipment changes and the sense of a restart.

Some teams are showing off new bikes. Some riders are posting clips of their new kit. Some journalists are previewing what is hoped of the season. And some companies are sharing images of their new-season releases. But it’s not creating a coherent buzz.

There’s no Bay Series criteriums, no hype about the pending national championships (which have been shunted to February, with a hope that all will be ‘normal’ enough for competitors to get to Buninyong to race for a green-and-gold jersey), and only tentative travel plans for just about everyone involved – riders, team staff, media and industry people. 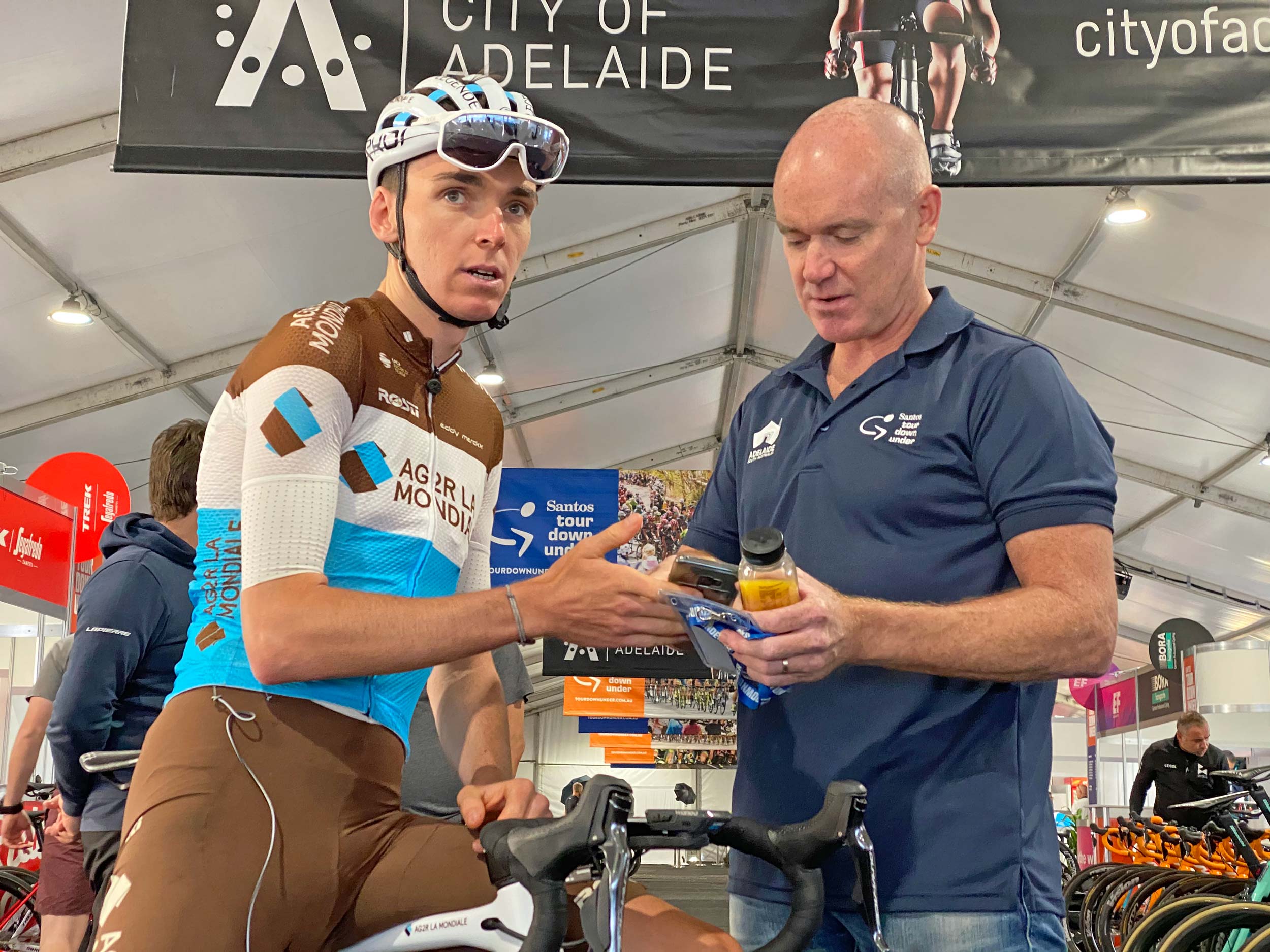 Romain Bardet and Stuart O’Grady before the TDU of 2020. We’ll have to wait a little longer than last year to see the new-season team colours and O’Grady will have to wait at least another season before making his debut as director of the Tour Down Under. (Photo: Rob Arnold)

We now know how quickly and dramatically things can change because of a few positive tests for COVID. And so, we adjust our schedules accordingly, often with only a few hours’ notice before cancellations and/or amendments are applied.

Personally, the cancellation of the TDU equates to a dramatic change, but we each find our way to cope. For many of us, one thing isn’t different: we continue to ride our bikes and enjoy the benefits that come from the act of pedalling. Only now, it’s a little more personal.

Instead of amassing in crowds to cheer on an international peloton in a world-class event, we’re clipping into the pedals and trying to find safe routes around our towns and cities, riding for personal reasons, and clocking up a few kilometres in the Australian summertime. 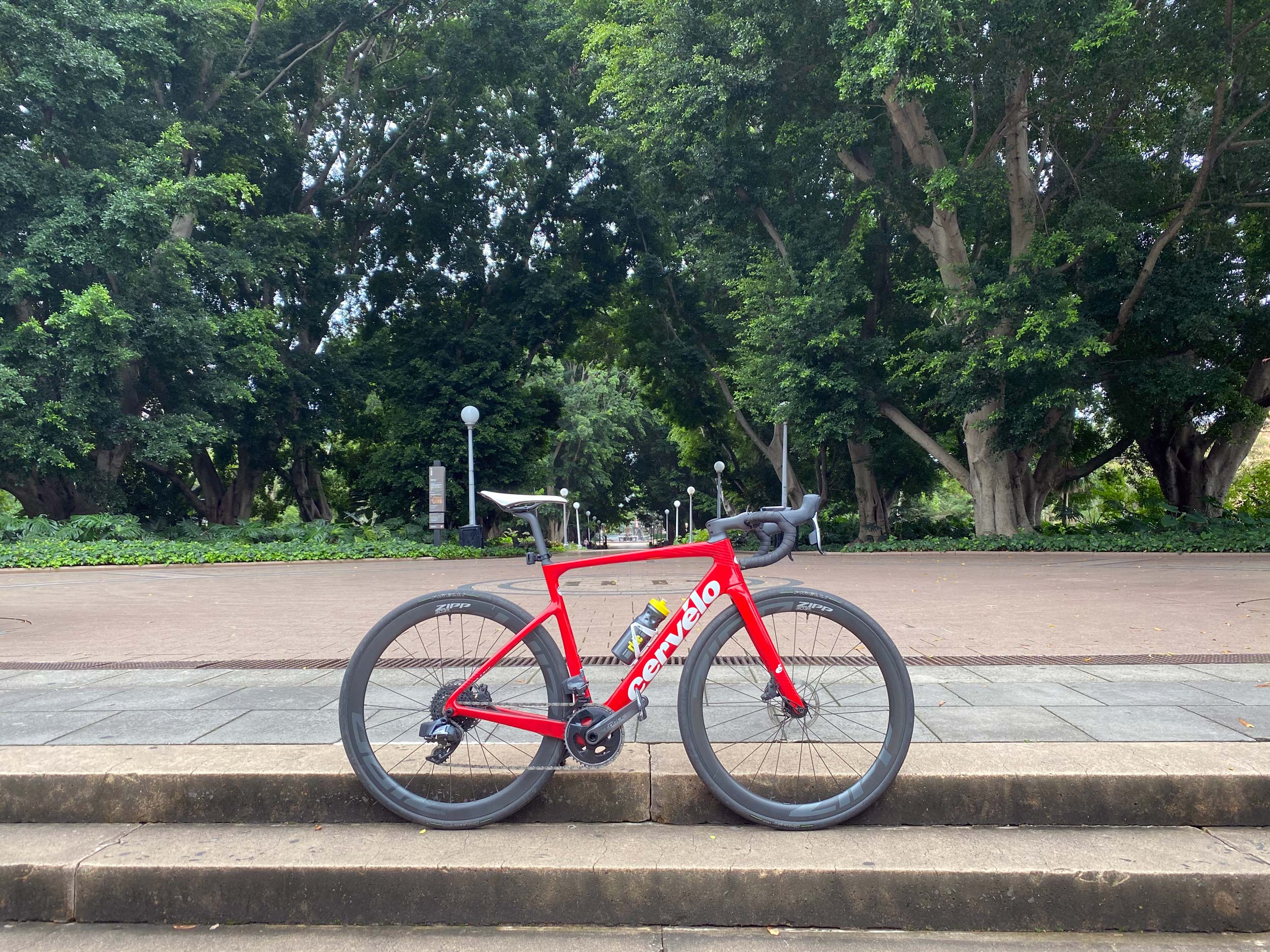 There was another wave of COVID positives in Sydney in December and, on the first day of 2021, the streets were largely void of traffic… or even pedestrians. (Photo: Rob Arnold)

Over the past few months, when there’s been a lot of riding time, good weather and the ability to move around without too much concern about COVID in Sydney (and surrounds), I’ve been on the bike.

As well as getting fit and cycling more than I have in many years, I’ve also been collecting content. Some of it has already been posted (on this site, or via RIDE Media’s social media channels), but much more is yet to be broadcast.

There are interviews and product reviews, stories about new places to ride and rants about what comes to mind while riding.

With a new year upon us, and the holidays effectively over, it’s back to the office chair and time in front of the computer. I’ve got a load of footage to edit, and a range of products that I’ve been testing. There are features about bikes, rides, riders, and even a car review or two…

RIDE Media has new office space with a bright studio and fresh motivation. The time on the bike has served me well and I’ve got renewed energy to keep doing what I’ve done for quite some time now: share stories about cycling.

This will mark my 30th year as a cycling media professional, and I hope you’ll continue to share with me a journey that has no finishline in sight.

It’s a pleasure to report on cycling but in 2021 it has to be done differently to what I’ve grown accustomed to. The content on RIDE Media might not be as much about racing as you’re used to, but that doesn’t mean there’s nothing to say… rather, it opens things up for some versatility and creativity.

Regularity without a schedule

RIDE Media has never pretended to be a news site. Founded in 1998, my company has always covered cycling but from a different angle.

If you want race results, you know where to go. If you want updates on riders or teams or events, you can no go straight to the source and follow your favourites on social media.

There’s little point in repeating press releases and although it’s far more difficult to conjure original content, that remains the quest on this site (and our associated social media channels).

I love cycling but that doesn’t mean I need to read about it every day, especially when there’s no real news and nothing to report on. With this in mind, I’m taking a step back and will be avoiding the quest for content for the sake of content: when there’s something to say, I’ll say it… but when it’s a slow news day, I’m not going to eke out stories that don’t exist.

Soon, there will again be a steady flow of features (from the vast amount of content collected in recent months), the themes will vary as will the delivery mechanism – sometimes there’ll be written articles, other times image galleries and, more increasingly, there’ll be videos on the RIDE Media YouTube channel.

You’ll see some articles from the past (as I delve into the vast archive of material that has amassed in the 22 years of RIDE Media) and there will be stuff about the season that lies ahead.

And, of course, RIDE Media will once again be publishing the Official Tour de France Guide (Australian edition) as it has done since 2003. But before production on that big, popular magazine commences, there are a few months of curiosity ahead as we race into the great unknown of pro cycling in 2021.

Although I’ve been doing this for a long time already, there’s always more to say about cycling. And now that I’m riding more than before, my enthusiasm is high. I’m motivated, rested and ready to do my job. And although it’s work, I’m going to continue enjoying it, while relishing the reality that there are more bike riders in Australia than ever before.

The pandemic is a curse that has prompted many changes we’d all rather live without, but one good thing to come from it is the fact that people who had previously not considered cycling are trying it out… and realising how wonderful the cycling life can be.

Thanks for joining me on a ride that has a new direction in 2021, one that is already different but one that also promises to be enjoyable.