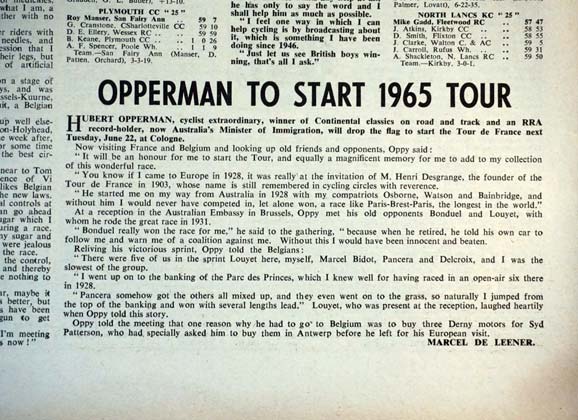 Curiosity sent me upstairs and into the archives at RIDE Media HQ where there’s a collection of ‘Cycling‘ magazines dating back to 1951. The premise was simple: find the issue of this weekly British magazine from 50 years ago and read about what was being written about in June 1965. After dusting off the relevant folder and flicking through to find ‘June 19’, I was greeted by a headline that we’ve long been accustomed to seeing – “Tour Doping…” The full report inside revealed more: “Dope! Milk Race goes sour!”

It’s been a little while since a major scandal in cycling but clearly the scourge of doping has been part of the sport’s rich history for some time. That’s no surprise but it was an interesting coincidence that the first time I’d opted to delve into the dusty collection of magazines for a bit of frivolity – the sake of a ‘Friday Flashback’ – the topic was on the front page. 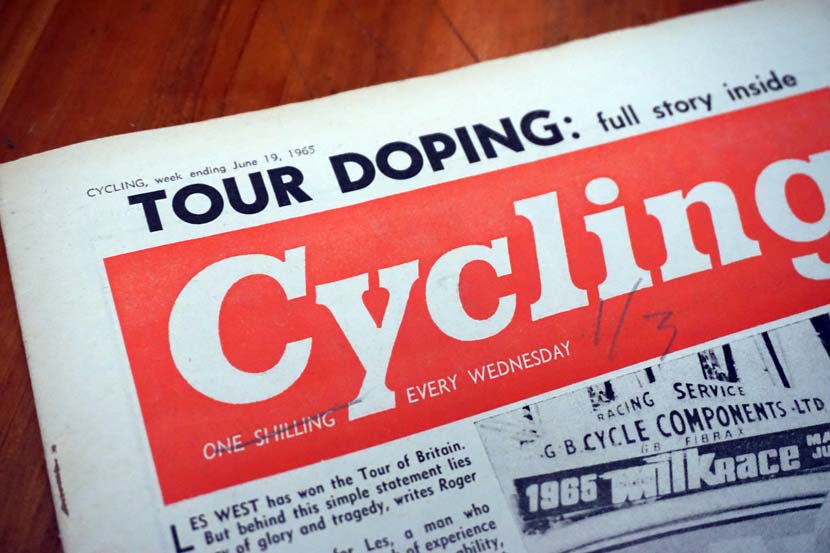 The editorial by Alan Gayfer queries what readers consider doping to be. “Is that cup of tea (with its caffeine content) that you have before a time trial dope? Is the beer that you had the night before to help you sleep soundly, dope? And what about those glucose tablets?” He goes on to add, “the issue at odds here is that all the riders knew and signed beforehand the agreement which categorically forbade them to use stimulants, in the same way that it forbade them to use a fixed wheel.”

And then he duly switches topic and goes on to thank the police for their wonderful support of the two-week Milk Race.

The doping was, of course, amphetamine and Luis Pedros Sanamarina, Salvador Canet and Angelo Utsamentiaga of Spain and Ken Hill of Britain were found to have traces in urine samples collected by the Institute of Sports Medicine. The opening line of the report suggested “life suspension” would be possible…

Other features in the magazine included an item by Marcel de Leener stating that Australia’s Hubert Opperman would start the 1965 Tour de France… not as a rider but as the Australian Minister for Immigration. He was visiting France and Belgium and he was given the honour dropping the flag to start the Tour in Cologne on 22 June 1965. 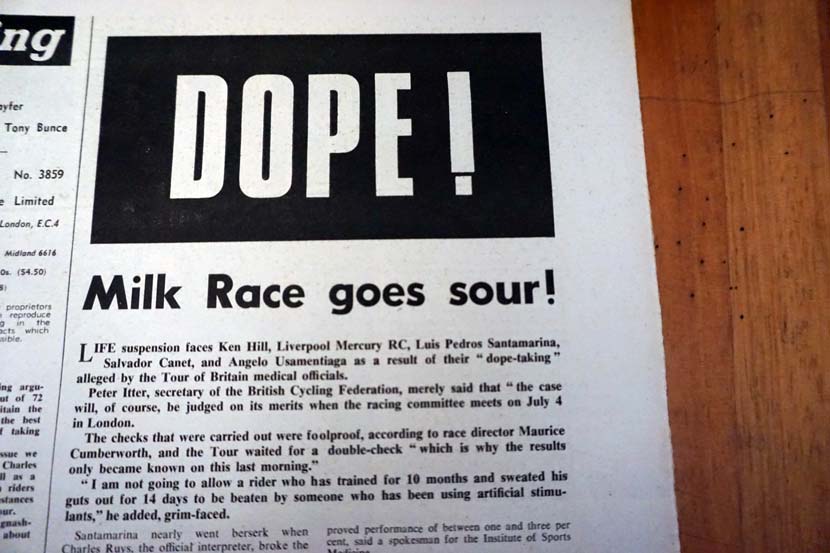 Positive for amphetamine… the scandal that rocked the British Milk Race 50 years ago. 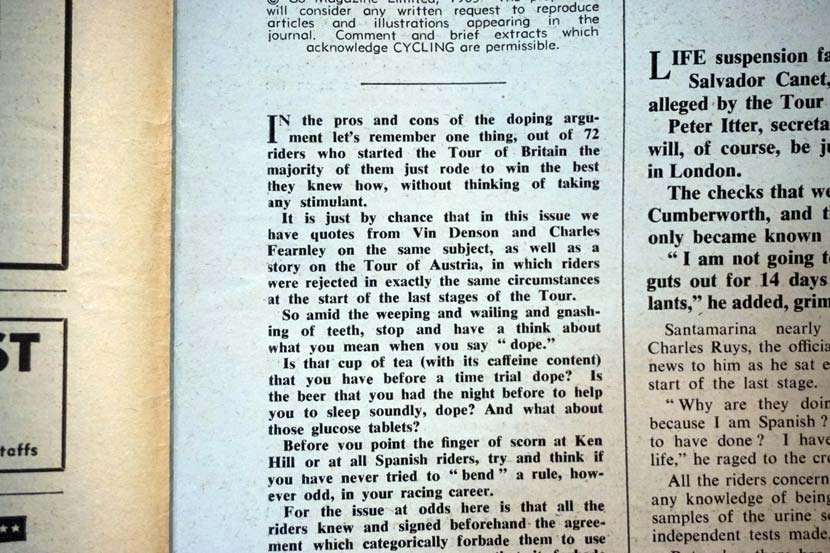 The opening lines of the editorial of the 19 June edition of ‘Cycling’ from 1965. 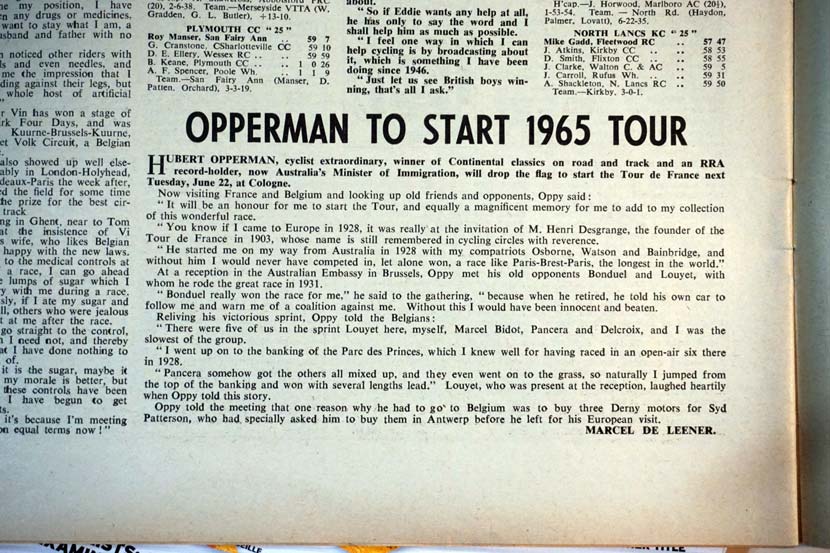 Australian political representation at the Tour de France 50 years ago… 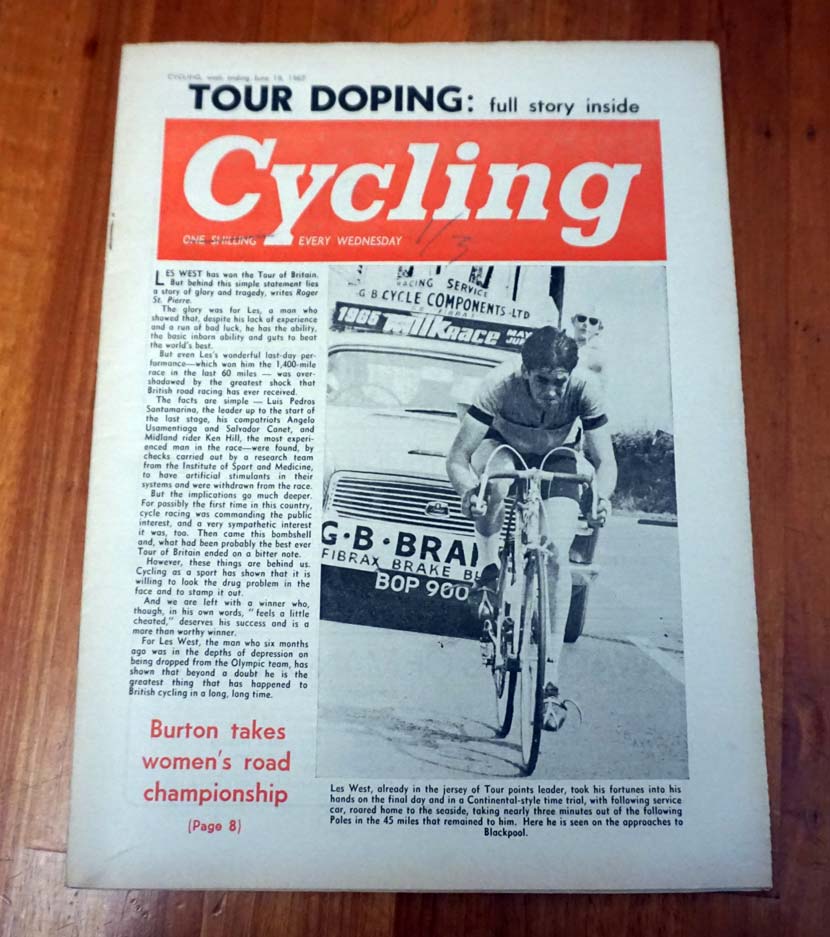