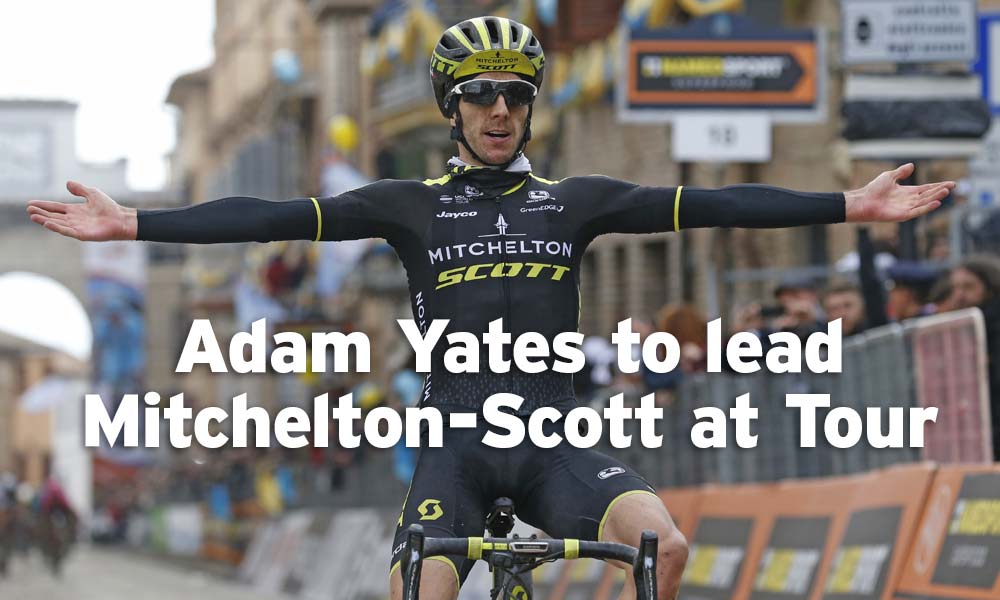 A change of plans: Mitchelton-Scott will be racing for Adam Yates at the Tour de France. Well, this isn’t an entirely new concept but the Brit is now the focus of the Australian team rather than splitting duties with sprinter Caleb Ewan…

It seemed a little odd really. Mitchelton-Scott issued a press release on 13 December 2017 about a race in July 2018. “Ewan to make Tour de France debut in 2018,” was the headline. Ah, sorry folks. False start. That’s no longer the case.

This evening it was announced that priorities have changed and rather than Mitchelton-Scott having a two-pronged attack at the Tour in 2018 – one leader going for sprint wins, another aiming for a good GC result – it’s now all for Adam Yates.

Sorry Caleb, no Tour for you!

The official line is, of course, a little different: “Original plans were to split the Tour de France team between GC and sprint ambitions with Caleb Ewan,” reads the team release from 21 June 2018. “However, this season’s results have seen the high-performance team throw their support behind Yates as sole leader for the Tour de France with ambitions for results across all three weeks of the Tour.”

Never mind the fact that it is becoming more and more apparent that “the sprinter” is moving on. Yes, Ewan has been strongly linked with another team but hey, it’s not officially the transfer season so to name the other team would be premature at this point. Wouldn’t it?

RIDE Media tried to contact Ewan for comment shortly after receiving news of his non-inclusion in the Australian team for the Tour which begins on 7 July but he wasn’t available for comment. 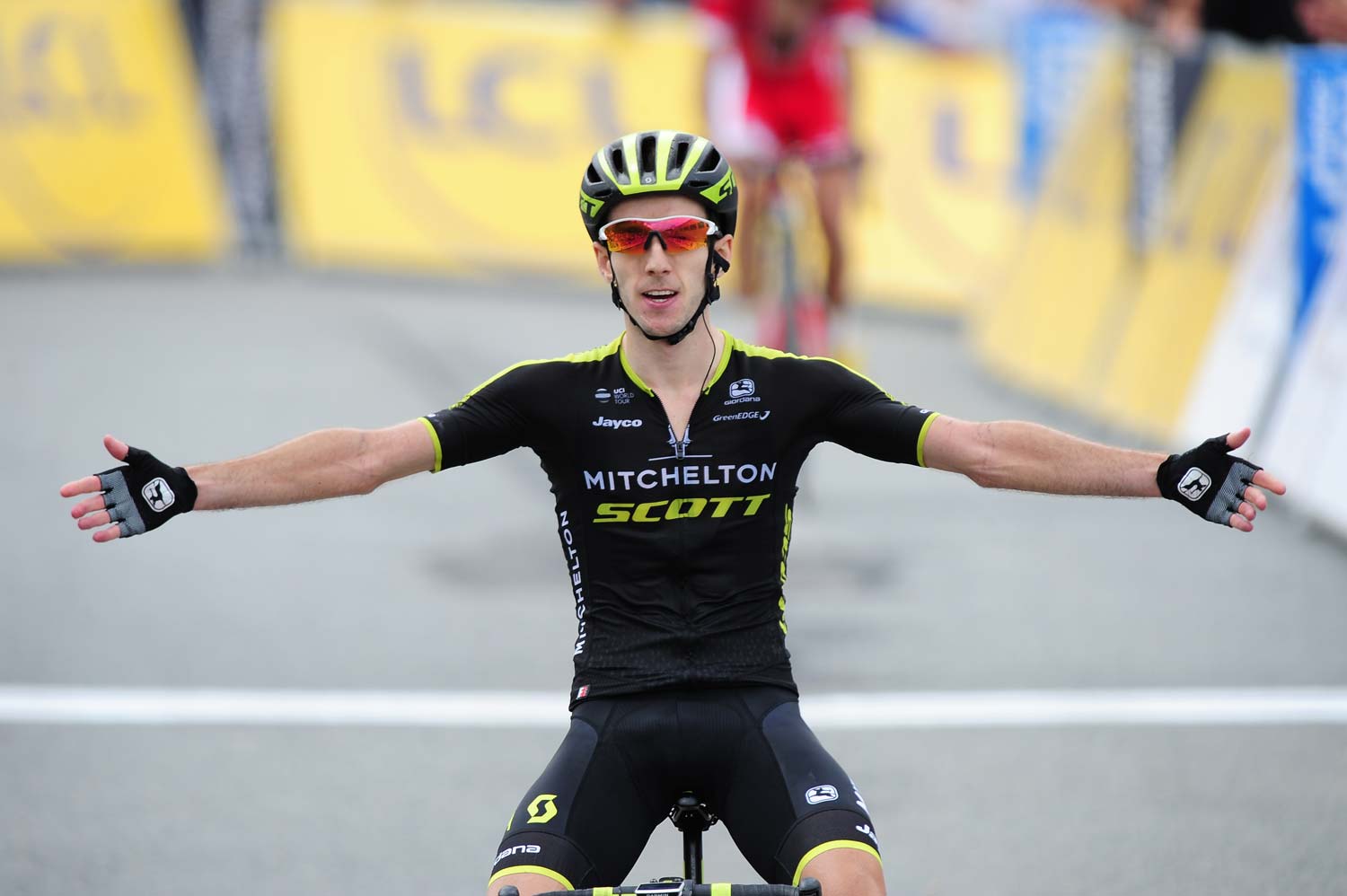 Devastated is an understatement of how I feel about @Mitchelton_Scott’s decision to leave me at home this July. I was on track to being more than ready for my TDF debut. So much hard work has gone into this from my sprint team and I to be ready for our big goal this year.

If you saw the way Adam Yates won his stage at the Dauphiné (above) you wouldn’t be surprised that his team has had a change of heart… he will now be the only leader of Mitchelton-Scott at the 2018 Tour de France.

All this brings us to the actual news of the announcement, the line-up that will in fact be representing Mitchelton-Scott in July.

In alphabetical order, the eight are: 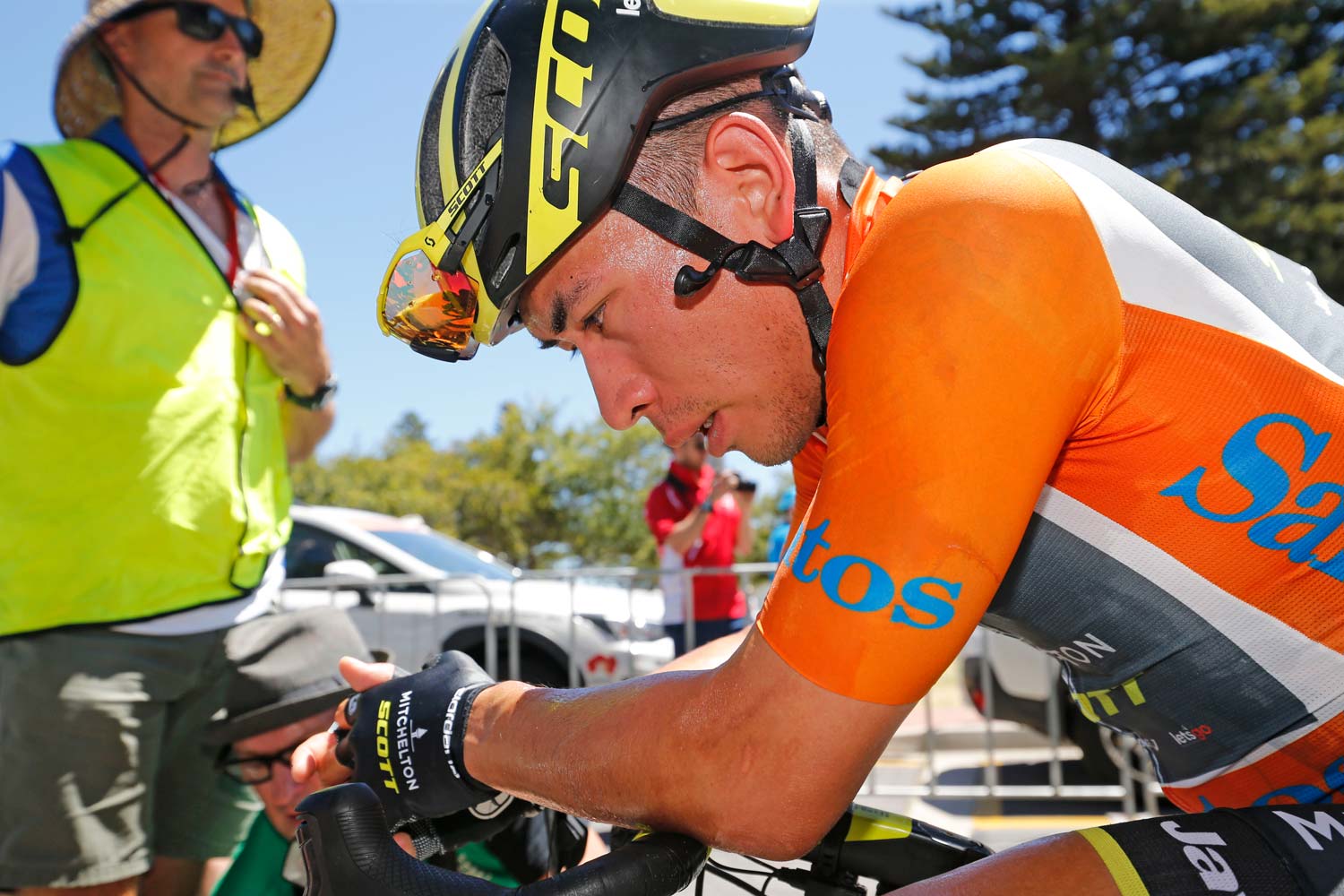 From leader to… non-inclusion. Caleb Ewan (above) not part of the eight-man line-up for July. 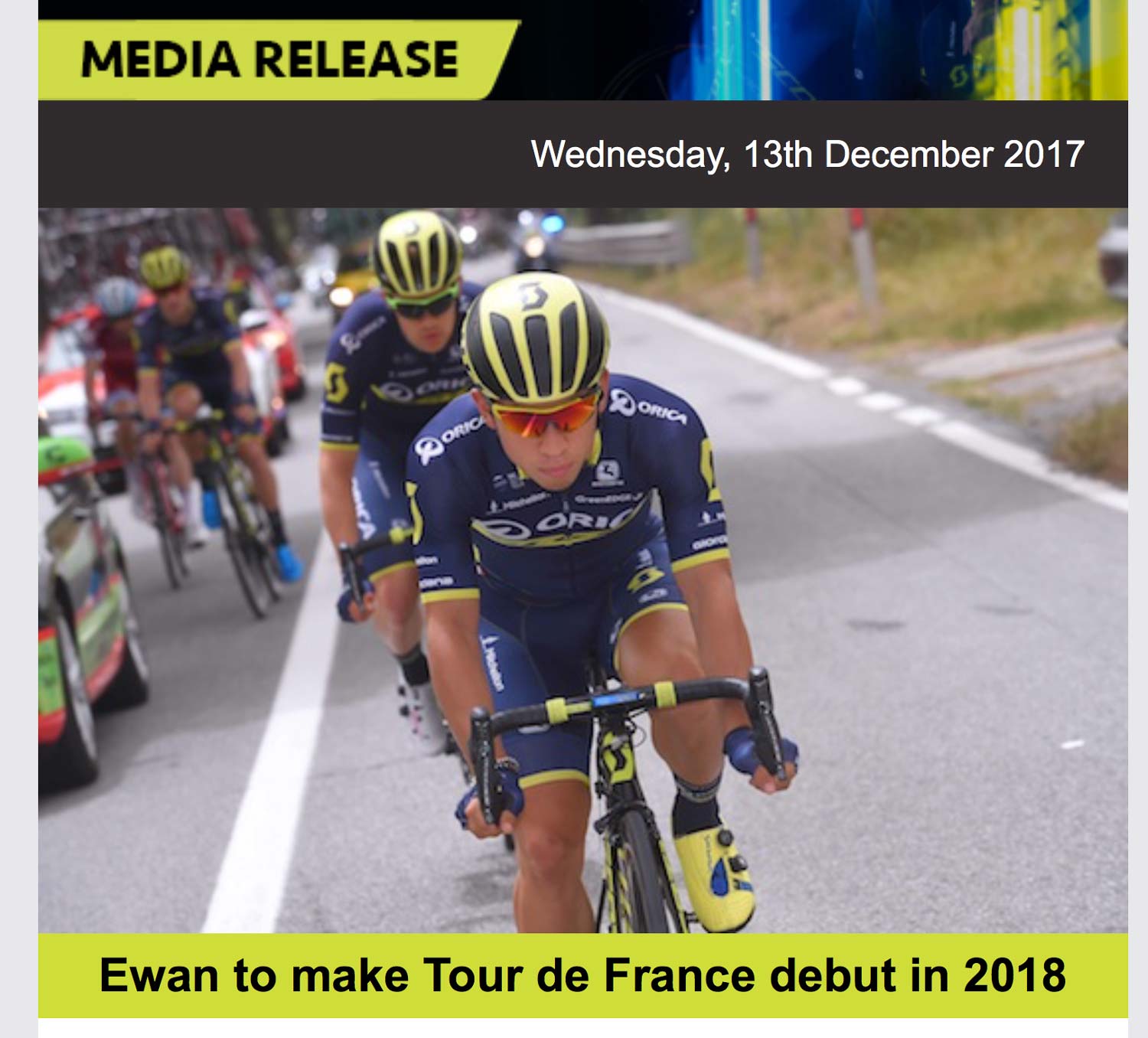 Okay then, let’s revise that story that features in the Official Tour de France Guide (Australian edition) and provide a little overview of the new format team…

What was originally going to be a team chasing a mix of objectives has become one that is now striving to win the yellow jersey. After an amazing fortnight at the Giro d’Italia when Simon Yates wore the leader’s jersey for 13 days and won three stages (while team-mates Esteban Chaves and Mikel Nieve also picked up a couple of stage wins), the Australian team is committed to another crack at the GC of a Grand Tour.

“The team will be built around 2016 Tour de France best young rider and fourth-place getter Adam Yates,” says Mitchelton-Scott, “with a diverse team of specialists to guide the 25-year-old through a dangerous and unpredictable first nine days before the climbers come to the fore in the mountains.”

So, we’ll see the likes of Bauer, Durbridge, Hayman and Hepburn doing the grunt work on the flat (and, of course, in the TTT of stage three) with ‘Heppy’ to be the Tour debutant of that quartet in 2018.

When it gets steep, there’s the maestro who helped Chaves to a podium position at the Giro d’Italia in 2016, Damien Howson as well as Nieve who, judging on his Giro form this May, is going to be a strong asset.

Meanwhile Daryl Impey slots in to the mix as a versatile sprinter (who surprised himself with a stage win at the Dauphiné in June). He won the green jersey at the French race and, at the age of 33, seems to be enjoying one of his best seasons in a while.

Suddenly the team time trial has become a far more important stage than it was only a few hours ago. The Australian team holds the record for the fastest average speed of a TTT at the Tour and there’s a strong chance that another victory awaits in Cholet… and, with that, the chance of another visit to the podium to collect a yellow jersey in the opening week.

Whatever the outcome, it’s a different scenario now than what was announced last December. Is there any surprise about that? No, not really. This is pro cycling… just because news is issued by a team six months ago, it doesn’t mean it can remain the same half a year later. Form changes. Priorities shift… and, quite possibly, agreements with new teams are reached.

We can safely assume that Caleb Ewan will indeed get to race the Tour in the coming years but it won’t happen in 2018 and it probably won’t happen with the team he’s been racing with since 2015.