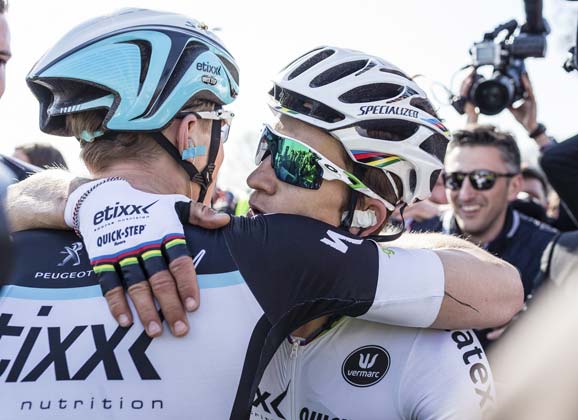 It may be known as the flat country but there are hills in the Netherlands and, for cycling aficionados, there’s one in particular that gets plenty of attention: the Cauberg. This is the feature of the finish of the Amstel Gold Race, the 50-year-old Dutch Classic that was contested on Sunday 19 April. It would end with a rainbow salute – the world champion Michal Kwiatkowski first over the line! The Spanish veteran Alejandro Valverde claimed the runner-up spot while Australia’s Michael Matthews rounded out the podium.

The Cauberg really is Philippe Gilbert’s hill. It was here that the Belgium won his world title (in 2012)… as well as three titles of the Amstel Gold Race (2010, 2011 and 2014). The BMC rider would try again and, despite his might, he wouldn’t be able to drop the shadow from Orica-GreenEdge – Matthews was solid on the climb and exhausted in the sprint but he still managed to claim another podium place in a Classic, his second this year (after Milan-San Remo in March).

Click the photo below to begin a slideshow of 34 photos from the 2015 Amstel Gold Race by Wei Yuet Wong.