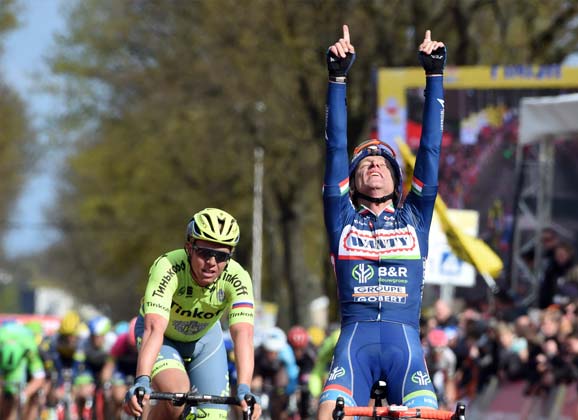 Amstel Gold Race: the win that got away

Three cheers for Enrico Gasparotto, a multiple winner of the Amstel Gold Race. His victory is one for the underdogs, the wildcards… and for a team in dire need of something good. But, for Australian cycling fans, the race raised an old topic: why can’t Michael Matthews and Simon Gerrans race together instead of against each other? 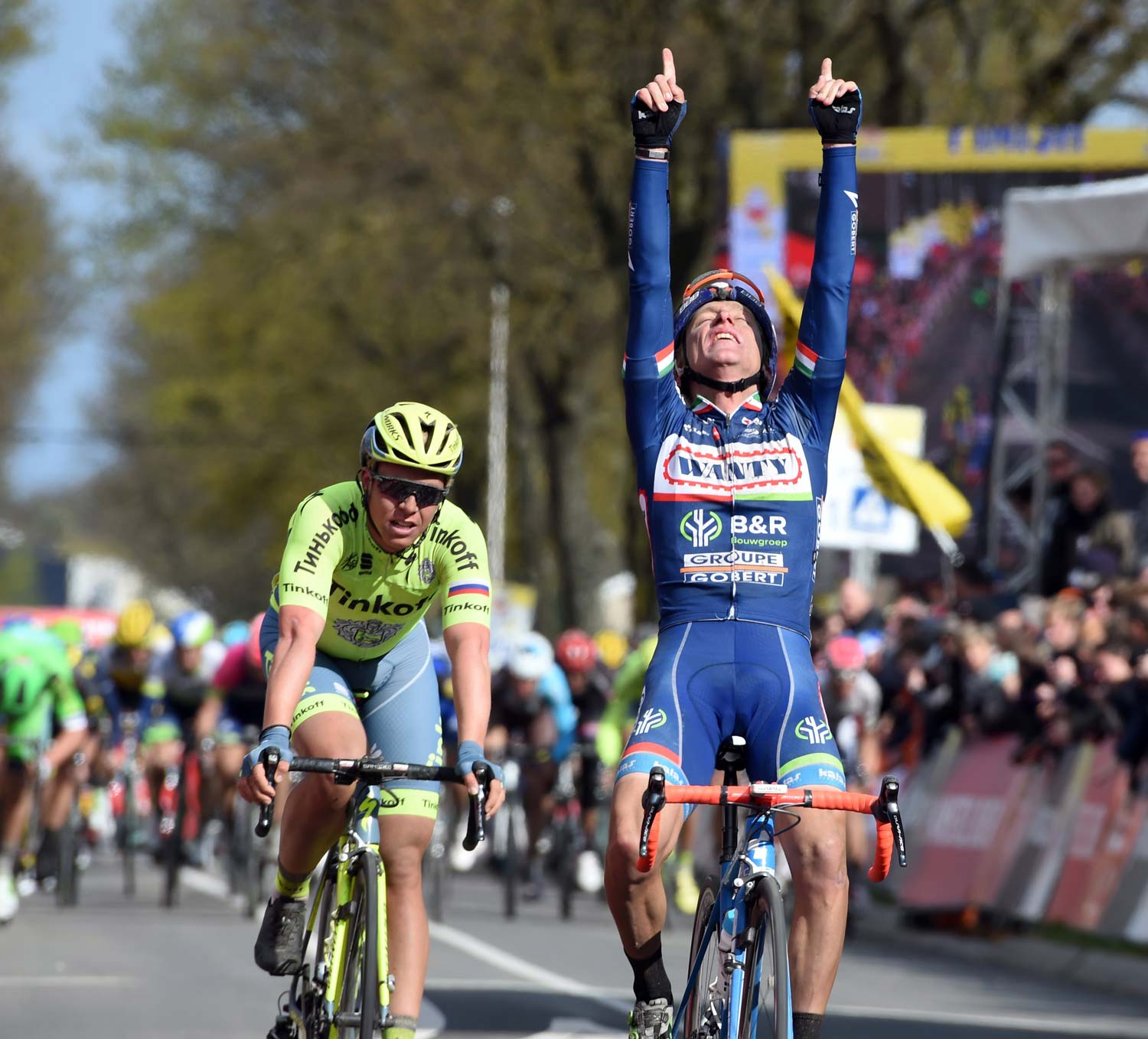 Enrico Gasparotto delivers the win that Wanty-Groupe Gobert so desperately needed. This was one for Antoine!
Photo: Graham Watson

We’ve seen an emotional finish of the only Dutch round of the WorldTour with Enrico Gasparotto claiming the best result ever for his Wanty-Groupe Gobert team. Fingers pointed to the heavens in salute, everyone who follows cycling knows who the Italian was thinking of when he crossed the finish line just ahead of Michael Valgren.

This was a win for Antoine Demoitie.

A wildcard team with a brilliant result.

Gasparotto has been there and done it before: first in 2012 while racing with Astana, the former Italian champion took lessons from his previous success.

Click down to the inner ring, get up the climb, contemplate the sprint. It was the 39-tooth chainring that he references afterwards but we were all thinking of his former team-mate who lost his life during Gent-Wevelgem three weeks earlier. 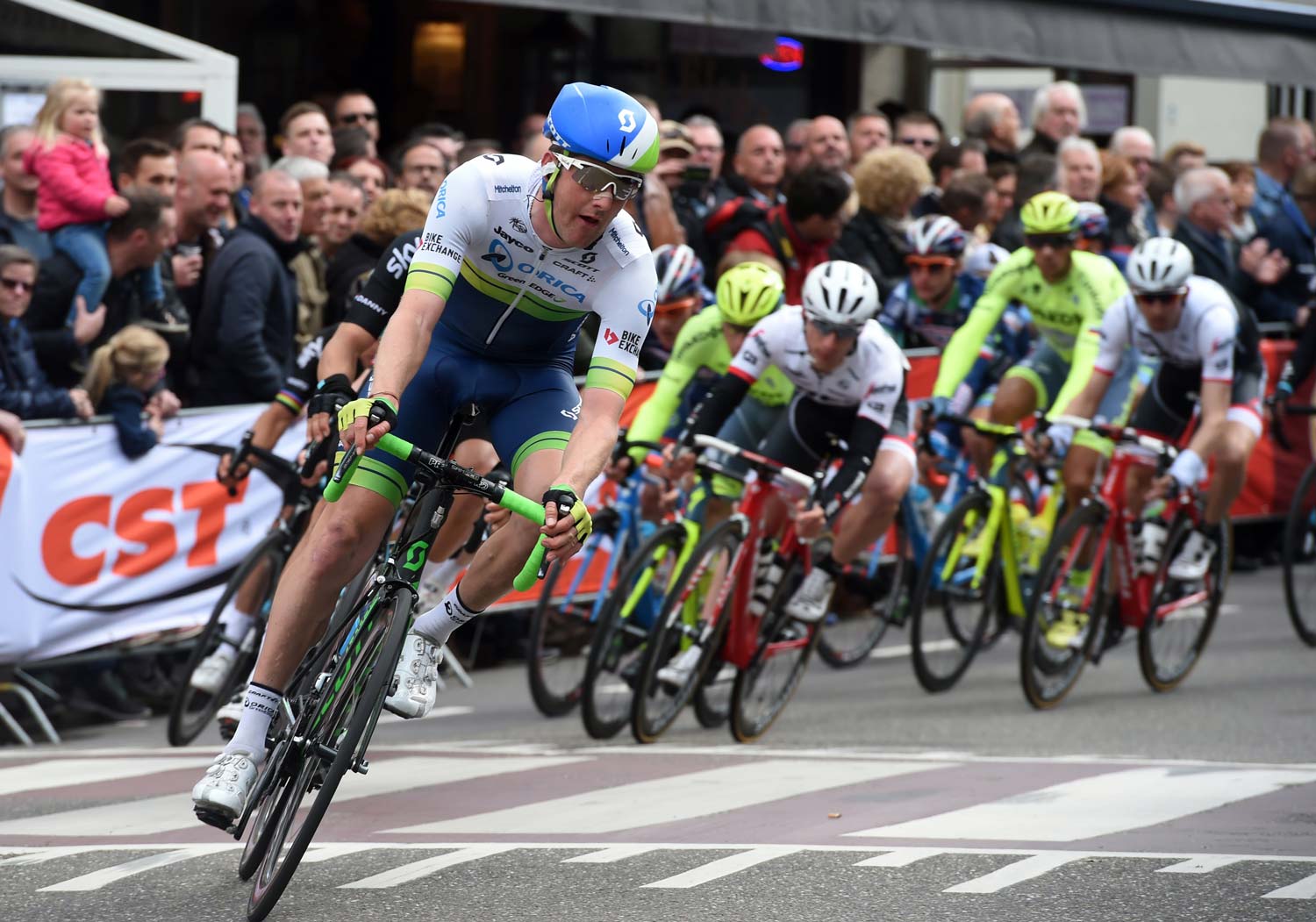 Luke Durbridge spent a solid stint at the front of the peloton on Sunday. He was one member of a committed Orica-GreenEdge team that was racing for… ah, two leaders.
Photo: Graham Watson

It’s a giddy ride to the Cauberg. Even from the lounge, it’s easy to get disorientated by the twists and turns of this complicated route in Limburg. The Amstel Gold Race has become a Classic but it’s one of few that’s named after a sponsor.

The Omloop Het Volk would later become Omloop Het Nieuwsblad, the race that kicks off the European Classics season late in February. Named after a newspaper, it sends riders over cobbled roads and up steep hills in Belgium.

But the Amstel Gold Race has retained its sponsor since inception in 1966 when Jean Stablinski took the win, of what was then a 302km contest, after almost eight hours of racing in the Netherlands. Surely he celebrated with a beer as many have done in the 50 years since.

On the podium in 2016 at the end of the 51st edition, Gasparotto tried to escape the beer shower offered by his nearest challengers, Valgren and 25-year-old Italian surprise Sonny Colbrelli.

A Tinkoff rider and two wildcard teams represented in the top three and a result that warmed the hearts of most because of the tribute it offered to Demoitie. 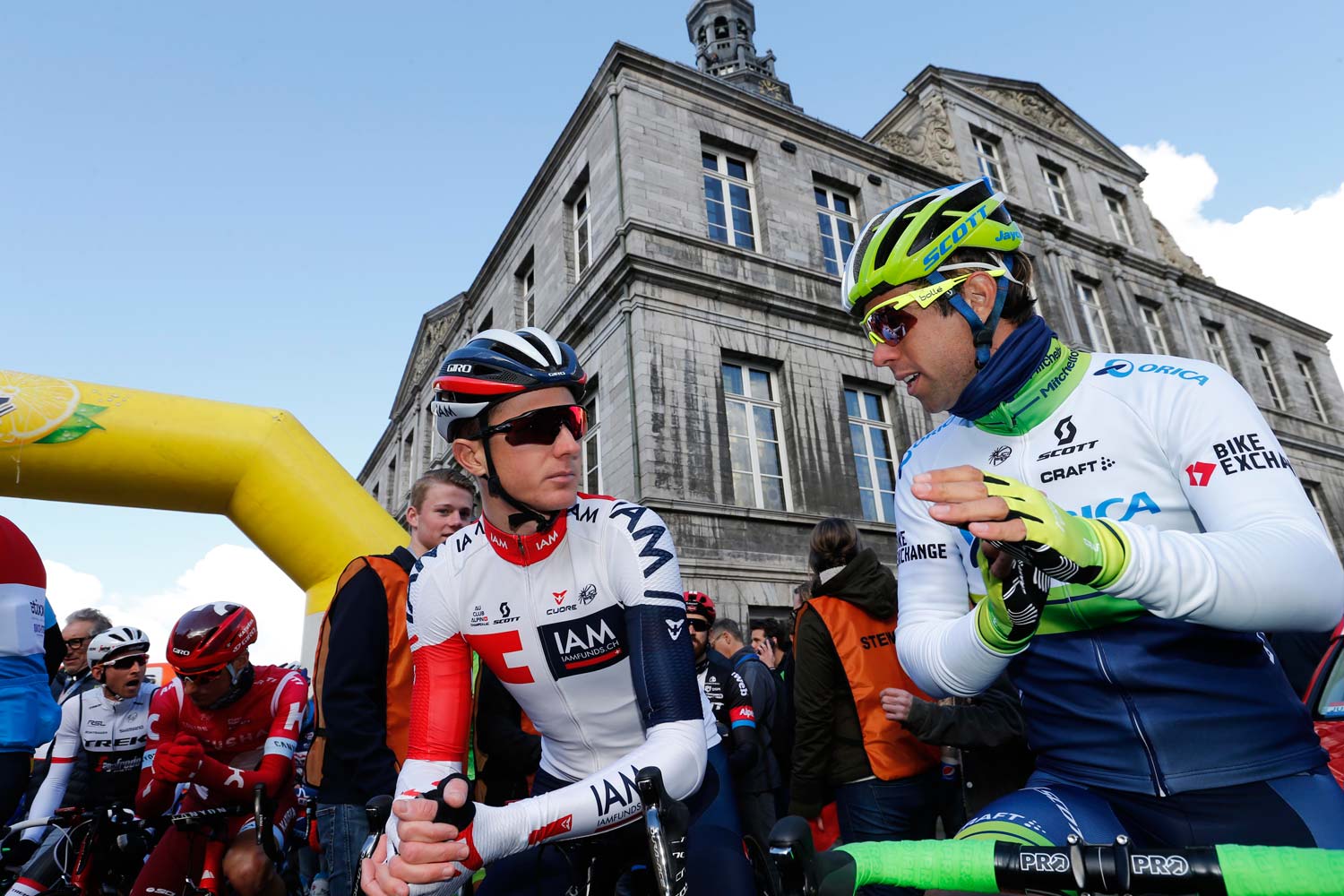 David Tanner and Michael Matthews at the start of the 51st edition of the Amstel Gold Race.
Photo: Yuzuru Sunada

The beer flowed and then questions started to be asked. In Australian cycling circles it came time to reconsider and old favourite. It’s upsetting to raise it again but here we go: why can’t Orica-GreenEdge manage the enormous talents of Michael Matthews and Simon Gerrans and achieve a winning formula?

The pair were fifth and 11th, respectively, in Valkenburg on Sunday. They haven’t raced together since the world championships of last year when they finished second and sixth.

It’s not a question of how good they are or even how well the team works to put them in a position to take control in the finale and set off to prove their immense talent. Rather it’s a question of why they can’t seem to work together.

The topic of a conflict was examined often after the worlds in Richmond but it’s not as though their lack of cooperation is new to cycling. Second and sixth in the worlds is a great result for two gentlemen of cycling – and it’s far less of a scandal than having two Spaniards finish second and third behind a Portuguese rider, as was the case when Rui Costa beat ‘Purito’ Rodriguez and Alejandro Valverde at the worlds in 2013.

And it’s easy to be an armchair critic without access to internal communication within what is a tactically savvy team like GreenEdge.

Still, when you consider what Michael Albasini did in the closing five kilometres of the 2016 edition of the Amstel Gold Race – when he effectively reeled in the attack by Tim Wellens – it does make you wonder why Matthews and Gerrans don’t work out a leadership arrangement between themselves.

Ultimately it’s up to the riders to decide who the leader is. Management is also able to dictate tactics but that’s largely during the planning phase. Come the finale, when two men from one team who are suited to the nature of a race like the Dutch Classic find themselves in a winning position, the riders should reach an accord.

All for one and one for all, it’s an old adage but it often sums up teamwork in cycling.

Alas, for all the effort put in by the likes of Albasini as well as the posse of others from GreenEdge, the images suggest conflict contributed to the loss.

When Gerrans is on the right side of the peloton, Matthews is on the left.

There’s no cohesion between the two even after guys like Luke Durbridge, Daryl Impey, Mathew Hayman and ‘Alba’ do their best to set up a winning situation. And thus we can construe this year’s Amstel Gold Race title as another one that got away… 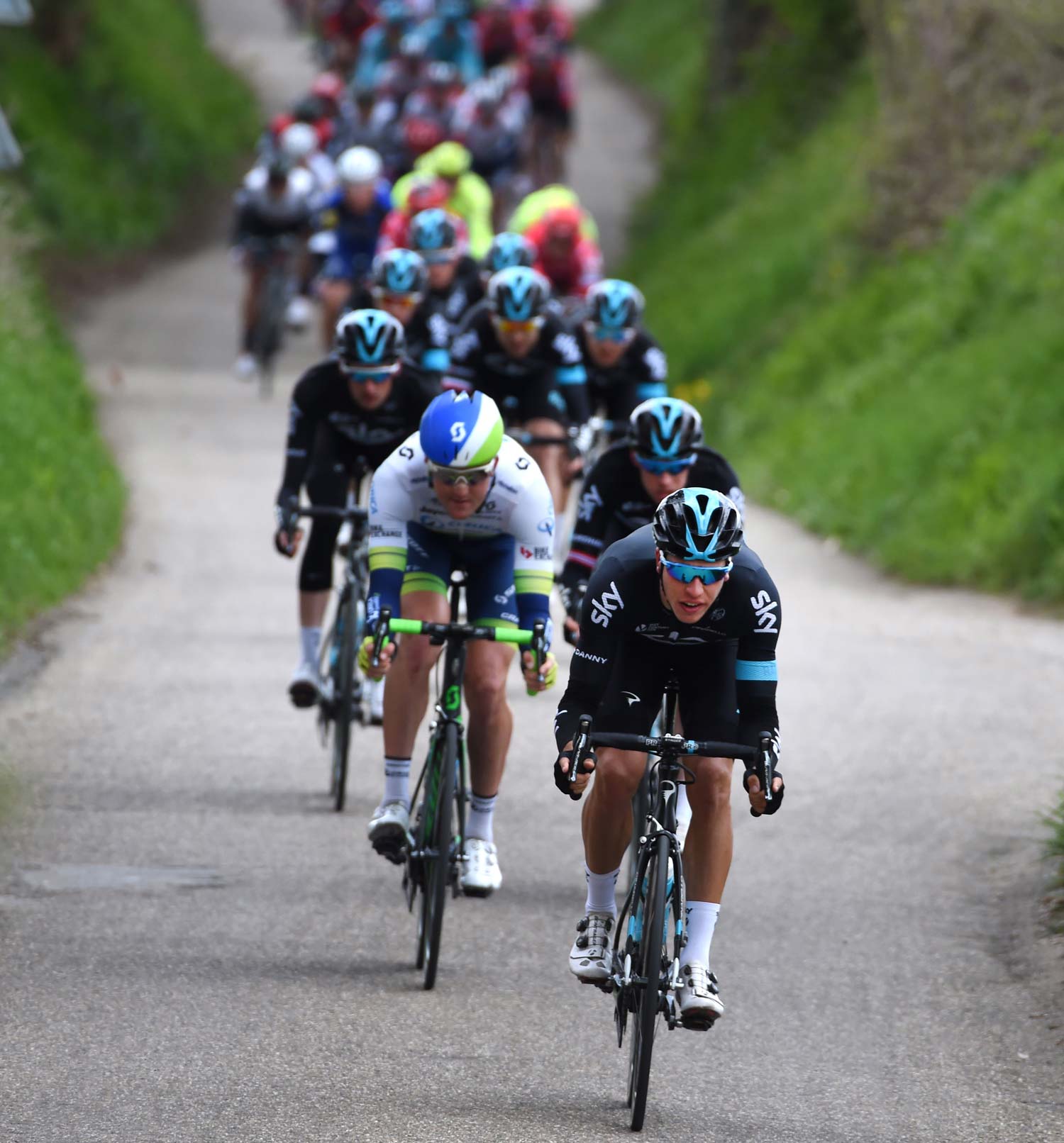 Team Sky was dominant at the front of the peloton for much of the race but there was little reward. The best of the British team? 28th place for Sergio Henao.
Photo: Graham Watson

Congratulations, of course, to Enrico Gasparotto. From 80 kilometres out it was obvious that Wanty-Groupe Gobert had big plans for the finish. They had weight in numbers, for a while, and then it was over to the leader to pick the wheels and consider his own tactics.

The winner didn’t have the option of a disagreement with another strong team-mate and yet he duly earned the beer(s) from the title sponsor. Meanwhile, other excuses have been tendered by those who came close but rode away without the reward they sought.

It did rain. It was cold. It is a confusing race. And it is long. Fatigue can ruin tactics far more easily than a lack of cooperation…

There were other teams with options: Tinkoff ended up with second and 12th: Valgren and 2013 winner Roman Kreuziger, respectively; or Movistar with eighth and 20th (Visconti and Moreno)…

But if there is criticism due to OGE for the lack of cohesion between two obvious leaders then what do we make of Team Sky in the Amstel Gold Race? Their best: Sergio Henao and Lars Petter Norhaug in 28th and 29th. It’s hardly worthy of a celebration for The Blue Line, especially considering how much work the team did as it looped around Limburg. 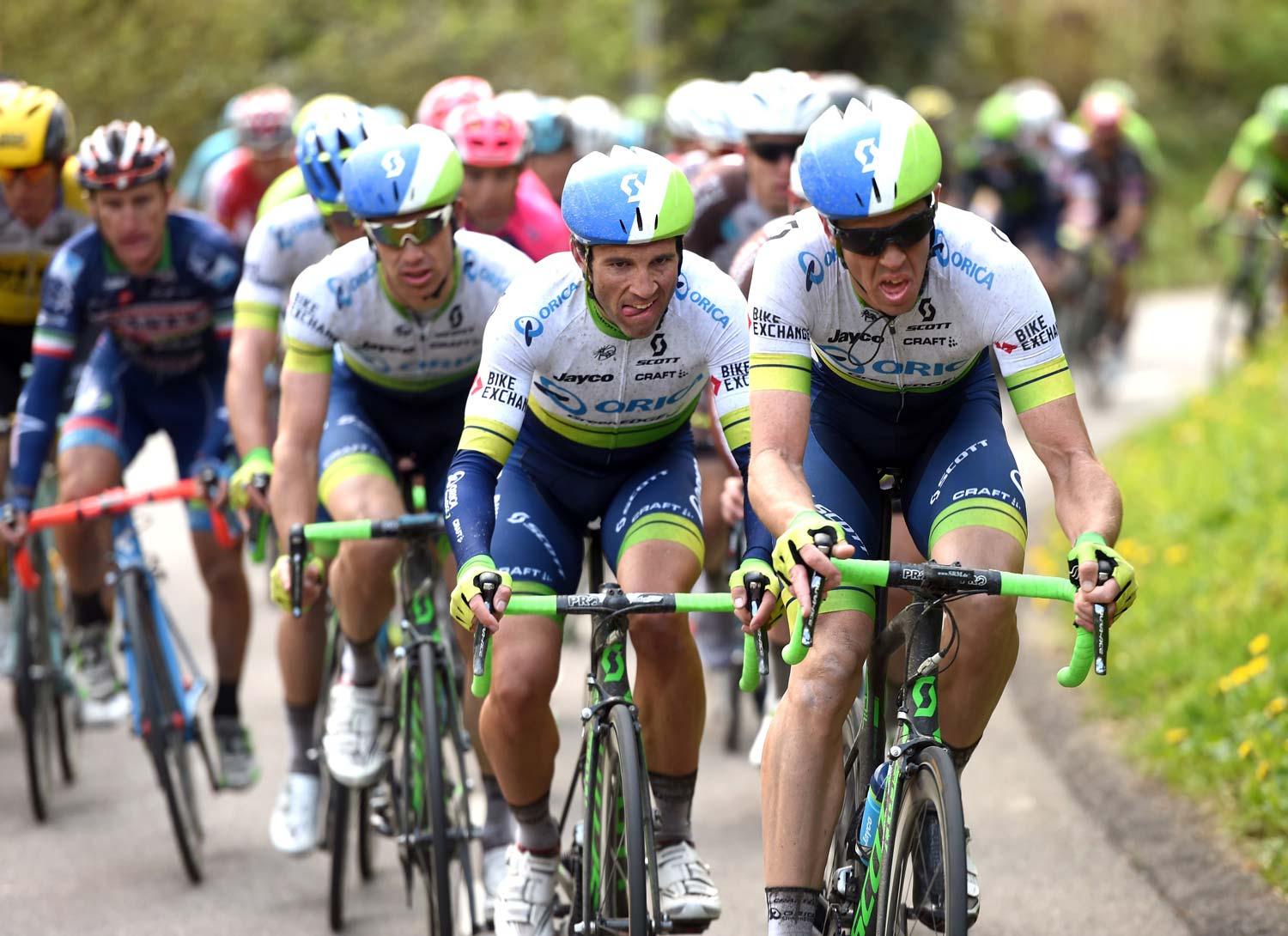 The Amstel Gold Race is one of the Classics won by an Australian cycling pioneer: Phil Anderson held off Jan Bogaert and Jan Raas in 1983. Since then Australians have become a genuine force in the spring Classics. They have won titles – multiple Monuments even and there is now an Aussie team with many stars suited to a variety of terrain.

We are fresh off celebrations of Mathew Hayman’s amazing triumph in Paris-Roubaix and, frankly, expected to be cheering another result in Holland. Fifth for Michael Matthews is good and 11th for Gerrans shows that he’s in top form for the end of April, as he’s often been.

Both Matthews and Gerrans have been on the podium of the Dutch Classic before but this year they seemed to race against each other, again. And the familiar theme deserves some examination… again.

Why can’t they talk near the finish? When they are there, primed and ready and both in need of a little bit of support, is it too much to ask that they meet in the middle of the road and decide on a plan for the finale? One for all, and all for one… and all that.

Come on guys, you say there’s no conflict between you. Can you at least make it look that way during the race?