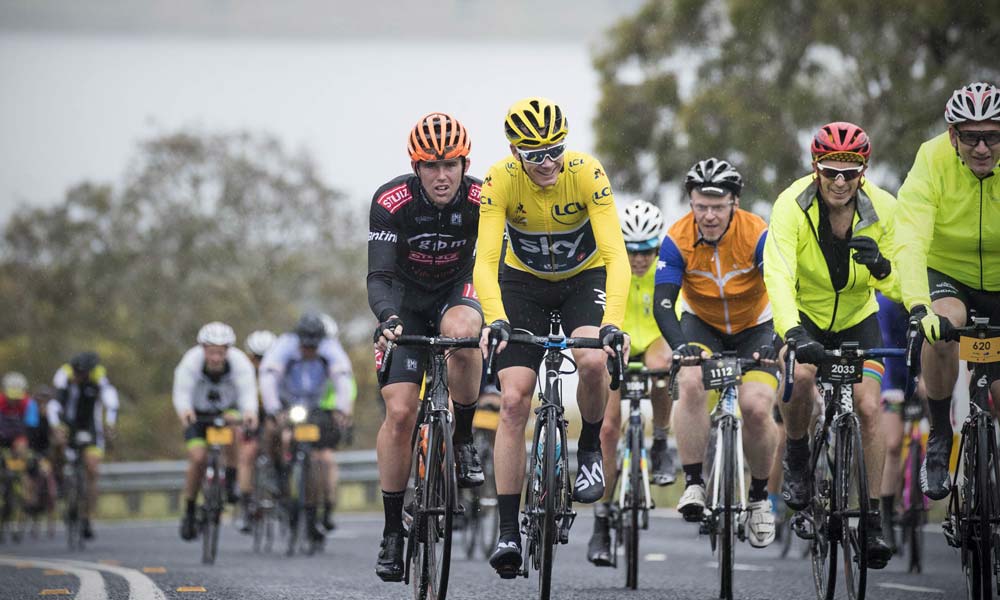 Another ride with Chris Froome

Last December a young cyclist got to ride the entire L’Etape Australia course with Chris Froome. Harrison Bailey got a second chance last Saturday for the second edition of the mass participation event in the NSW Snowy Mountains.

An encore conversation: same again… this time in the rain

As you may know, last year I had the honour of escorting Chris Froome along the roads of the NSW Snowy Mountains for L’Etape Australia. It was very gratifying that, one year on, Florian Malézieux from Lateral Events and long-time cycling promoter, Phill Bates, agreed for me to be Chris’ chaperone again. And so you’re probably thinking, ‘Oh, another blog about a day riding with Froome’.

And while I’d love to comment further about his affable personality, his humour and humility – and, of course, my experiences of riding 104km with him a couple of days ago – it has been done before, and what I wrote last year still rings true today.

So, following my second long day on the bike with Chris Froome, I’m going to explain some of the things we talked about while riding in the rain along with a few thousand other keen cyclists.

The recent announcement that Chris would be riding the 2018 Giro d’Italia and targetting the Giro/Tour double was a hot topic and it was something I couldn’t steer clear of during our discussions as we rode along. Although I can admit conversation was kept to a minimum until the sprint in Berridale… well, quite simply because I couldn’t talk.

We had a mutual agreement to swap turns at a “firm pace” until Berridale, around 75km into the ride which was meant to be 157km long (but, because of the conditions, was reduced to 104km).

A “firm pace” would be an understatement, to me at least. But Chris handled it all in his stride, never flinching, just riding, smiling and apparently enjoying his day on the bike in Australia.

Slicing through the torrential rain, we averaged in the vicinity of 310 watts for the opening 75km, with normalised power closer to 340. That’s how it was for the first hour and 20 minutes. I’m sure, like most who rode L’Etape on Saturday, it always seems a little harder producing power in the wet particularly on the rough dead road surface of the Snowy’s. It was no different for myself or Chris. 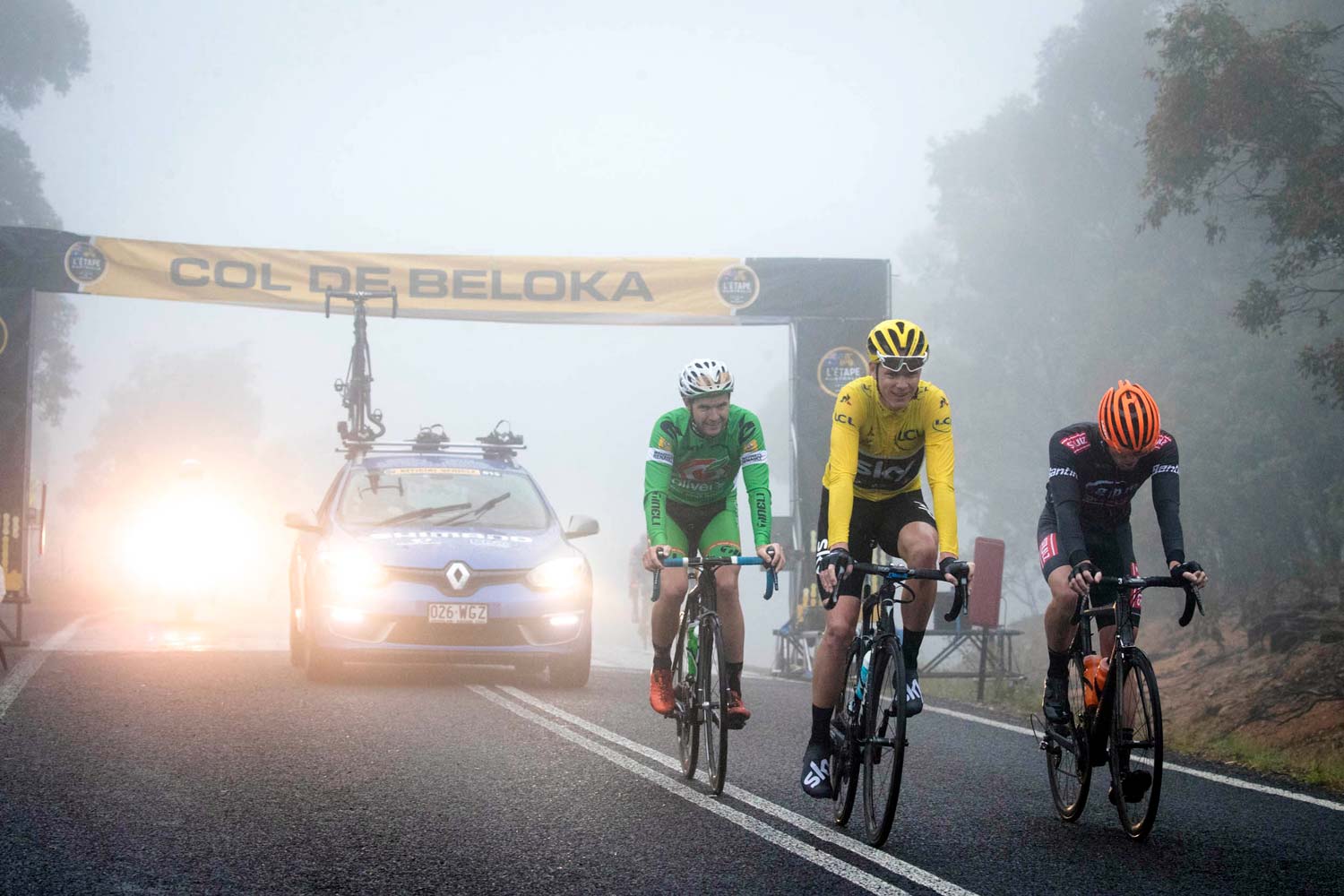 Up and over one of the climbs (above). Chris is grinning, Harrison is checking his power meter… or, perhaps, catching his breath.

At the conclusion of our sprint in Berridale, where – not so amazingly – Chris did beat me, the paced was backed off a little. Thankfully.

Conversation began to flow as we rode side by side, and notably, with the potential to create cycling history is looming the Tour/Giro double came up.

Chris can immortalise himself with the likes of Anquetil, Merckx, Hinault, Roche, Inudurain and Pantani – the select group who have won both the Italian and French Grand Tours in the same season. Added to his Tour/Vuelta double in 2017, it’s possible that Chris could hold all three Grand Tour titles at the same time – a ‘Grand Tour Grand Slam’ if you like.

Can he do it? Only time will tell but, I think, if anyone in this era of cycling is capable of such a conquest it’s Chris Froome.

Team Sky had the aspirations for Froome to attempt the Giro/Tour double this year, and ultimately the decision was in Chris’s hands. He is acutely aware of the challenges presented, knowing full well that some of his contemporaries – like Contador, Quintana and Nibali – who have attempted the double have failed. Hence he didn’t take the decision lightly. 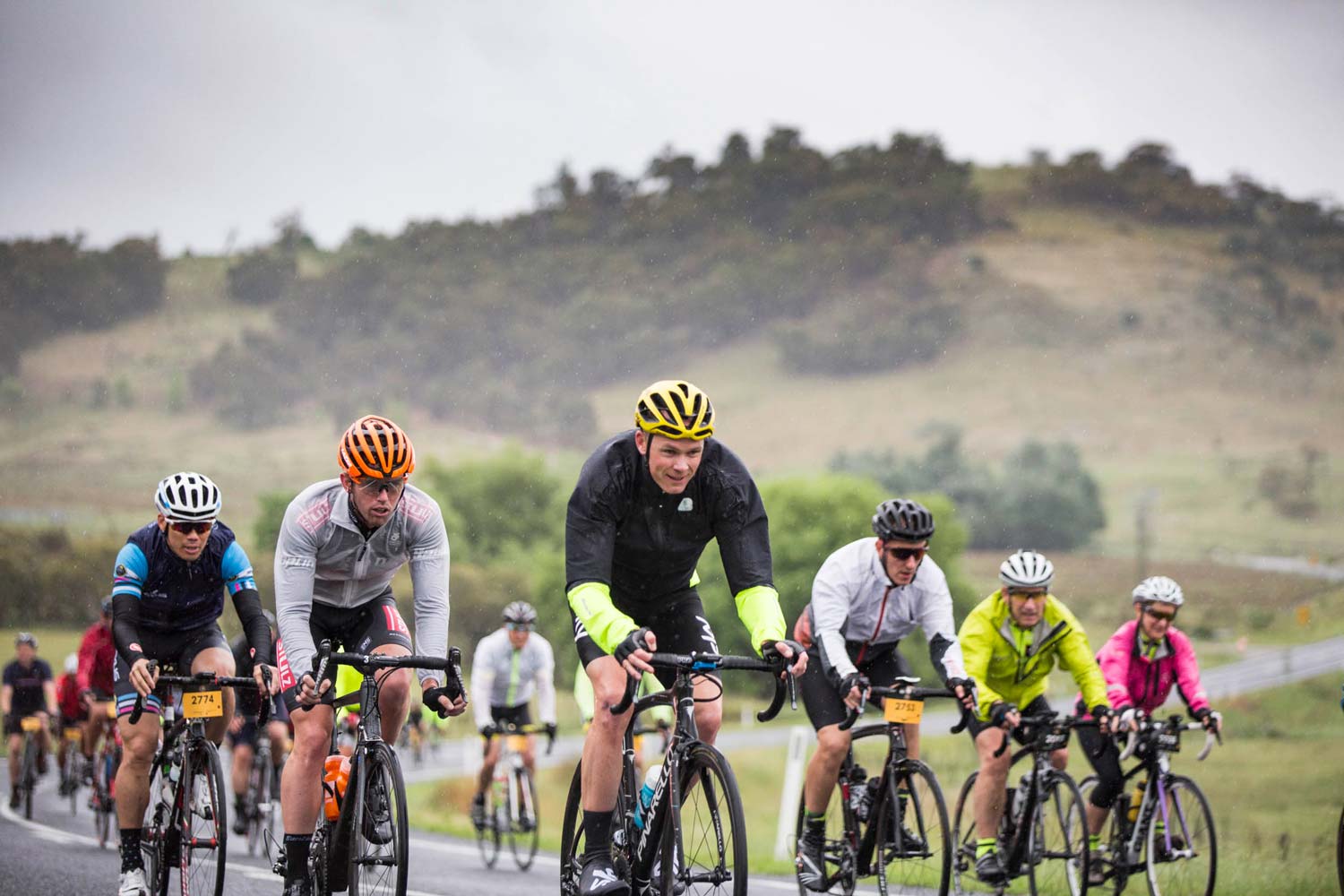 Covering up the yellow jersey (above). Apparently Chris Froome didn’t think it necessary to bring wet weather gear to Australia. On the morning of the second edition of L’Etape he asked someone to buy a rain jacket for him.

He told me that what sealed his decision in going for the double was the additional week between the conclusion of the Giro and the commencement of the Tour. So, in a way, cycling can thank football for the opportunity that the 2018 World Cup in Russia has created.

There have been other examples of the Tour being delayed a little because of a World Cup; in 1998, for example, the race didn’t begin until 11 July and finishing in August for only the seventh time in the history of the event (the other instances being: 1907, 1908, 1909, 1936, 1950 and 1954)… And the reasoning behind the delay in 1998, the latest season in which a rider has won both the Giro and the Tour, was that the World Cup, contested in France that year, would dominate the sporting media. A delay was facilitated and it served Marco Pantani well.

One theory from Team Sky, Chris told me, is that he can race the Giro at a level where he is physiologically capable of winning and then starting the Tour even stronger.

The thinking is that racing the Giro will raise Chris’s fitness to a high level, followed by a week of doing very little will allow his body to recuperate. Then he’ll be able to start the final training block going in to the Tour “fresh”, at a higher level of fitness than he was prior to the Giro.

In theory it makes sense, whether the it becomes reality remains to be seen.

With the approach and execution that Chris and Team Sky bring to every race, he presents as the best candidate to accomplish the double. Personally if he isn’t able do it, I don’t think anyone is capable in this day and age.

I might be jumping to conclusions a little but if he does win the Giro and the Tour he has every reason to go for the Vuelta. 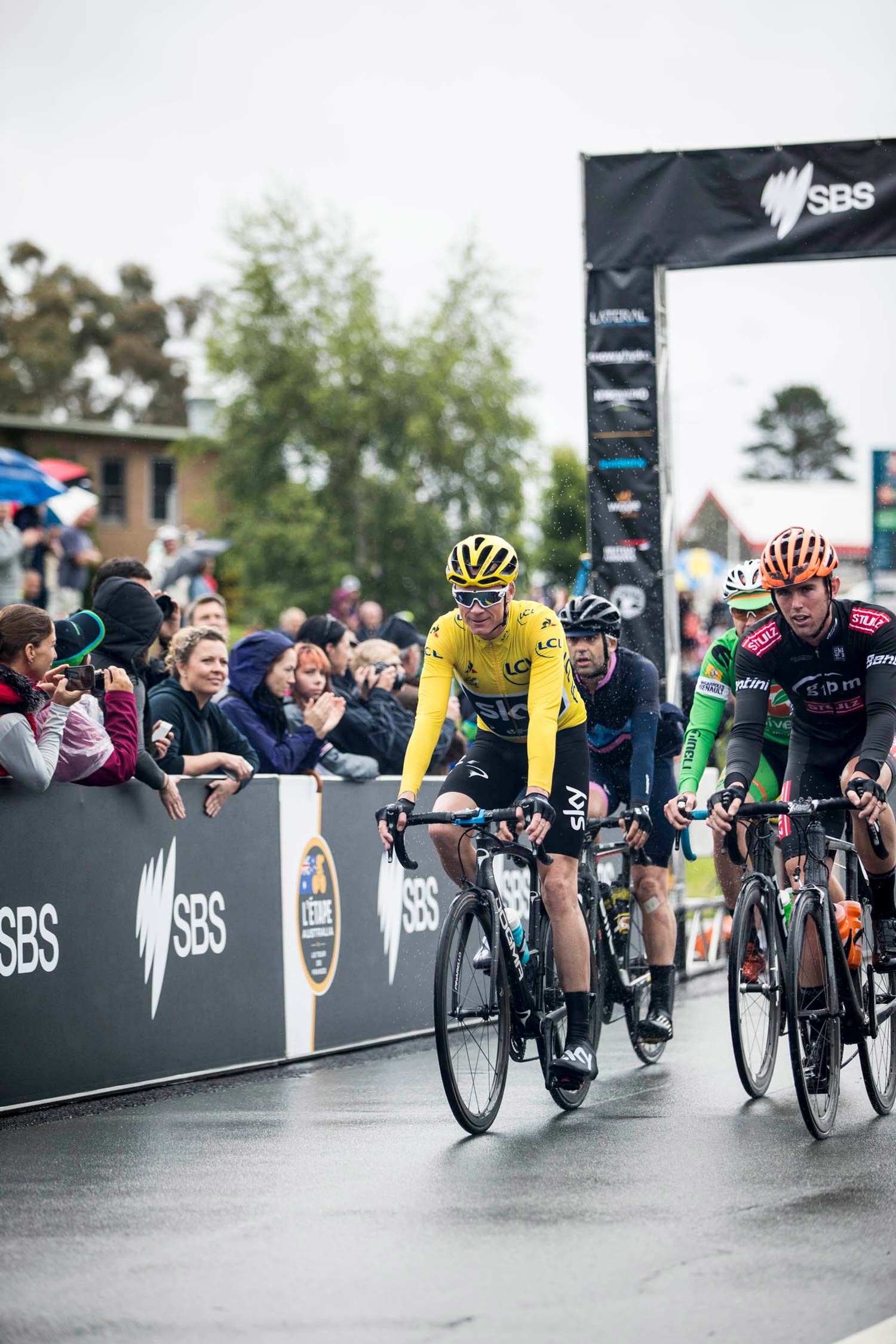 Still smiling at the end of a wet ride: 104km rather than the intended full course… because of the conditions.

While we spoke about many different things during our ride on Saturday, he said nothing about possibly going back to the Vuelta but I couldn’t help but entertain the idea as we rode along. Just finishing three Grand Tours in a year is quite a task (unless, of course, you’re Adam Hansen – and, in his case, it’s something of a habit)… but winning all three? The mind boggles at the concept.

One thing that may be of hindrance to Froome has been his incredibly busy schedule this past year; in 2017 he was on the road for approximately 200 days. It’s not something that can be quantified, but the toll of being away from family, sleeping in unfamiliar beds and constantly jumping from time zone to time zone are all factors that can inhibit performance. Despite this, he’s previously been able to overcome these factors, and there is no reason he can’t do so again. In recent years, after having started a family, he told me that while he’s away from home he needs to utilise that time as best as he can and thus he works even harder every day he’s away.

When we watch these champions race past, be it from the road side or on TV, the human element is almost entirely removed and we tend to look at these athletes as if they’re superhuman or even robotic. But add in the human element into someone like Chris and it makes the achievements of his career all the more impressive.

L’Etape Australia showed the human side of Chris, and anyone who had the chance to meet him, get an autograph or snap a selfie can surely attest to this.