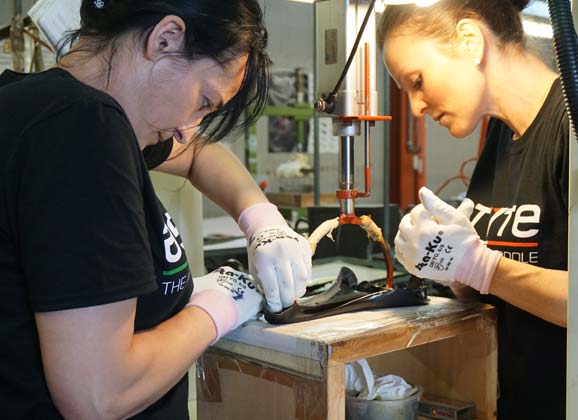 Astute: the beauty is in the production

There are many saddle brands out there but none of them are quite like those made by Astute. On a recent trip to Italy, Jack Lynch visited Astute’s headquarters and discovered that a lot goes into the premium product. It’s a new name in cycling but the brand is destined to have an impact. The Australian distribution network is being established and you can expect to see Astute saddles on the shelves of shops (and on bikes) in the coming weeks… 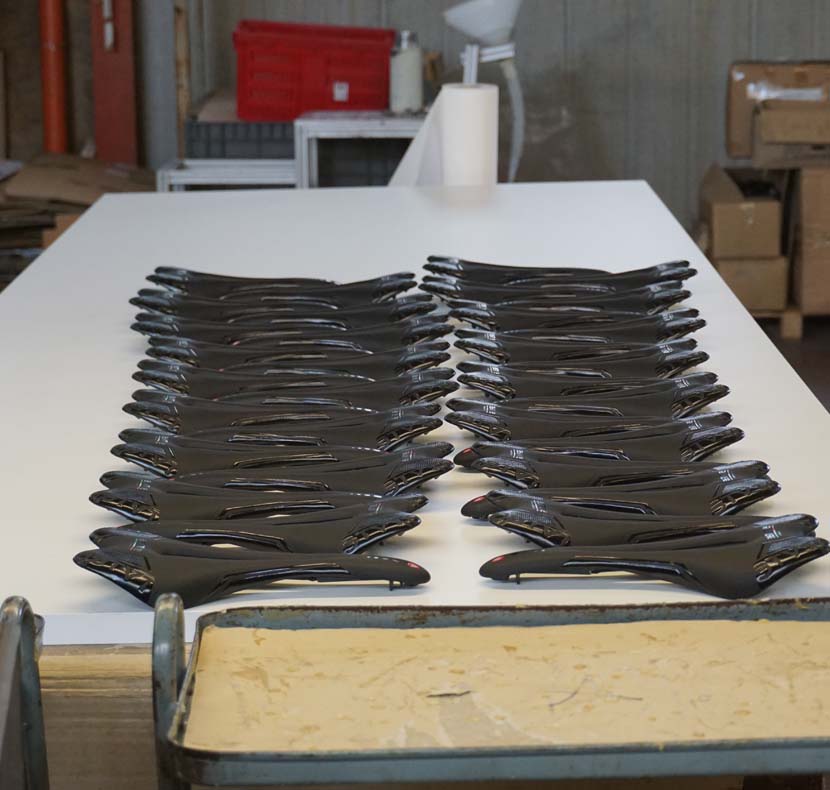 18 factories, eight days, one saddle. Astute is not the standard ‘designed in Italy, made in Asia’ company. Its soul is in Italy, or more accurately Veneto where each of the 18 factories are situated. Together, these independent fabricators and craftspeople create beautiful saddles which tell the story of the region and its rich manufacturing history.

The company was formed three years ago by Gildo and Andrea Rizzato – a father/son combination who operate GR Bike (founded by Gildo in 1988) which is a distribution company specialising in exporting top quality Italian products throughout Asia, South America, the USA and other regions. The pair say that their first love is soccer but it is hard to imagine them having any passion left for the round-ball game after hearing them pontificate their ‘baby’, the Astute brand.

Andrea is the main operator of the saddle company and runs it with a small and committed team. Gildo oversees things but splits his time as president of Astute, GR Bike, and of the local soccer team, Abano Calcio. 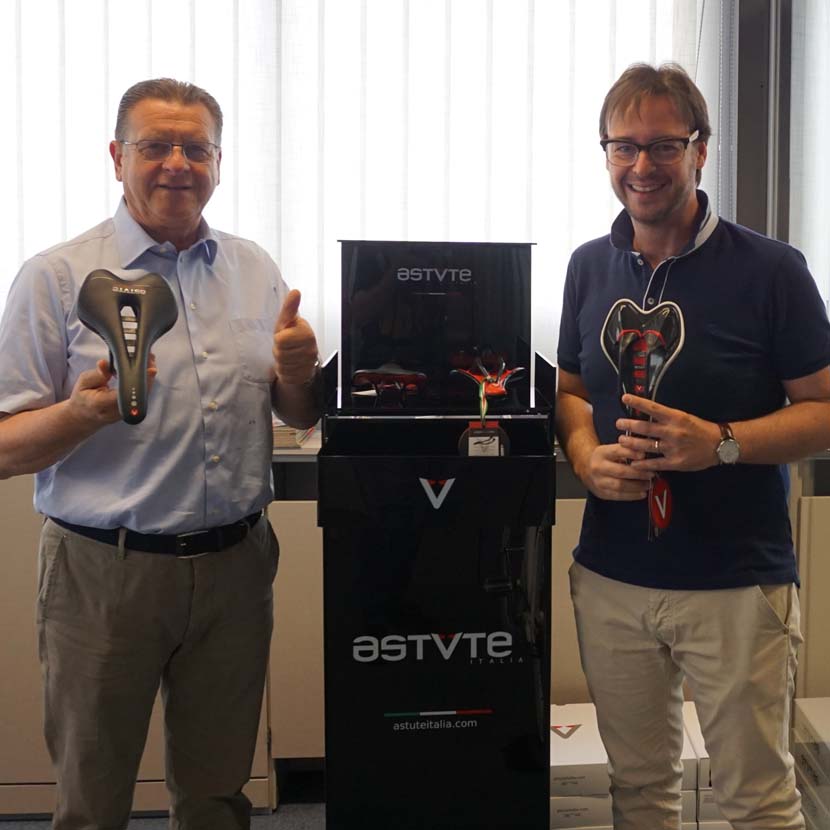 Astute is not a product which appeared overnight. Andrea Rizzato spent a year agonising over which companies would help make his dream a reality. As he puts it, “there are two main points when considering Astute: technology and design.” The search for perfection has seen the brand working amongst the world’s leading automotive and fashion brands. It can be said that Rizzato’s two main goals have been achieved.

Getting information on the entire saddle building process is not easy, however. Rizzato will happily share some of the methods his company uses and even give a factory tour, but there are plenty of secrets which are not allowed to be printed. When asking in depth, he smiles and says something like, “I cannot give Astute’s identity away that easily.”

The details of Astute’s growing range are that the saddles use either a carbon or nylon shell with either carbon or titanium rails. All models see two shells glued together to increase stiffness and reduce vibration. There is a cut-out design and a ‘closed’ shell, both of which use the patented ‘U’ channel which runs down the centre of the saddle and allows three layers of memory foam to be inserted, without any excess bulk. The design’s theory is sound and with the lightest saddle coming in at quoted 140 grams which is competitive but not mind blowingly light. Weight was never a principle aim of this project though. 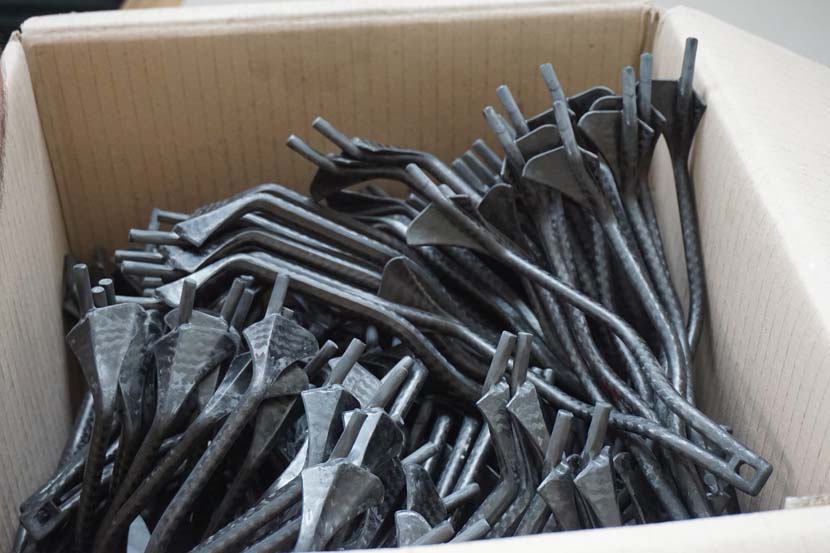 Every part of an Astute saddle is made in Veneto, Italy by hand. Rizzato proudly explains that only 25-years ago, 52 per cent of the world’s saddle production was from this small area in Italy. Those numbers have rapidly declined as offshore labour has been preferential for other ‘local’ saddle makers like Fizik, San Marco, and Selle Italia. The plants may have been decimated but the passion and knowledge in the region still remains.

And here lies Astute’s secret weapon. ‘The Guru’ (who is not allowed to be named) was retrenched from his job of 40 years at, “one of the big saddle makers.” His work is said to be stuff of legend and he is said to have ‘hands of gold’ – a once in a generation talent. The Guru’s daughter manages Astute’s warehouse and ensures the quality of the product is never compromised, whatever the cost. This really is a family friendly operation.

Managing the saddles’ quality is no easy task. With all the different processes, the Guru’s daughter (who also can’t be named) needs to see each saddle about four separate times before ticking it off and sending it to the next part of its development. Amazingly, only about two percent of the products are knocked back due a poor finish. The most common defect is the saddle’s microfibre cover getting glued imperfectly.

Such a blemish is understandable, covering by hand is an arduous task and each saddle needs to be attended to by two women, both armed with a pair of needle-nosed pliers, a Stanley knife, and some incredibly resilient hands and forearms. The effort required to cleanly fit the cover over the shell looks exhausting but, with only two pairs working at a time, the staff at Astute gets plenty of practise. Women are always required to complete this exercise because, in Rizzato’s words, “the ladies are more attentive and dedicated,” for this kind of job. This seems to be the case for most delicate jobs in manufacturing. 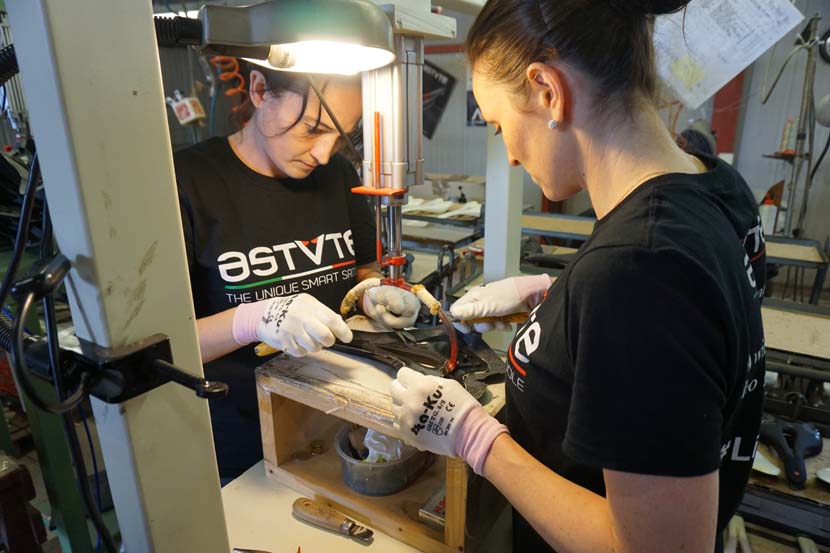 Seeing thousands of saddles being covered with three layers of foam and a final microfibre exterior is one thing, but it is at another facility where the jaw drops. The saddle’s carbon shell is made at a secret location in Veneto which also produces carbon parts for Italy’s top cars (no points for guessing which) as well as soles for Gaerne, Sidi, and Pearl Izumi shoes. It truly represents the finest brands out there and fits Astute’s mantra of modern-classic design meets current technology. It is the perfect place for Astute to deliver on its promise to find no compromise in the pursuit of excellence whilst highlighting its origins’ best fabrication methods.

The carbon factory may represent the technological side of the business, but the glue workshop is where high fashion arrives at Astute. The saddle’s two carbon shells are glued at a facility which specialises in rubber adhesion. But this is no cheap seal and deal company, brands under its roof are some of the most desired Italian high-end labels in the world (which are to be left secret). Obviously rubber sticks differently than carbon and it took five months of testing resins at a laboratory in Milan to achieve the desired blend. Rizzato says that the glue house is, “responsible for the best soles of the best shoes in the world,” so why not adopt similar principles and workmanship to his Astute saddles? 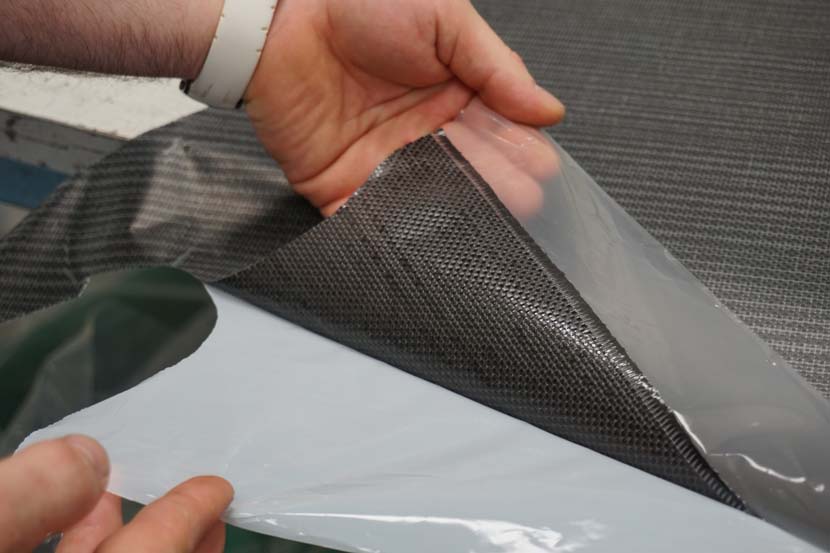 This mentality presents as another strong point for Astute. There is no aftermarket philosophy as OEM models are perceived to devalue the brand – if you make the best, people will buy the best. “Beauty is our priority… and comfort,” says Rizzato. The beauty arrives from each separate, hand produced manufacturing experience and the comfort comes from ‘The Guru’ and his years of experience shaping saddles.

Astute is a saddle which Australia will become more familiar with shortly. It sponsors Team Colombia and will soon unveil more shapes including a women’s range and chrono saddle. “We need to show the beauty of Italy. It’s not easy to project, but we’re trying,” says a humble Rizzato who shrugs his shoulders and admits, “the market will decide.” He has achieved his vision, now it’s up to cyclists across the world to share it.

Discounting a year Astute spent developing and refining the product, it has been on the world’s cycling market for two years, blending carbon and fashion trade experts to create something special. Customising the underside of the shell is unique feature and gives gear junkies another aspect to accessorise. (Interestingly, Astute’s most common shell colour has been fluoro yellow.) Aspects like this make Astute standout.

These premium saddles are expensive and beg to question, “what else can I spend that money on?” But with the memory foam, industry leading finish, and the knowledge that it has been produced by leaders in the automotive industry and high-fashion apparel, it makes the saddle worth it. It is artisan beauty in form and function that will make your bike stand out and enable a comfortable ride. Grazie Astute, viva l’Italia!

– Photos and words by Jack Lynch 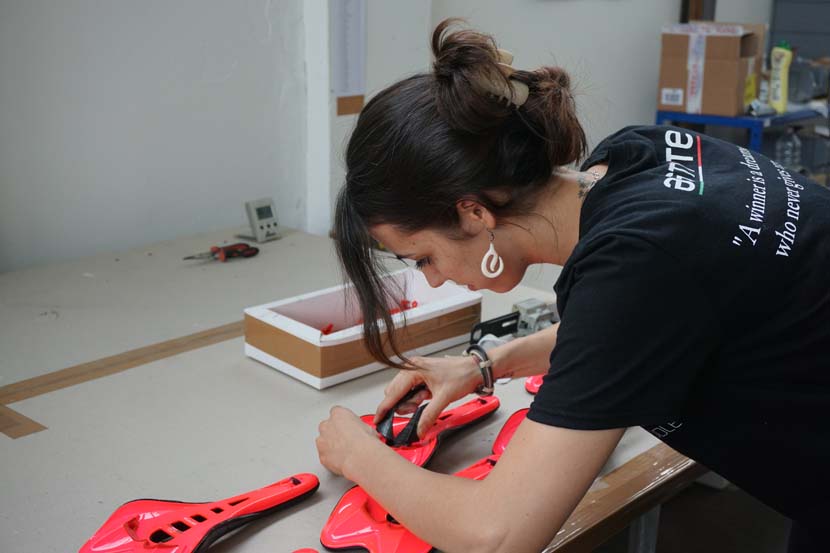