AusCycling, incapable of following its own recommendations

The first (and only) media release issued by AusCycling during the Commonwealth Games highlights an equipment concern on the day the ‘kilo’ was contested. It is the latest in a saga that would be comical if it wasn’t quite so stupid…

Australian riders demonstrated how adaptable they are, with Matt Glaetzer and Tom Cornish winning gold and silver in the ‘kilo’ in an event in Birmingham*. They achieved this using drop handlebars because the Australian Cycling Team decided that it wasn’t worth the risk of using custom-created aerobars for fear of failure.

There’s an overwhelming sense of irony in the media release issued by AusCycling at 11.00pm (AEST) on Monday 1 August.

One day shy of the anniversary of Alex Porter’s dramatic crash in qualifying at the Tokyo Olympics, an accident that a 171-page report later determined could have indeed been avoided, AusCycling has essentially issued a media release stating that it cannot listen to its own advice.

The lessons of Porter’s crash prompted a reconsideration of what equipment the Australian sprinters would use for the ‘kilo’ time trial at the 2022 Commonwealth Games.

“Following extensive testing and an exhaustive investigation of alternatives,” reads the opening sentence of the release, “it has been determined that the pursuit bars due to be used in today’s men’s 1,000m time trial at the Birmingham 2022 Commonwealth Games cannot be used safely.

“As a result, our riders will use drop bars which can tolerate the loads generated during the competition, but will likely result in marginally slower times.”

Slower in theory, but Glaetzer and Cornish debunked that notion. (See more on this, from a reader.)

In other words, the decision was made at the 11th hour to replace what a former world champion has traditionally used in this competition with another less suitable product.

It would be possible to go long on this report, very long in fact. There are 171 pages of material that outline the embarrassing issue that spoiled the Australian team pursuit campaign in Tokyo. But let’s try and keep this overview relatively quick, because much of what was written in the report commissioned by AusCycling after Porter’s accident has essentially been ignored. 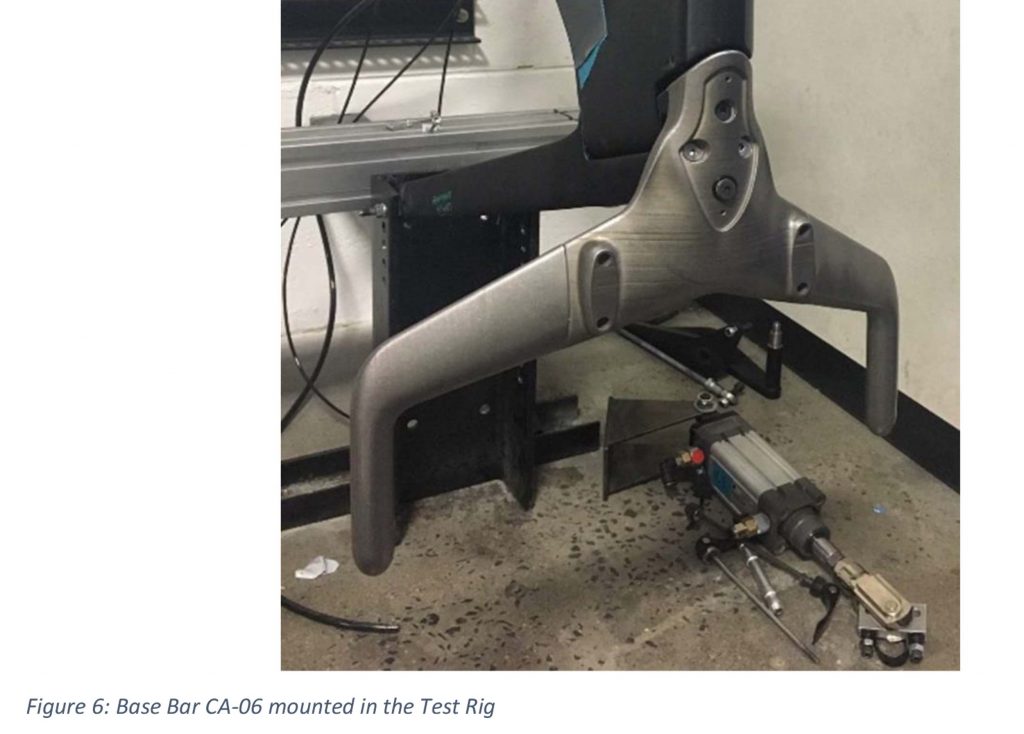 The “Executive Summary” of the report compiled by John Baker begins as follows:

“On 2nd August 2021 at the 2020 Tokyo Olympic Games, the pursuit handlebars of the fourth athlete rider in the Australian Teams Pursuit qualifying heat failed, spilling Alex Porter onto the track. AusCycling commissioned an investigation into the reasons for the failure. This Report is based on fact and gathered evidence and is the opinion of the Investigator.”

Note the date of the original incident that prompted a long and exhaustive review into why equipment failure severely hindered the Australian Cycling Team’s campaign at the Tokyo Olympics: 2 August 2021.

A year later, AusCycling issues another press release relating to equipment concerns at a major international competition (see below). 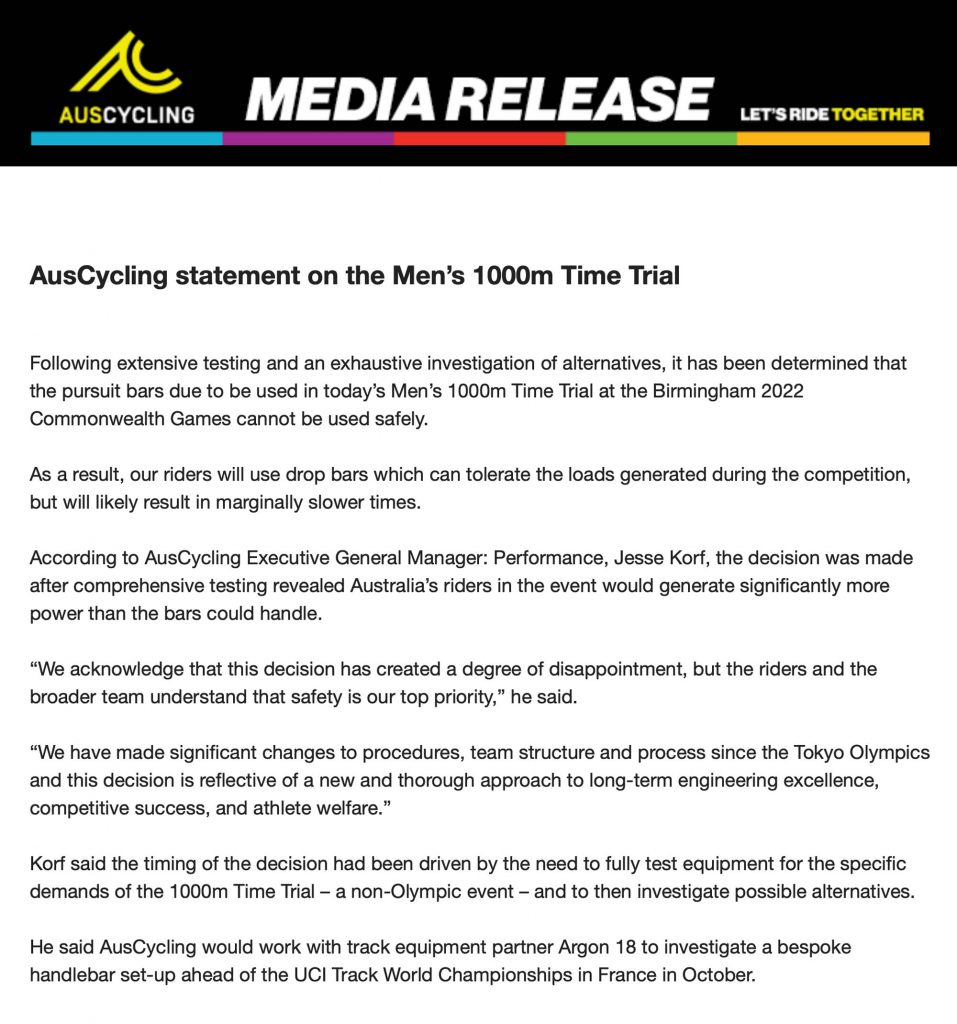 This February, over six months after Porter crashed in qualifying at the Olympic Games because of equipment failure, Baker’s report was made public. Before anyone had a chance to read through the document, AusCycling called a media conference to offer some explanations of how and why things went awry.

I joined the Zoom conference and even asked a few questions, but I didn’t publish anything about it as I felt that it was largely a pointless exercise. Why spend considerable money on a review that essentially confirms suspicions that money was already wasted on trying to re-create a product that had already been provided by the national team’s bike supplier?

A few other media outlets latched onto the story, some even bothered trying to summarise the 171-page document, but it essentially served no purpose.

The report was a redundant exercise, and we can say that now because if the recommendations had indeed been considered, why would AusCycling feel the need to justify why Glaetzer and Cornish raced with handlebars that weren’t ideal for the ‘kilo’ of the Commonwealth Games of 2022?

There were lessons to be learned from Tokyo but they seem to have been ignored for a year, despite the efforts of Baker et al who tried to outline the errors that took place. 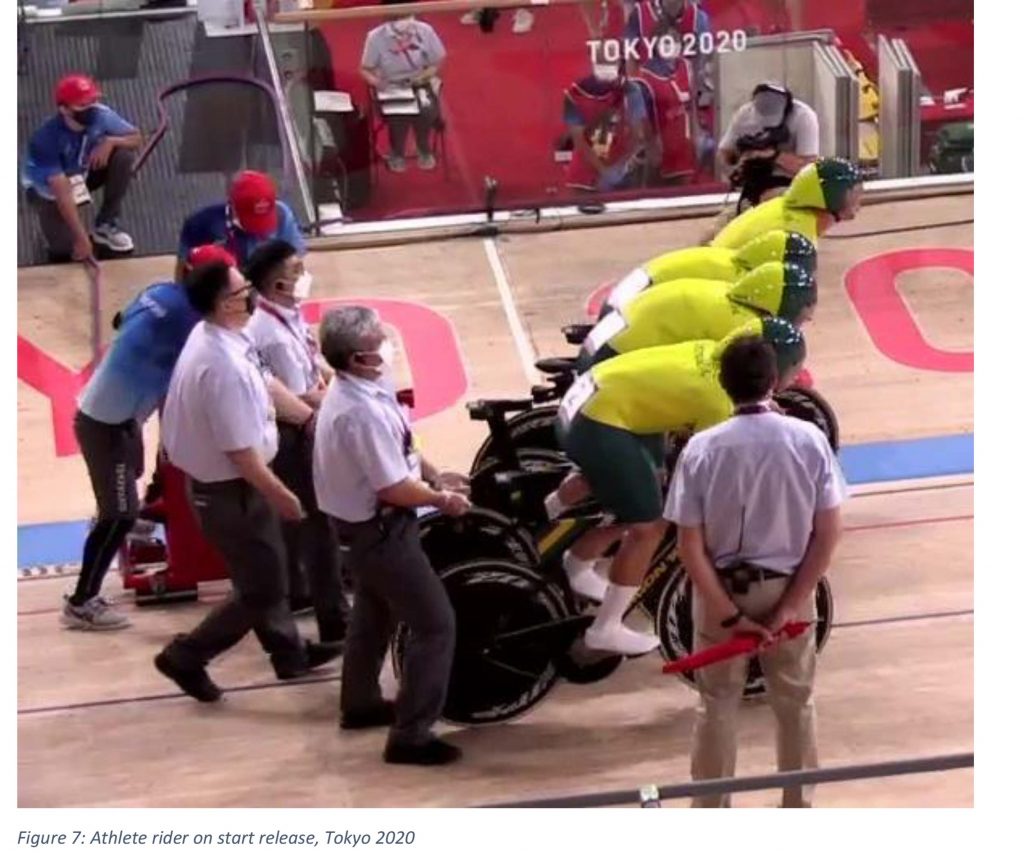 A glimpse into the Australian Cycling Team culture

We can now look back on the report about the handlebar failure in Tokyo and Porter’s subsequent crash and realise that, even when something is spelled out in intricate detail, AusCycling still cannot grasp the need to review the system that allowed mistakes to happen.

The comments below are just a few passages from the Baker report.

“This graduate was also a keen cyclist and had mechanical hand skills from his exposure to cycling so he was employed as a bicycle mechanic when needed and as an engineer at other times. At interview he was aware of the extended Base Bar requirement but was offered no opportunity to participate at the time.”

Baker went on to explain plenty of other examples of mismanagement.

“Also at interview,” he wrote, “this graduate engineer highlighted the ‘closed shop’ environment to implement improved procedures as a major frustration.

“As an example, the Argon 18 Bicycle instructions called for Base Bar to steering fork bolt tightening torque to be 12Nm13; an Australian Cycling Team bicycle mechanic opined that this torque was excessive and was reportedly reducing it to 6Nm. A compromise was reached with the Bicycle Build Book requiring 8Nm. The matter of bolt tightening torque and its role in transferring athlete rider force from the Base Bar to the frame are addressed in the Isometric Exercise and Base Bar to Fork Bolt Torques Section of this Report.”

There’s plenty of other such stuff… but I’ll fast-forward to the media call in February 2022 and my questions and the answers offered by the CEO of AusCycling, Marne Fechner.

It’s relevant again now, so here are the verbatim transcripts of the exchange via Zoom.

RIDE Media: I wonder if you could offer a little summary of the costs associated with the production of the handlebar… I know budget is a consideration that you have to factor in with your role [so] can you talk to me about how much it has cost to do this investigation and how much money has been wasted on the whole rigmarole?

Marne Fechner: “I fundamentally don’t believe that this has been a waste. And it’s part of an ongoing review of our high-performance program and high-performance ecosystem. So, I don’t think it serves any purpose to go into the detail of what we’ve invested here because, ultimately, we want to be better.

“Our athletes, our staff, the Australian public deserve us to be better and that’s what we’re focussed on.

“I think it has been an extraordinarily worthwhile process that we’ve gone through.

“As I’ve said earlier, it has put us into some uncomfortable positions facing into the findings of the report. That said, it is a great opportunity to know exactly where we are and that’s the rationale behind the broader high-performance review, particularly as we – as an organisation – start to look beyond just one Olympic cycle, our strategy will take a much longer view of that.

“We anticipate that a refresh of our high-performance program will take many cycles and hopefully we’re continuing to raise the bar, not stay the same.

“Any money we spend in this space is really important to the future of the sport and the way we perform.”

RIDE Media: Has it impacted your relationship with Argon18? Do you see that being an ongoing sponsorship moving forward?

Marne Fechner: “We’ve worked really closely with Argon18 and with Bastion through this process, our partners. It’s absolutely critical.

“I think we can all remember the feeling of sitting in front of the TV and watching the incident happen and we are in constant communication with Bastion and with Argon18 and have stayed connected around what we do now, and what we do next.

“So, these things are testing on partnerships, and I’m really pleased with the way that we’ve worked collectively. I think it says a lot about the way we intend to do our business, to manage our partnerships, to get the best outcomes we possibly can moving forward.”

RIDE Media: Since the incident in Tokyo, a lot of people have spoken up – people associated with the team – and there’s talk about the crash that happened during training in Rio when the women’s team pursuit squad had an accident. There has been a suggestion that it was a handlebar failure that contributed to that fall as well. Can we just get a bit of clarity on that because otherwise we’re operating on rumours. Has that been part of the investigation and were no lessons learned if it was the case. I’m just curious to know; I know it’s a completely different cycle [and] completely different people were involved but is it sort of a case of history repeating itself?

Marne Fechner: “I don’t think so, Rob. It’s a good question and, like you, I’ve heard that as well. When these things tend to happen, people remember. But in terms of the scope of this report, it was specifically about the Tokyo incident.

“I know that people provided information for John… the Rio incident was outside the scope of this investigation so we can’t find any correlation in relation to that.

“Because this report is extremely thorough, it has a clear set of recommendations, if there is an incident of this nature that happens again we’ve obviously got a much better historical lens on what happened and why. I hope that answers your question.”

Of course, AusCycling’s CEO would “want to do better”, but despite the “clear set of recommendations” it didn’t help much at all as “an incident of this nature” did happen again.

Thankfully no riders were injured and the Australian team still dominated the event but this latest debacle highlights that not even expensive reports with clearly defined recommendations can be adhered to by a management that continues to demonstrate how poorly they are managing Australian cycling.

*Note: I made a commitment to not report on the Commonwealth Games as part of a personal boycott that relates to AusCycling’s poor media management. This article includes references to that event but for stories of the racing and results, you’ll have to look elsewhere.