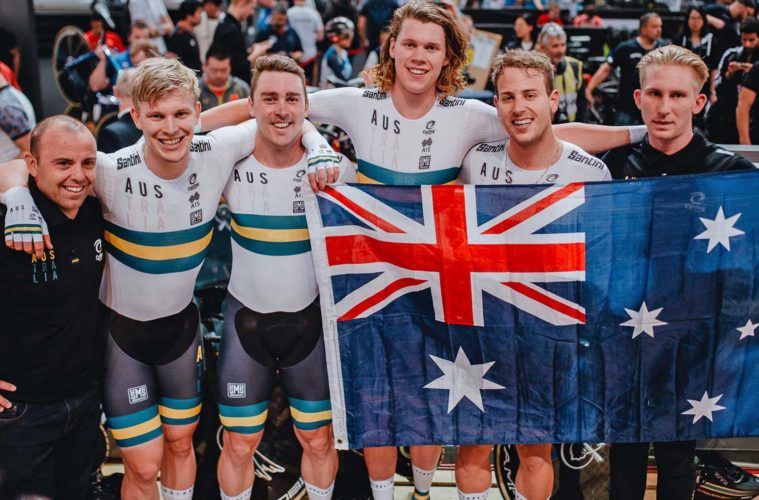 On the Pruszkow velodrome late in the evening of 28 February 2019, four Australians – Leigh Howard, Kelland O’Brien, Alex Porter and Sam Welsford – set off to race a 4,000m team pursuit final. On the other side of the track was Team GB. At major championships in modern cycling, this is arguably, the most traditional showdown: Australia vs Great Britain.

At the Olympics, the Brits have had the answers: Beijing, London, Rio – they’ve won them all, with a world record each time.

At the world championships, the Australians are consistent – and, in 2019, they were incredibly fast.

Only one team has ever raced the pursuit in under 3:50: Australia – and now they’ve done it twice. The first time was at the Commonwealth Games in 2018; 3:49.804, gold medal, world record… annihilation of the English team who could only conjure 3:55.310. Back then that was the focus of the team pursuit squad from the Australian Cycling Team for the season; they ignored the worlds, didn’t defend their 2017 title, and concentrated on achieving glory at ‘home’.

Youth was matched with experience. Welsford, a freight-train who only seems to get stronger and faster. O’Brien, a lanky powerhouse who has the speed and looks to become a genuine superstar of Australian sport. Porter, an articulate young South Australian who swapped his original sporting love, AFL, for cycling after being identified by SASI as a teenage prodigy. And Howard, a young star who has been there and done that in the cycling world for over a decade.

They were good on the Gold Coast and even better in Pruszkow.

The rivalry continues, and it will be talked about in cycling circles for a long time yet. And the discussion will now centre on what’s to come in Tokyo in the first week of August 2020. 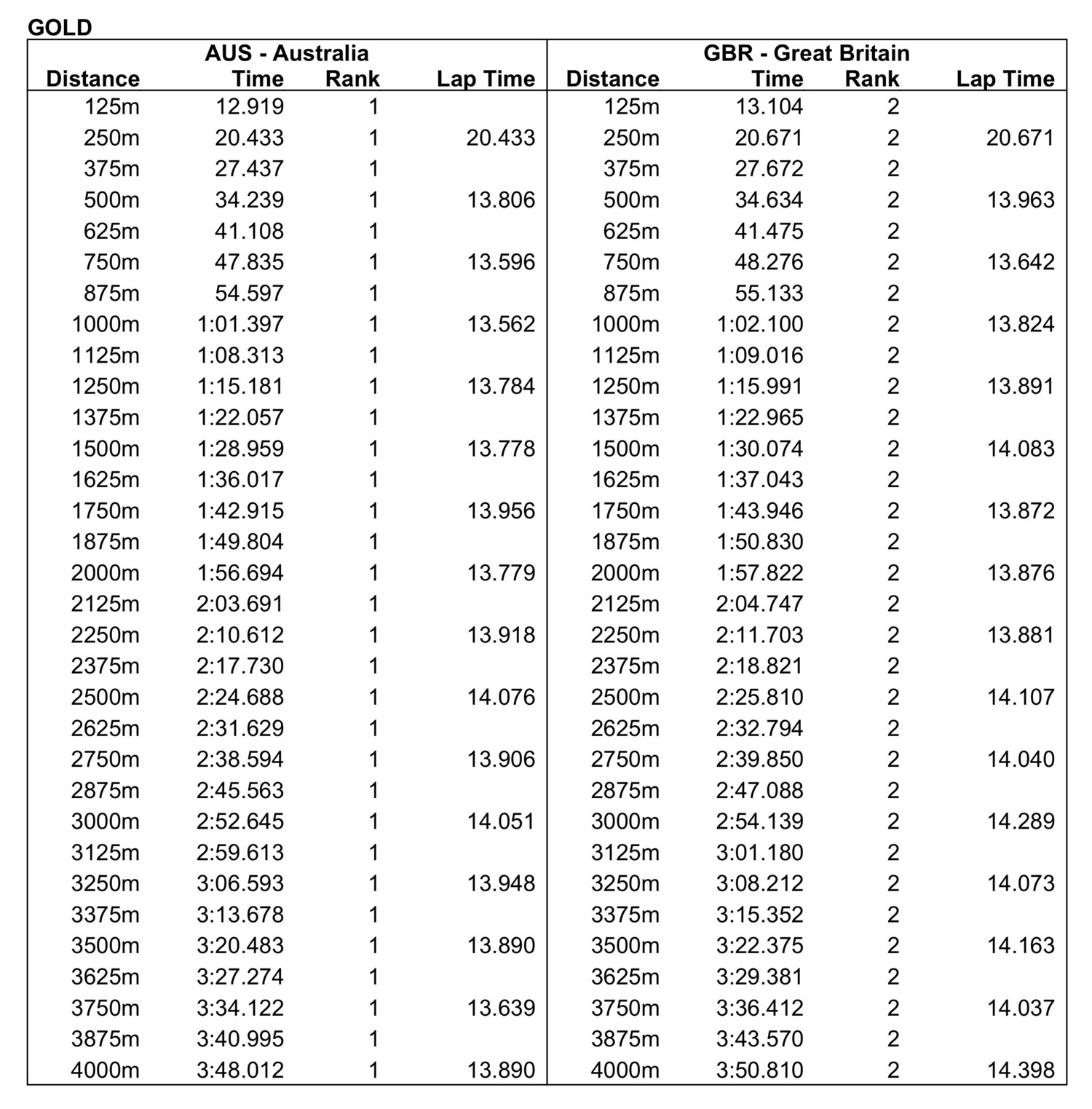 Lap-by-lap splits from the final in Puszkow (above).

It’s a time that’s so fast, it seems impossible to do from a standing start. In an era where tattoos have become ubiquitous for star athletes, Howard, O’Brien, Porter and Welsford could be forgiven if those numbers appear in ink on their bodies. If it is eclipsed – and, curiously, it seems inevitable – then the reminder of what was achieved in Poland will be worthwhile.

The world record time should be a tale that’s told for generations to come. It is remarkable and difficult to fathom.

If you know the history of the team pursuit, you’d recognise how impressive it is for any quartet to go so fast, at altitude or at sea-level. Pruszkow is at 101 metres, not very high at all.

The air isn’t rare down there. This isn’t Aguascalientes in Mexico, a track known for quick times and world records. The conditions in Pruszkow on 28 February shouldn’t have dictated the time that was set. Warm is good; cold tends to slow them down… but heating and the atmosphere of the world championships pushed them faster than ever before.

In time we’ll hear from the riders themselves – or The Fifth Member of the team, Cameron Scott, who raced the qualifying round; or indeed the coach Tim Decker who has made the team pursuit something special. But for now, we can consider the times as they appear on the analysis sheet, marvel at the speed in which they lapped the 250 metre track… and wonder how it is that they’ve achieved such a feat with virtually no media attention at all. 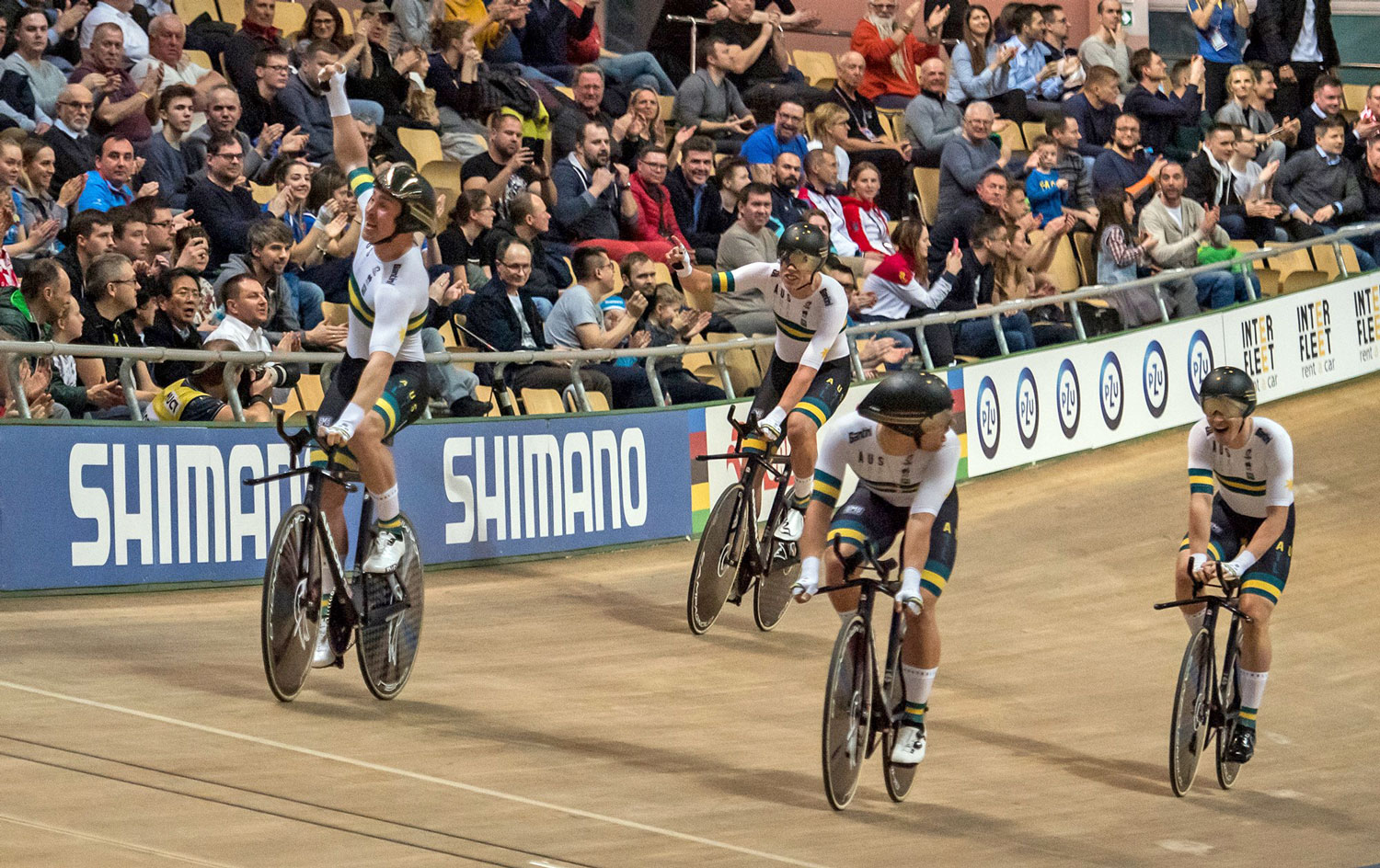 Towards the end of his first year as performance director of Cycling Australia, Simon Jones hosted a small gathering at the Super-Drome in Adelaide. He called together a group of cycling media from around the country and told them what his remit was, how he hopes to achieve his goals, and what the purpose of it all is.

Success at the Olympics is what Jones is paid to achieve. There has been a long history of Australia dominating the worlds but falling short come Games time. In 2004 that hoodoo was broken – with, of course, a world record time, 3:56.610… one that was worthy of celebration back then, but one that now seems positively slow.

Before that, Australia enjoyed Olympic success in this discipline once – 1984, when the Soviets boycotted the Games and Michael Grenda, Mick Turtur, Kevin Nichols, and Dean Woods beat the USA on a slow 333m outdoor track. That was another era, before aerobars and big gears, when cycling was still divided into professionals and amateurs, when track racing was one of the most popular forms of cycling.

It’s entirely different in 2019. Track is now the poor cousin of road cycling, a distant relative of the hugely popular MTB and BMX scenes, and yet it remains the form of cycling that gets priority from the IOC.

All other forms of bike racing are more popular in 2019 than track cycling but there will be 12 gold medals on offer at the velodrome in Tokyo (meanwhile, there are only 10 for the other three cycling disciplines: two for MTB, four for road cycling, two for BMX racing, and two for the new cycling event for 2020, BMX freestyle).

Jones has, therefore, made track cycling the focus. That’s how he can best achieve his remit. He will be pleased about the world championships success(es) – and there have been three others for the Australian team by day two of the titles in Pruszkow – but also aware that it is a step closer to his main objective.

Olympic gold is the quest and, if what has happened in Poland is any indication, Jones and his cohort are on course to meet their lofty ambitions.

“Olympic success inspires the nation, yeah?” It was a rhetorical question, delivered like a statement but with an upwards inflection and “yeah” added as if he wanted confirmation of his beliefs. Jones knows the theory behind Sport Australia’s focus on the Games: if the Aussies can win when most of the world is watching sport then, the hope is, more of the nation will get active… some may ride on to become champions but that is a by-product of the real objective.

Alas, not even the accomplishments of Howard, O’Brien, Porter and Welsford are likely to earn front-page billing. It is unlikely to even find its way to lead item on the back page. It is possible that it won’t even earn a mention.

Bike racing’s halcyon time in Australia seems to have come and gone. And, on the eve of the worlds in 2019, the only news item in a major national daily that cycling could conjure was a reference to larger fines being issue if road cyclists dispose of their drink bottles in a less-than-orderly fashion during races. The worlds? Nah, not a word was written about what was yet to come in Pruszkow.

Cycling is fantastic. There are many disciplines that engage and inspire us. There is a wealth of stars in all manner of riding. And there are times being ridden that seems actually quite ludicrous.

How can it be that four blokes could race four kilometres from a standing start at an altitude of 101m in 3:48.012?!

It has happened and those in cycling know the significance.

Jones can be proud of what was achieved. The riders know what it means. And the staff who have helped them go so fast will be chuffed knowing that, in this bout against the Poms, the Aussies came out on top.

This is a world record that deserves wider media coverage. It is one that came on a day when the Australian women’s team also earned gold in their pursuit, and when Sam Welsford backed up less than an hour after his ride in the pursuit final to win the scratch race at an average of over 52km/h.

It comes a day after Kaarle McCulloch and Steph Morton scored a gold medal in the team sprint and on the same evening that last year’s sprint world champion, Matthew Glaetzer, earned fourth in the keirin final.

This is a time when track cycling should be in the headlines and fans of cycling – no matter what discipline they follow most – should all give a nod and a round of applause for what has been achieved. This is when the cycling community should come together and utter a collective ‘Wow!’

There is more to come, and cycling is about a lot more than fast times and gold medals and overcoming traditional rivals. It is about finding inspiration and putting that to use.

For now, RIDE Media would like to acknowledge the realisation of a goal, applaud the world record, and salute those who helped make it happen.