“On a long day like this anything can happen. And in the end, I got the win. I gave it my all until the finish, it was a crazy stage.” 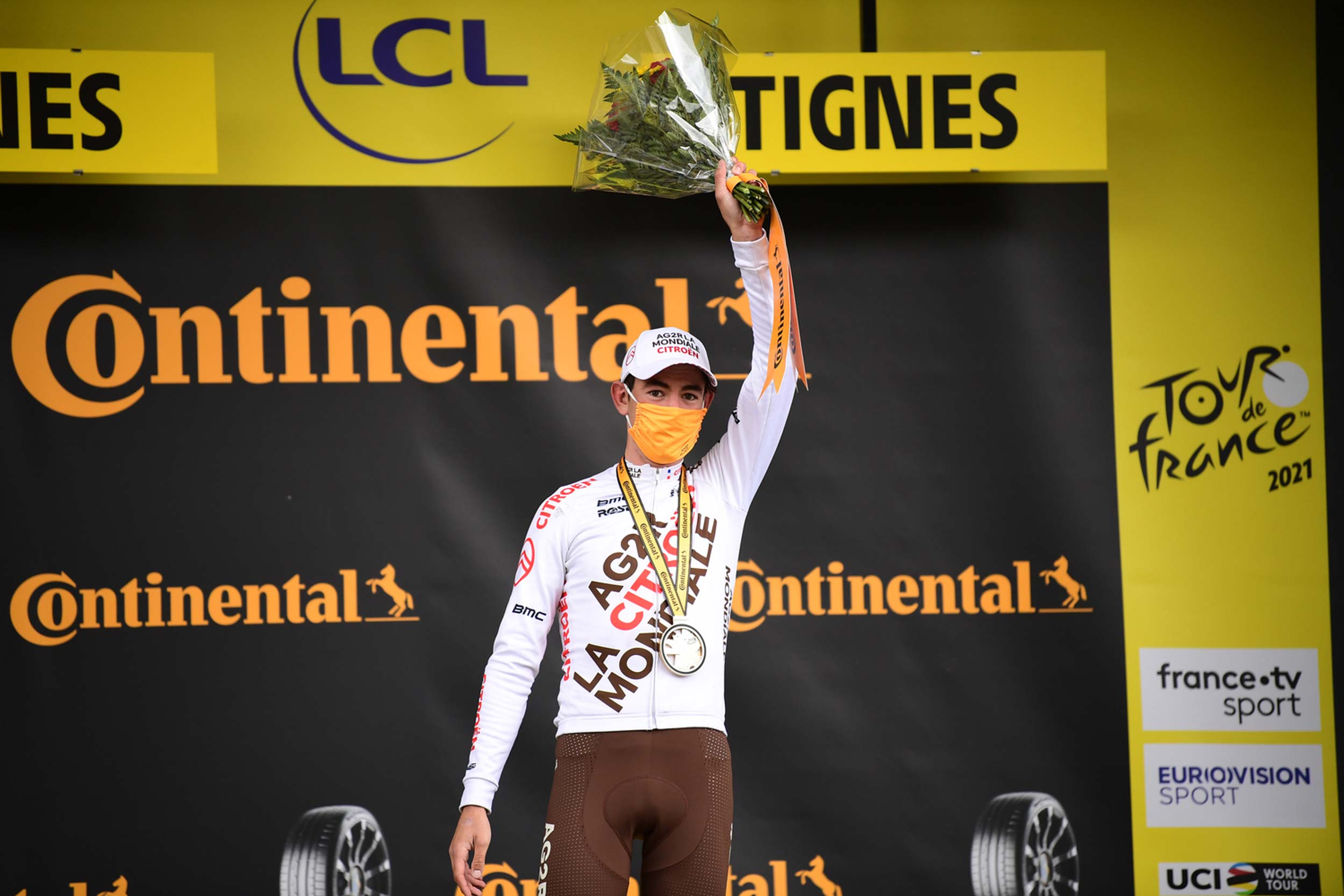 If you woke up in Australia on Monday morning and hadn’t watched the stage live, you may have found yourself rubbing your eyes after looking at the results of stage nine of the 2021 Tour de France from Cluses to Tignes. The names and numbers you see on the screen explain that this was no ordinary day for Australian cycling.

You may find yourself checking it again or pinching yourself perhaps. Is this a dream? No, it’s happening. Ben O’Connor is now the closest challenger for Tadej Pogacar’s yellow jersey. It’s true and to fully appreciate the significance of this achievement, it’s well worth clicking the link on ‘SBS On Demand’.

Over almost five hours, you get to witness the talents of a new GC star from Australia.

Ben O’Connor winning a stage shouldn’t surprise anyone. He’s racing Le Tour for the first time and went to the Grand Départ in Brest at the end of June knowing that he could achieve a good result. That’s already happened. Victory in Tignes. Victory in the Alps. Victory in a mountain stage. Victory on his own. A victory to remember.

For some background on Ben O’Connor, click the links to long interviews from 2019 and 2021 (above).

Scan his CV and you realise it was always on the cards. O’Connor’s win in the Giro d’Italia of 2020 has similarities. When he won at Madonna di Campiglio in stage 17 last October, he demonstrated his climbing ability and gave Australian cycling fans reason to cheer.

He has endurance and tenacity and he put these on display again in this year’s Tour de France on the eve of the first rest day. When he wins, he does it in fine style: on his own, on the climbs, ahead of the world’s best.

“Participating in the Tour de France was already a dream,” he said after stage nine. “Winning is a huge bonus.”

Being ranked second-best rider in the Tour de France after the visit to the Alps is an even bigger bonus. And although it would take a nasty twist for Pogacar to surrender the yellow jersey that he seems destined to win, the strength and commitment shown by O’Connor have elevated him in the rankings. He now sits just 2:01 behind the Slovenian superstar who actually saw his GC lead under threat by the West Australian. 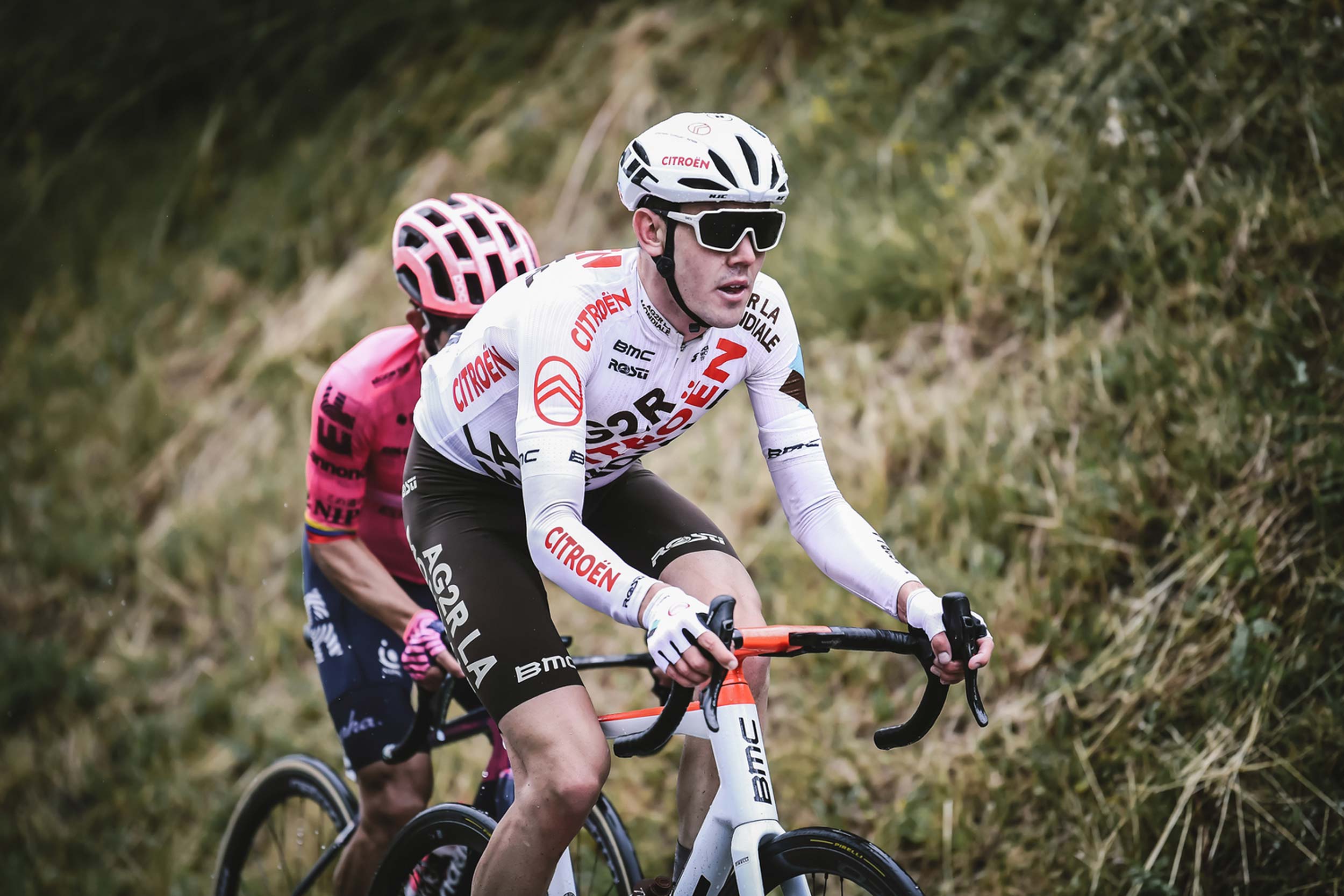 It may have been a short stage, but the 144.9km race from Cluses to Tignes was done in brutal conditions, tough enough to eliminate seven riders who finished outside the time limit.

“I hadn’t really intended to go in the break,” explained O’Connor, “so I wasn’t certain what I should do in the breakaway.

“I saw that we had five minutes early on, so we could gain time in the general classification.”

Five minutes turned to over nine minutes at one point. And O’Connor was not only relishing the chance to potentially win the stage, he was also the virtual leader of the Tour de France!

With 55km to go, O’Connor enjoyed strong company on the wet roads of the Cormet de Roselend. At the front of the stage, he raced alongside Nairo Quintana and Sergio Higuita, two Colombian climbers of repute. 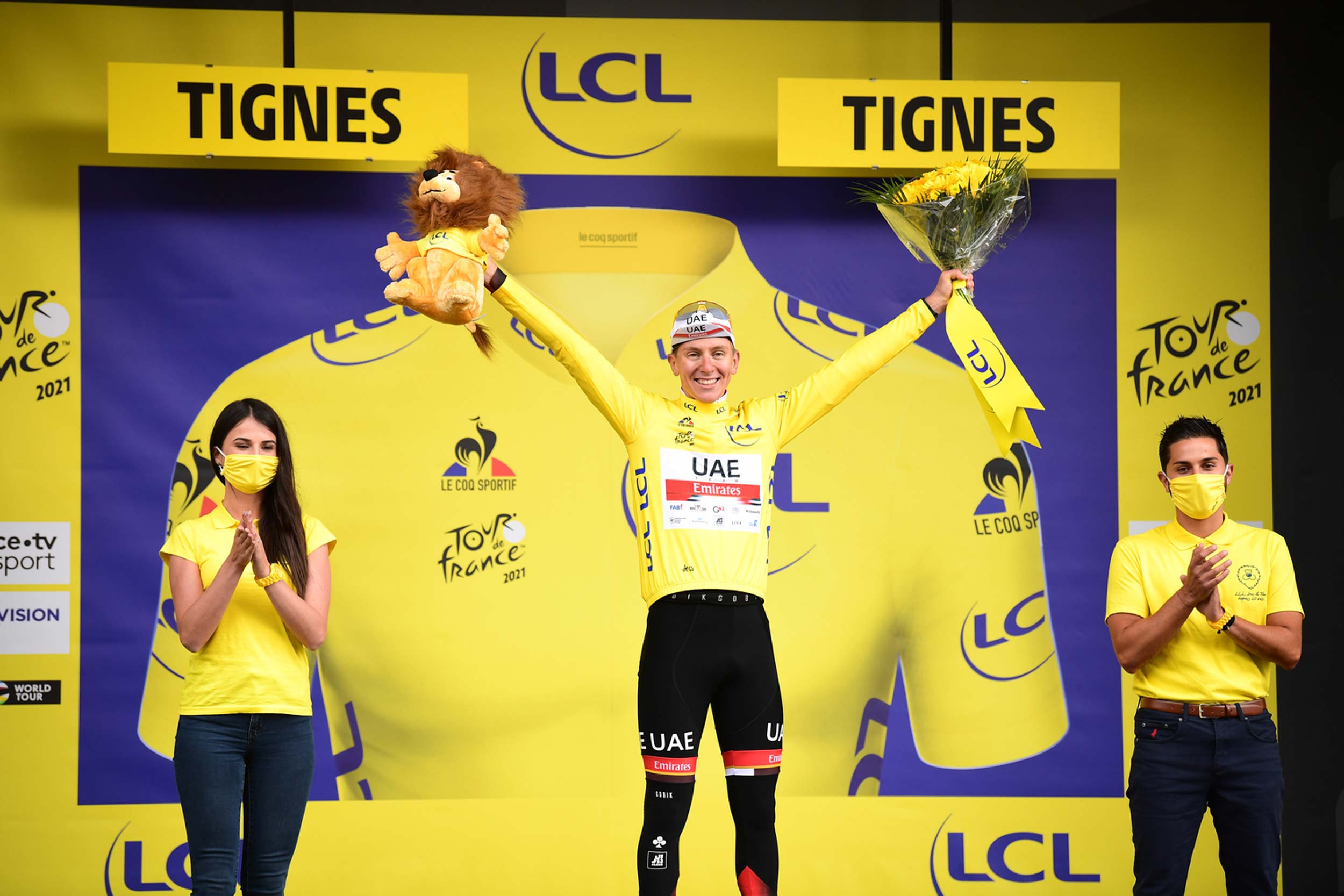 Tadej Pogacar retains the yellow jersey. He now has a lead of 2:01 over the next best rider, Ben O’Connor.

Had all gone according to the usual script, the Aussie would have capitulated to the pace of Quintana and his compatriot, but this is Le Tour 2021, and nothing is normal. Instead of the Colombians dancing off into the distance, it was O’Connor who increased the tempo and eventually found himself on his own at the front of the stage.

Just as he did at the Giro, O’Connor crossed the finish line with daylight behind him. He had over five minutes in Tignes to reflect on what had just happened before the next best rider in the stage reached the finish.

It was enough time for the reality of the moment to sink in. An Australian is now in podium contention at the Tour de France.

Pogacar still leads GC, but that’s about the only similarity in the results from stages eight and nine. The rest of the contenders could do nothing to tease any time out of the dominant Slovenian who eventually took matters into his own hands, attacking an elite group of riders on the final ascent to whittle down his deficit to O’Connor. 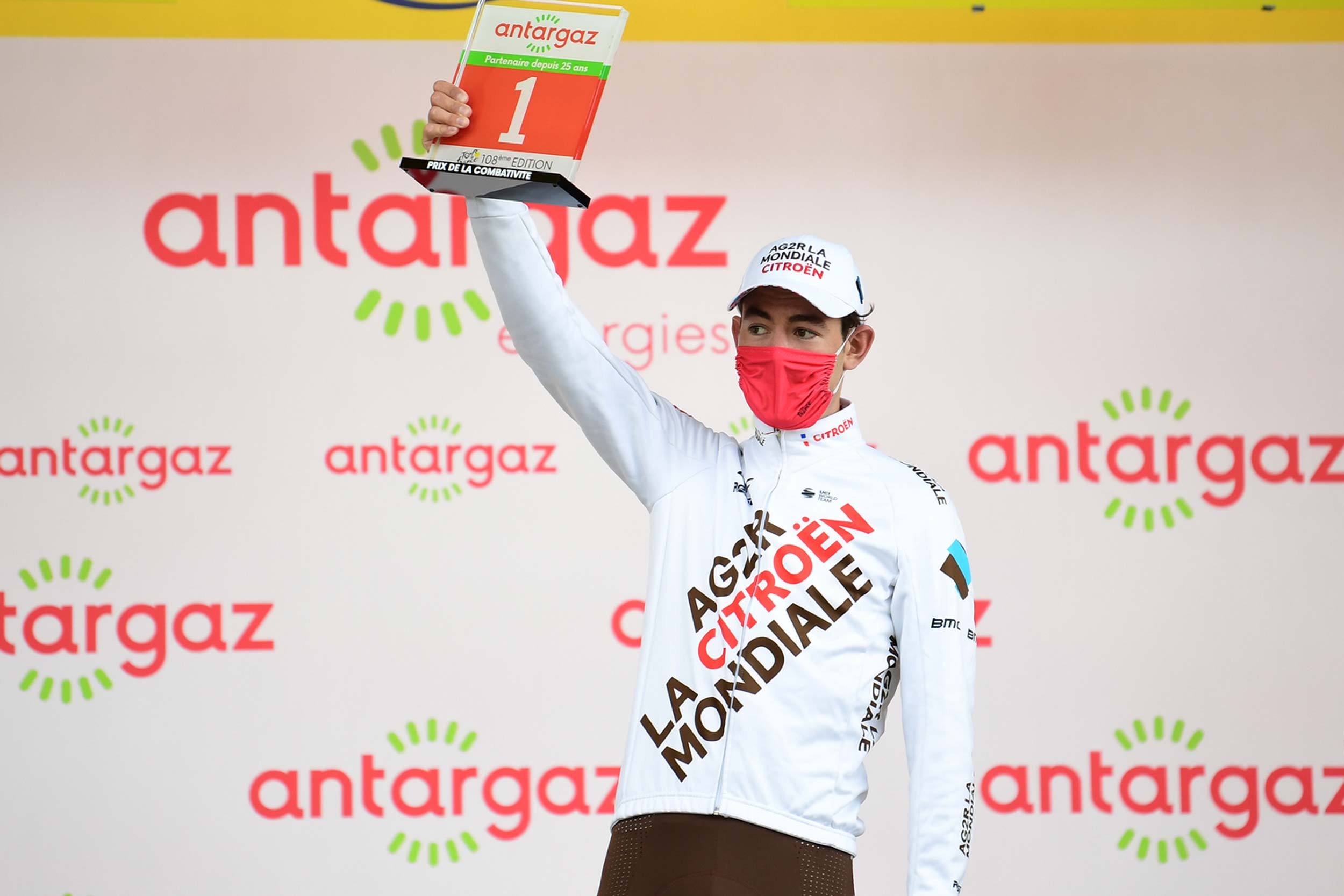 Stage winner, 2nd on GC after the Alps… and the winner of the ‘Fighting Spirit’ prize of stage nine.

The virtual lead would eventually evaporate but that doesn’t take any gloss off what O’Connor achieved in what was a remarkable day for a gifted rider who is enjoying a fantastic TDF debut.

At the finish, Pogacar was 6:02 behind O’Connor and the Slovenian will ride another day – and, likely, another two weeks – in the yellow jersey. He now understands which of his rivals he needs to mark the most.

The 25-year-old from Fremantle jumped up the rankings, from 14th to second. He dominated on a day when most others simply survived.

Quintana, Higuita, and all others who had dared to attack on the road to Tignes had ambitions to improve their rankings. Some did, but some faltered. And the magical Tour of 2021 continues, with more surprises than we ever imagined and a new cast of GC challengers lining up to see if Pogacar is indeed fallible. 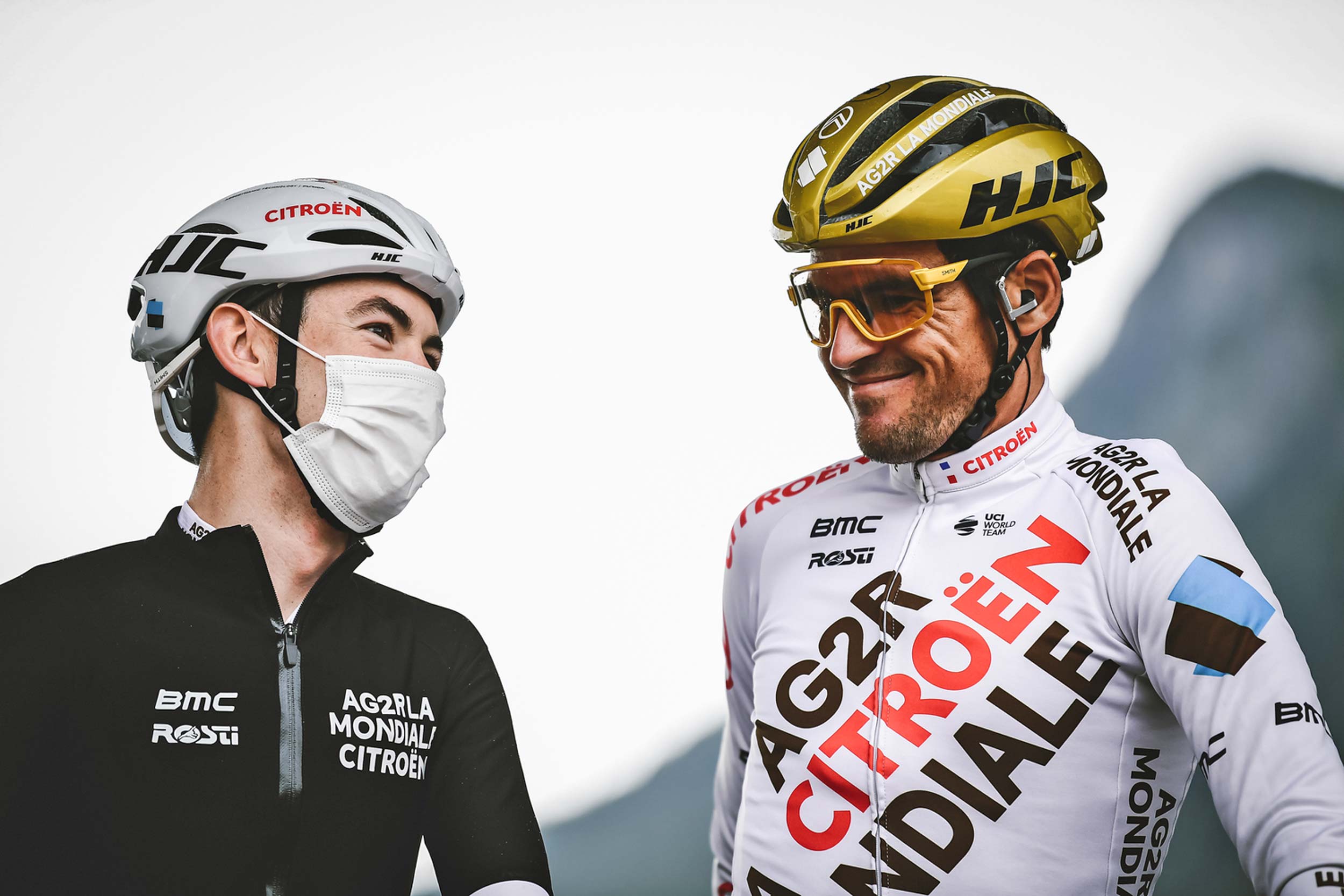 O’Connor and Van Avermaet before stage nine. They would finish first and last, respectively, in Tignes.

O’Connor in Tignes: a win for the ages

“Moments like these bring everyone a lot of joy.”

For Australian sport fans, there is indeed plenty of joy.

O’Connor arrived at the French team at a time of significant change. For years AG2R La Mondiale, as it was known until Citroën’s arrival as a title sponsor in 2021, built its season around a GC campaign at the Tour. With the likes of Jean-Christophe Péraud and Romain Bardet, it was a team that could challenge for the podium… but they have since moved on and the script was meant to change.

In 2021, the arrival of Greg Van Avermaet and the departure of Bardet was meant to herald a new beginning, when stage wins became the aim again, and the quest for GC honours could settle momentarily.

Racing for the podium of the Tour de France is a stressful undertaking. The constant need for vigilance for ±90 hours of racing over three weeks is exhausting, physically but also mentally. And not a lot of riders are up to the task. 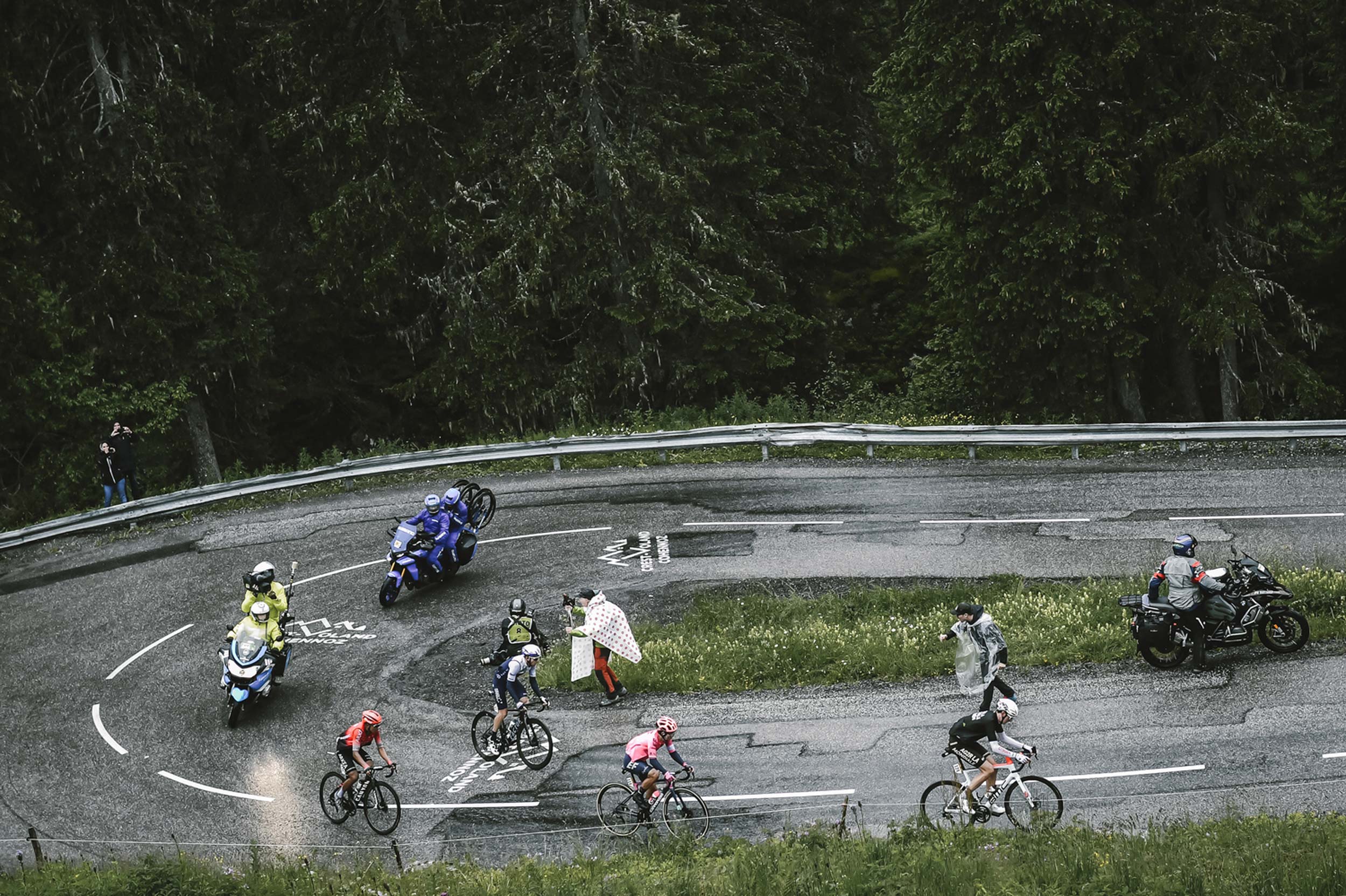 At the Tour de France, there is usually only a handful of riders who harbour any genuine GC ambitions. We know the names, understand their strengths, and recognise the value of solid team support. That’s how it has been for years at the biggest bike race in the world.

There’s a list of favourites and we marvel at the consistency they show when it comes to climbing mountains and extracting time from their rivals. We see the team support the likes of Pogacar – and many before him – receive when they’re chasing the yellow jersey.

What makes O’Connor’s rise to second overall all the more amazing is the solitary nature of his ride to Tignes.

There wasn’t any value in having Quintanta or Higuita along for company, and so AG2R’s Aussie recruit jettisoned the pair once the pace of the yellow jersey’s peloton increased. UAE Team Emirates riders set a solid tempo once it became apparent that O’Connor wasn’t ceding any time on the climbs.

The maximum advantage for O’Connor peaked at a little over nine minutes. He began the stage with a deficit of 8:13 to Pogacar, and for a while it seemed like the Slovenian and his team would be willing to allow the Australian to take the yellow jersey.

Instead of wasting energy chasing an escapee, Pogacar’s team would mark the GC rivals in his group and make sure there were no surprises on a cold, wet, difficult day in the Alps.

All eyes were on the usual suspects in that elite group. If Carapaz or Vingegaard or Uran could accelerate, they’d have done so… but they were within sight of the Slovenian race leader and they knew any attack would likely have been matched by Pogacar.

Based on what he did in stage eight, they also knew he’d then crush their spirit by accelerating ahead at such a pace that they’d end up demoralised – and further behind on time by day’s end.

Meanwhile, nothing could make a dent on O’Connor’s gains. Up ahead he raced with conviction, with concentration… with spirit.

“The race was completely crazy,” said O’Connor at the finish. But he managed it all with composure. He pulled off the win that may have surprised some, but it’s a result he knew he was capable of. And he’s now got plenty of others, Pogacar included, paying attention to his all-round ability.

“There is a lot of joy now,” said O’Connor, the stage winner, the winner of the ‘Fighting Spirit’ award… the nearest challenger to the yellow jersey after the 108th Tour’s visit to the Alps. “I find it difficult to control my emotions.”

That’s perfectly understandable. It was a race to remember, one that has heralded the arrival of Ben O’Connor as a true podium challenger at the Tour de France.

The restructure at AG2R Citroën has paid off, but instead of the Olympic champion being the biggest star, it’s the TDF debutant from Western Australia who is in the box seat. O’Connor was the best in the wet, the best on the climbs, and he’s now the best of the challengers. (Meanwhile, in a touch of irony, the last rider to reach the finish inside the time limit was… yep, Greg Van Avermaet. A star recruit who struggled on the day his team-mate shone.)

Be proud of the ride Ben, and know that there are a lot more people now paying attention. It’s not just Australian sports fans but also the riders who had gone to Brest believing they could win Le Tour.

He’s now a stage winner at the Tour, but that’s not the last we’ll see of O’Connor this July. It might have been a brutal, cold day on the race but he’s just getting warmed up.