Bernal vs Thomas vs Froome: the question of leadership at Team Ineos

Chris Froome is now due to depart Team Ineos at the end of 2020. He’s off to Israel Start-Up Nation to see out his racing days, but first the question of leadership at the upcoming Tour remains. Who will it be? Froome, the defending champion Egan Bernal, or last year’s runner-up and winner in 2018, Geraint Thomas? 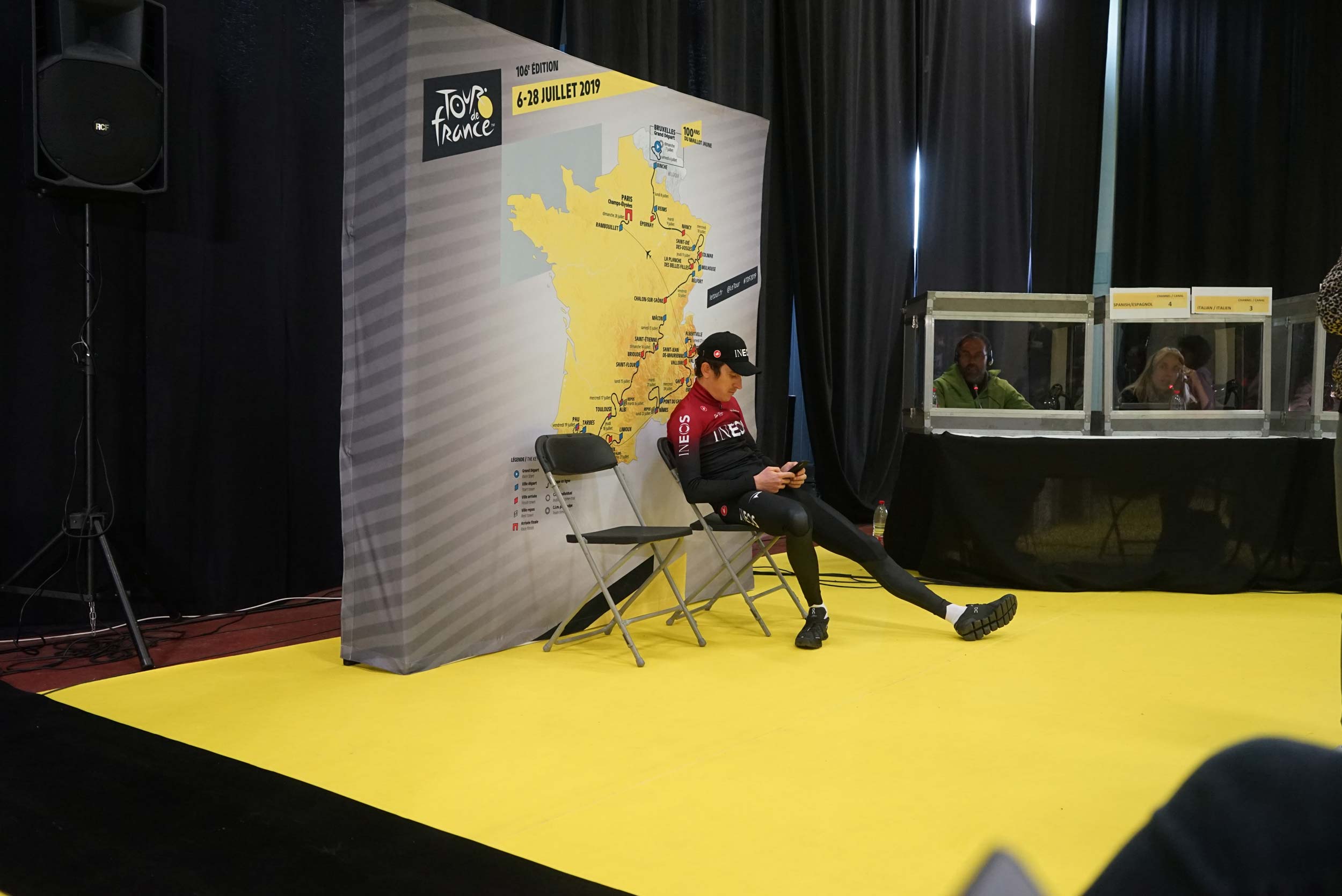 The defending champion and soon-to-be runner-up of the 2019 Tour de France after stage 20 last year. Geraint Thomas was later asked by RIDE Media about leadership in 2020. He smiled and replied: “Next year? Oh, I don’t want to think about that yet. I just want to go to Paris and enjoy a bit of down time.” (Photo: Rob Arnold)

A day before the end of last year’s Tour de France, Geraint Thomas sat in front of the media centre at Val Thorens. He had just finished fifth in stage 20, the final day in the mountains. Just to his left as he crossed the finish line was the rider in the yellow jersey. The Welshman raised his right arm and freewheeled those final few metres with his hand on the back of Egan Bernal.

It’s an image that speaks volumes, at the heart of it is the sentiment: Congratulations. You did it!

The Colombian finished fourth in that 20th stage but his position didn’t matter, rather finishing ahead of his GC rivals was the quest. He did that and, out of courtesy, Bernal’s closest rival, Thomas, made sure he followed his team leader across the line. 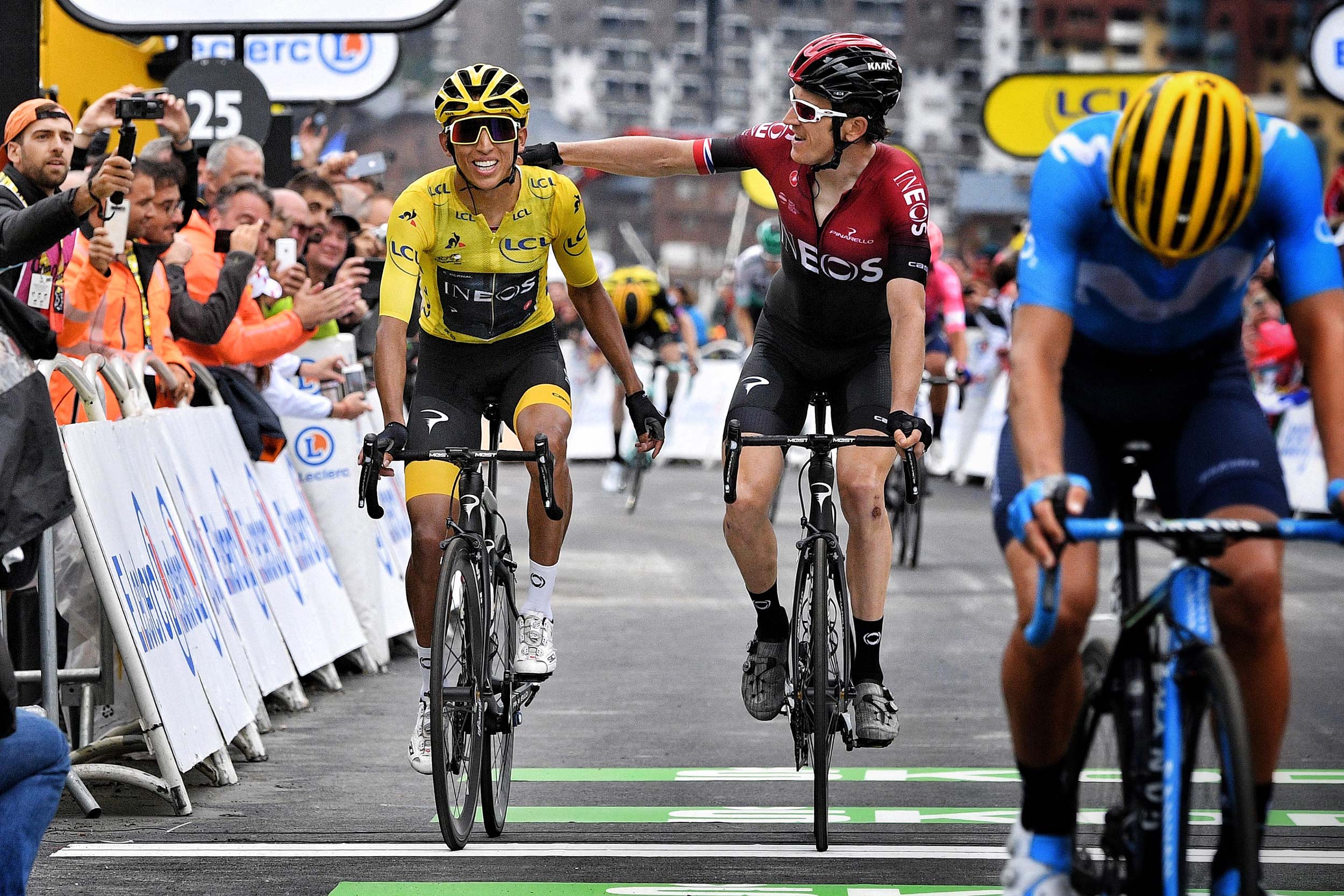 Stage 20 of the 2019 Tour: Bernal’s first day in the yellow jersey… and he reaches the finish at Val Thorens alongside Geraint Thomas. (Photo: ASO)

The respect – admiration even – is obvious in the image: the two most recent winners of the world’s biggest race grinning, one stage to go and 20 behind them, Bernal and Thomas, first and second overall at the Tour de France of 2019. 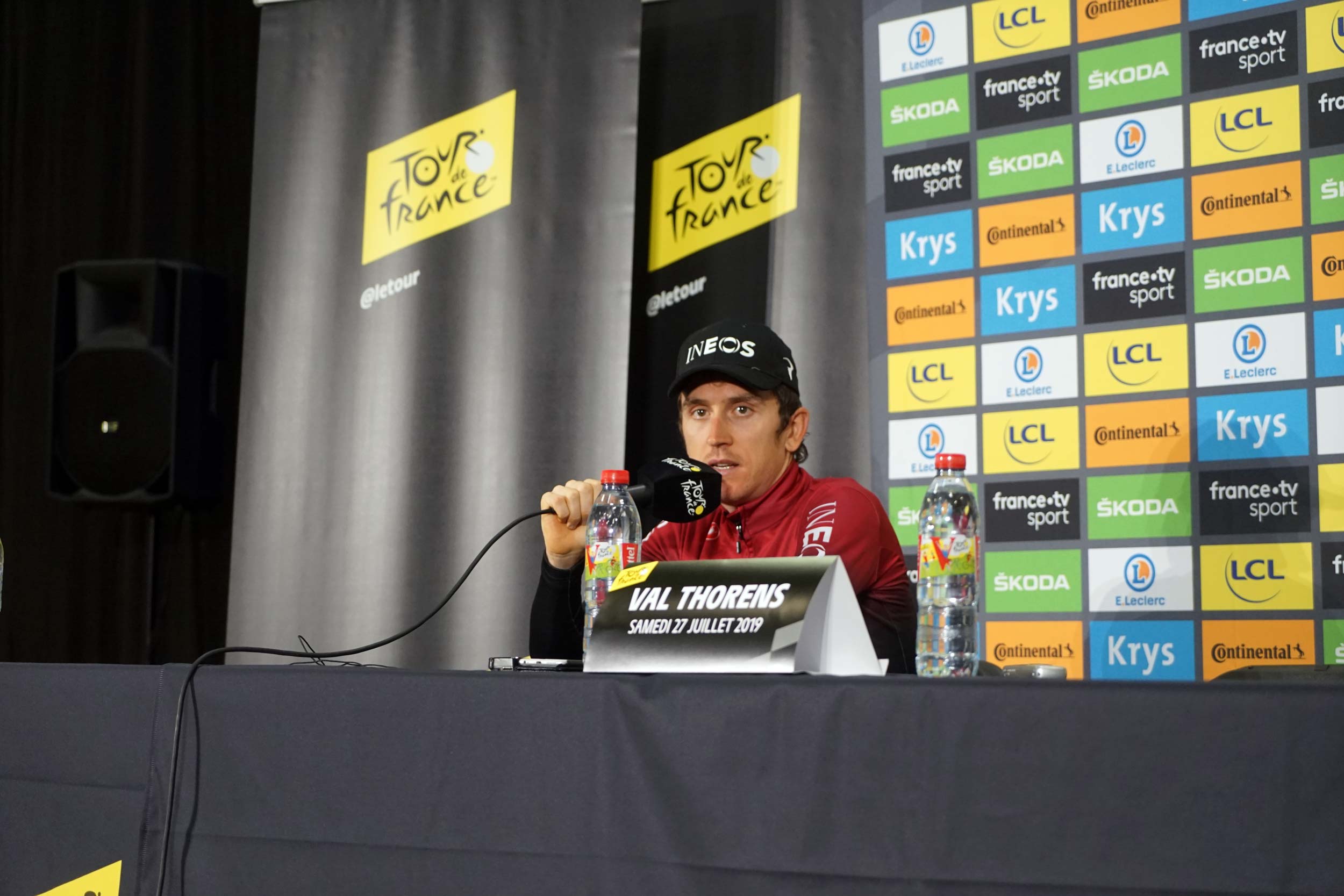 Thomas answers questions from the media after stage 20 of the 2019 Tour. (Photo: Rob Arnold)

There was a volley of questions for Thomas in that media centre on the mountain. Most of them related to Egan Bernal, the youngest champion since the 1909 edition.

At the end of the media conference, I squeezed in one last question.

Obviously it was a different race without Chris here, I said. Would it have been a trio of leaders – or co-leaders – had he been here, and will that perhaps be the case in 2020?

We’ll never know because Chris Froome didn’t race. He was still laid up with a broken leg but again there was respect from Thomas for a rider who has won the Tour, and done so as a team-mate.

“Froomey is one of the greatest Grand Tour riders ever, if not one of the best.

“He’s strong, physically. But he has mental aptitude as well and he’s definitely going to come back stronger.”

It was an appraisal few would argue with. Froome may have been injured but he was still a team-mate and both Bernal and Thomas understood that leadership status wasn’t destined to be theirs alone, just because they’d won a couple of Tours between them. 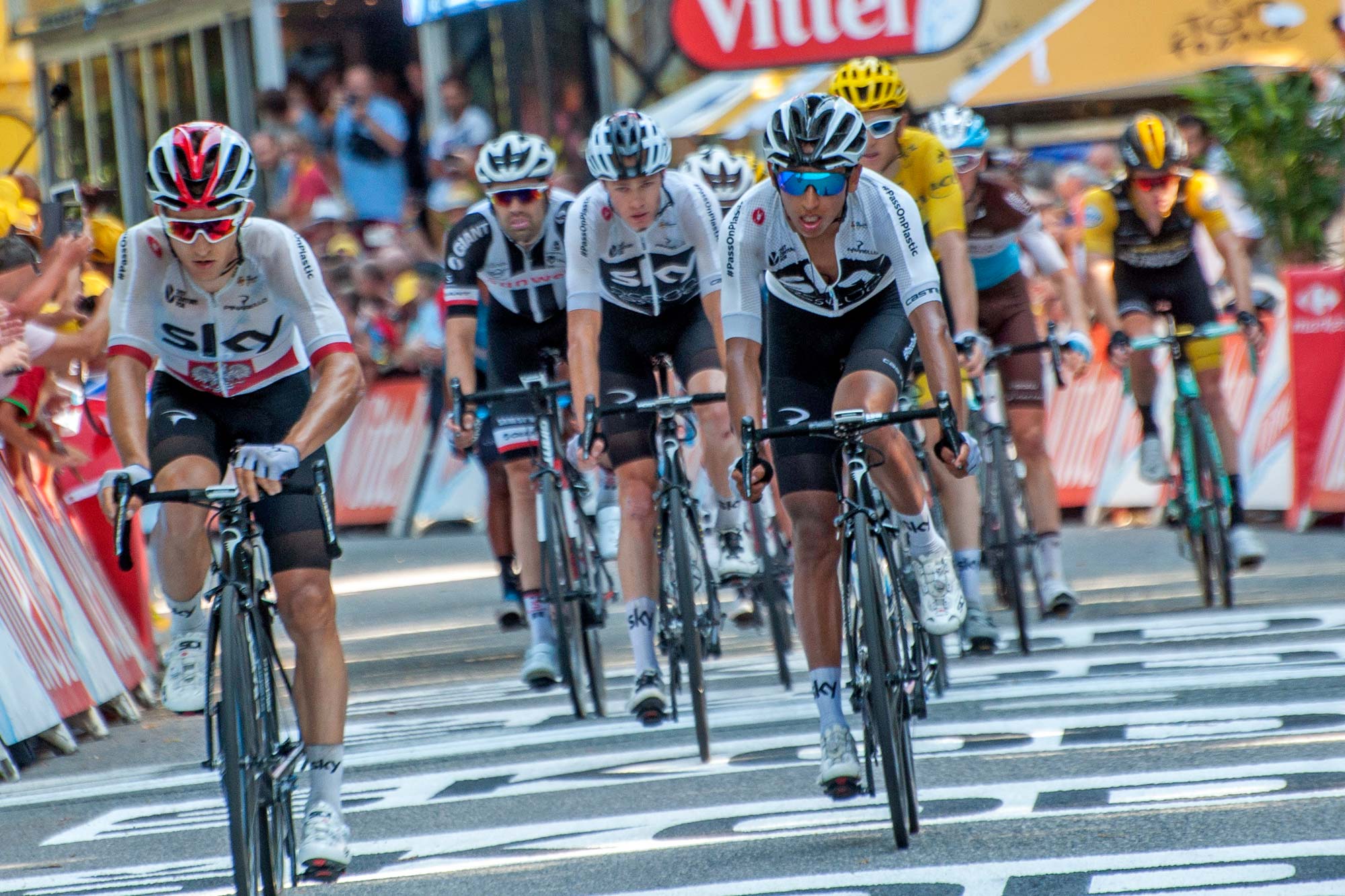 In 2018, Bernal was 21 and learning quickly from some of the best riders in the world… the Colombian was a domestique deluxe… but now he’s earned leadership status too. (Photo: Jean-Pierre Ronco)

Still, a “trio of leaders” is how Ineos has pitched the team’s approach for 2020, even when there’s been little racing and barely a chance to see who is riding best. Ultimately, however, it seems that the ambiguity surrounding leadership status has given the eldest of the three reason to move on.

It’s yet to be signed but the contract is ready and Froome has signalled his intention to leave Team Ineos. Before that, there’s the Tour de France of 2020. Will the respect that this trio has always displayed for one another continue through to the end of September?

Questions like this will be repeated often over the next 50 days and then, if all goes to plan, there’ll be the Grand Départ in Nice on 29 August.

It’s a shorter journey for Froome and Thomas but Bernal has plans in place to ensure he’s able to be back in France to defend his title. Between now and Nice, there is much to consider. Until now, it’s been said that the road will decide who earns leadership. That’s how it was in 2018 when Thomas was in the form of his life and Froome faltered slightly, finishing third. That was his last appearance on a Grand Tour podium but the rider has always said it won’t be his last.

It’s been a while since he won, but the record books suggest that Froome deserves to be the protected rider. Four Tour titles, second place once, third place once, 58 days in the yellow jersey, 11 Tour stage wins… there is a long list of accomplishments, even if we only consider what he’s done at the biggest race of all.

In contrast, Thomas has one Tour title and one second place to his credit, he’s enjoyed a total of 15 days in the yellow jersey, won four stages…

And Bernal, after just two starts, has one title, no stage win and he’s worn the yellow jersey for only two days – the most recent two days of the Tour, Saturday and Sunday, 27 and 28 July 2019. 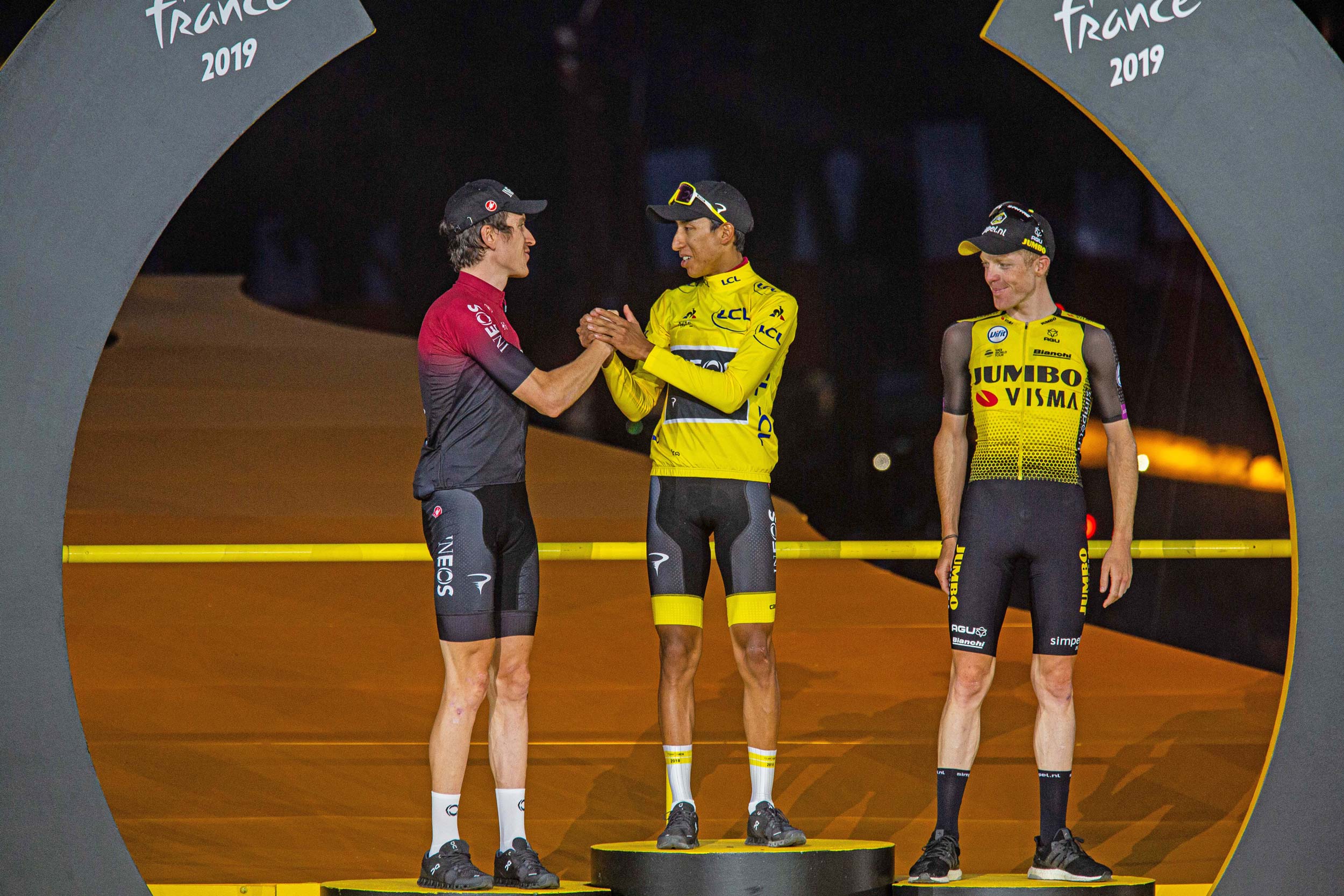 Still, it was obvious well before 2020 that Team Ineos’ management was beginning to think about a future without Froome. At 36, he’s arguably more motivated than ever. He’s enjoyed incredible backing from Sky / Ineos and yet he would rather not let the road decide. He would rather know, as he did for years, that he is going to be The Leader – and thus he has decided it is time to move on.

And yet, even with his admission that Froome’s contract wouldn’t be renewed, Dave Brailsford was sincere in his glowing appraisal of the four-time Tour champion.

“Chris has been with us from the start,” says Brailsford in the official statement from Ineos about the pending end of the partnership, issued overnight. “He is a great champion and we have shared many memorable moments over the years but I do believe this is the right decision for the Team and for Chris.

“Given his achievements in the sport, Chris is understandably keen to have sole team leadership in the next chapter of his career – which is not something we are able to guarantee him at this point.

“A move away from Team Ineos can give him that certainty. At the same time, it will also give other members of our Team the leadership opportunities they too have earned and are rightly seeking. I am excited about the talent we have right across the Team at the current time and all our collective focus is on preparing for the season ahead.” 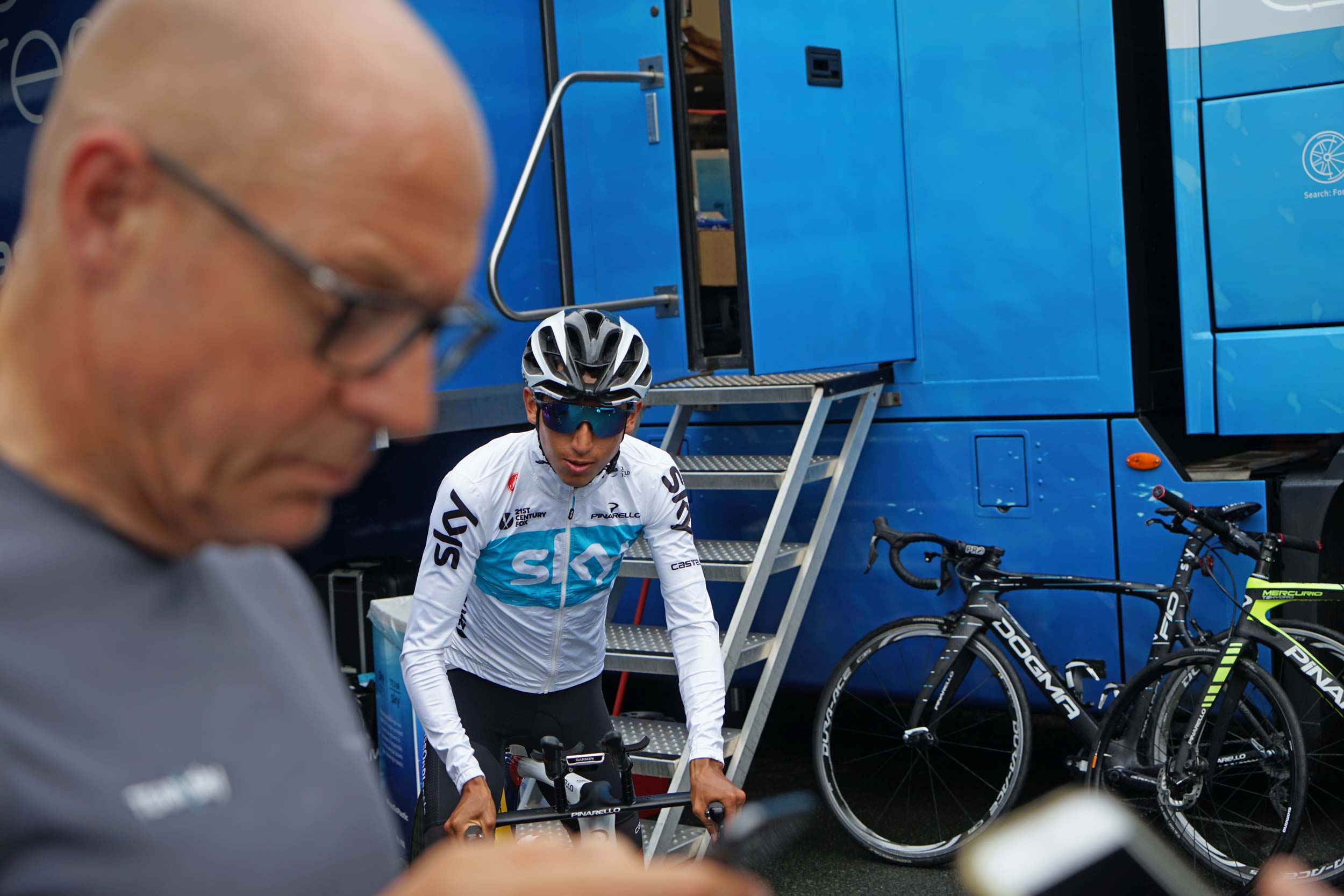 Two years earlier, on the final Saturday of the 2018 Tour – when Geraint Thomas was about to seal his overall victory in the time trial – I spoke with Brailsford about his compatriot in the yellow jersey and the future champion, Bernal.

With the question of leadership a hot topic again in July 2020, let’s revisit the appraisals Brailsford offered for Thomas and Bernal almost two years ago.

“The thing about Geraint is: you’re not going to find many people who have got a bad word to say about him,” said Brailsford while standing by the Team Sky bus at the start of the stage 20 TT in Saint-Pée-sur-Nivelle.

“I think he’s genuine… he’s renowned for being a grafter, as being a worker.

“Ever since he was young [when] he joined the British cycling program he has worked very, very hard at squeezing every last drop out of himself. Then, over the years, he’s stuck with it. When he’s had his setbacks or it hasn’t quite worked for him, he’s never given up. He’s never changed anything or said, ‘Okay, I’m not going to buy in anymore…’ He’s stayed focused and he’s got his just rewards.” 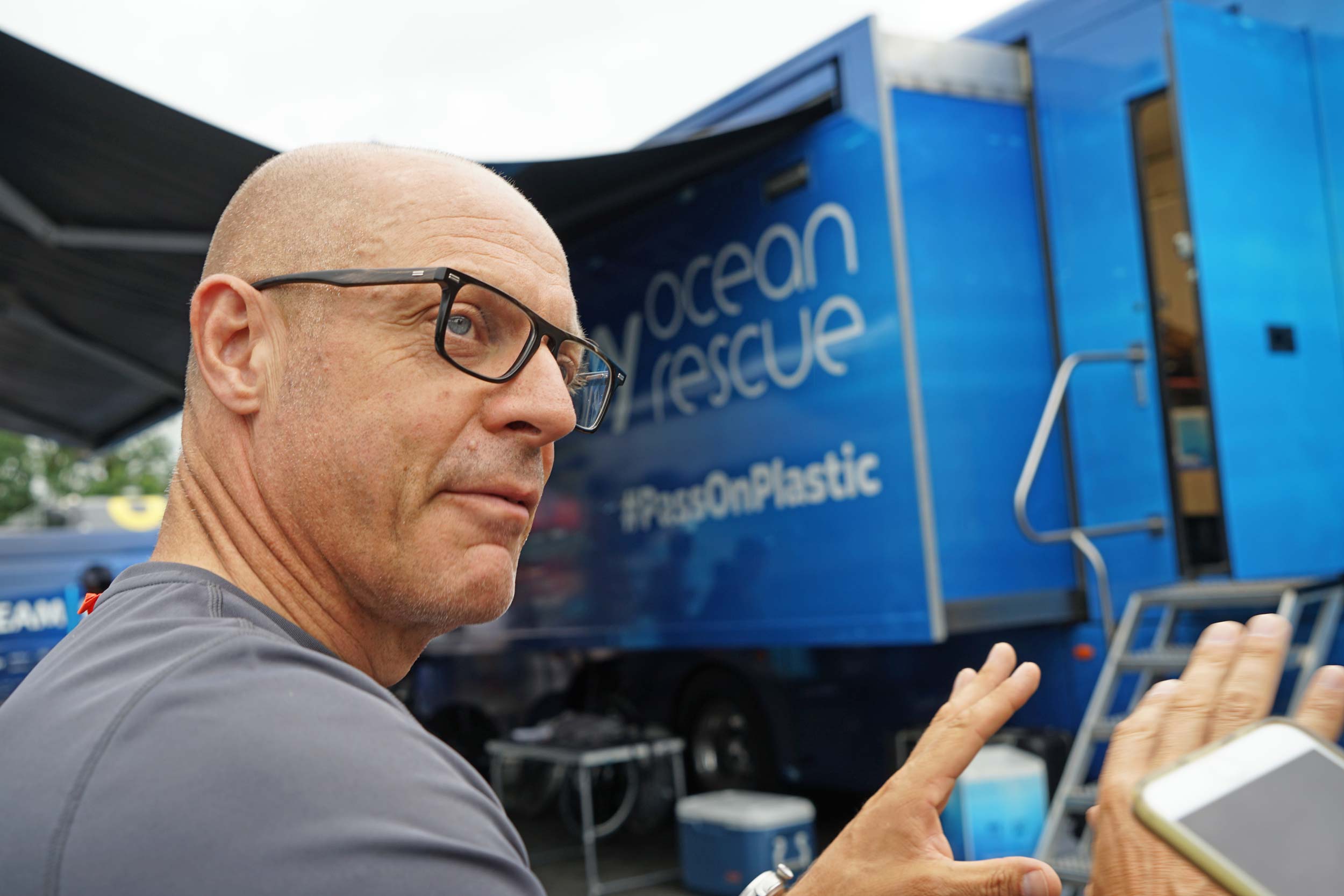 Are you now going to look to Egan Bernal as the successor? I asked Brailsford on 28 July 2018. What does the future of Team Sky look like?

“I think in Egan we’ve got a young talent and it’s exciting,” Brailsford began.

His eyes lit up and he pointed around at the pit area where home trainers were buzzing and riders sweating during the early phase of their warm-up rituals.

“And I said, ‘You’ve got two guys here who have done it before – Thomas and Froome – and I want you to watch them like a hawk today, because not many people get the opportunity to learn from these guys.’

“So, whilst on the one hand we’ve got Geraint and Chris riding for the podium and trying to get a big performance, on the other hand – as long as you give it a bit of attention – you couldn’t get a better learning environment for a young guy like Egan to be in at the minute, to try and get him to perform in the future.

“And I’m excited by it, I must say. I genuinely am excited about having Egan on the roster.

“He’s a prodigious talent and then the big question is: can he take that and kind of translate that into a winning performance?”

Within a year, he knew the answer. Bernal didn’t have to focus on pacing in a TT when he had the yellow jersey for one Saturday in 2019. He had to climb a mountain, he had to monitor his rivals, he had to continue learning from ‘G’ and, in his second Tour de France, he would indeed go on to demonstrate his class.

Although cycling is a cosmopolitan sport, there is still a sense of parochialism. So, I asked Brailsford, how is it to have a young Colombian on the roster, a rider with the potential to become the best cyclist of his generation? How does that sit in the Team Sky infrastructure, where it is a team with such British heritage…? Could he, I asked, imagine a Colombian winning the Tour for Team Sky?

Brailsford: “Yeah, yeah, yeah. I don’t think a Colombian has won a Tour, have they?”

Of course he knew the answer, but he offered a cheeky grin as he spoke, and then he concluded: “So, why couldn’t we be the first team to have a Colombian win the Tour de France – that’d be pretty good fun.

“So, you know… that’s probably where we’ll be heading.”