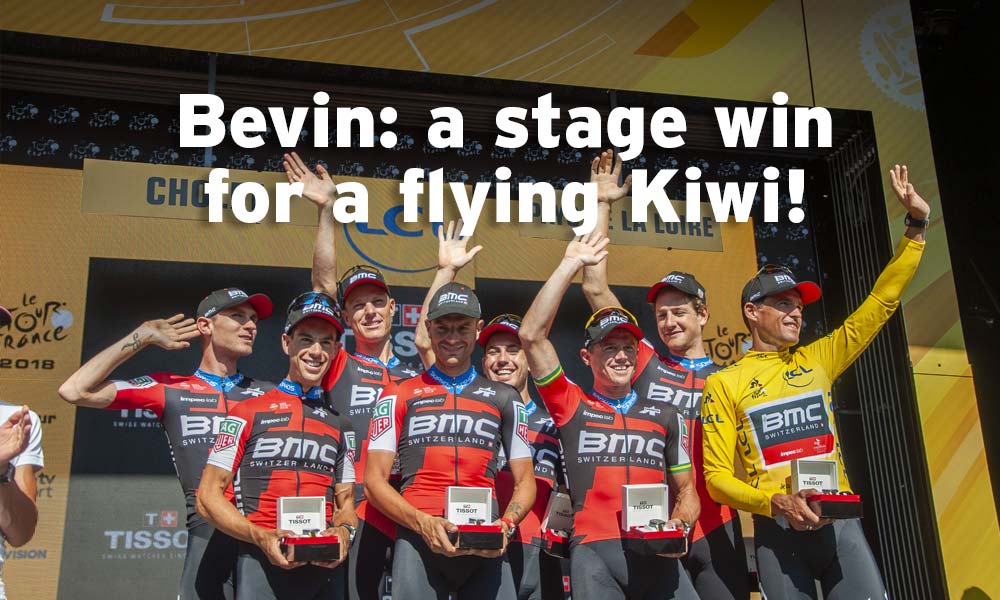 With the BMC Racing Team finishing four seconds ahead of Team Sky in stage three, a bit of Kiwi cycling history has been created. Patrick Bevin is a stage winner.

The unheralded ones deserve some attention more than once in a while. But it’s not always possible to tell the stories of everyone who rides the Tour de France. Patrick Bevin is far from an also-ran; he is a rider with a huge engine who has earned a lot of respect from his peers in the peloton and management of pro teams alike.

In New Zealand, the 27-year-old gets people talking about cycling. He’s a Taupo local and cycling prospers in that part of the country. It’s the home to a massive, 41-year-old mass participation ride that caters to riders of all abilities and, of course, Bevin has won that event… a couple of times.

He has earned a few victories in pro races along his way to his second start in the Tour de France but in Cholet after stage three, he stood on the podium as a stage winner in the world’s biggest race.

BMC Racing considers the New Zealander to be a pivotal part of the line-up that covered the 35.5km course at an average speed of 54.994km/h.

Bevin was one of the five – also including Greg Van Avermaet, Damiano Caruso, Richie Porte and Tejay van Garderen – who finished together to post a time of 36 minutes 46 seconds. Mission accomplished! 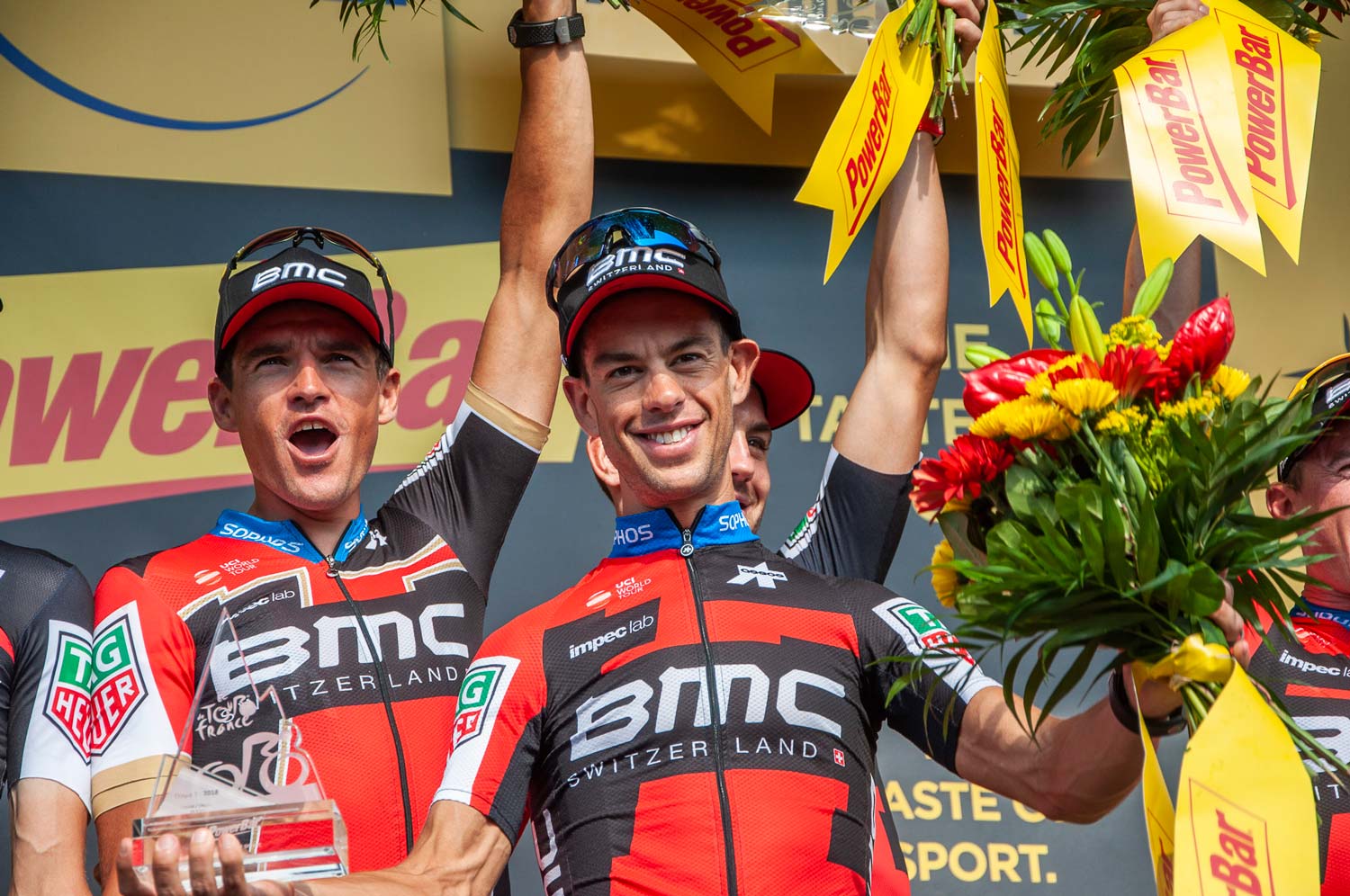 Greg Van Avermaet and Richie Porte, on the podium in Cholet; it was a day when Richie Porte could also (finally) call himself a stage winner at the Tour de France.

“The motors like Stefan Küng and Paddy Bevin are the ones that set the pace,” sporting manager, Allan Peiper, said before the stage, “and everybody else in the team basically rides to the capacity of their potential.”

In other words, in a team packed with megastars – including one of the favourites for the overall title in 2018, Richie Porte, as well as the new race leader, Greg Van Avermaet – Peiper recognises the value of Küng and Bevin more than others.

Küng is a former individual pursuit world champion and Bevin has won multiple national championship medals over the years but in Cholet, he has matched the efforts of his compatriots Chris Jenner and Julian Dean: each have earned victories in a TTT at the Tour before 2018, making the pair the only Kiwis to have won a stage in this race until today.

Jenner created history in 2001 when he was part of the Crédit Agricole line-up at the Tour; Stuart O’Grady wore the yellow jersey that day and the New Zealander was up on the podium with his mates after a filthy, wet stage to Bar-le-Duc. Ta dah, he was the first Kiwi stage winner but, well… not quite. See, he lived in France a long time and, at the time, he was registered to race as a Frenchman.

In 2011, when the TTT of stage two was contested in Les Essarts, nearby where the race was today in Cholet, Dean was part of the Slipstream line-up.

And so, Bevin has duly become the third New Zealander to win a stage of the Tour… and each time, these conquests have been achieved in team time trials, but it doesn’t make them any less significant. 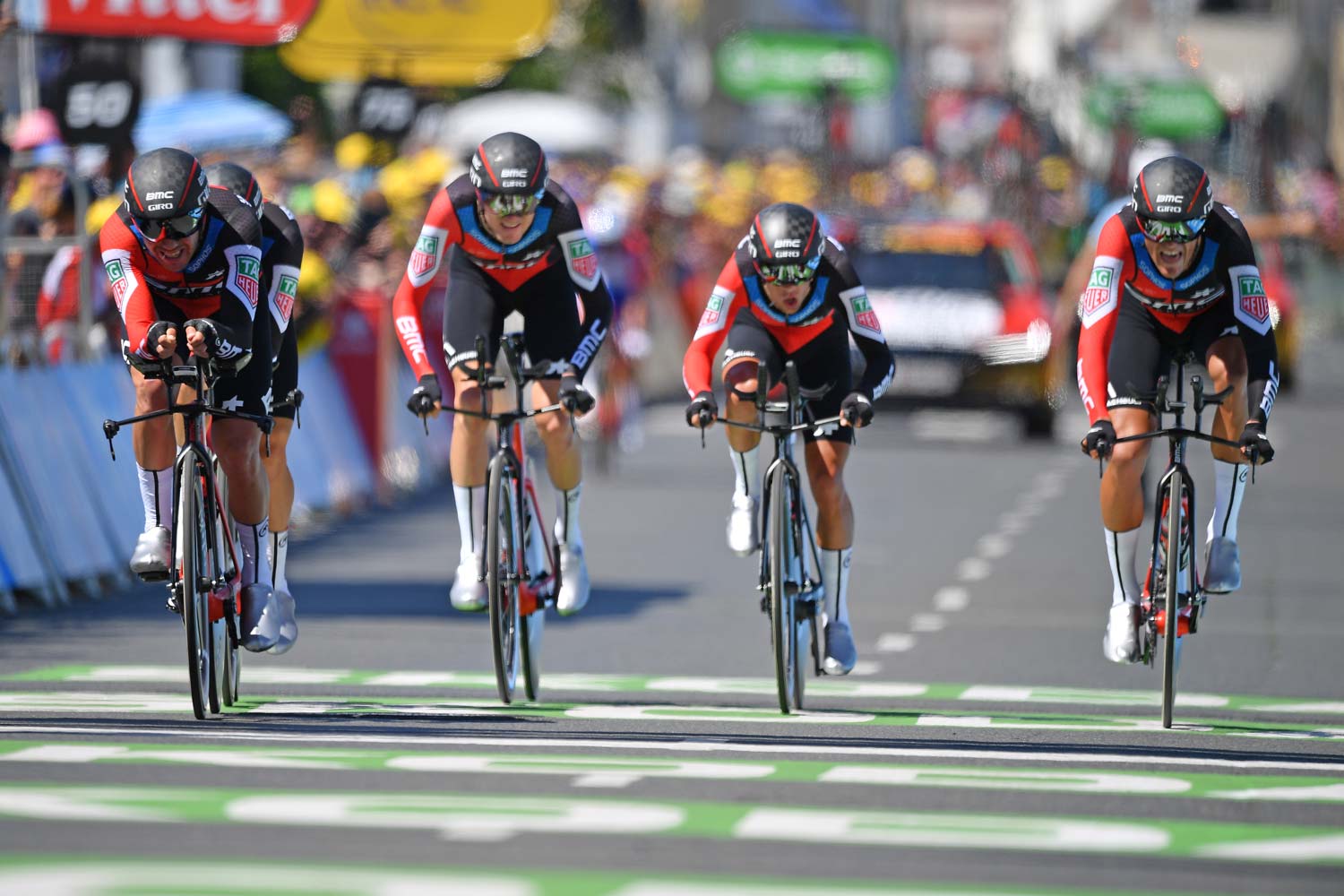 Bevin leads the BMC Racing team to the finish line in stage three.

Precedent or not, Bevin has repaid BMC for the faith it has put in him by making him part of the eight-man line-up that’s trying to delivery Porte to Paris with the yellow jersey.

“We’re in for a busy three weeks,” he said of his second start at the Tour.

“I think the first nine days are loaded for guys like myself – where we’ve got the team time trial and a couple of tricky stages through to the Roubaix day. It’s quite a lot of stress and quite a lot of work and then we shift into the second half of the race where it’s about surviving the climbs as deep into the race as we can for Richie, and to help him.”

He was part of the Cannondale-Drapac line-up last year when he started the Tour for the first time but he never really got to show himself. Injury early hindered him and he limped to Paris, finishing 114th on GC.

“I had the worst possible start to last year’s Tour, crashing six kilometres into the first stage and I got through that one,” he said, with a grin. He can laugh about it now but at the time it was an exercise in frustration. Get ready for a debut in the Tour… and crash – almost immediately. He would push on despite the pain.

“I got to the finish despite a broken bone in my foot.

“I come back this year a little more experienced and quite excited to actually be here properly and have a job to do, where I can do it, and I’m wanting to do it for three weeks.”

With some podium time and a team-mate in the yellow jersey, the Tour is already a success for BMC Racing but it’s early days for the line-up and although many are anxious about what the future holds, or if that team will even be in existence next year, Bevin is focussing on the task at hand first. After the Tour, he’ll consider what comes next in his career.

“I’m not stressed,” he says about what the future holds. Again, he grins and spells out the obvious: “We’ll get through the Tour. We’ll see what the Tour brings but for myself it’s not really relevant at this stage. I’ve been through this last year under much worse circumstances… so, it’s cycling, it’s the way that the team sponsors roll over and we just have to let that play out.”

He had ridden for a basic salary for some time but with good management and consistency in races, his market value is steadily rising. A stage win at the Tour – or even making the cut of the eight-man roster for a team like BMC Racing at the Tour – certainly helps his prospects beyond 2018.

“With eight-rider rosters it’s quite hard just to make the Tour team and to make the BMC Tour team, you’ve got to be good over a range of terrain and options so I think, as a rider in that regard, then I think just starting the Tour serves me well.

“Personally my results this year have been better through to the time trial which is something I’ve worked on. I’ve been close on a couple of WorldTour time trials and it would be nice to break that duck at some stage but, on a personal level: yeah, it’s been an improvement and that’s what you strive for as a rider.”

The duck, as he says, has been broken. He may be in the shadows of the others on the podium but he’ll be at the front of the bunch working for his team-mates (again) for the rest of the Tour.