There’s a change of colours in the peloton: burgundy has been replaced by navy blue, some logos have been added, and names changed. Team Ineos riders are now known as ‘Ineos Grenadiers’… this is a gallery of the re-branded Pinarello F12 they’ll race. 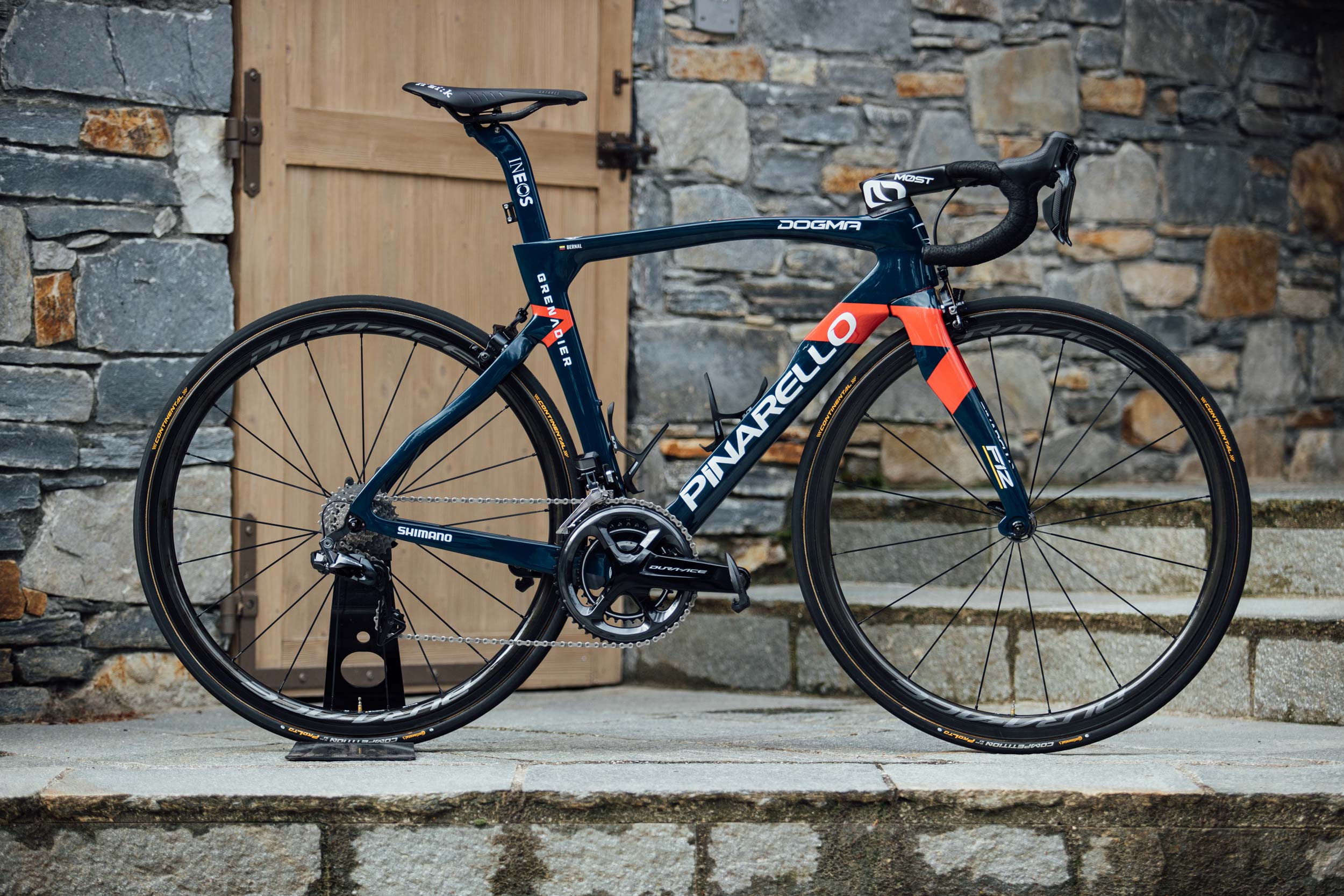 “As the reigning champion, it will be different for me this year, but I am really excited to be putting the number-one on my jersey.”

Egan Bernal is the star of the show, and the 23-year-old Colombian winner of the 2019 Tour de France was joined by others in Nice for the launch of the new colours of his team. 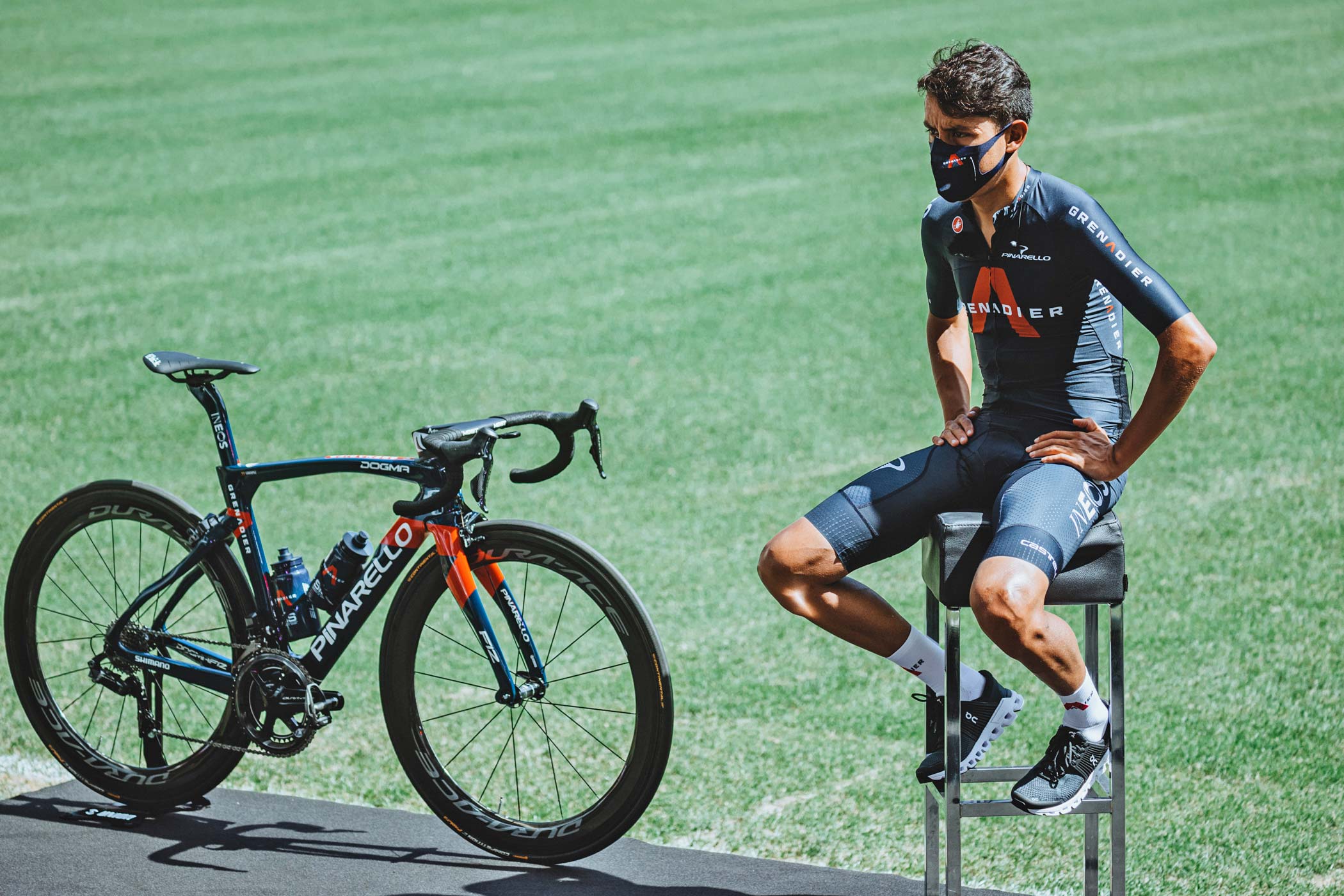 “We have a really strong team with a good combination of young riders and riders who have a lot of experience, and that is a really important thing for the Tour de France,” says Bernal in the Ineos release. “We all have the same motivation and are ready to give it our all and go full gas.” 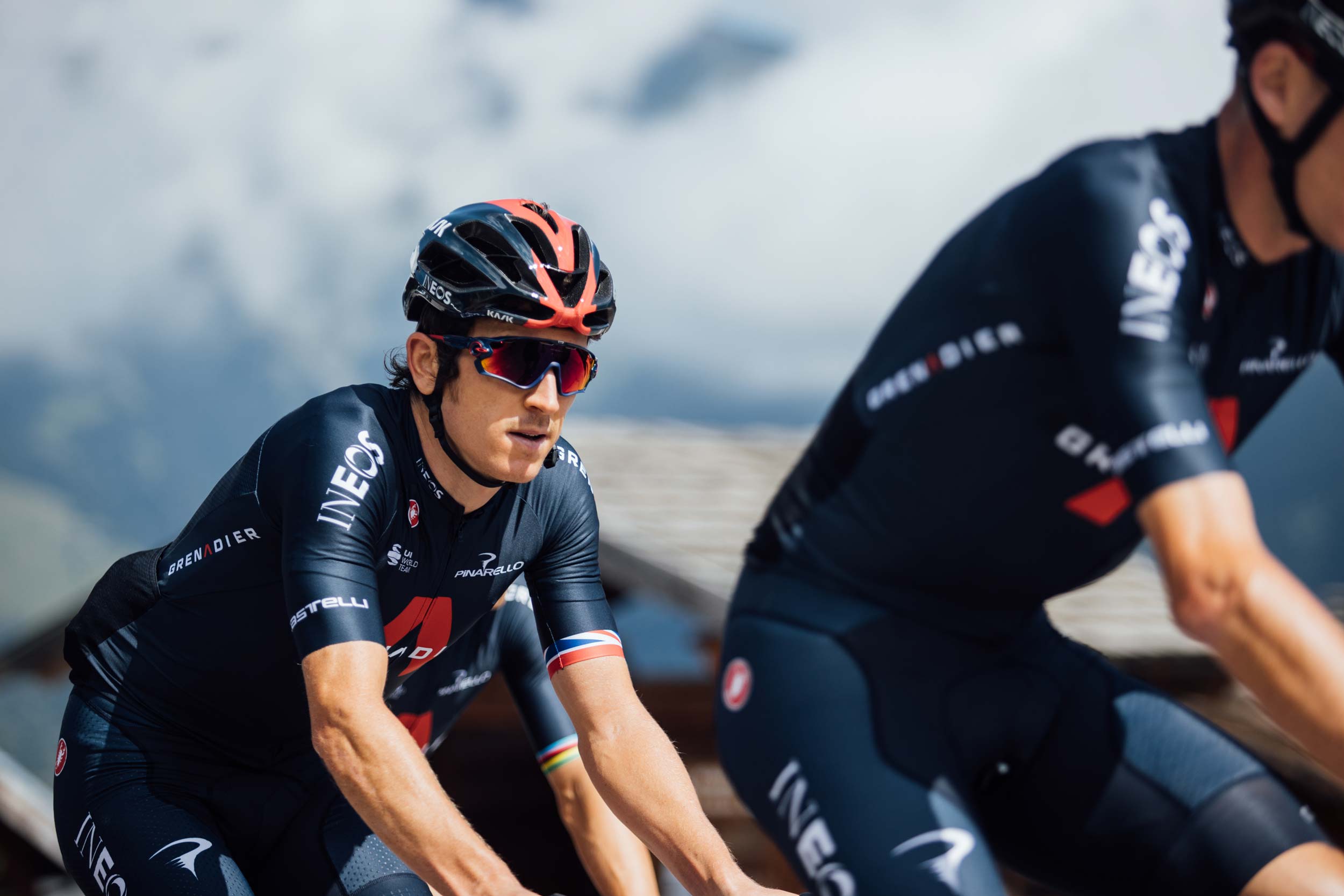 Geraint Thomas, the designated leader of the Ineos Grenadiers for the Giro d’Italia in October 2020. (Photo: Chris Auld)

Egan spoke about France and the challenge that awaits in the final days of August and most of September. Meanwhile, Geraint spoke about his memories of “the original team launch in London in 2010”, and about “looking forward to racing in the new Ineos Grenadiers colours at the Giro d’Italia”. And Chris spoke about “a partnership which feels such a natural fit with a shared vision and outlook – and, of course, “I can’t wait to lead the Ineos Grenadiers in Spain later this year”. 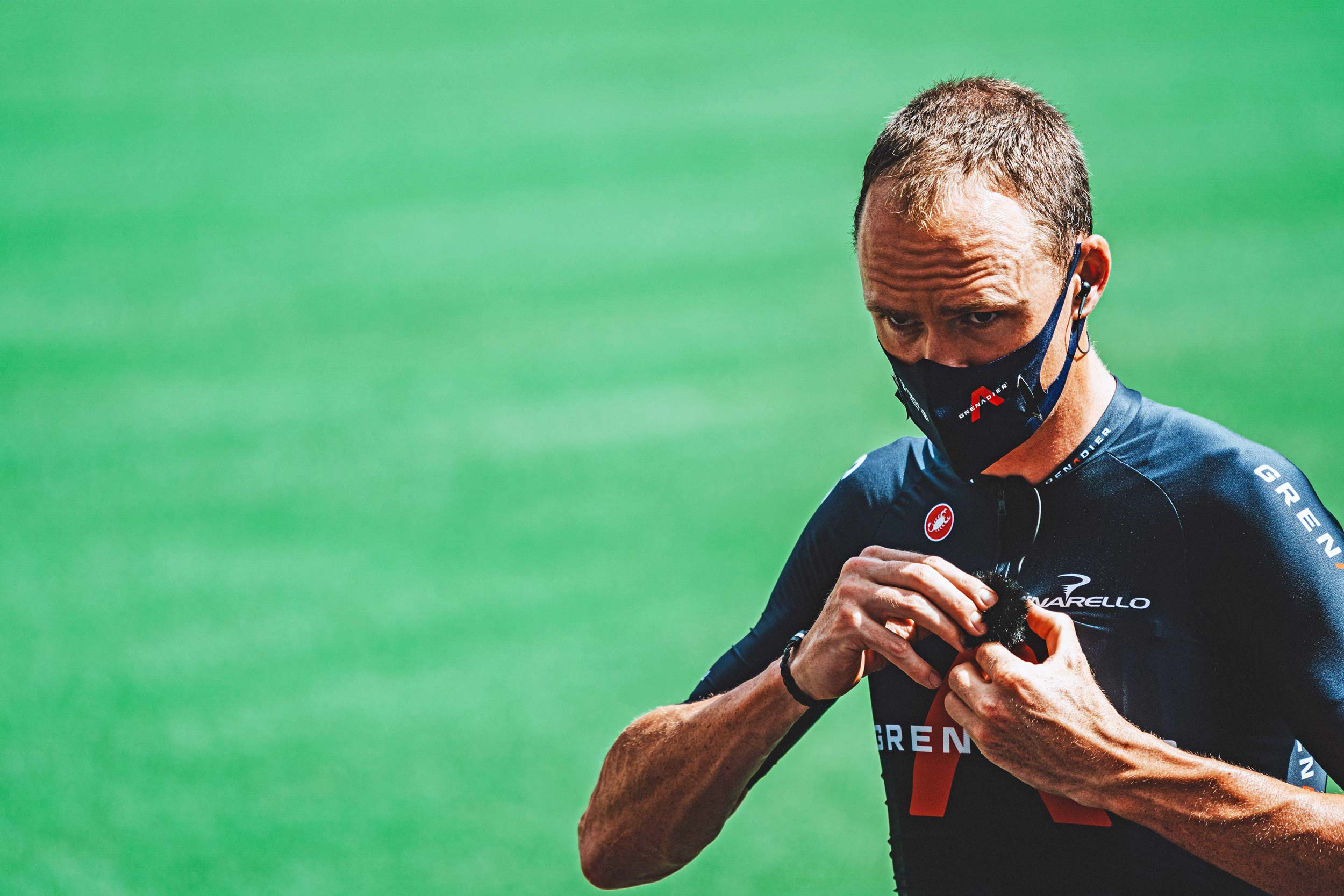 Chris Froome… the winner of 7 Grand Tours with the British team is set to contest one more, the Vuelta a España of 2020, as part of the Ineos Grenadiers. (Photo: Chris Auld)

As slick and professional as you would expect a presentation like this to be, it features all the trimmings that come with the unveiling of a new jersey, new bike colour, new team title, and a vehicle that “will pull a plough” and, according to company owner Sir Jim Ratcliffe, also “clear a mine field”.

It’s a chunky 4X4 and it is what the team is named after. 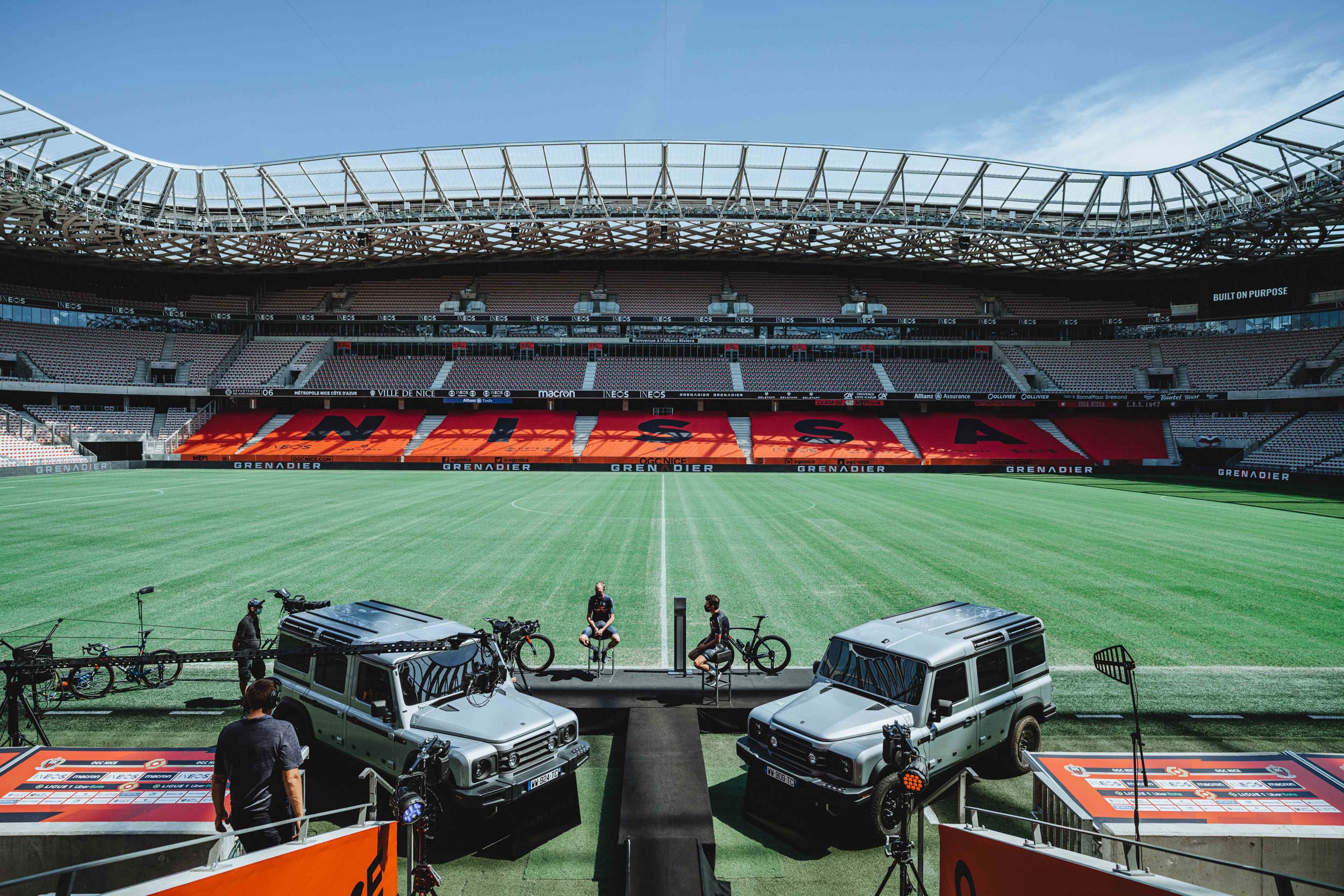 As cycling media, we’re looking more at the bike than the ugly giant vehicle that was parked on the pitch. The Pinarello F12 has been the bike of choice for Team Ineos for some time now and the burgundy has been replaced by navy blue.

Shimano remains – as it always has with this team – as the component supplier, Continental provide the tyres, and there’s a few different decals on the carbon-fibre frame. It looks different now, but we’ll be seeing a lot more of it in the coming three weeks, so there’s plenty of time to adjust to a new aesthetic.

What isn’t obvious from the launch, however, is exactly what combination of bikes will be raced at the Tour de France of 2020. The photos show the Pinarello F12, all with Shimano wheels and all with rim brakes not disc brakes. We wait to see if this team will follow the industry-driven trend and opt for a mix of braking systems.

For now, here are some photos to showcase the bike that will be raced by the defending champion of the Tour de France, and his team-mates. 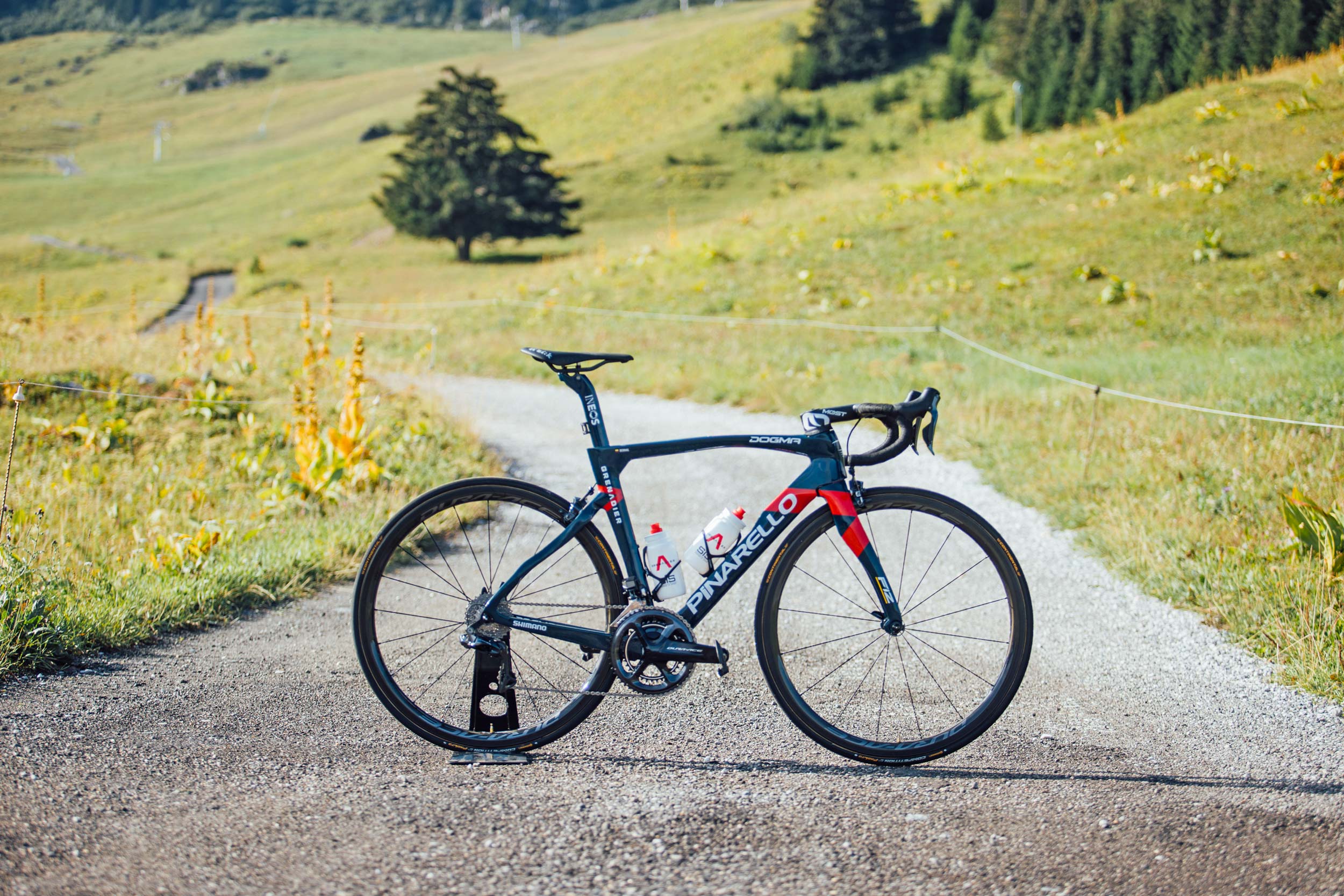 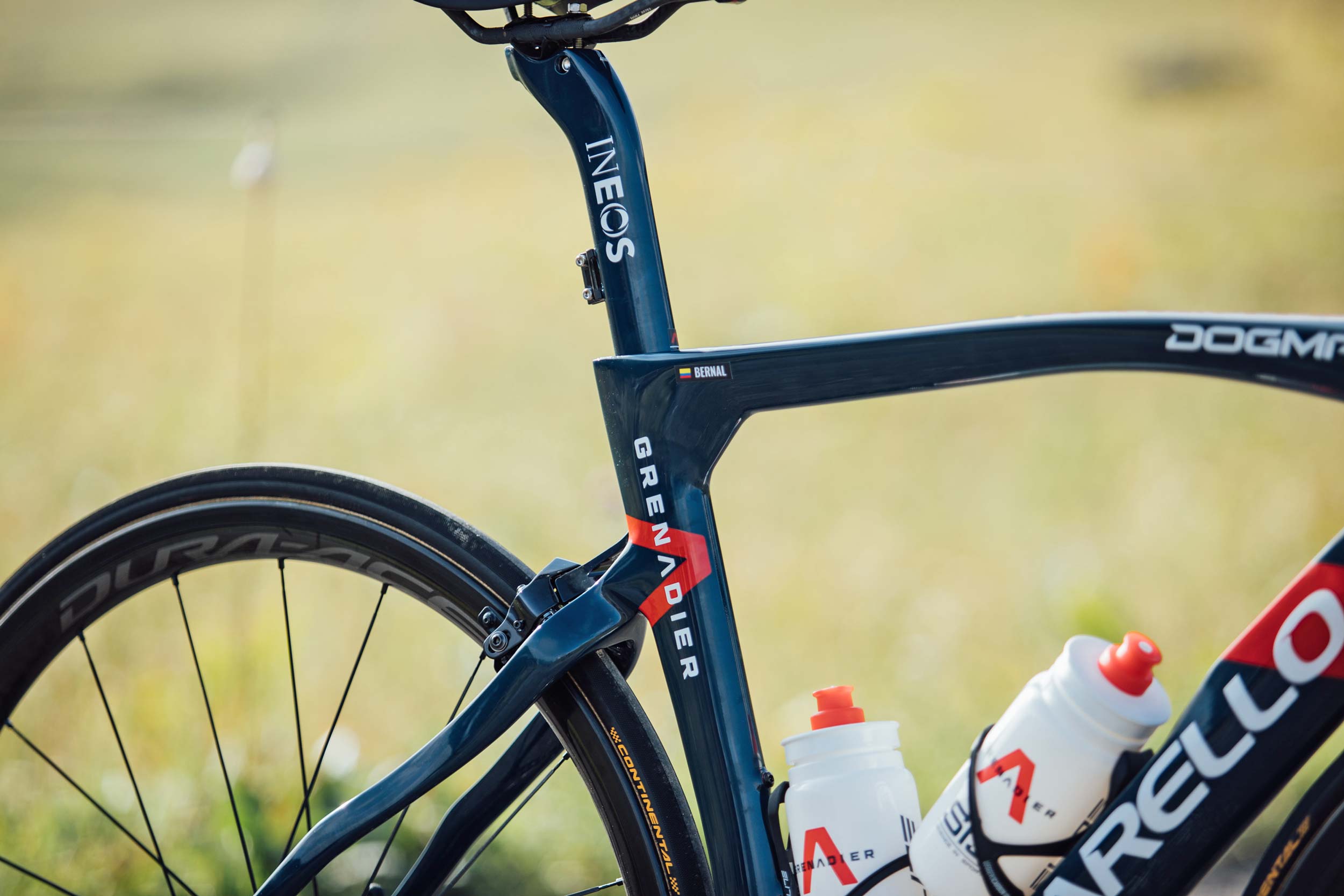 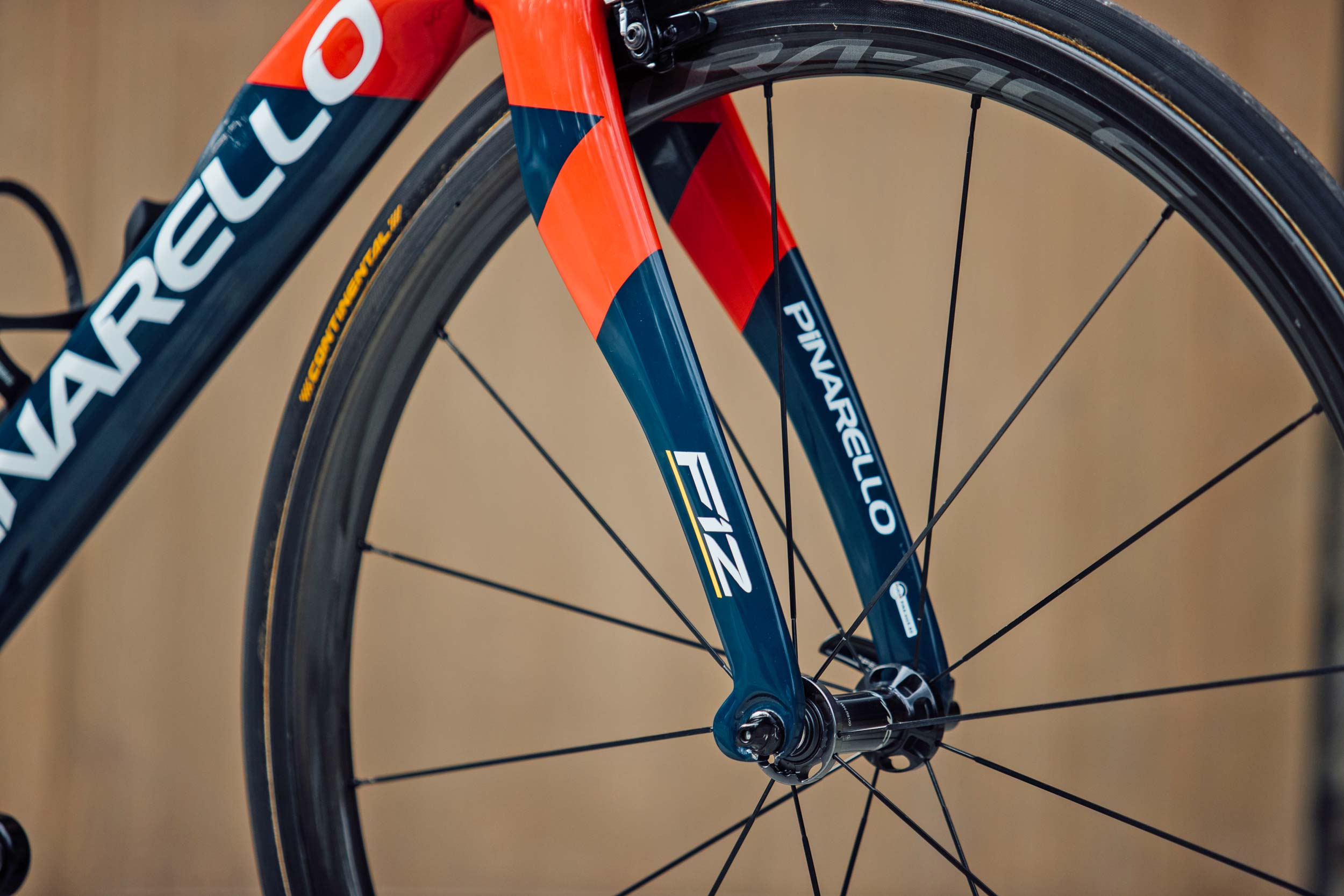 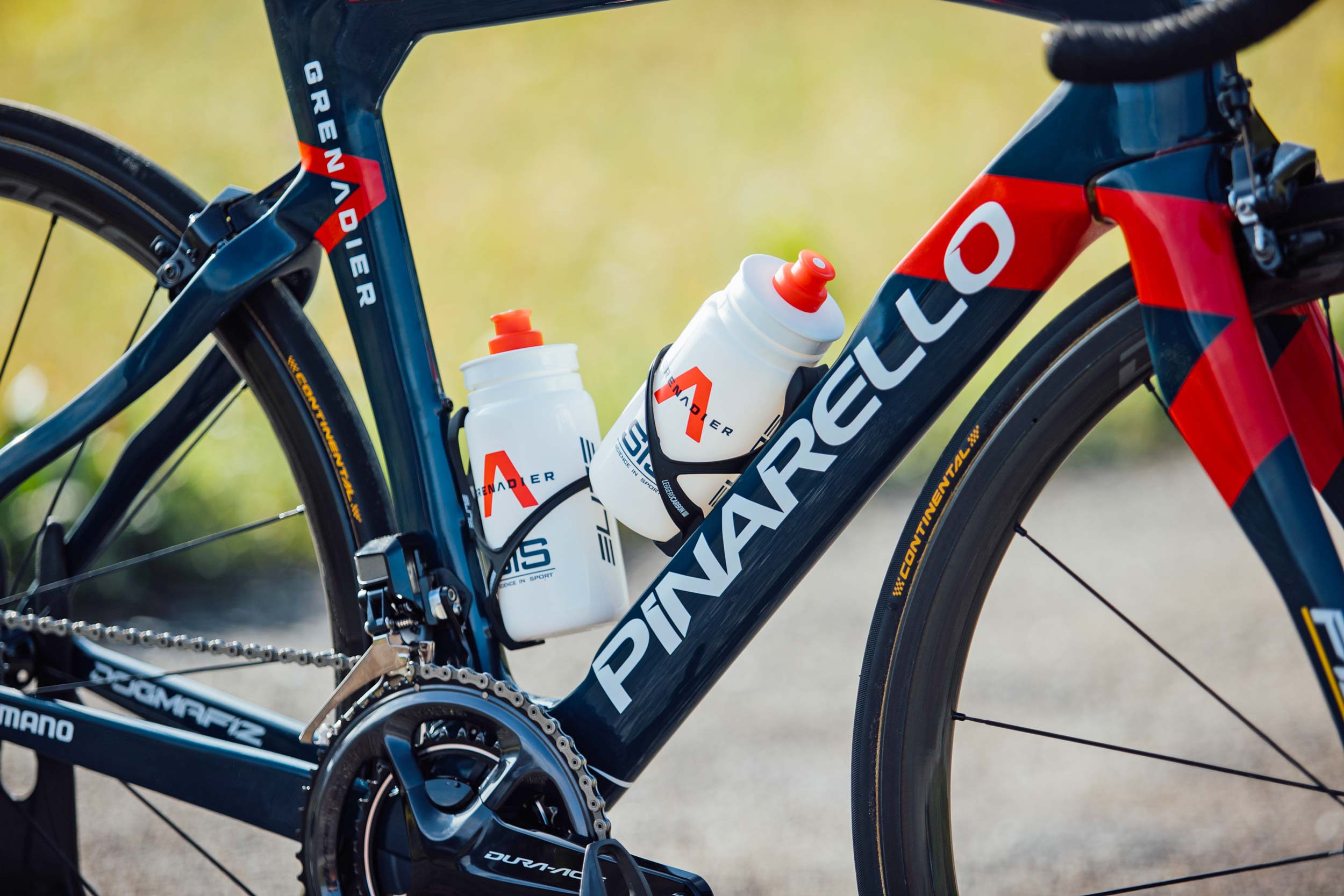 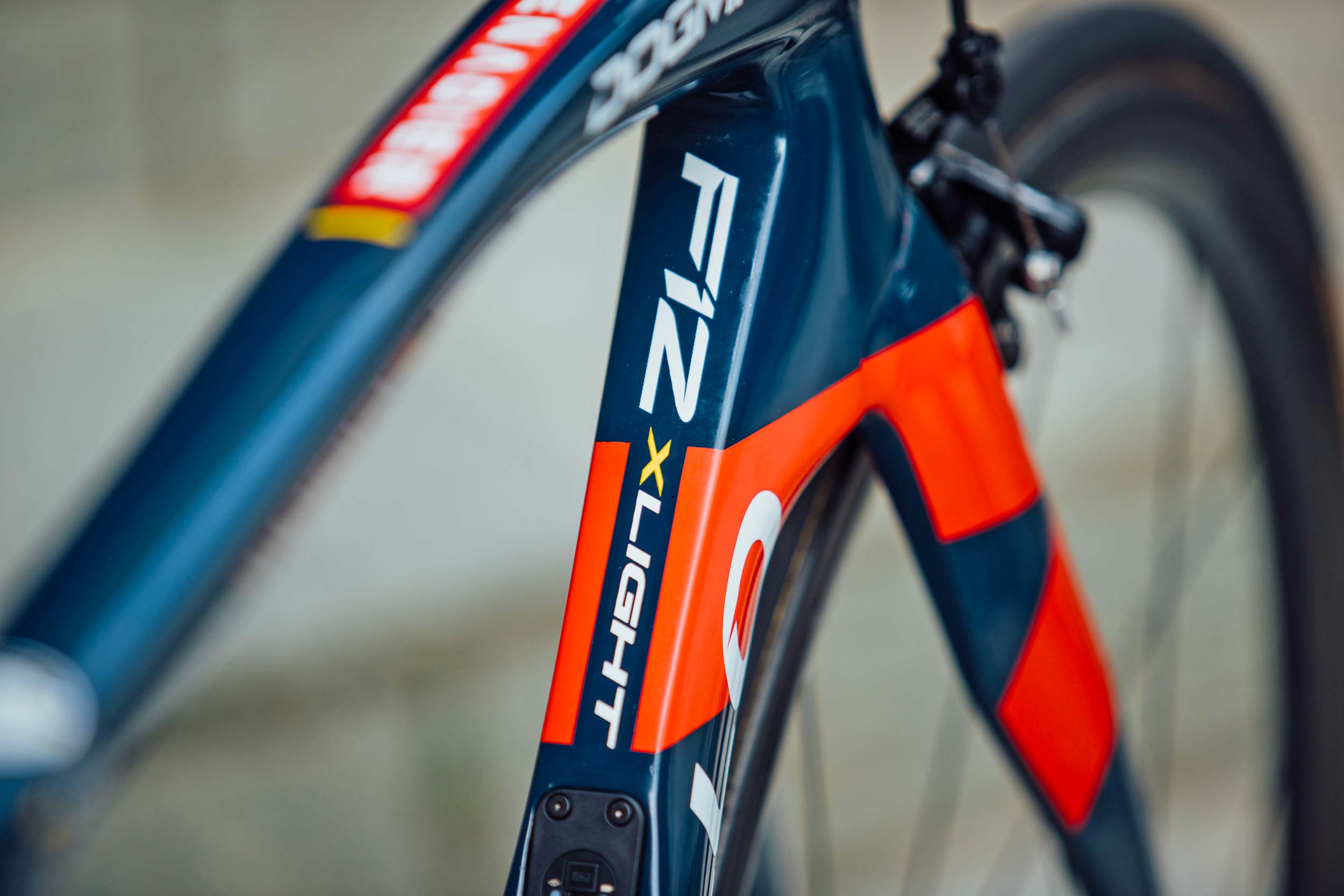 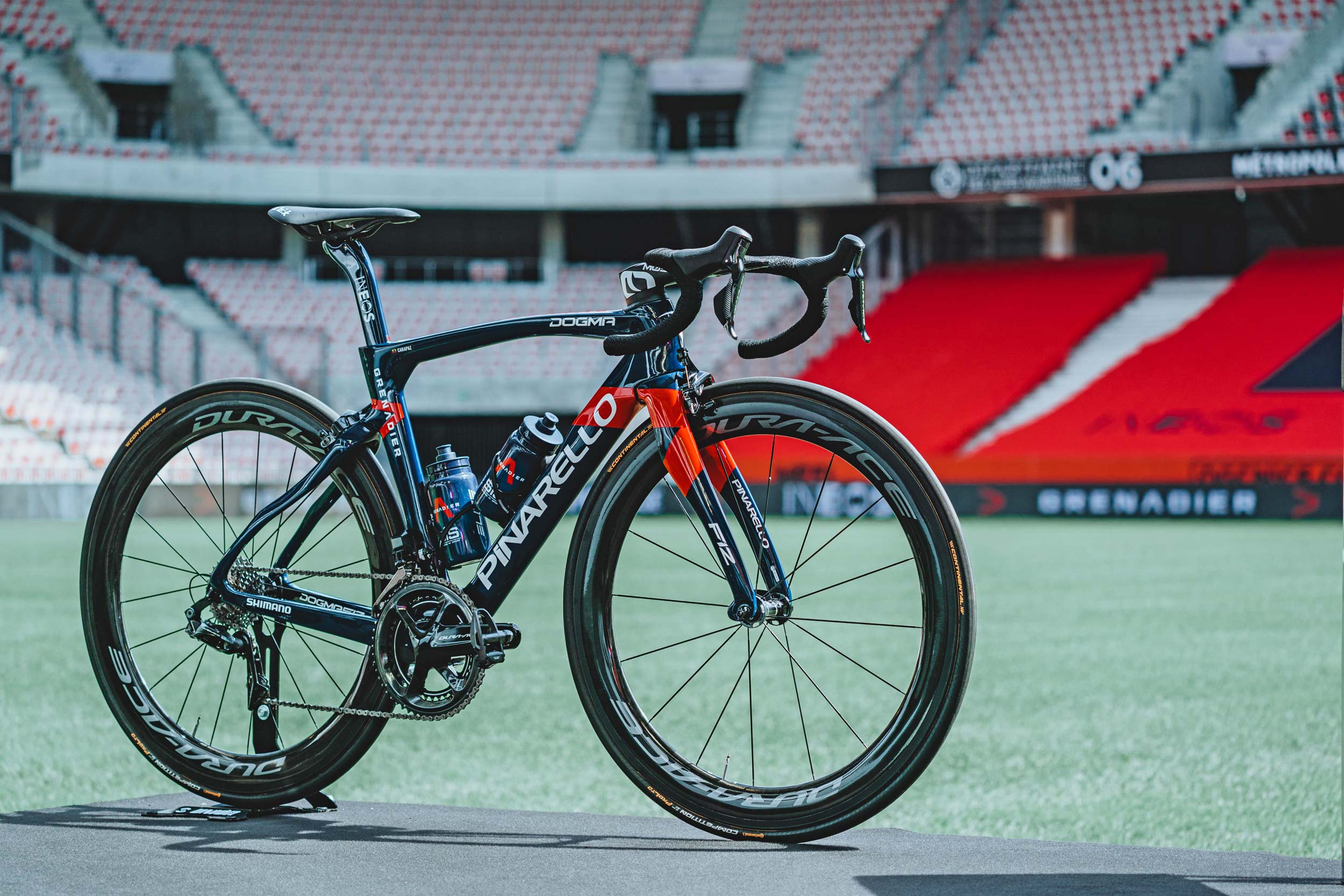