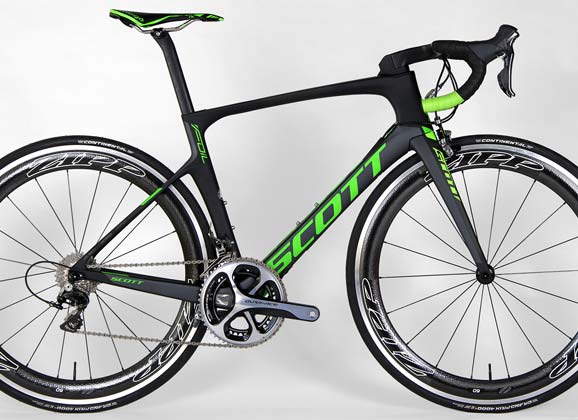 The first of the five test bikes for RIDE Cycling Review #69 is the new Scott Foil, (similar to the one you can win if you subscribe before 11 December 2015). This is a complete redesign of what had been a rather… ah, harsh Foil from the past. The ride quality is a stark contrast to how it used to be but this frame still has aero ideas (more than before) and now it has a little bit of comfort as well.

With Shimano Dura-Ace (mechanical shifting – ie. not Di2) this Scott Foil retails in Australia for $9,200.

The feedback from the test team was all positive with special mentions coming from across the board about the very cool mix of bright green and black… this is a stunning looking bike!

Click the image below to begin a slideshow of close-up photos of the Scott Foil.

“It’s Rob talking about the Scott Foil and it’s a complete redesign. I’ve spoken with some people from the company who have told me what they intended to do with the bike this year and that is, of course, ‘increase comfort, improve aerodynamics…’ and basically use all the same old words to describe what every company is trying to achieve that is, make a better bike. I think they’ve done that; they’ve achieved a fantastic bike.

“When I first rode it I forgot that it was a Foil because that name, in the past, has been associated with a very violent, very harsh ride. That is, by no means, the case with this one anymore. They have really worked on making this a comfortable bike as well as aerodynamic.

“It actually has no real resemblance to its namesake. It’s a complete reinvention.

“We have the brake underneath the bottom bracket which has been done for aerodynamics but also to make sure that the seatstays are more comfortable.

“The seatstays are very low down on the seat tube so it’s a very tight rear triangle but they are very narrow [stays] and because of the long, elongated seat post you get a little bit of give so I don’t know if the comfort is coming from the frame, or the post, or a combination of both but there’s definitely not a lot of road shock coming through the saddle.

“The handlebars are an integrated design using Syncros build ware – which is all part of the Scott family. They look fantastic – just like the rest of the bike, I might add, especially in this green. The handlebars have got a flat top and an aerodynamic concept but there’s not really space for bar tape on the top and it can get a little bit slippery. I was a bit wary the first ride that I went on, when I was out in the dark on an early morning adventure. I ended up staying on the hoods and I was comfortable there the whole time.

“This bike fits me very well. It’s a fantastic full-gas build with Dura-Ace and Zipp wheels. It’s a full race package, a very indulgent bike. I’m not sure what the price is but I know that I really enjoy my Scott from 2008. I like the brand. I love how these bikes come together. They’re very clean inside and out. There’s not much to not like about what they do with their bikes. I could talk about this one for a lot longer but I’m curious to read the test by Jack…”

“It’s Jack having a chat about the new Scott Foil which I was lucky enough to ride in some beautiful sunshine on a Friday. This bike is one which is obviously out of the aero market – which the old Foil was – [this] is the first Foil in some time. It’s a pretty terrific bike, actually. I found it more comfortable than I expected to. There was certainly a lot of bounce in the seatpost which I has been engineered in. One of the big, if I can say ‘foils’ of the last Foil, was that it was pretty uncomfy to ride and a number of non-professional cyclists were turning to other bikes in the Scott range to accommodate this. But this one’s got a really flexy seatpost which is pretty comfortable – maybe a bit too much on some occasions – and it certainly wasn’t matched with the handlebars which I found were really, really stiff and quite harsh actually.

“This is not a bad thing, it’s useful if you want to go fast especially if you’re in a sprint or want to go up a hill quickly or something. They were really stiff and good to handle. The drops aren’t too deep either which is nice so you can find a nice position. The handlebars were quite wide though. I haven’t measured them yet but I would say they’d possibly be up to 44 [centimetres] which is a little bit wider than I’d expect on a stock handlebar from a bike in this size. Obviously most people on it are going to be about my height and would probably have a similar shoulder width.

“Obviously the groupset’s really nice – it’s Dura-Ace mechanical. The wheels are Zipp 60s which are sort of like the cheap version of Zipps. They don’t have a carbon braking service – it’s aluminium. Obviously it’s a clincher wheel. They’re sort of, I guess in keeping with the aerodynamic market. I’ve never really been thrilled with the style of wheel like this but they do their job which is to keep aero and fast. The reason I don’t really like them so much is because I think that if you’re going to get an alloy rim, you might as well get a proper alloy rim rather than sort of a carbon-alloy hybrid. The full carbon clinchers are good enough now that you can use them all year round.

“It’s a terrific looking bike. I kept looking down and seeing the bright green and I have some shoes as well which are the same colour so it’s a pretty great match. So, all in all, it’s a bike that I really enjoyed riding. I look forward to seeing what the review says about it. It’ll be interesting to see how it goes hard up long climbs and also over so faster bunch rides. Yeah so I look forward to reading about that.”