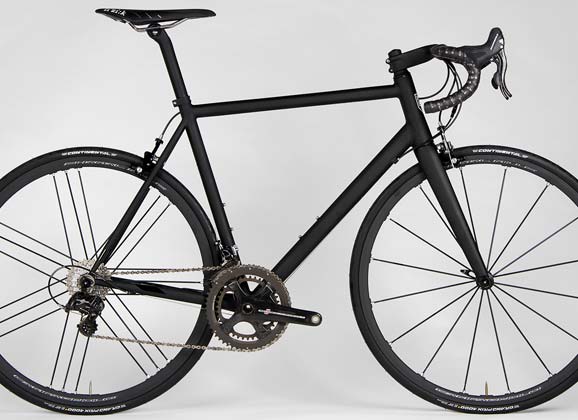 Repete is from the Czech Republic and it recently won the ‘Best Road Bike’ prize at the North American Hand Built Bicycle Show. One glance and you’ll nod in approval: this is an attractive bike even if the black can’t get much blacker.

Super Record recently won the Vuelta a España (but while attached to the Specialized frames of Fabio Aru’s Astana team)… and, again, one glance and you’ll nod in approval – there’s a reason why this component maker has a cult following. This is lovely stuff to look at and very nice to have on a bike.

Testing duties went to Craig Klemment who was able to compare this steel against his own steel frame… and he liked what he rode.

Click the image below to begin a slideshow of close-up photos of the Repete Reborn.

“I’ve just ridden the Repete which is a custom steel frame handmade in the Czech Republic. I don’t really know much about this bike except that it won the North American Handbuilt Bike Show award for best bike. But I don’t know what the criteria of that is so it’s hard to really say.

“What I do know is that the bike looks fabulous but also it rides equally as well. It’s a really really smooth bike. Obviously, this one’s Campagnolo Record put on it with Shamal wheels so as far as smoothness and reliability is concerned, you can’t really go past those two.

“Every pedal stroke’s a joy when riding Campagnolo, I think it’s got to do with the chain. They make beautiful stuff there – I was lucky enough to see it first hand so perhaps there’s a little bit of extra knowledge that’s going into my affectation for it. It does really feel different to the other two [SRAM and Shimano].

“The frame itself is this matte black with, I guess you’d call it embossed highlights on it. It looks really really nice. It’s a head-turned without being too out there so it’s something that most people would agree with. It’s super super dark but that could mean you don’t have to clean it very often.

“I found the bike to be really planted. I think the frame and fork weighs over two kilos which – in this day and age – is a mighty bicycle. But all together it sort of still under 8 [kilograms] which means that it’s got this great feeling of plantedness on the road and feels as if you are really connected with the tarmac – the black tarmac seeps up through the bike and it becomes one with you (if you want to be poetic).

“I really enjoyed the turning of the bike. It’s got a really consistent circle so whether I was late on the corner or early or nailed it, it always felt very assured and I got a lot of confidence from that.”

“The wheels have got a super quiet freehub which is interesting because the last few wheels of the test bikes I’ve had have been pretty noisy. It’s nice to have that ‘sweet spot’ when you’re freewheeling at speed with a nice tailwind and no sound at all except for the tyres on the road and I think that’s the most basic enjoyment for a lot of us on the bike – just to feel yourself rolling without having to worry about anything else and this bike really helps do that.

“It’s really really comfortable too. I hit a few bumps that I really noticed on some of the other bikes I’ve done ‘round tables’ on but this one just glides straight over them. It’s only got 23mm tyres on too so if you put 25mm on it would be even plusher to ride.

“The Repete would be a pleasure to own for anybody. It’s a piece of history – well it looks like a piece of history anyway. It’s a modern classic which kind of amalgamates all scenes nicely. I look forward to reading the review of it and I hoe there’s other bikes like this we get to test in the future.”

“It’s Rob having a chat about the Repete Reborn. The first thing I’ll say is: ‘Hello Campag, my old friend. It’s good to work with you again.’ It’s just such a familiar hood – well, not so much the hood itself because I’m old-school Record… the only Campagnolo bike I’ve got is over 10 years old and I don’t ride it very often. But as soon as I jumped on this – as soon felt that it was a Campag hood, and you notice the difference immediately in the hand – it was natural just to pull the thumb in and click down the cluster.

“It’s a natural reaction: tick, tick, tick – thanks very much. And off I went down the driveway.

“This bike is too big for me so let’s be clear, I didn’t get a proper riding feel for it although I did take it across a bit of concrete road where there are some nasty seams and you do feel that tuk, tuk, tuk – it is a bit of a train track with the steel frame compared to carbon bike.

“We’ve talked a lot in this issue about different methods of lay-up of carbon and how that’s being perfected… you don’t have that opportunity with steel. You can toy with the butting here and there and I guess there are different techniques of building but you don’t have that ability to adjust the ride quality like you do with carbon. Still, I’m always a big fans of steel and I’m never going to go back from that because it does give you that raw cycling feeling.

“You probably get the impression that I’m a bit old-school; I complain about disc brakes, I praise rim brakes… but in the past I’ve had a go at Campag for their single-pivot rear caliper; I never understood that and I still don’t. If you’re going to do rim brakes at least make them work – don’t deliberately under-engineer them, that’s just a concept that’s beyond me.

“This Campag Super Record looks fantastic; it’s the four-prong spider that looks oversized. The cranks are like Campag always is with its cranks – that is to say, they look exquisite!

“The whole bike, I think, is very stealth and I’d like to see it with a bit more colour, maybe a steel blue or something like that. This was [a bike] to showcase the Super Record groupset and it’s great to be riding it again. The shifting quality is crisp, even on a bike that’s too big for me I could appreciate it. And I’m reminded that I should update my Campagnolo collection and get another bike. If I did do that, it would be a steel bike and maybe a Repete in my size… who knows?”