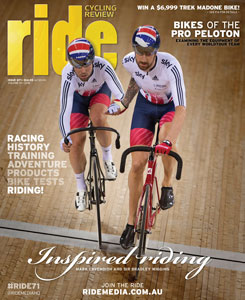 The second test bike in RIDE #71 is from Canyon, a new brand for the Australian market. It has an office in Melbourne but this German company will continue to do as it’s always done and ship bikes direct to customers – yes, the rider not the bike shop – from it’s headquarters in Koblenz, Germany.

The review bike was an ‘Ultimate CF SLX 9.0 Aero’: in other words, a Shimano Dura-Ace Di2 equipped bike with an elegant carbon-fibre frame. Including shipping costs, it will set an Australian customer back $10,198.

There’s a lot to like about this bike that comes with Zipp 303 wheels, Continental GP 4000 tyres, and Canyon’s integrated handlebar/stem.

It’s ready to race right out of the box. And the ride quality is impressive.

“We realise now that stiffness does not make the best bike in the world,” [Canyon engineer] Sebastian Hofer explained. But the CF SLX is not built as a ‘comfort’ bike: it’s an amalgam created for various riding situations. There is comfort – and the frame deserves credit for a lot of it, but a big influence is the seatpost. The 27.2mm post is matched to a proprietary fastening system (with one bolt down near the seatstays, negating the need for a clamp) that is neat and effective. The compliance of the post contributes to such a plush ride quality.

Click the photo below to begin the slideshow of 38 close-up photos of the Canyon.[ReflexGallery id=’255′]

To listen to Jack Lynch’s comments after his first ride, click the SoundCloud file – and/or read the transcript below…

“[This bike] surprised me a lot more than I thought it was going to – well I guess that’s what a surprise is; when you don’t expect something. But the Canyon’s something that everyone’s been talking up for ages and I bought it for a little while but then after a while I like, ‘I’m pretty over this,’ and I just wanted to ride one so I could form my own opinion and stop regurgitating what other people are saying or telling second hand accounts and this is my first-hand account here.

“I only rode it for 15-20 minutes but I found a couple of things – it was different than what I expected.

“It had a lot more bounce to it, a lot more plushness in the ride particularly through the saddle.

“I could tell, when I was building it, that it was going to be something more comfortable than some other bikes but not to [this] level.

“I said ‘bounce’ but I really mean ‘comfort’.

“It looks like the seatpost would be a bit springy and you do feel a bit of movement but nothing to put you off the bike. Similarly in the front – the handlebars – they’re a beautiful shape and a really nice one-piece that integrates the Di2 [junction box] very nicely under the stem and the position they put you in is first-class. They kind of move in motion with the seatpost and that made for a really nice ride that you could go on all day.

“But at the same time it’s super quick and I think that’s what surprised me about it.

“Yes, it’s got magnificent wheels – the Zipp 303s are best-in-class and it’s a super light bike but it actually felt lighter than it.

“I can’t remember what it weighed in at but I’d say, with pedals… around the 6.5 kilo mark and it felt probably 500 grams less than that and that’s a real credit to the bike. What can I put that down to? It’s pretty hard to say.

“It’s a German brand – which everyone always goes on about saying it’s going to be precise and all that sort of thing – but, building it, I didn’t really find that it had anything particularly special about the carbon, but that’s only in parts that I can see.

“Obviously the areas that we can’t see is what really matters to the make-up of the bike and they’ve nailed it here.

“I was a little bit sceptical about a couple of angles and lengths and certain things to do with this bike but on the road I didn’t think about it for one second.

“It cornered and it climbed and it sprinted like as well as any other bike in this category.

“You see guys like [Nairo] Quintana riding this up the mountains but other Canyon sponsored athletes like Alexander Kristoff will take the Aeroad on most scenarios including cobbles and things, so I can only imagine what it felt like on those sort of roads.

“I know on this bike, if it were a bit rougher you’d be pretty pleased that you were on it because it really does make you want to ride it all day long.

“As for the colour scheme, I think it’s nice to see another bike come out that’s not black. They don’t reach too far as far – as going overboard with graphics – but it’s one that’s going to be quite pleasing to most eyes. It’s inoffensive but not boring which is quite a nice touch by the designers at Canyon.

“I look forward to reading what Rob has to say about this bike. I came into it thinking it might just be another bike but the Canyon might be the real deal.” 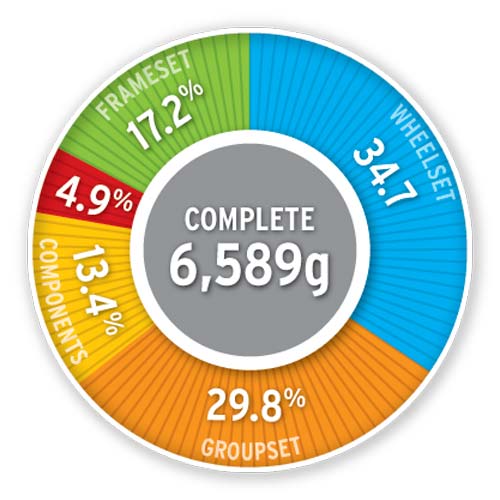