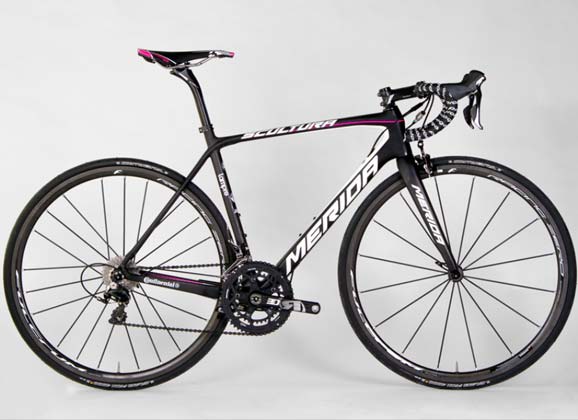 The third test bike in RIDE 69 is from Merida, the largest bike manufacturer in the world. The Scultura has been relaunched in 2015 and it is a phenomenally light bike that is ridden by the Lampre-Merida team.

Here is the online gallery as well as comments from quick rides by the editorial team at RIDE Media HQ.

“I’ve just ridden the Merida Scultura for the first time. It was my usual weekend ride which is obviously a little bit longer than our standard ‘Round Table’ so take that either way you want.

“Obviously, it’s a super light bike. I was lucky enough to head out to some hills and give it a good crack there. What I did notice about it was that hills are still hard, regardless of what sort of bike you’re on. But what this one does, is it really enables you to accelerate quickly and get on top of your gears. I think that’s because of the 52/36 front chainring. It’s a pretty smart gear-set for this, because obviously the person who owns a bike like this is going to want to do a lot of hill climbing and you don’t lose so much in missing the 53/39 but you do kind of gain that ‘spinability’ and I’ve just made up a word I think… what I mean by that is that you can kind of put in a couple of quick pedal strokes and get over that barrel which means that when the road does flatten a fraction you can sort of accelerate a bit easier than some other bikes.

“This one’s got the rear brake under the bottom bracket which, as we know now, is not for aero gains, it’s actually for compliance – to make the bike a little bit more comfortable.

“I found this bike to be pretty ‘rattly’ but it’s a performance bike so I guess those that ride it are not going to be out to ride ‘in the road’, they’re going to be riding ‘on the road’ and the penalty you pay for that is a bit of bouncing around.

Another thing is that is has a 27.2mm seatpost which generally has a little bit more ‘bendability’ and can move back and forward on its own flex a little.

“This bike should be my size but I felt like I was a little bit stretched out and there’s not as much post showing as I’d often have on other bikes, so perhaps a size smaller would have been good and that would have really exploited that flex in the 27.2 seatpost.

“The brakes, as a whole, work really well. It’s a bit of a funny one – we were sent some pads from Swissstop with the Fulcrums instead of using the Fulcrum pads. It was a request from Merida and they’re actually pretty fun. They make this like ‘laser’ noise when you put them on, and they stop fine. The first ride on carbon pads is often a little bit sketchy until they kind of wear-in but it was okay. Hopefully it rains a little bit soon so I can ride them, and test them and let you know how they go there but I think they should be fine. Swissstop make a great pad – the black ones. They used to be called the ‘black prince’, I don’t know what these ones are actually called, I’d have to look that up. [They are the Swissstop Flash Evo Black Prince pads.]

“The head tube was a bit tall. It was 14 centimetres – I measured it just before going for my ride. Generally, in my size, that’s a bit more relaxed geometry – or somewhere between relaxed and race – which probably suits the majority of people. Personally, I’d like to go down a little bit more. By the end of my four hours – or however long I was out there for – I got a little bit of a sore should and top of the arms which was weird. Whether it’s the bike or something else I’ve done throughout the week, who knows?

“I also got a chance to got on some flat bits and it does hold speed very well. The Fulcrum Racing Zero Carbon wheels are sick. Like all Fulcrum wheels they’ve got that thick bladed spoke which tends to roll quite nicely. Bladed spokes do make a difference compared to round spokes. I know ‘aero’ is often questioned as a bit of a marketing thing but I really feel that sometimes I’m pedalling in sand when I’m on round spokes but these ones are nice. Yeah, there’s a small weight penalty but when you’re up and spinning it doesn’t really matter.

“Everything from FSA is always very cool. Personally, I’m not a big fan of the graphics on them but I don’t see that when I’m riding and these handlebars are my favourite going around. A carbon stem is a carbon stem and a seatpost is a seatpost. Although it’s probably a little bit set-back – the seatpost. It’s a 25mm seatback which was actually stocked on another bike we had with the same seatpost. For me, I’m a zero setback guy or maybe 10mm for some brands but 25 is a long way back, particularly for a small bike.

“Anyways, up the hills it was quick, down the hills it was great. I didn’t have to brake at all, which was really good on the bends where I’d often feel a bit sketchy. I think that’s got to do with the 25mm tyres too and that’s a great trend that’s come in over the last 12 months or so. And everyone’s embracing it very quickly, thanks largely to the professional riders who are riding 25mm tyres instead of 23s. Pump them to a little bit less and they feel really really nice.

“It’s Rob talking about the Scultura, the new one with the superlight frame, from Merida. It’s a bike that looks great. It’s nice to see the pink, white and black instead of the green that they’d been running for the Lampre-Merida team bike for the last few years.

“There’s a lot to like about this bike. I’m going to try and summarise it quickly because I could talk about it for a while.

“The first thing I will reference is that it’s got the bottom bracket mounted Dura-Ace brake caliper and that, I’ve been told by Merida, is less to do with aerodynamics and more to do with hoping to allow the chainstays to be a little bit more comfortable – to give a bit more flex without the brake bridge. You notice it when you’re riding.

“It’s a perfect fit for me. I love the handlebars; these are FSAs and they are about 40cm on top and 42 when you’re down in the drops, and the bend is perfect! I found myself comfortable on the tops most of the time, I didn’t really go to the hoods very often – I was either on the top, or in the drops. And the top is a bit elongated, a little ovalised and it held my hands really well and it was very comfortable.

“I found myself staring forward on this bike more than I do on a lot of test bikes; I just didn’t really feel the need to look down to understand where anything was.

“The benefit of the brake going down to the bottom bracket is that you’re not getting any cable rub on your inner-thigh which I tend to do on quite a lot of bikes when the caliper cable comes out of the top tube, or is routed along the top tube externally.

“This is a really comfortable ride. [The bike] has got some Fulcrum Racing Zero carbon rims and we’ve got some Swissstop brake pads with it and the sound that comes from the front brake – because you hear that more than the low rear brake caliper – is this really neat little, like a toy lazer: ‘Zooooew! Zeeuw!’ It’s pretty cool, that’s probably because it was the first-time riding this test bike after Jack built it.

“I think it’s a sensational looking bike. I think Merida has a great place in the market because it hasn’t got that real big name reputation – even though it is probably the biggest bike manufacturer in the world – the price point means that you’re not paying for a huge amount of marketing and you’re probably getting a lot more bike for your buck with this one.

“I highly recommend anyone having a look at a new bike to look at this; it’s extremely light. It rides light – sometimes I was climbing with my hands in the drops and there was a bit of back wheel skip but only because it’s so light and it’s a very tight rear end. It’s something to consider but you can adjust yourself accordingly or climb in the saddle…

“What else can I say about it? There’s a lot to like about [this bike]. You notice the lightness.

“The one thing I would change is try to route the cables that are for the mechanical shifting a little bit differently. Obviously if you have Di2, you’re not going to have that concern but these do flare out a lot and, at times when you’re turning, it sort of bulges and you can feel it on some parts of your hands if you’re on top. It’s hard to explain but I’ll try to illustrate it with images in the magazine.