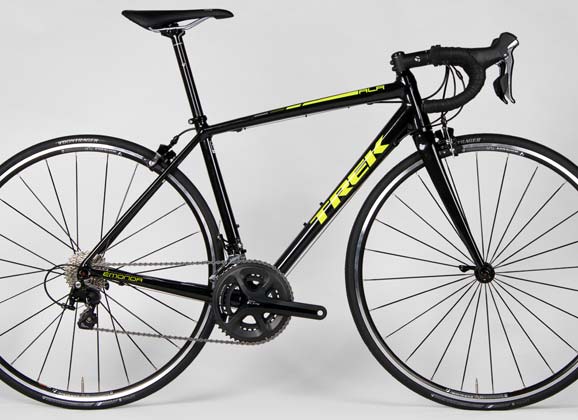 The fifth of the five bikes on test in RIDE Cycling Review #69 is the Trek Emonda ALR – an aluminium frame iteration of the brand’s lightweight, high-end beauty.

This is well down the pricing spectrum for bikes that are usually reviewed in RIDE and, in 2015, it retails in Australia for $2,199.

Spec’ed with Shimano 105, it is a relatively rudimentary package but that need not translate to anything negative.

This is a quality bike that’s ideal for those who are new to cycling.

It offers a taste of good shifting (although not quite as crisp as Ultegra or Dura-Ace) and puts the rider in a good position that will suit hours of riding. With minimal investment in upgrades, this could be a bike that’s raced at club level without any concerns. It is an ideal training bike and the consensus from the test team is that it’s great value for money.

Click the image below to begin a slideshow of 25 images of the Trek Emonda ALR.

“It’s Rob talking about the Trek Emonda ALR, an aluminium frame with Shimano 105. This is my third bike today and the third shifting system and each is intuitive for their own reasons. I started with SRAM which was a disc brake hydraulic with a big wad of a lever at the top – very comfortable. Then I went on to good ol’ Super Record which is the best ergonomic shape in the business, I reckon: you’re hand sits in the hood very well. But then I got on the 105 mechanical and it’s also a really comfortable hood and a very natural shifting mechanism.

“I’m used to Shimano – I ride a Di2 myself but it doesn’t take me any time to readapt to the full push of the paddle [with a mechanical shift] instead of just a push of a button to change gears.

“As you’d expect, the shifting is not quite as crisp as it is with Dura-Ace and Ultegra but it’s still a pretty reliable thud down the cluster and you get the gear you want with no bother. You’ve got to give a lot of credit to a groupset of this price point.

“The bike, I think Jack summed it as being something that a new set of wheels – a more luxurious set of wheels – is going to give a lot of benefit to. I echo that sentiment. These are fairly rudimentary wheels on, to be honest, a rudimentary frame that rides really nicely.

“There is a lot of post showing and you can feel, on the road, that it does have some compliance; it’s not suspension by any stretch but you can feel that it’s soaking up a bit of shock. When I went over some speed bumps which were brick on top and [at] the front end you can basically feel the mortar in between the bricks. You feel a lot of the bumps on the front of this bike. That’s just what you’d expect from an aluminium frame.

“I have a lot to say about a lot of the bikes I ride; this one though, I think the price is the main selling point. There are a lot of other good things about it, you could buy it and comfortably build it up as your training bike or your commuting bike and by the time you got on your race bike you’d feel like superman because this one is a little heavier than the others as well.”