The fifth (and final) bike test in #RIDE71 is from Cannondale. The SuperSix Evo Hi-Mod was reviewed by Nick Squillari who owns a CAAD10 and was keen to see how the lightweight carbon-fibre frame compared with his aluminium one.

The complete bike, built with Shimano Dura-Ace, weighs in at just 6,202g.

In Australia, the recommended retail price is $9,799.

“That Cannondale sells bikes off their geometry alone should come as a surprise to none,” writes Squillari. “And while it’s one thing to claim stiffness in a bike, it’s another to deliver that in a manner that has the front and rear in such unison as this latest EVO. Coupled with a full Shimano Dura-Ace 9000 groupset – barring, of course, the devastatingly light, stiff and pretty SiSl2 Cannondale cranks – it’s a package that will still see the EVO still as the benchmark many others are measured by.”

To see the complete Cannondale review, turn to p.208 of #RIDE71.

Click the photo below to begin the slideshow of 35 close-up images.

Jack Lynch on the Cannondale

“It’s actually really exceeded my expectations. I’ve been lucky enough to ride this bike before and I seemed to have forgotten how nice it is and I think it comes down to a few factors.

“It feels better out of the saddle than any other bike out there, you just feel totally balance and in control the whole time which is something that’s really handy when you’re going up hills or even launching into a sprint. I know it’s not the most aero bike out there per se, so the numbers (cough) tell us but it certainly feels like one of the best.

“It accelerates really nicely… what could it be down to? I think a big part of it is the BB30 system – or the PF30 on this occasion – and the Hollowgram cranks that Cannondale has been pushing for a long time. They’ve really stuck to their guns on this one and it’s paying off because I have to say that stiffness in those cranks and the weightlessness of them actually does make a difference on the road.

“It’s also got a new seatpost – a 25.4mm seatpost – which is slimmer than the previous SuperSix Evo Hi-Mod that had a standard 27.2 but the engineers made it a little bit smaller to make it a bit plusher. It’s hard to say on the road whether that’s making a huge difference or not but there was certainly no errant bumps or groans when I was going over some rough surfaces out there.

“I say it was surprising because we’ve got a lot of bikes on test this issue with wheels that would be perceived to be faster and stiffer but these Kysriums… we kind of underrate aluminium sometimes. These would do anything for you as a grade racer and especially as an enthusiast. The bike handled them really well too – not over reaching but doing what they need to do.

“I guess it’s as lively as the colour of it is and anyone who wants to look for one of the new road bikes shouldn’t bypass the trusty old Cannondales because while it looks pretty similar to the old bike, there is plenty to crow about. It’s a fantastic ride.” 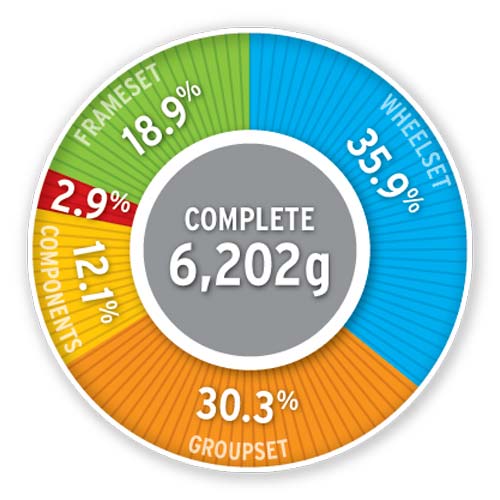