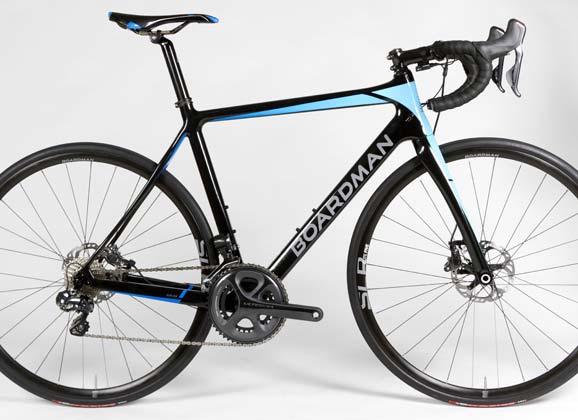 Chris Boardman is one of cycling’s most recognisable names. His efforts at the sport’s top tier are spoken about with fervour and his name is legendary. Boardman Bikes boasts a considerable catalogue that caters for those racing in elite circles as well as cyclists who enjoy pedalling in a more relaxed state.

This SLR Endurance Disc 9.4 is for, as reviewer Graham Springett put it, someone who “wants a quality bike which is at the leading edge… but has no need of the blade-like experience of 21st-century racing machines.”

The bike is equipped with Shimano hydraulic disc brakes, Ultegra Di2, and a complete suite of Boardman’s house components to finish the bike. All Boardmans are priced competitively and at $4,600, the SLR Endurance Disc 9.4 is no different.

For a slideshow of 31 images of the Boardman SLR Endurance Disc 9.4, click the image below.

Rob talking about the Boardman…

“It’s Rob talking about the Boardman with disc brakes. I’ve just been zipping around the block to get a taste of it. I jumped on it straight after a bit of a session on my new Trek Emonda which has got a higher front end, the H2 fit, and so I’m sort of growing accustomed to being a little big higher than what I have been in the past. But this Boardman is quite a bit higher and it didn’t put me off at all.

“To be honest, it was only a couple of minutes before I was getting into a comfortable position and I quite liked it… you can look at the pictures and tell that you’re going to get a little bit higher. It’s pretty obvious.

“What you don’t know at a quick glance of it is quite how robust it’s going to be – and this is, what would you call it? I wouldn’t call it a ‘comfort’ bike by any stretch.

“The ride that I did just before getting onto the Boardman was with Graham Springett who is going to test this bike out on the roads of Wagga Wagga. He was explaining [to me] that it’s a pretty thick, heavy, dead road in that environment so it’s going to be interesting to see what he thinks about this because my feeling is that he’s going to get a lot of feedback through both hands and bum, and even feet.

“This is a pretty solid bike.

“I’m guessing it might have slightly longer chainstays than usual, I’d say probably around 415mm because it needs to accommodate the thru-axle which is also employed up front, obviously – you’re going to have a set of wheels.

“I commented on a disc brake bike in the past, the Focus (RIDE #71), that the longer stays did seem to significantly alter the handling traits. I didn’t feel the same with this Boardman. It didn’t feel particularly nimble, but it wasn’t what I thought it might be with the slighter longer rear end.

“What I do want to talk about is the front fork with the thru-axle. It’s a very beefy design. I don’t know if it was a placebo effect from looking at it but it does appear to be very solid and riding it felt pretty robust at the front. I’ve used that word a couple of times in this little commentary and there’s good reason for it.

“This bike does seem to be designed for… I’m not sure. You would imagine that it would be a bit more of a comfort bike but it’s definitely not, not in my appraisal.

“I did like it. It didn’t take long to get accustomed to… if it’s not power tools it’s a jet engine in this area, I’m sorry about the noise… but I’m not distracted at all talking about this bike. There’s a lot to say.

“It’s going to be quite interesting to hear what Graham thinks after his time on the roads of Wagga.

“I think that they’re going to sell a few of these bikes because there’s going to be some heavier guys who are really going to find the benefits of what this technology has to offer.”