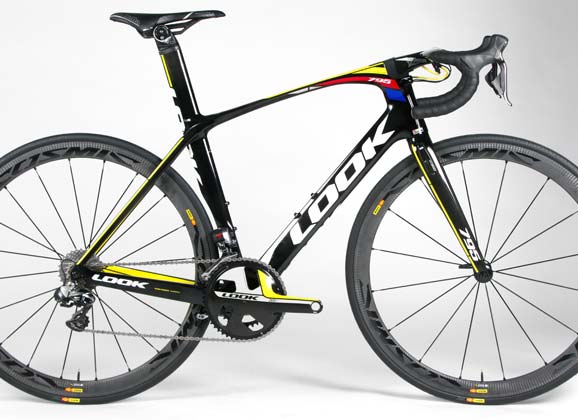 Every bike test in RIDE Cycling Review gets some online extras so that readers can see the intimate detail of all the close-up images, listen to some comments from the test team, get a look at the build process, and generally remind themselves of what has been examined in intimate detail in the magazine.

The first of the five bikes on test in #RIDE72 is by the innovative French company Look.

The 795 Aerolight is a spectacular piece of engineering. It boasts a most interesting head tube design that incorporates a cleverly integrated stem.

The bike was reviewed by Jack Lynch. “Make no mistake,” he writes, “this is super-quick and sprightly! Combining sturdiness with twitchy handling is the ultimate challenge and when it has been done successfully, the bike is truly magnificent.

“I loved taking this bike down steep hills knowing that it could handle any bend and I had a lot of fun pushing it on unknown terrain.”

For a slideshow of 31 images of the Look 795 Aerolight, click the image below.

“I’ve just been riding the Look 795. Finally. This has been a highly anticipated bike and it’s been quite a while in the acquisition phase. We build it up in Melbourne down at the workshop at Groupe Sportif, the Australian distributors, because it is a particular bike with a lot of interesting configuration…

“It’s got integrated front brakes which we’ve seen on previous iterations of high end Looks. But what we haven’t seen before, in this magazine at least, is the stem to top tube configuration which is pretty much seamless; it looks fantastic – it’s a stand-out feature of a stand-out bike.

“Either you’re going to like the aesthetic of it or feel that it’s [gone] a bit too far. But once you’ve had a little bit of time with it, I think you’re going to grow to like it. I certainly think it looks like something special.

“What I don’t like is one of the things that I lobbied for years ago, and that’s the monorail saddle. I don’t know if it’s the monorail itself or the saddle but it wasn’t very comfortable.

“Up front I really like [this bike]. It’s something pretty neat and riding it is a real treat.

“Visually it just keeps coming back. It looks special and you feel special on it – the sun came out for the ride that I had on a dreary day. And it was like that in my emotions. I was happy pedalling it.

“When riding [the 795] I had the saying from Team America going around in my head: ‘Everything is bon!’ This is a French fantastic. It’s a lovely bike.

“Going back to a little bit of nostalgia, it’s got these tiny little skinny tyres on, which I haven’t seen on a test bike for quite some time. I shouldn’t mock them because they’re Mavic [tyres], they are directional specific with a little bit of tread on the side – and it looks like it’s the wrong way – but going into corners it didn’t feel the wrong way. Even though there’s been a bit of rain and there was a bit of damp on the road, I felt really confident.

“It wasn’t squirrelly at all or sketchy. It’s a really nice handling bike.

“It’s hard to summarise the feel of the frame but it is different. This is the last of the five in this issue that I’ve ridden and it’s completely unique. All of the other tended to have one characteristic that morphed to the other – with the carbon bikes at least… this one doesn’t feel like any other carbon bike. It’s pretty solid.”