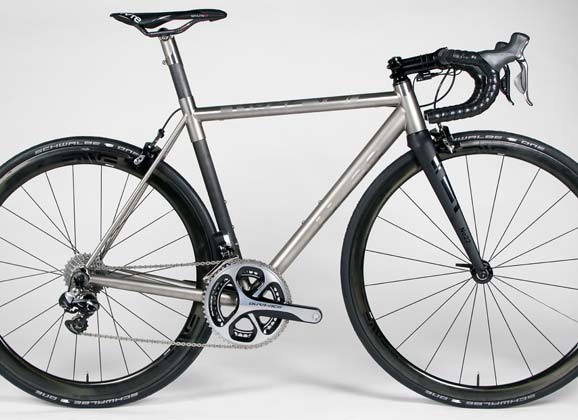 No. 22 is a Canadian-based company which builds its frames in New York’s Saratoga county. Those with a zest for handmade frames would know Saratoga as home of the defunct yet revered Serotta brand. No. 22 employed some of Serotta’s master frame builders so even though it is a relatively new label, there is experience and skill within the company.

The Reactor is No. 22’s race model. Its short wheelbase (964mm under a 530mm top tube) makes it very nimble – perfect for tight, explosive racing. Complementing this is the faultless Shimano Dura-Ace electronic ensemble and class-leading Enve Smart 3.4 wheelset with Chris King hubs (if you don’t mind)!

It’s a high performance bike and its owner will never tire of the complimentary remarks the No. 22 deserves.

The carbon seat tube is seamlessly bonded into the titanium frame and provides a nice aesthetic as it contextualises the matte black forks. No. 22 bikes are clearly constructed by expert frame builders who deliver each custom machine with passion and precision.

For a slideshow of 32 images of the No. 22 Reactor, click the image below.

Rob’s first impressions of the No. 22 Reactor

“I’m catching my breath after a ride on the 22. I think I start every titanium test ride with the same sentiment: I would love to retire on a titanium bike.

“I’ve tested a lot of bikes over the years and I think the first titanium one was a Serotta and that’s got some heritage with this brand insofar that staff from that company have moved on to 22. They were beautiful [bikes] 25 years ago – the work that they did – and they’ve only improved with age really.

“I think that this is a work of art. Everyone who sees it ogles it – it’s pretty apparent that people really like the aesthetic.

“With the glut of carbon on the market anything that comes in that looks a little bit different is really going to catch your attention and this is just a sheer classic.

“There’s a little bit of difference to the absolutely traditional titanium frame in that it’s got the carbon seat [tube] which is going to referenced in the test, and that looks smashing. It really does marry up well with the whole bike.

“It’s got some Envy wheels on it and quite an interesting sound to the freewheel but otherwise I didn’t really pay much attention to them because I was just looking at the frame most of the time and just trying to gauge how it rode.

“I wouldn’t say it’s got any real big stand-out characteristics. It just rides like I remember titanium to ride – and that is pretty lovely actually: just the right amount of feedback.

“It’s a bike you’d be proud to own and happy to ride; it would take on any surface. It’s not compliant and it’s not super rigid – or whatever… if I could get movement out of [the frame] I’d be lying. Down in the bottom bracket it’s as stiff as I need it to be. By that I mean there’s no movement at all… maybe bigger guys could work something out of it but it’s a pretty small frame so it’s nice and tight and it feels like it.

“It goes around corners like a little nugget. I’ve talked about ‘nuggets’ before and I’ll try and refrain in the future but this is what it is.

“I set off in the drops of the handlebars and I stayed there most of the ride to be honest. I was immediately using the sprint shifters which are a great addition to the Di2 – I highly recommend it.

“Lots to say about this bike. Whoever is testing it is going to enjoy their time on it, that’s for sure. I think that we’re going to see a fair bit more of this brand; it might be relatively new but it’s definitely got the ‘wow’ factor that’s going to pull people in.”