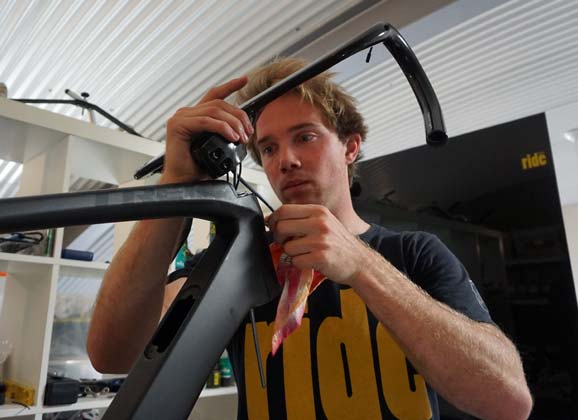 RIDE 69 will go on sale on 24 September 2015 and inside you’ll find a comprehensive report into the launch of one of the most anticipated bikes in quite a while: the Trek Madone 9-series. This is a completely revised bike that is at the top of the line of one of the most respected and accomplished bike manufacturers in the world. James Stout attended the launch of the bike in Wisconsin this June and he offers an overview of the culture of Trek with his report in RIDE #69. 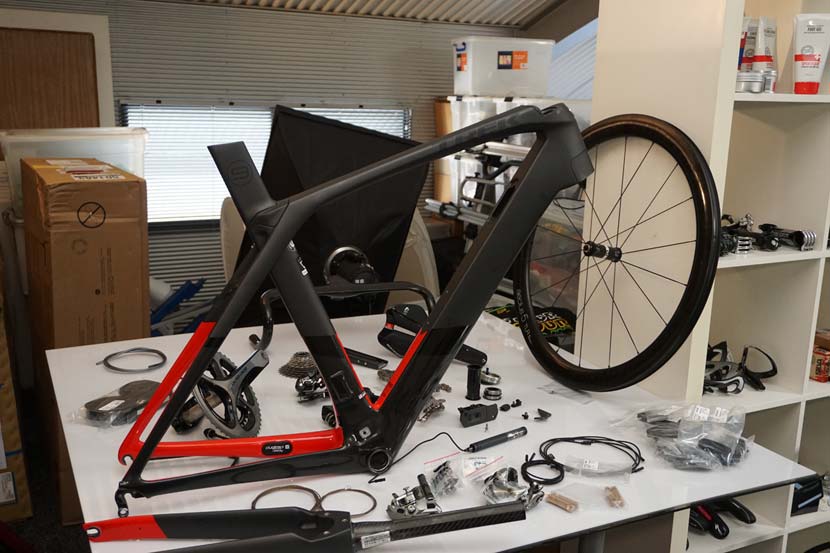 Since 2008, ‘The Build Report‘ has been a staple of RIDE Cycling Review. It explores the ins and outs of the bike build with RIDE‘s in-house mechanic showing the build process from bare frame to complete bike – and it allows us the opportunity to examine and weigh every component on every bike we test.

This Trek Madone 9.9 represents the new era of fully integrated aerodynamic road bikes and, given the glut of interest in this most intriguing bike, we wanted to share what we learned from our experience in the workshop with the Trek Madone. The bike has landed in Australia and several have been built and are now on display in bike shops around the nation… but we believe this is the only one that has been completely deconstructed before being rebuilt. 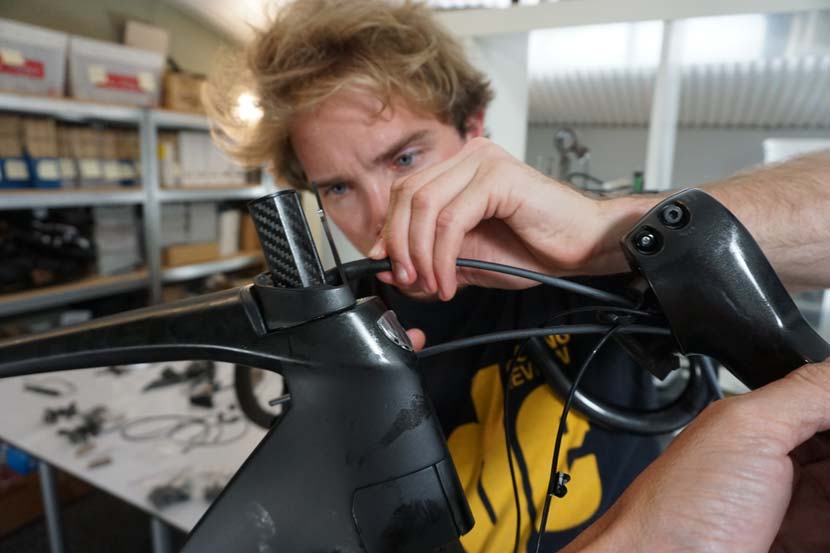 Any new release presents new challenges but this Madone was something all together different. Cables which are normally exposed at the handlebars and head tube are hidden, the brakes are a new design from Bontrager with more adjuster screws than any other caliper, the headset is a size never before used by Trek, the seatpost has a Domane-style decoupler and is an insertion post rather than the ‘Ride Tuned’ mast which Trek users have become accustomed to since the 2008 Madone.

When building, it became apparent that most things about this new Trek are unusual, yet nothing’s out of place. 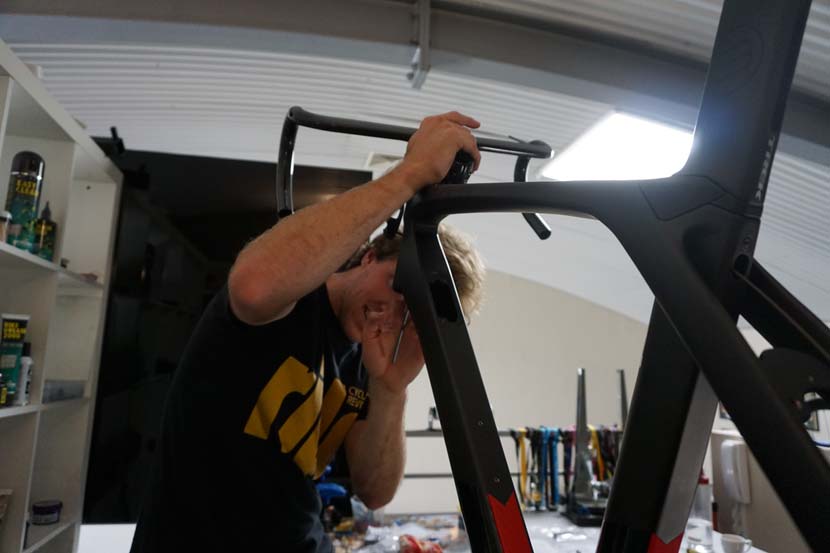 The forks’ carbon steerer is 1-1/2 to 1-1/8 but is not round. It has a channel on the front for the outer brake cable and is squared at the sides so the gear cables can pass through and move into the down tube through the head tube. Trek manages to stuff all these cables into a steerer with a unique top bearing and crown race combination.

In a first for the Madone, the top bearing is 1-3/8” and this is the secret ingredient for the internal cabling.

A wide bearing and narrow steerer tube with a thick, specifically shaped crown race means that there is enough space for the cables to pass through the frame without getting squashed or impacting on steering.

Routing the cables through the handlebars was a surprisingly easy process. The correct cable’s exit point is written on the stem so there can be no mistakes in cable placement. The rear brake has obviously been designed to US and European standards and there was some concern that an extra kink to achieve left-hand-rear might have reduced brake feel but it did not. This is largely due to an outer spanning the whole way through the top tube as well as snappy calipers.

Trek supplied a rubber sleeve to wrap around the brake outer and reduce rattling – a terrific idea that has been employed on a few new bikes this year.

Assembling the headset, forks, handlebars and cables was a little bit of a trial but when it finally came together, it snapped into place comfortably. The plastic spacers (which are split in two parts) have dimples built in which sit on top of each other and slot into the stem without any problems or risk of them turning when tightening the headset bearing. 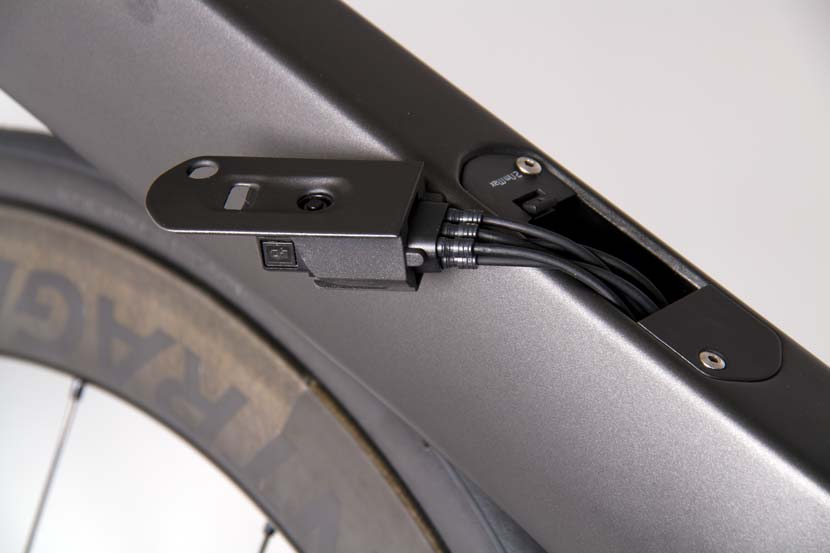 The saddle clamp is really cool. A bolt at the rear of the post loosens so seat angle can be altered without risk of shifting the rails’ position. A saddle is clamped from the sides with ears which are either carbon or round rail specific. It was really easy to fit the saddle. It clamped strong and was a cinch to fine-tune – only a road test will tell us whether or not it works.

Trek’s BB90 bottom bracket has been slightly refined with a better weather resistant cover sitting on the outside.

The old primitive red rubber cover has been replaced with a black plastic sleeve which connects firmly to the bearing. It should increase bearing life and create a smoother system.

Other than this, the BB90 was the same simple system with bearings pressed directly into the frame. There is the possibility that it will loosen and become creaky over time but this frame feels much more solid than some past generations of the Madone.

There is a lifetime frame warranty attached to every Trek bike to counter arguments of longevity. 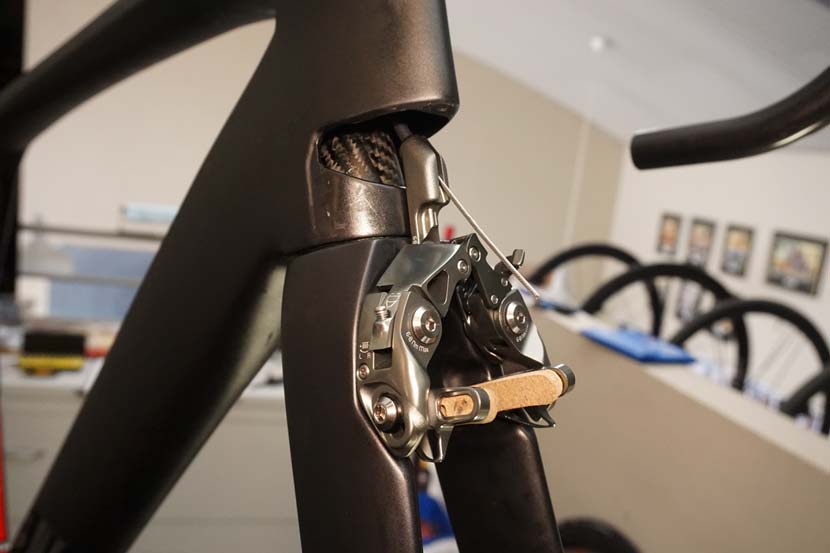 Bontrager’s first direct mount brakes for the Speed Concept – Trek’s TT bike – worked fine but were a nightmare to tune. It’s second attempt was for the most recent Madone. They were easy to adjust but felt terrible and the light alloy body never held its position.

These brakes are easy to adjust (after reading the manual), they seem firm, and the lever feel is incredibly snappy.

The brakes are set up with a triangular wedge (similar to that of the Speed Concept) and then the pads are brought in and spring tension is adjusted with the screws. If anything, these brakes seem to work too well but a test ride will quickly confirm whether they are the real deal or if it is a smoke and mirrors game and the quest for an aero advantage has compromised stopping power. 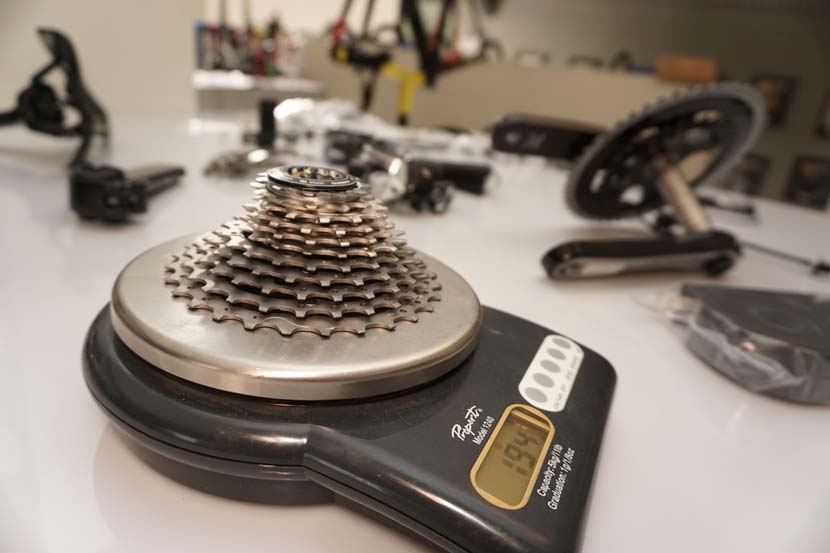 Dura-Ace Di2 with a Bontrager Aeolus 5 wheelset is a stunning combination that is simple set-up and should ride incredibly well.

The 50/34 chainring selection raises some questions. If this is billed as a super fast aero race bike, then why the compact rings? Stock tyres are 23mm wide but there is plenty of room for 25mm tyres so don’t worry too much about that if you’re a fat tyre fan. 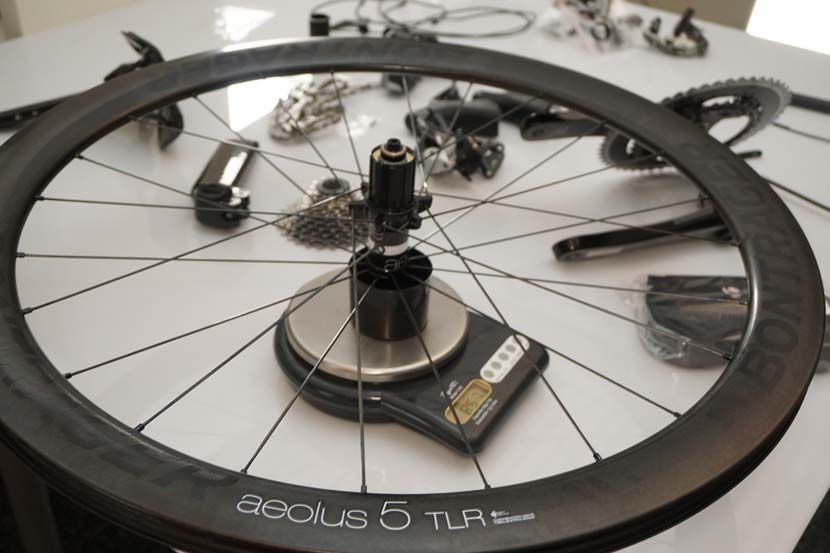 It was a challenge to build, but everything fit and worked well. The learning rate states that humanity improves speed of production with each item produced. This would be true with this Madone but let’s be real, few people would ever deconstruct this bike as seen here. It is almost an unreal test but shows that it can be done and when complete, little maintenance is required because everything is covered. Consider SRAM eTap and the Madone is an even more viable bike.

Internally, the bike is near perfect – there was almost no errant carbon on the inside of the frame or handlebars and that made cable routing easy. The external paint finish is good too. A lack of frame decals is an uncharacteristic restraint from Trek which was once renowned for adding acronyms and words all over its bikes.

This Madone speaks for itself and the matte/gloss black with red at the rear is really nice. Extra points for putting a gloss finish on areas of the bike that typically get dirty. Points removed for the fairly ‘safe’ design.

Every bike tested in RIDE Cycling Review features its own Build Report. You can find commentary from our mechanics on numerous bikes tested over the years. Be sure to use the search engine on ridemedia.com.au to discover a vast selection of bikes… we include numerous online extras once each issue goes on sale. 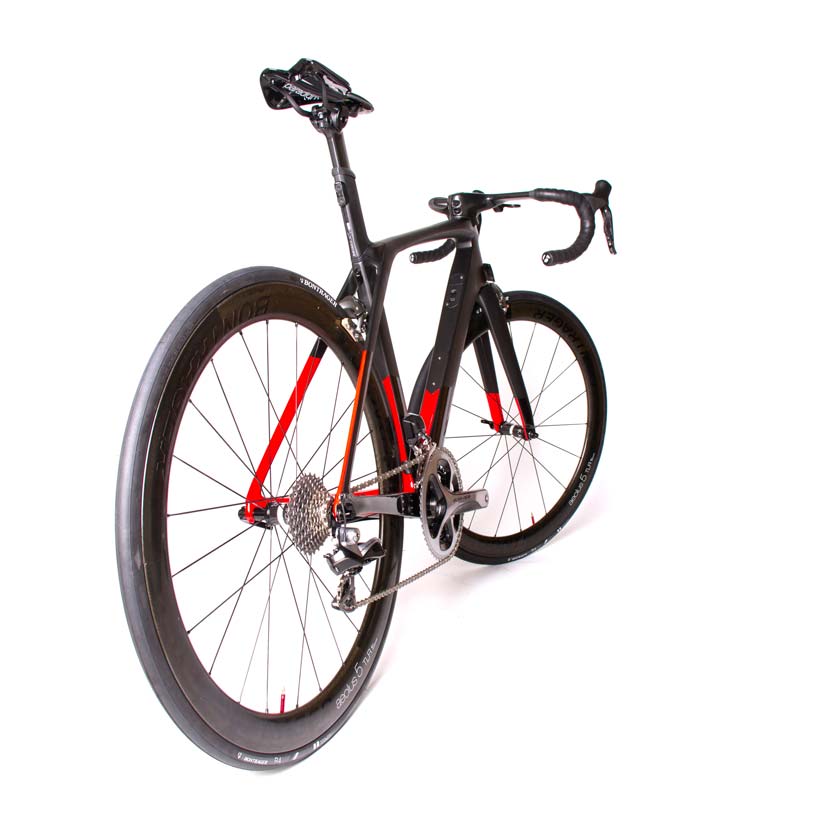 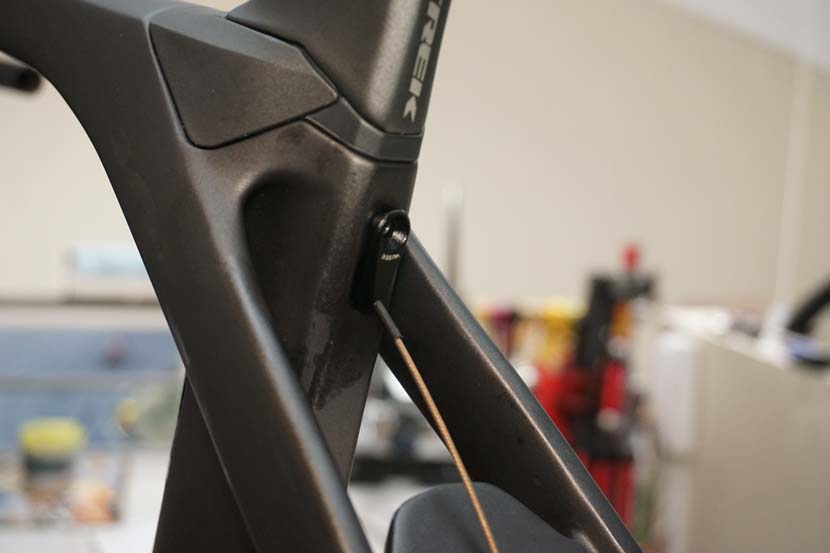 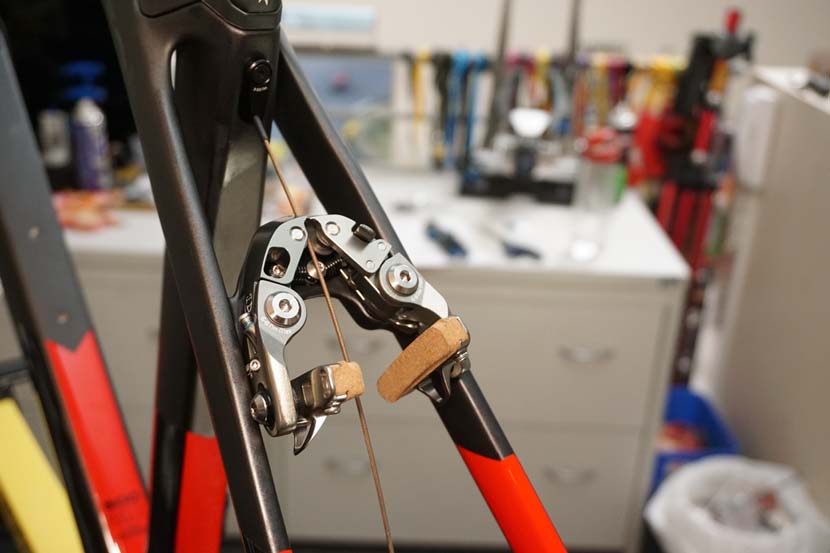 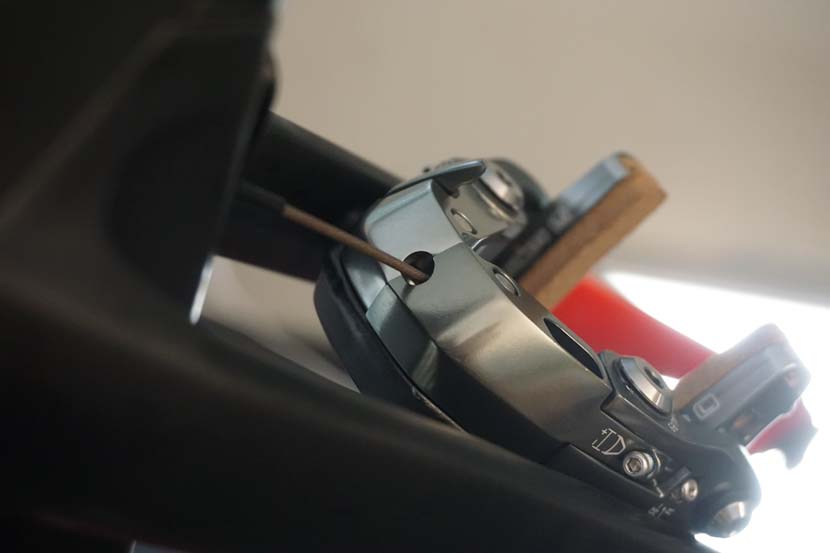