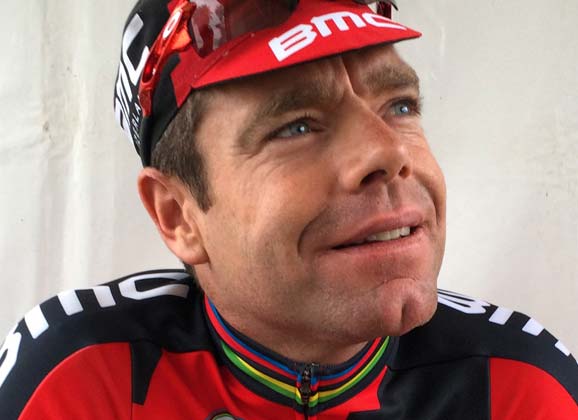 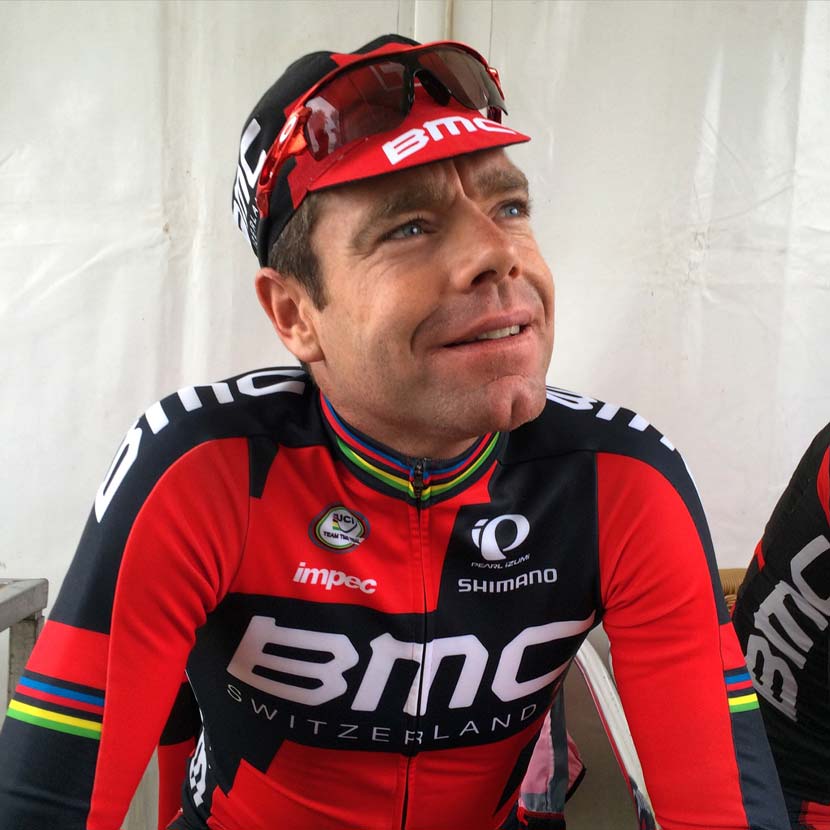 It was 20 years in the making, but the finish of a sporting career is inevitable. For Australia’s greatest cyclist, that moment was yesterday. It happened in a race named after him. Here’s a little tribute to mark the finish of Cadel Evans’ time as a professional cyclist.

The End… how it was 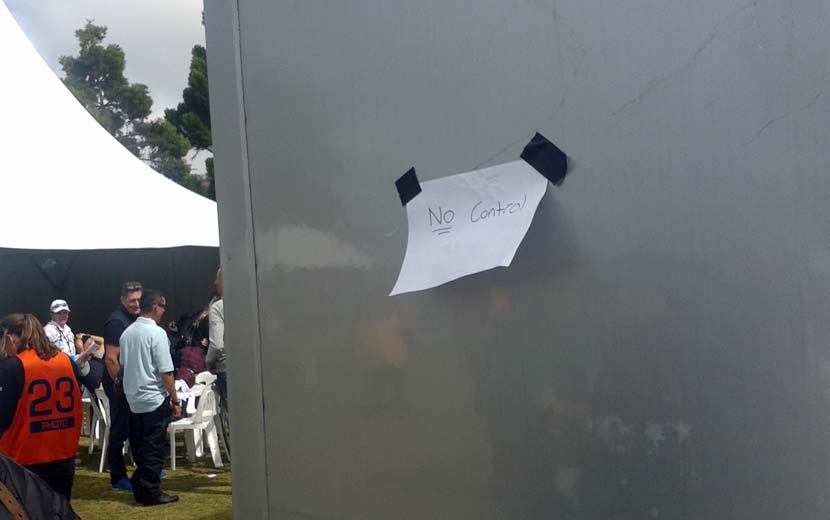 “No control.” So said the sign at The End. It was a race that came from naught but grew into something special. In relative terms, it came together quickly – and it had to. For all that Cadel Evans had experienced on the bike there remained one missing element and one, some said, he had no control over: retirement. It called out to him. And so it would be: a fortnight before his 38th birthday, he would compete one last time as a professional cyclist.

“I’ve learned a lot over the years but one thing I’ve never done before is retire,” he said on the morning of his last race. As of today he’ll discover how to come to terms with an entirely new task: the management of every-day, ordinary life.

He’s no ordinary person and the new challenge is going to be a significant one.

Physically, he could have continued on a while longer. Perhaps he would not have been at his best – for that was several years ago and it was really quite phenomenal – but there is plenty of life left in those legs yet.

Ultimately he’d roll across the line in fifth place in his last race. 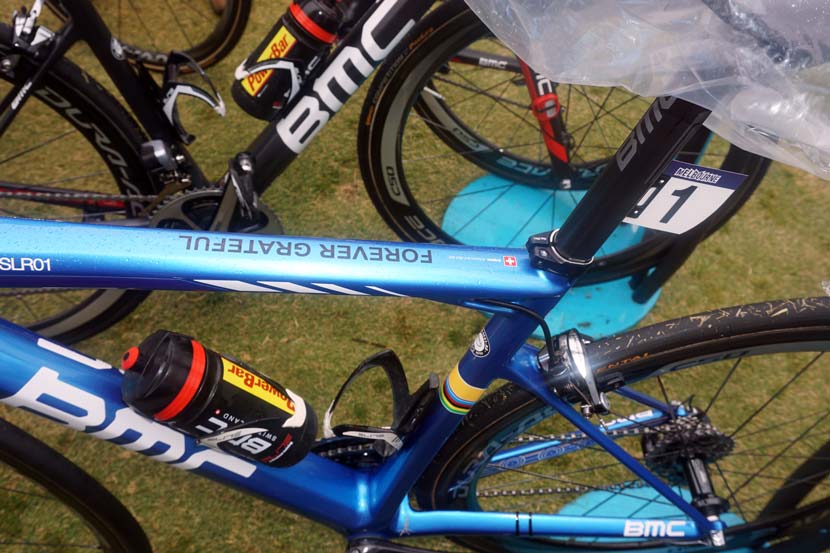 “Forever Grateful.” So said the words on the top tube of the last bike he would race.

He’d bow out in grand style: a number-one dossard on a special blue BMC and the chain in the big ring for the final climb of his career. Power, commitment, grace and – in the eyes of many – humility… that’s how he’s portrayed and it’s how he strives to live. He often hits the mark but let’s be sure that the story about The End is not only a hagiography for there’s always more to the story than what is seen on the screen or, as the case was for this finale, one of his adopted backyards.

Over the years there has been plenty of commentary on his accomplishments – much of it kind, some of it brutal… but all of it lapped up by a public that wanted to know more about a most effusive personality. Did anyone ever get to know Cadel? A few have had close contact with him but even they don’t fully understand him and his many idiosyncrasies. Still, there was an overwhelming sense of admiration on that last day in and around Geelong… 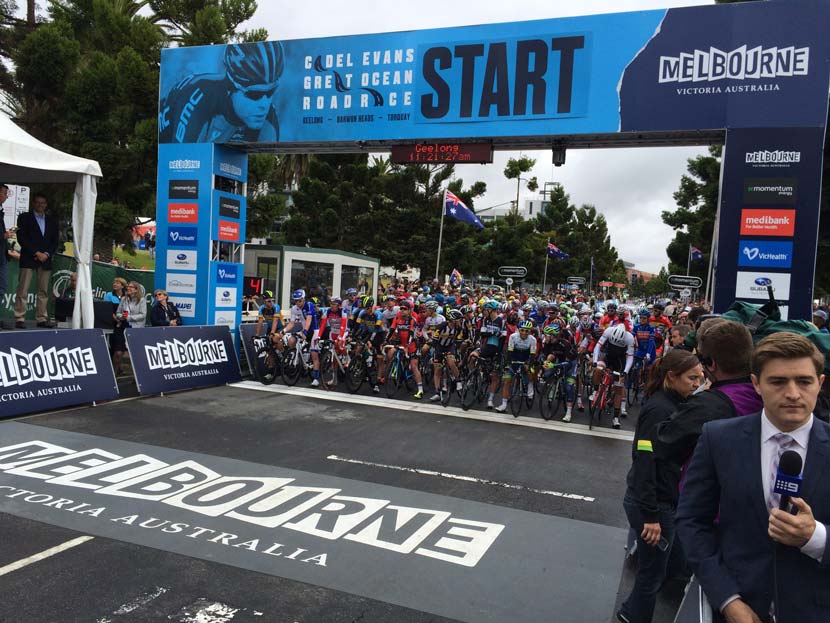 “The Cadel Evans Great Ocean Road Race.” So said the title of the last one. It was originally earmarked to begin as a ‘Classic’ – but how could it be if we didn’t know what would come of it? The race that was rushed in preparation – because events of this scale are never easy to piece together – would ultimately live up to expectation. It was a genuine contest with a vast cast of international stars vying for the inaugural title against an equal smattering of domestic trade teams. And while Gianni Meersman took the win, he is not what this contest will be remembered for.

Cycling has come a long way in the time Evans has been a professional. On the road and off it, he helped shape the way racing was perceived by the Australian public. And it is clear that he retained his pulling power right through to the very end. It was his presence that lured many visitors to ‘his’ part of his country and despite the best efforts of the weather gods, it provided a showcase of what road racing is. It represents opportunity for the bold at the same time that it punishes the weak; it rewards and steals in equal measure.

One takes out of it what one is prepared to put into it. Cycling, the bastard of a master, can demand a lot at times. Still, if one is resilient enough, stubborn enough, strong enough, and – of course – sufficiently supported, then there’s a reason to answer a call that otherwise might be ignored.

Cycling often doesn’t make sense. Against all odds, in a country where the car seems to be lauded by politicians and planners, the bike is able to thrive. In other places around the world, it’s exploited for its transport benefits and then come the sporting aspects and sundry elements that come from the act of pedalling. In Australia, it seems that sport is what’s driving the popularity of riding. Cadel Evans can take much of credit for this. He is an inspiration but let’s not gush too much before stating the obvious: he can be socially awkward at times. 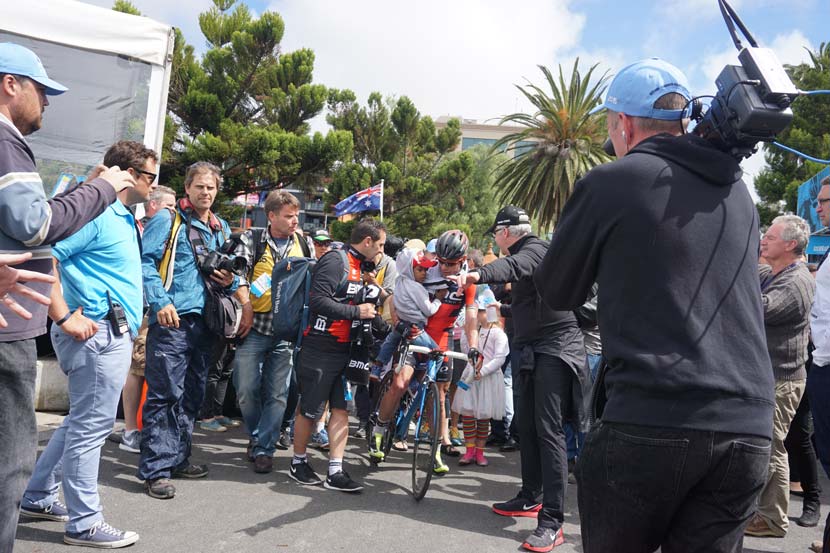 On Sunday 1 February 2015, he would ride away, onward to the rest of his life with his son on the top tube of his bike and a horde of photographers ahead of him (and in his wake) to document the final moments as a pro cyclist.

He would end his career amidst a flurry of praise and a repetition of the many accolades he’d acquired. There are plenty of other descriptive terms for the manner in which he presents himself to the world. ‘Odd’ is one option but there’s not need to pour scorn on him now. He battled through the most awkward years; the close-calls and could-have-beens frustrated him. In 2008, he was the subject of ridicule despite his efficiency on the bike. YouTube clips elevated his fame but for all the wrong reasons.

Like all of us, he has a temper and there are times when he was pushed beyond his comfort zone because of the attention he generated.

There are many phases to Cadel Evans and the best of them formally began in 2010 when he joined the BMC team. It’s with this bike brand that he’ll help adapt to life as most of us know it: not some fantasy land in which one can ride a bike and be paid handsomely for doing so… but a place where we wake to a day-to-day grind.

Since his teenage years he’s raced a bike for a job and that’s all he knows but there’s a wide world out there waiting to be discovered from a different perspective. And it’s as an ‘ambassador’ for BMC that Evans will now earn a salary. It’s a title for an ambiguous position that he’s tried to explain in recent days and he’s bound to be as professional as he always has been in his quest to help the Swiss brand make better bikes. But let’s be honest, his real new job is the best one a man can have: father.

For the early years of Robel’s life, he’s seen plenty of his dad but now there will be time for more of each other. There will be time on the bike and rides for years to come but also other adventures away from the cycling life and into the big, wide expanse of The Ordinary.

The vitriol and nastiness that had prompted headbutts, odd terms of expression – inference of violence because of interference with his dog – were all set aside once Evans joined BMC.

During his final years in the sport he did become an ambassador. He is still a curious character with a unique manner but he’s grown into the attention lavished on him even if he’s rarely entirely comfortable with it. By the day of the end of his career, he recognised the reality: he may as well lap it all up – these are, after all, The Glory Days.

Evans has been mocked and admired. He has lost more races than he won but all the while there have been many alongside him for the ride. It’s been a hell of a journey and it’s difficult to paraphrase a 20-year career in a quick summary of thoughts conjured on the final day of professional competition.

Perhaps we will get to witness how he handles The Next Phase, or he may become more reclusive now that he has that opportunity. Gone are the moments when he has to be Out There, on display – doing what he does in front of the public. Now is the time for him to focus on himself, his family and those dear to him.

In the lead-up to February 2015, the commentary on Cadel was built up largely of praise, praise and more praise. That’s how sport is in the modern world; the best of the best can be forgiven their curious discrepancies – at times even applauded for there is a steady supply of sycophants to pump up the ego, massage the image, accept the oddities and laud the impact of endeavour.

Speak to enough people involved in cycling and you’ll get praise and scorn in equal measure when discussing the many aspects of Cadel Evans. His personality is unique, there’s no question about it. And there’s no doubt at all that he’s an absolute one-of-a-kind when it comes to physiology. He’s a remarkable specimen on many levels.

One thing is universally acknowledged: he’s a very good bike rider. That was as obvious when he was four as it is when he’s about to turn 38.

The End has arrived so it’s time to enjoy The Beginning. 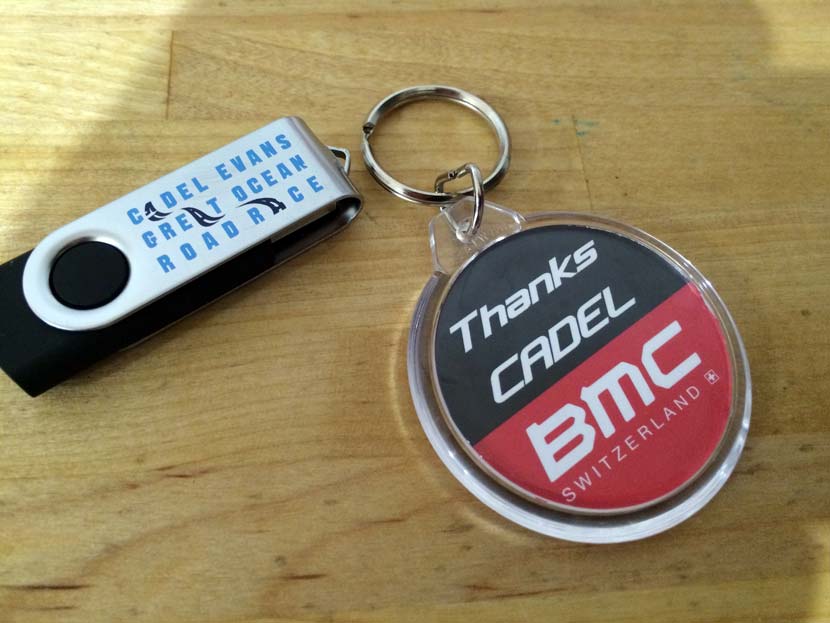 ‘Thanks Cadel.’ So read the words on souvenirs that were on display all around Geelong on the final day of his career. It’s the sentiment many have when they consider what he has done on a bike. The conquests are over. The stories have been written. The time to reflect has come.

There was ‘no control’ at the end of the Cadel Evans Ocean Road Race. Doping tests were not a consideration for the organisers, it’s an ironic twist for an event named after one of the so-called ‘clean ones’. He rode through an era tainted by a topic that rarely touched him and yet he succeeded along the way. No one ever knows for certain that everything achieved was utterly pure but one of the reasons the end of this career was so well celebrated is because there’s a belief that his legacy is a good one, an honest one. He never lost hope, nor should we.

Cadel Evans has seen a lot from the saddle of a bike and we’ve seen a lot of him in that position: much of it good, some of it odd, some of it sad, and some of it bad. But that’s what adds to it all – he is remarkable, but he is human.