There are only two Australians in the Tour de France of 2020 and one of them, Caleb Ewan, has earned a victory in stage three. A fine sprint in Sisteron provides some joy for the Lotto Soudal team which lost two riders to crashes in stage one.

Judging when to go in a sprint finish requires a mix of patience, skill and an understanding of what your rivals are going to do. Caleb Ewan possesses these attributes and, when combined with a stunning surge of speed, it nets impressive results. 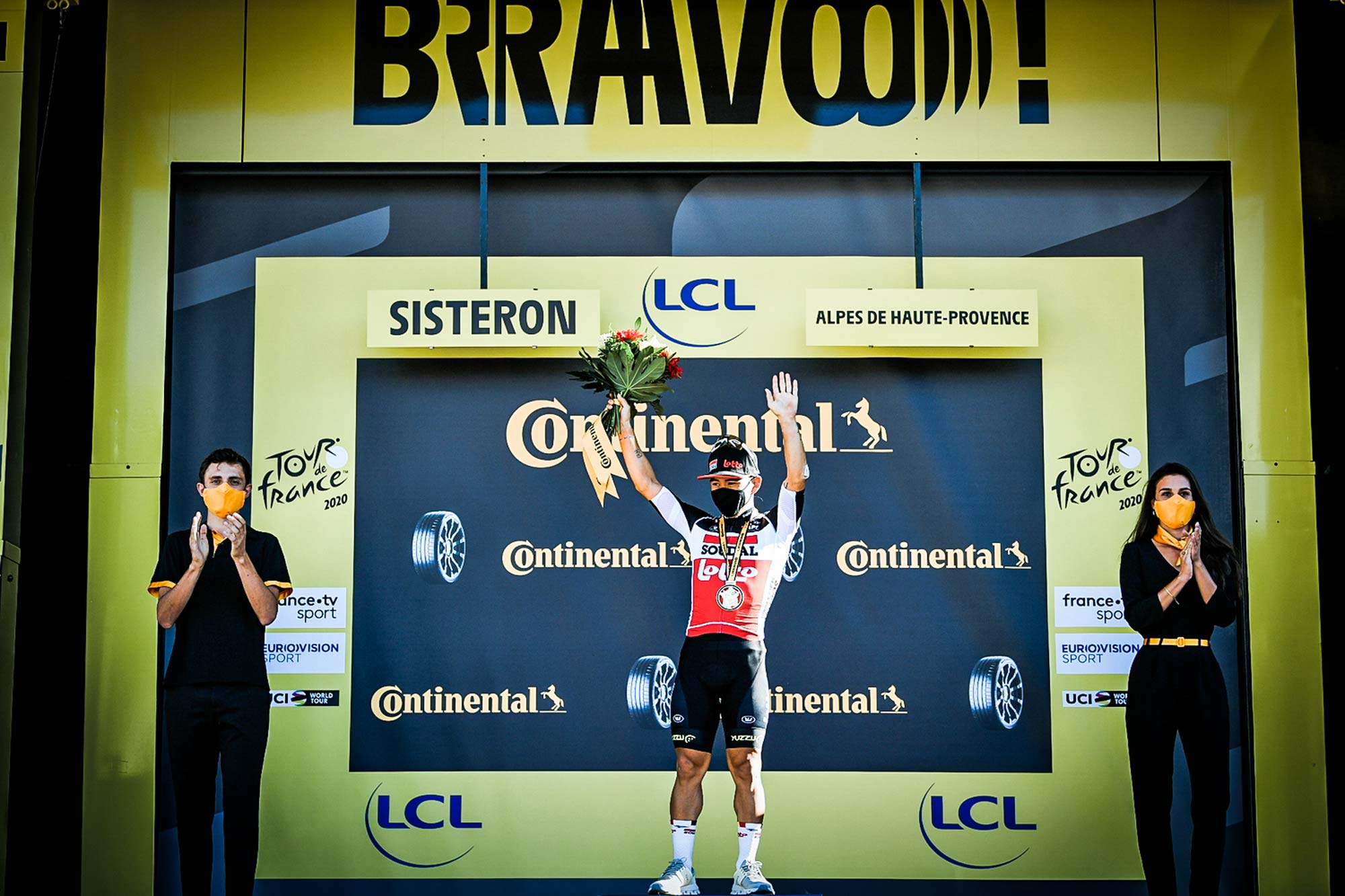 With 400m to go in the sprint for stage honours in Sisteron, he was well out of the picture. Middle of the road, hidden from the wind by other sprinters and searching for a way around while biding his time. At 60km/h, he reads the race like it’s in slow motion, sees gaps that barely exist, and finds a way to showcase his speed.

With 300m to go, the lead-out men had peeled off and Ewan was still stuck behind. Then it was business time and he found a way around.

“With one kilometre to go,” he said in Sisteron. “I was too far behind and I took the risk of going even more backwards to find a good wheel.”

Eventually, with 200m to go, he found a gap. Over to the righthand side of the road, onto the wheel of the Irish champion, Sam Bennett, and then a slight move to the left and ahead was open road and the finish line.

“I think I rode close to the barriers but luckily I got through,” explained Ewan. After coming off the wheel of Bennett there was only time for a couple of pedal strokes, but they were powerful pushes by Ewan and it gave him the burst of speed he needed to get to the line first.

He went right, he went left but he was finding openings, not riding dangerously or hindering anyone else. Rather, he knew what he had to do and got through to claim his fourth Tour de France stage win, his first in 2020.

“My first victories last year were very special,” he said, “but this is the Tour de France – it’s the biggest race in the world and I’m still super happy to win. I hope for more wins to come, this year and beyond.” 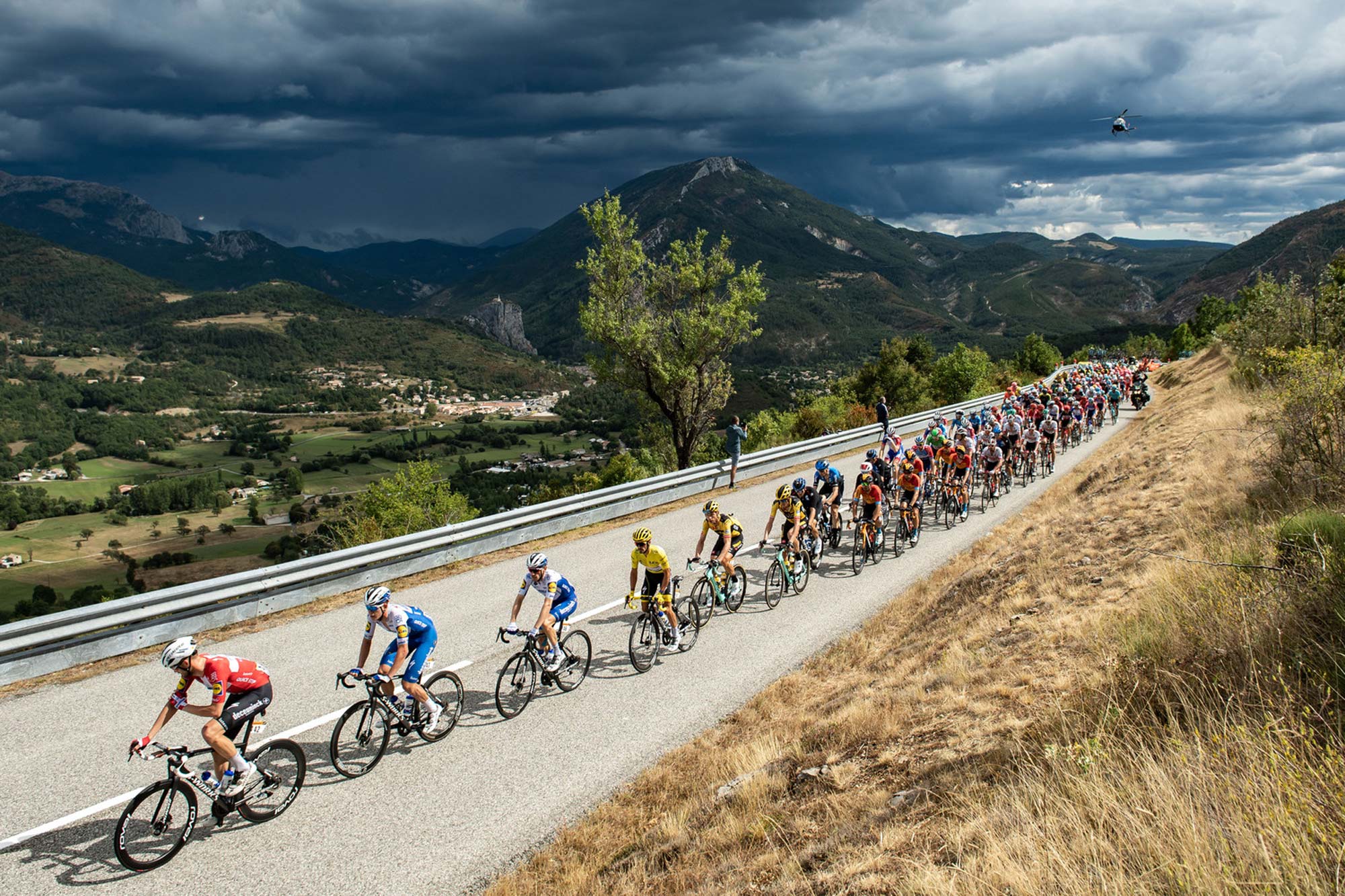 After 2 days of racing near the sea, the itinerary took the peloton inland by 200km. The winner of stage 2, Julian Alaphilippe, finished stage 3 in 53rd place in the bunch of 143 who arrived with the same time. (Photo: Alex Broadway, ASO)

Julian Alaphilippe retains the yellow jersey and there was no change to the top order of GC on a day when the peloton seemed to take a collective breath and agree to settle things down a little after a frenetic opening weekend of racing in the delayed Tour of 2020.

The top three in Sisteron were Ewan, Sam Bennett and Giacomo Nizzolo, who all began their season racing in Australia, all winning stages of the Santos Tour Down Under. The difference between the Aussie, the Irishman and the Italian is that Ewan’s team is now down to just six riders; Bennett and Nizzolo, however, have a committed lead-out sequence.

Lotto Soudal suffered badly on the first day with crashes forcing two of its star recruits, former Paris-Roubaix winners John Degenkolb and Philippe Gilbert, out of the Tour almost as soon as it began.

“We are down to six riders,” said Ewan in Sisteron, “but everyone stayed motivated and gave 110% to replace the two missing riders so I could win. Because we knew I could win today.” 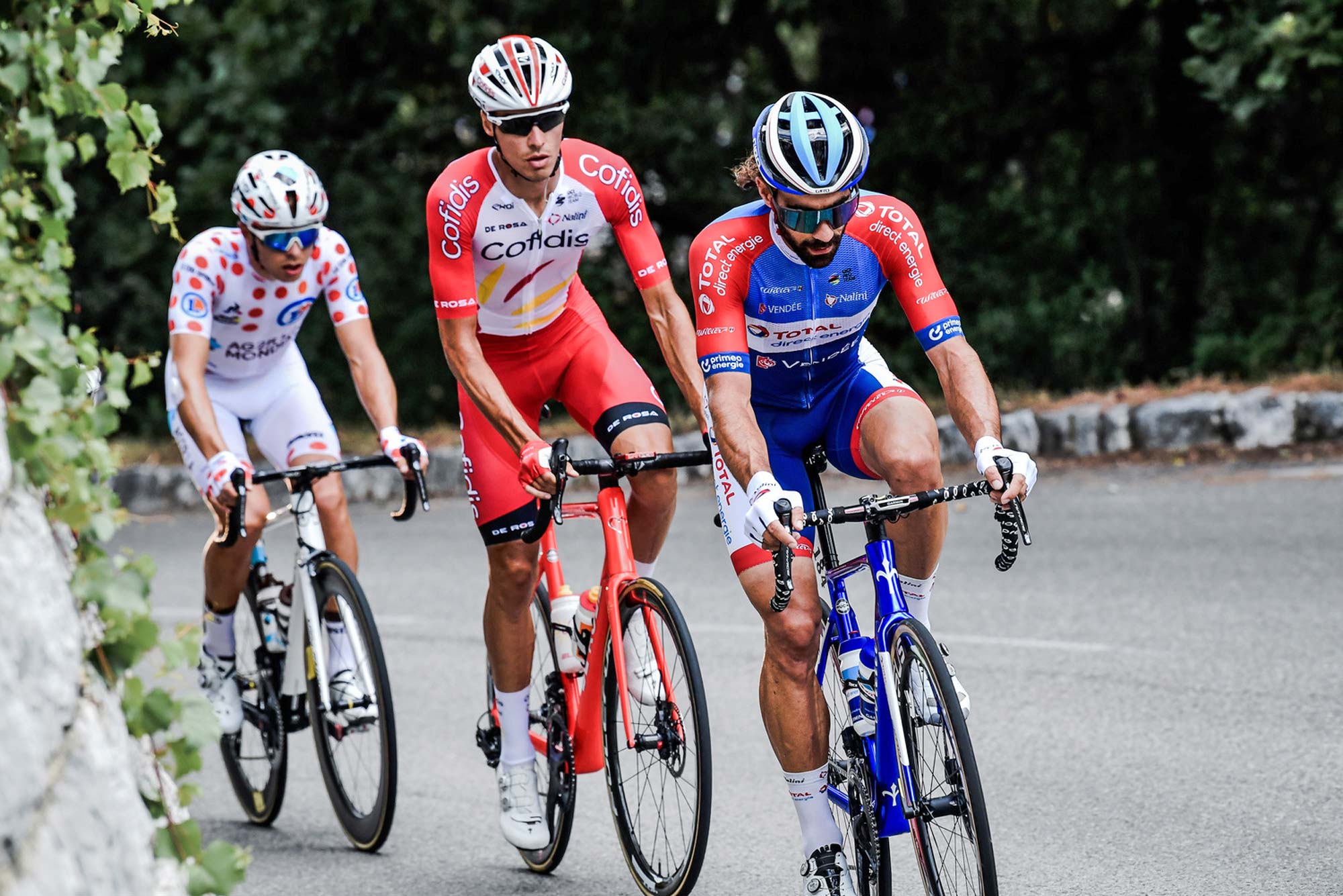 Cousin leads Perez and Cosnefroy in stage 3. Perez was first over the first two climbs on the road to Sisteron, but he crashed out with a broken collarbone. (Photo: Pauline Ballet, ASO)

When there’s a whiff of a win, Ewan is ready. Unlike his triumphs in Toulouse, Nîmes and Paris last year, however, the build-up to the sprint in Sisteron was relatively calm.

The average speed of what is classified a ‘flat’ stage of the 2020 Tour was just 37.39km/h. It’s rare for a stage of the Tour de France to be raced at such a pace.

Only a day earlier in stage 2, when there were two cat-1 climbs and one cat-2, the average speed for 185km was a little faster (37.57km/h) but the difference was the terrain… and the attitude of the riders.

One escapee for much of the day prompted a surprisingly calm approach to the finish in stage 3 and Ewan was able to live up to lofty expectations with a well timed surge when the sprint did eventually open up.

He now has 50 points in the race for the green jersey but the goal clearly remains to win stages, rather than try to take on Peter Sagan who has dominated the Tour’s points classification since 2012.

Sagan has 79pts, leading the winner of stage 1, Alexander Kristoff (78pts), Bennett (74pts), Matteo Trentin (54pts) and Ewan. Take note of the intermediate sprint placings in stage 3, however, and the Australian didn’t earn a point. The green jersey? It’s tempting for Caleb but it’s not a priority.

The points were absorbed by the lone breakaway rider in stage three, Jérôme Cousins, then Sagan, Niccolo Bonifazio, Nizzolo, Kristoff, Daniel Oss then Bennett… Ewan earned none, and we can assume that this was part of the plan. Save energy early in the stage, and put it to use at the finish.

When Ewan needed the speed to get around Bennett in Sisteron, he had it. He also found a clear path to the front. And, with that, good reason to celebrate.

Three stages in, one Aussie win. It’s been a good Tour already for Caleb. 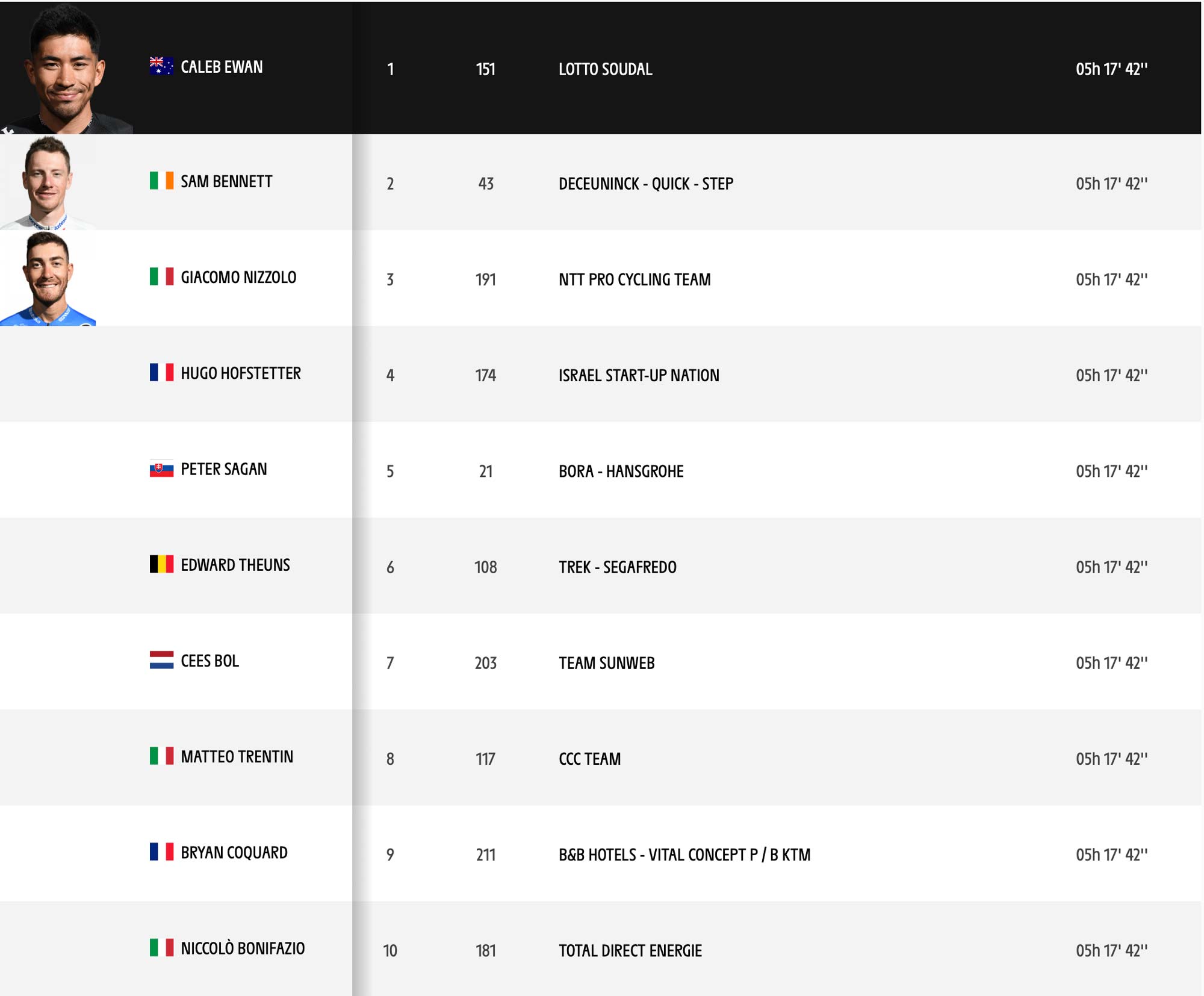