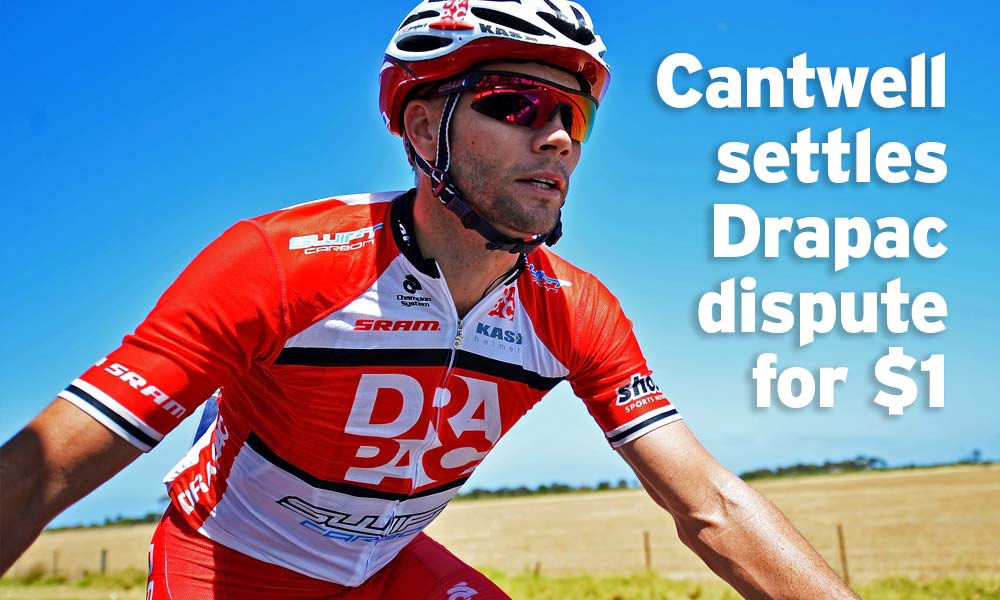 Two weeks prior to a scheduled court hearing, former pro rider Jonathan Cantwell has settled a dispute against Drapac Professional Cycling. His original claim against his team from 2014 was $1.2 million but the 36-year-old received $1 and the matter is closed.

Two years ago, Jonathan Cantwell launched legal proceedings against Drapac Professional Cycling, suing his team for 2014 and claiming it had breached its contract by terminating his position at the end of the season. The case was scheduled to be heard in the County Court of Victoria on 21 May 2018 but the matter was resolved on 8 May with an out of court settlement.

According to the team, “Cantwell claimed in excess of $1.2 million in damages plus interest and legal costs.”

Ultimately, both parties agreed to conclude the matter for a payment of just one dollar.

A statement from the team has outlined details of the case and the director of the team, Michael Drapac, says he is satisfied with the outcome.

“Whilst Drapac Professional Cycling would have been content to fully ventilate its position in Court,” reads the statement, “it is very pleased with the outcome and considers that the settlement demonstrates a complete vindication of its position, and its termination of the contract.”

Cantwell had an association with Swift, the supplier of bikes for the Drapac team in 2014, managing sales and distribution for the brand in Australia. He opened a shopfront for Swift in St Kilda and managed the business while under contract with the Australian-registered team.

Despite being one of the highest paid riders of any Australian domestic team, with an annual contract of ±$160,000, Drapac claimed Cantwell did not fulfil even some of the basic requirements of his job.

Once the settlement was reached, Drapac Professional Cycling stated that there were “multiple flagrant breaches of the contract by Cantwell which entitled it to terminate” and yet the former rider insisted he was entitled to receive damages. 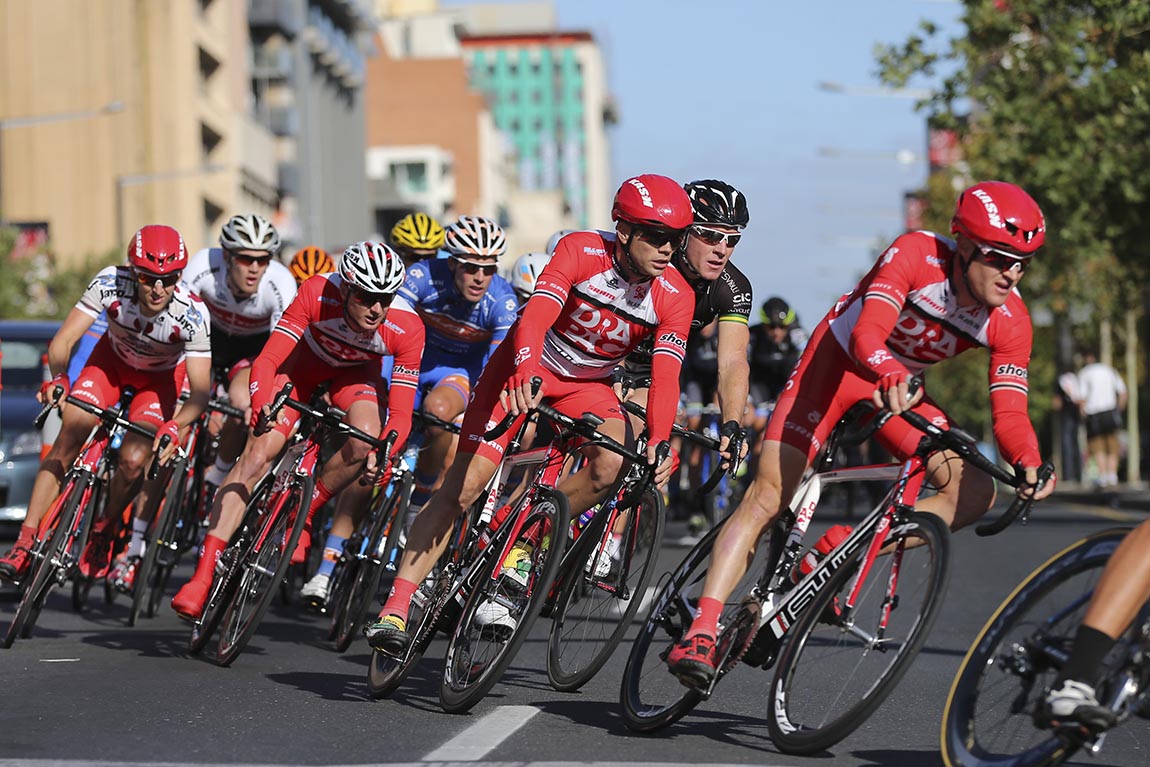 Cantwell was part of the Drapac Pro Cycling team that contested the Santos Tour Down Under in 2014 (above).

The legal action received media attentionwhen it was instigated in May 2016 but the figures quoted didn’t reflect the actual size of the claim. Cantwell was said to be seeking a payout of $300,000, significantly less than the $1.2 million potential liability for his former team.

Drapac explained that there were numerous breaches to the contract that entitled the team to terminate Cantwell’s three-year contract at the end of his first season. The rider was fully paid for 2014 but that’s when the relationship ended.

Issues of concern related to non-disclosure of his commitments with Swift, “a failure to undertake adequate training loads”, and “various other misconduct, including requiring special treatment for attendance at training camps and encouraging riders whilst in a race to act contrary to team tactics”. 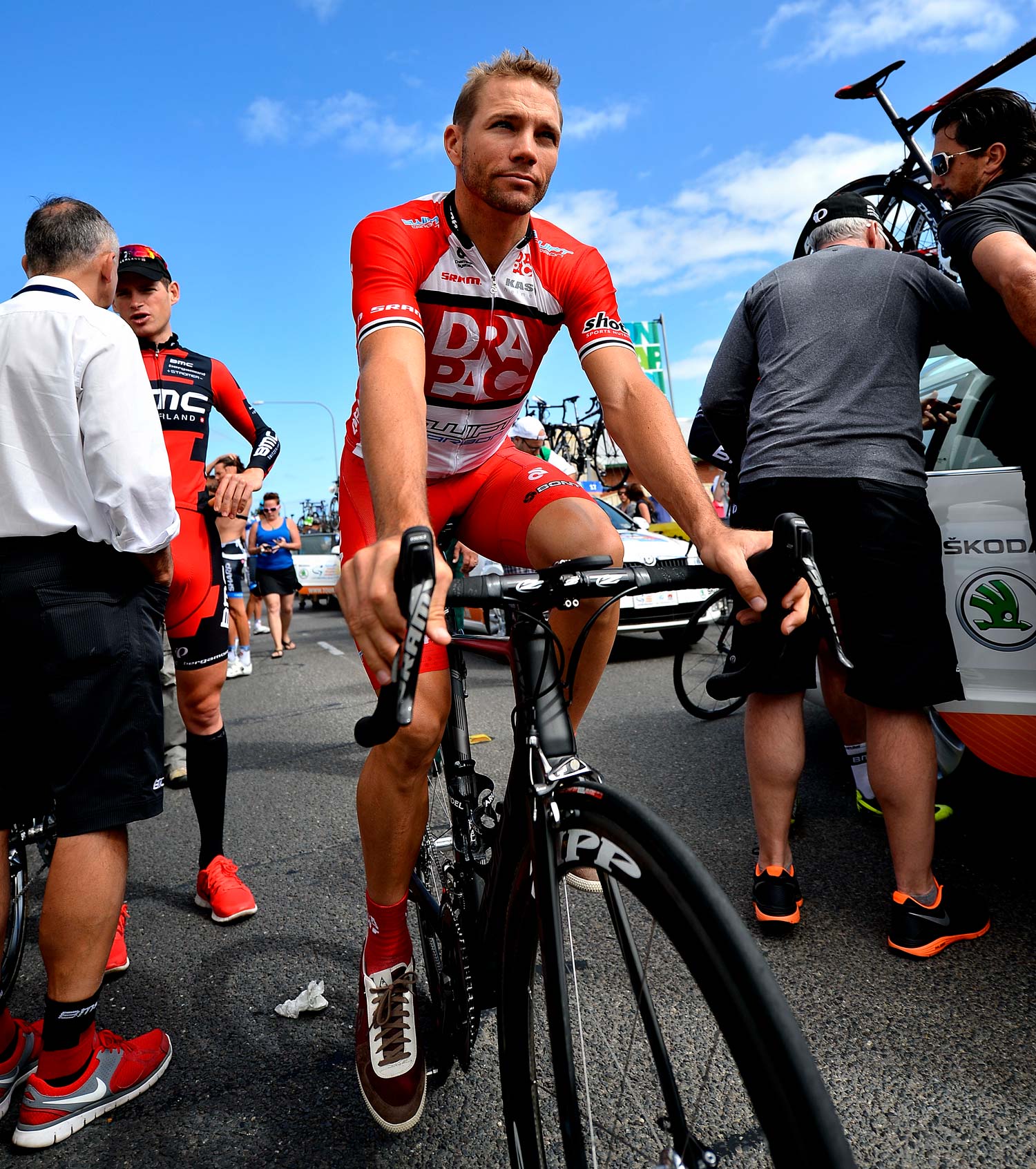 Cantwell, now 36, raced as a professional from 2008 to 2014. After a brief period of employment with Peter Teschner, a frame builder who was based in Coffs Harbour for many years, the sprinter decided to refocus on his cycling career. He raced for Jittery Joe’s (2008) and Fly-V Australia (2009-2010) with the focus of competition in the USA.

After the collapse of the V-Australia team, he joined a WorldTour team and enjoyed two seasons racing with Saxo Bank (2012-2013) before signing on with Drapac.

In April 2016, he was diagnosed with cancer after consulting a GP for what he believed was “a cyst”. It turned out to be a tumour which was removed in a surgery. A year later, he declared: “I beat cancer.”

By then the court action was well underway. Originally reported to be suing Drapac for “$297,734 in lost earnings”, it grew to over a million dollars, plus legal costs, by 2018.

For Michael Drapac the matter has served as a reminder that there is much more to pro cycling than riding bikes and trying to win races. The businessman is now a co-sponsor of a WorldTour team, EF Education First-Drapac (powered by Cannondale), and he is concentrating his energy on business initiatives in the United States.

The settlement provides Drapac with a sense of relief although he admits that he would rather never have had to consider the case.

“Drapac Professional Cycling always considered the claim to be an unmeritorious and opportunistic claim brought by someone who had failed to comply with the most essential duty of a professional cyclist – to give his best effort in preparing for the team,” concluded Drapac on Cantwell’s legal action.

“[The team] considered that this was in part due to the failure by Mr Cantwell to properly disclose prior to entering the contract the commitments he had taken on in addition to his commitments to the team. Drapac Professional Cycling is very pleased with the outcome and to finalise the matter and looks forward to future cycling successes.”

One dollar was transferred into Cantwell’s account last week.