Carapaz takes the lead of the Giro, with Hindley 2nd on GC

“We had a bold plan,” said Jai Hindley of Bora-Hansgrohe after the 14th stage of the Giro d’Italia. As the race arrives in the final week, the Australian is now in 2nd place on GC. Richard Carapaz is the new race leader and Hindley is only seven seconds behind the Ecuadorian from Ineos Grenadiers. 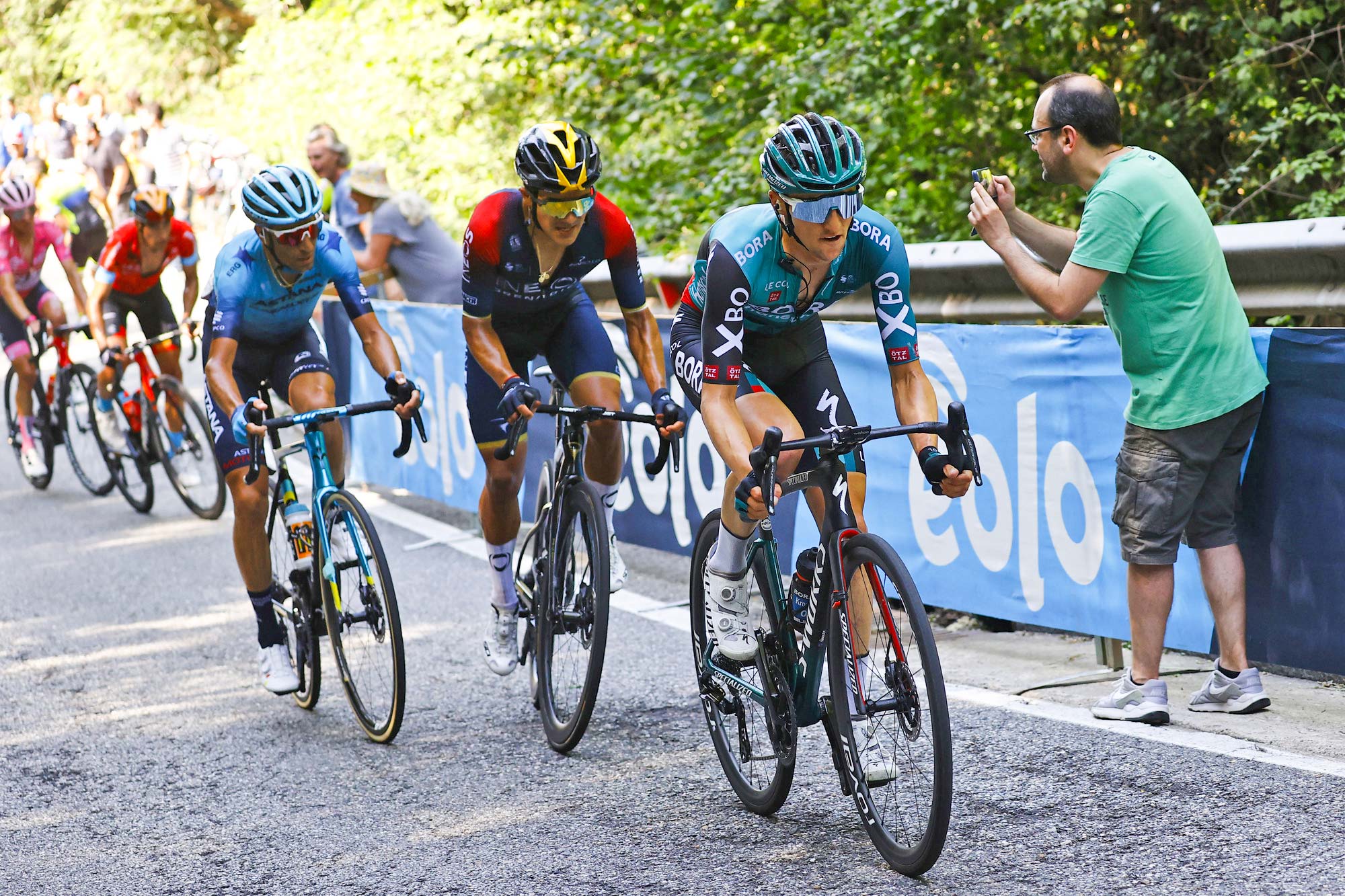 The winner of the Giro d’Italia three years ago, Richard Carapaz, is back in the maglia rosa but for Australian fans, the big story of the 14th stage relates to Jai Hindley’s second place after an animated stage on the climbs around Turin. The Bora-Hansgrohe rider jumped up the GC rankings and he is now just seven seconds shy of the race lead.

“We had a clear goal,” said Enrico Gasparotto, the DS from Bora-Hansgrohe who explained the bold tactics employed by Hindley and his team-mates. “Our plan was to ride aggressively and try to isolate some of the GC riders and take some time from them.”

At the end of the 147km race there were a couple of success stories for Australian cycling: a stage win for the Aussie team, courtesy of a resurgent Simon Yates – who started the Giro with hopes of winning the title but faltered on stage nine, with a knee injury hindering his overall chances – and Hindley’s second place in Turin which moves him up to second behind pre-race favourite Carapaz. 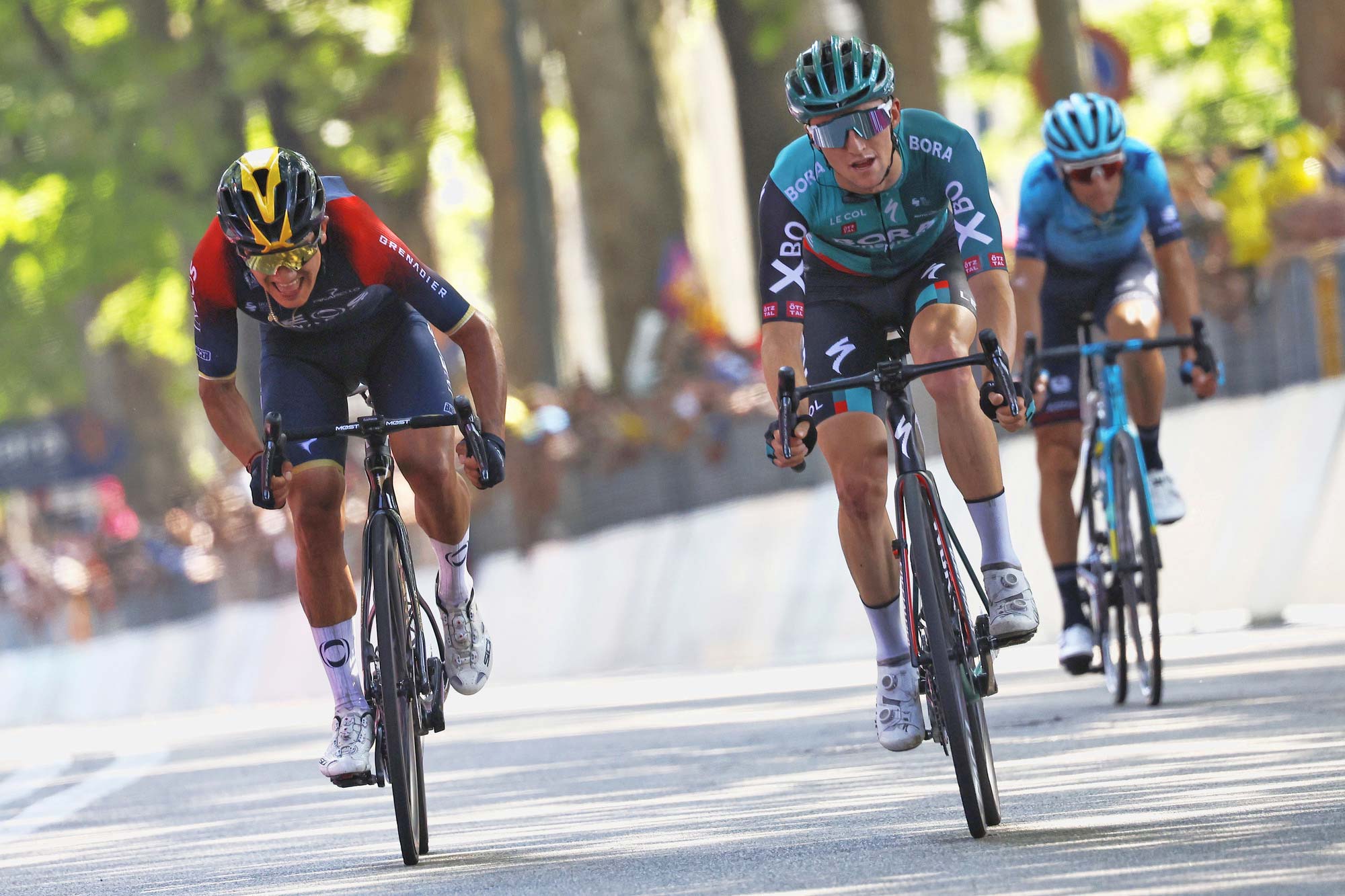 Juan Pedro Lopez, who wore the pink jersey for 10 days, wasn’t able to match the pace on a day when the regularity of climbs ensured there would be plenty of action. The Spaniard from Trek-Segafredo dropped down the rankings from first to ninth.

The final week promises to be a showdown between the two teams that now sit at the top of the GC rankings, Ineos Grenadiers and Bora-Hansgrohe.

The Giro traditionally comes down to a battle of climbers in the final week and, with only seven seconds separating the two GC leaders, it’s going to be an intriguing contest for final victory. Carapaz holds the ace card but there’s sure to be a strong challenge from Hindley who continues to impress in the Italian Grand Tour, two years after his stunning second place.

“Jai was confident throughout the day and that had a calming effect on his team-mates,” explained Gasparotto. Bora-Hansgrohe is confident in the abilities of Hindley. It was a profile that suited the Aussie climber and beforehand his team was “convinced that we could achieve something here”.

Already a stage winner atop the Blockhaus mountain, on the day which featured the most climbing in this year’s Giro, Hindley is now in prime position to challenge for the leader’s jersey 20 years after Cadel Evans became the first Australian to wear the maglia rosa.

Since that curious Giro of 2002 Australian cycling has come of age and Hindley is leading the charge of this generation in the first Grand Tour of the season.

“Now Jai is second overall… and some of the GC favourites are already out of the running,” continued Gasparotto. “I think overall the day was almost perfect.” 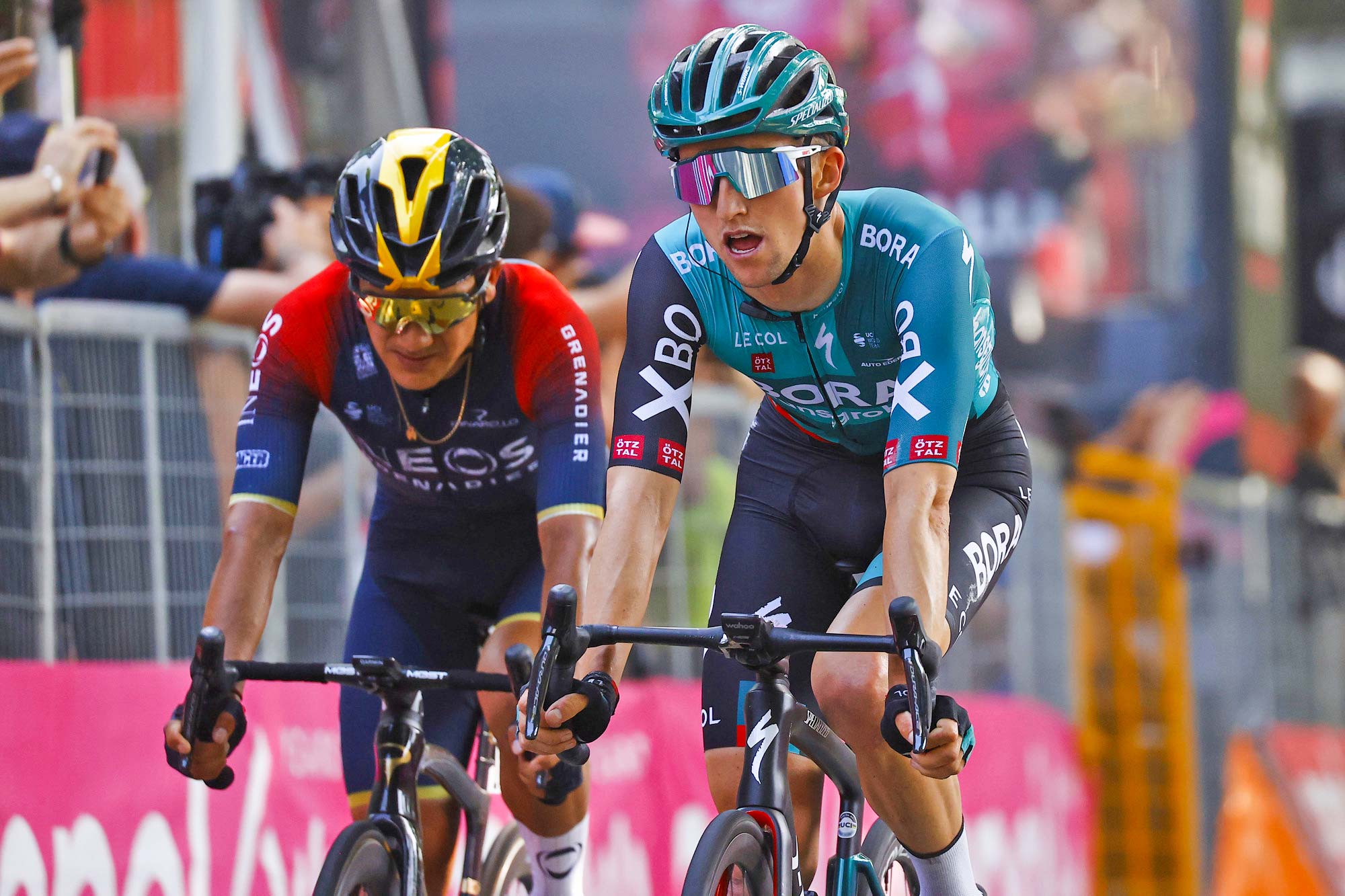 Hindley is riding on a wave of confidence. There’s another tough mountain stage to come on Sunday and although he’s disappointed not to have won in Turin, he’ll be inspired by how close he is to Carapaz after two weeks of racing.

Four men are within a minute of each other at the top of GC after 14 stages: Carapaz as the new race leader, Hindley (at 0:07), UAE Team Emirates’ GC rider for the Giro, Joao Almedia (at 0:30) and the experienced Spaniard from Bahrain-Victorious, Mikel Landa (at 0:59).

The race for the pink jersey is wide open and now it’s up to Ineos Grenadiers to defend the slim advantage held by the Giro champion from 2019.

Bora-Hansgrohe has faith in their Australian climber and Hindley appears to be the man most likely to challenge for victory.

“The team was just phenomenal today,” said Hindley in Turin. “I’m admittedly a little disappointed that I couldn’t get the win in the end, but I have to say a huge thanks to the whole team for their amazing support.

“Carapaz didn’t look overly strong at the beginning, so I was surprised when he launched his attack. I thought he went a bit too early, so I waited patiently and then I was able to catch up, along with the group. We worked well together and saved a lot of energy as a result. When we reached the first climb, I knew we were all going to go full throttle, and [Vincenzo] Nibali looked strong so I thought he might try something there… I waited for the right moment and when he took off I was able to follow.

“It was a crazy descent down to the finish and after that, I ended up taking second on the day and now in GC. I’m proud to be part of this team and thanks again to the guys for the excellent support.”

Sunday’s 177km stage features three mountain passes and an uphill finish at Cogne. Carapaz is climbing well but Hindley has been paying close attention to the Ecuadorian’s form and he’ll relish the chance to see if he can extract time from the race leader in the final week.

Carapaz may be leading but he knows that he’ll have a fight on his hands to defend the lead.

“Bora-Hansgrohe rode aggressively in a downhill and some of my team-mates got stuck behind,” said the new race leader. “Tomorrow it’ll be a very different race with much more mountains. We’ll have to defend. Compared to when I first took the maglia rosa three years ago, I have more experience and a team that supports me. The last week will be very competitive and pretty complicated.”

The Giro of 2022 is two weeks old but the race for GC is now really heating up. Australian fans will be hoping that Hindley continues to show the kind of form that has earned him a podium place in the past, and he may even start believing he can win this race.