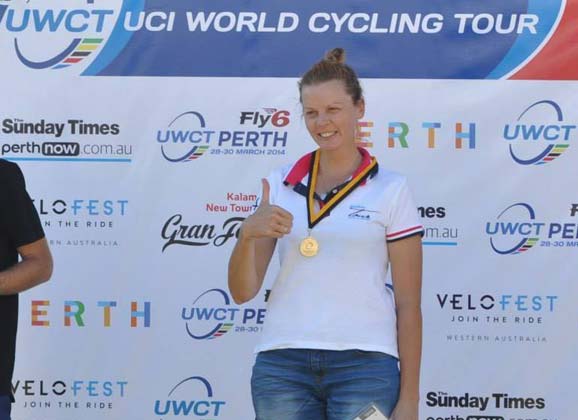 A year ago we published a feature about cycling injuries. A reader, Cathi Dixon, shared a story of a crash while riding in Europe. She arrived at hospital in Pau, France with: a broken left collarbone, a broken left scapula, broken ribs and four broken vertebrae… she had to learn to walk again and doctors doubted that she would ever get back on the bike. She did. On the weekend, she won a medal at the Tour de Perth. “Here I am getting a medal 20 months after braking my back,” she recently wrote about a very proud moment (below). “I was the only chick in my age but considering I had to learn to walk and I could only ride 500 metres on a spin bike I’m pretty happy with my effort.” 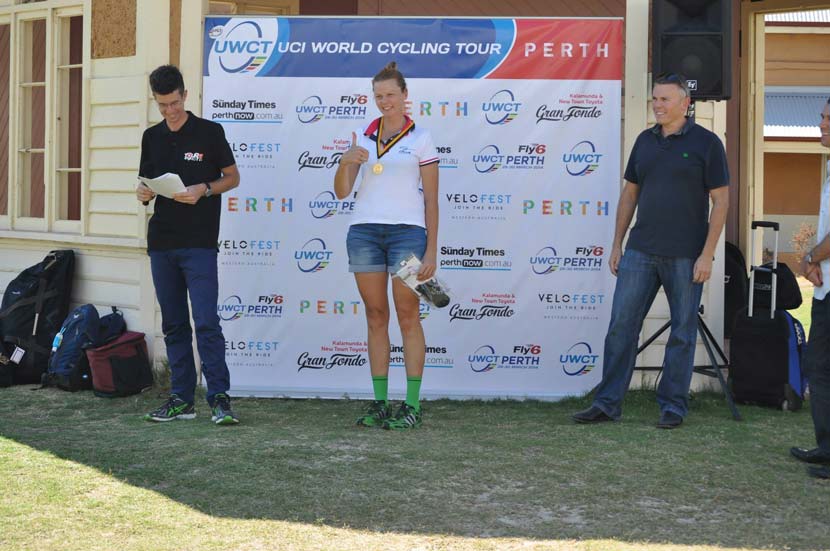 Cathi, we salute you! Congratulations on all you’ve done.

Here is the story of her accident, her injuries, and her amazing courage… (first published in RIDE #59, March 2013). 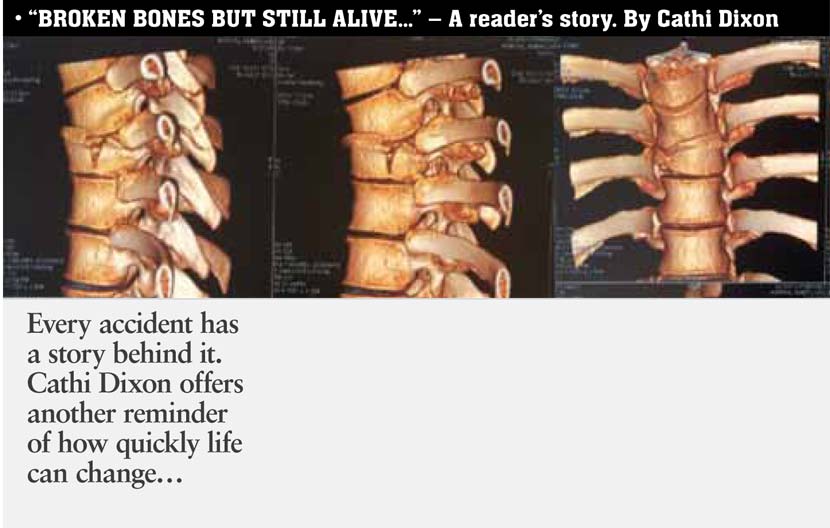 It was my first holiday overseas with my club, South Perth Rouleurs. On 15 July 2012, riding in the Pyrenees, I crashed off my hired bike. It had the brakes set up opposite to Australian standards (right = rear). I should have known better about the European brake set-up.

A couple driving up the mountain saw me come off my bike and they told my friend that my front wheel locked up and I went head first into the road.

I was airlifted to Pau hospital in the south of France. On arrival X-rays showed I had a broken left collarbone, a broken left scapula, broken ribs and four broken vertebrae. The worst was the T8 – it was almost snapped in half. I also had a head injury which was not dealt with at all.

I made the T8 worse by moving around.

A friend from Perth (Bill Darby) flew to France to bring me home; he was told by the medicos in Pau that I was fine to fly. Once he saw X-rays of my spine he got to work with the help of friends in France and in Perth to get me to a better hospital.

I was flown to the American Hospital of Paris where more X-rays were taken to show that the T8 was now in half and my spinal core was twisted and swollen. Another week had passed before things started to happen. The best thing for me at the time was to have an operation. The surgeons had to remove some of the bone in the spine to help with the swelling. My T7, T8 and T9 were fused with metal to support me.

In total I spent six weeks in France in hospital. I was flown home with a nurse and spent another two weeks at Shenton Park hospital in Perth.

I have had to learn how to walk and move again.

Six months since the crash I have started in an orthopaedic gym at a hospital. I am learning how to walk correctly. I am using equipment with no weight on it yet. It is hard work. It is painful. I have ongoing treatment and my rehabilitation is a full-time job. Doctors, physio, remedial massage, pool therapy, gym… three to four appointments per day.

I know I am lucky.

My memory is good now but I have lost recollection of July, August, September and October.

I have great cycling friends helping me pay for my rehab. South Perth Rouleurs and Midland Cycling Club are holding auctions now to help me.

One day I will return to work and even ride a bike.

I have been told this type of injury can take 12 months before a normal life can begin. My family and friends have been a great help; driving me to appointments, keeping me company, helping me with my memory.

Wearing a helmet did save my life.

If any readers are travelling overseas to ride and plan to hire a bike, make sure the brakes are set up to what you are used to. Also get an international cycling licence (which I didn’t have, I only had a national one, so I don’t get any help).

Make sure you have the best travel insurance, which I did.

All the little things like this turn into big things when you do have an accident.

My life has changed forever.

I am lucky I am alive and I can walk.

I didn’t think this would ever happen to me.