Cavendish wins again in Châteauroux – “The team of my life”

A happy Cav is a successful Cav. Win once, win again. That seems to be the way it goes in the Tour de France when Mark Cavendish is in the peloton… and racing with the Wolfpack.

At the end of the stage it was a familiar scene: Mark Cavendish in the centre of the road as he sped across the finish line with his hands on top of his helmet and with a gobsmacked expression on his face. Joy. Victory. A stage win in the Tour de France.

“That’s what people work their whole lives for,” he said at the end of the post-stage interview with Seb Piquet.

He declines the many opportunities to state if he believes the record of Tour de France stage wins [34 – held, of course, by Eddy Mercxk] is within reach. He prefers to focus on the here and now, to celebrate an accomplishment, to acknowledge the fairy tale circumstance that he’s found himself in during the twilight of a stellar career. 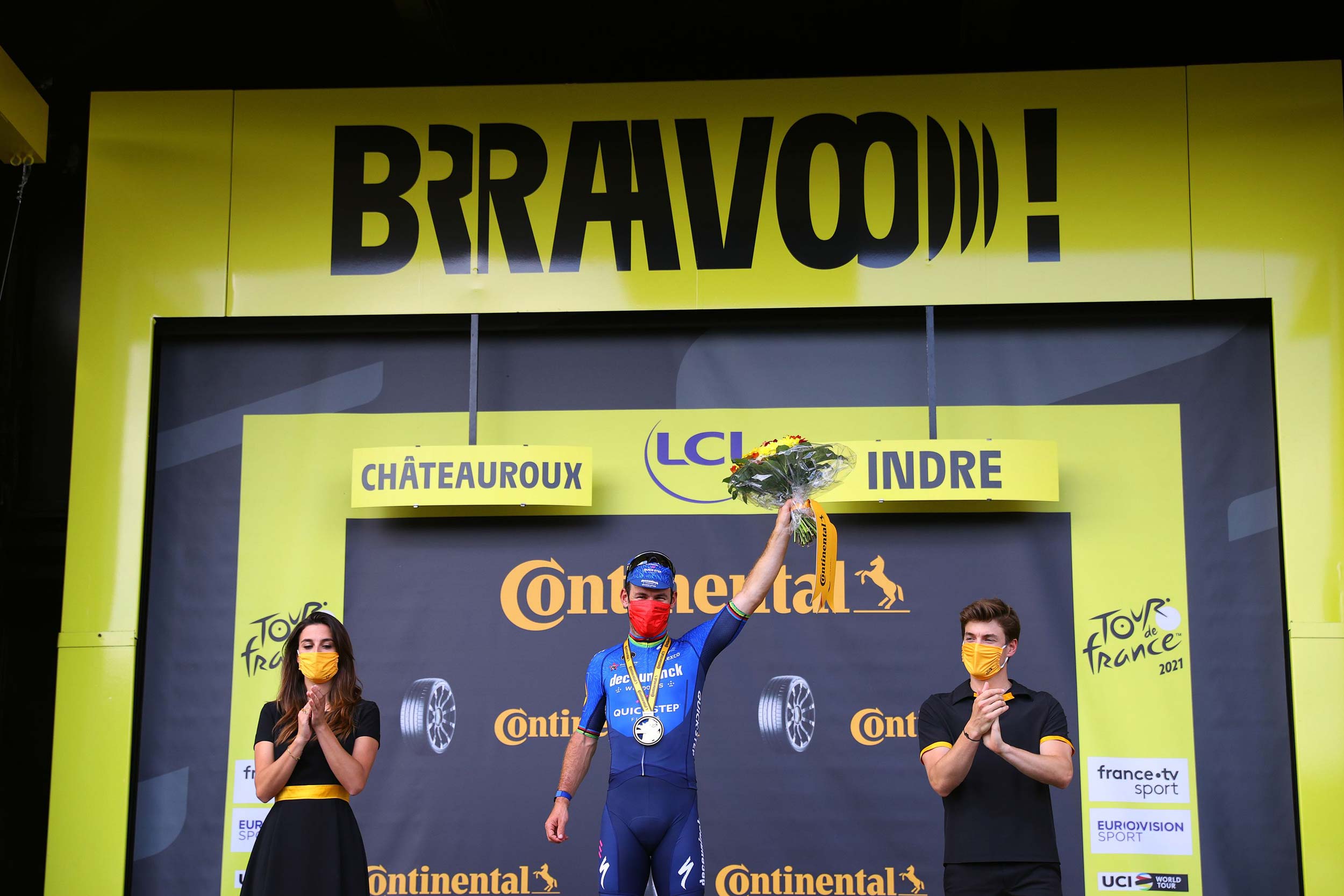 Cav’s win in stage four was something of a surprise. Actually, it was a victory very few expected in his return to the Tour after a break of a couple of years. But, with confidence high and a team of champions all working for his cause, it almost seemed inevitable that he’d win again.

Will he win another three and break Eddy’s record? Who knows. And frankly, Cav himself doesn’t really care, not right now, not when there’s already an amazing achievement to acknowledge. 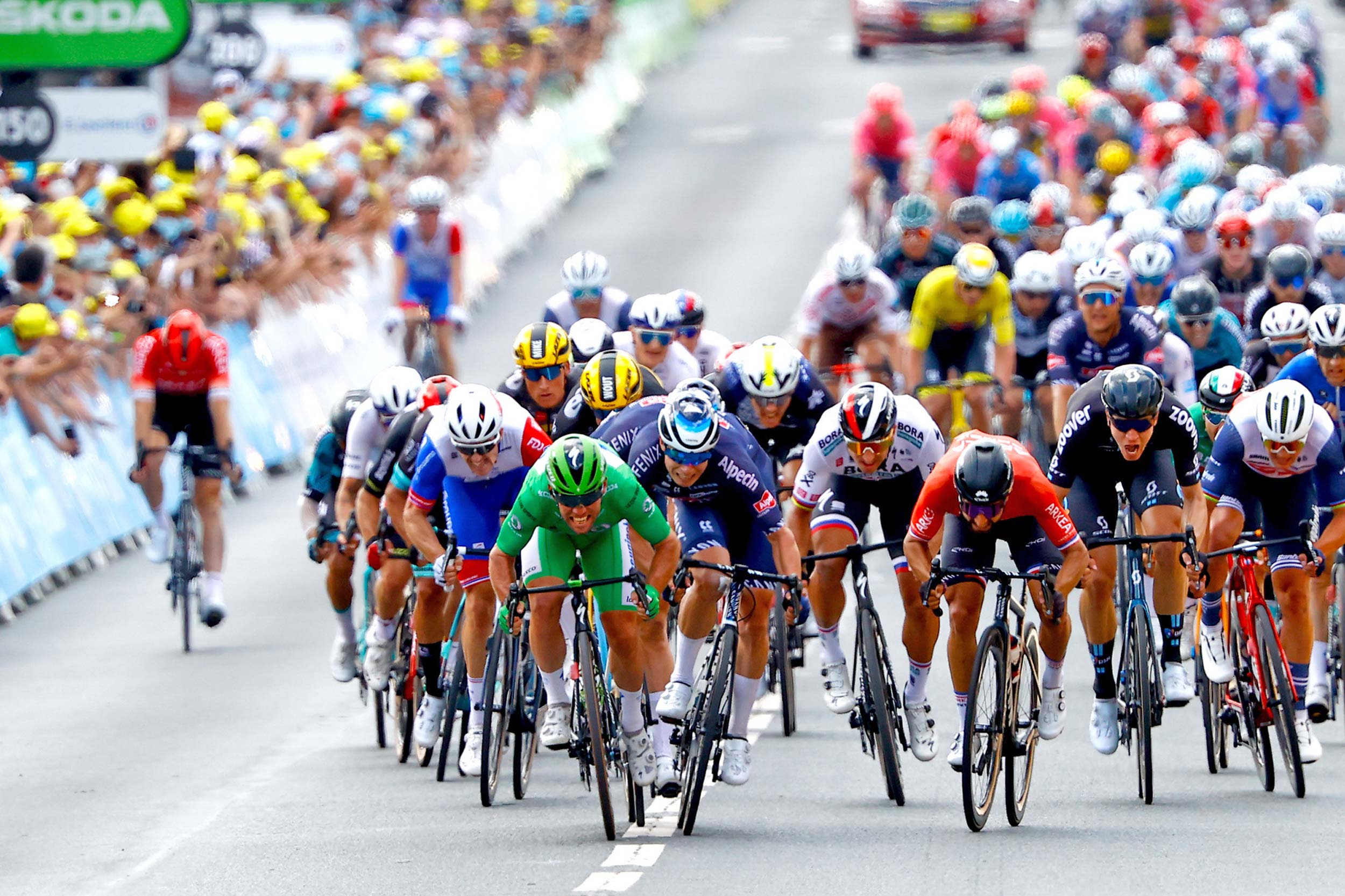 “You see how much they pull there,” he says, highlighting the support cast he’s got in the Tour that he was never meant to be part of. He’s in the TDF of 2021 and he’s seizing the opportunities that come his way. If it’s a flat stage and a sprint is likely, then Cav will put himself in the picture and make sure he’s in contention for the victory.

But it’s not a solo effort, it’s a win achieved by a pack of eight – the Wolfpack, the masters of the pursuit, the lead-out, the sprint…!

Cav shakes his head, still marvelling at what just happened and, before he even sees the replay, the images are already on rotation in his mind. He expresses his gratitude for the men who helped lead him to the 32nd Tour de France stage win of his career – and it happened in Châteauroux, the site of his first conquest back in 2008.

“The world champion, Julien Alaphilippe, just burying himself in the last kilometres,” he says beaming at the thought of the lead-out, “that’s something special.” 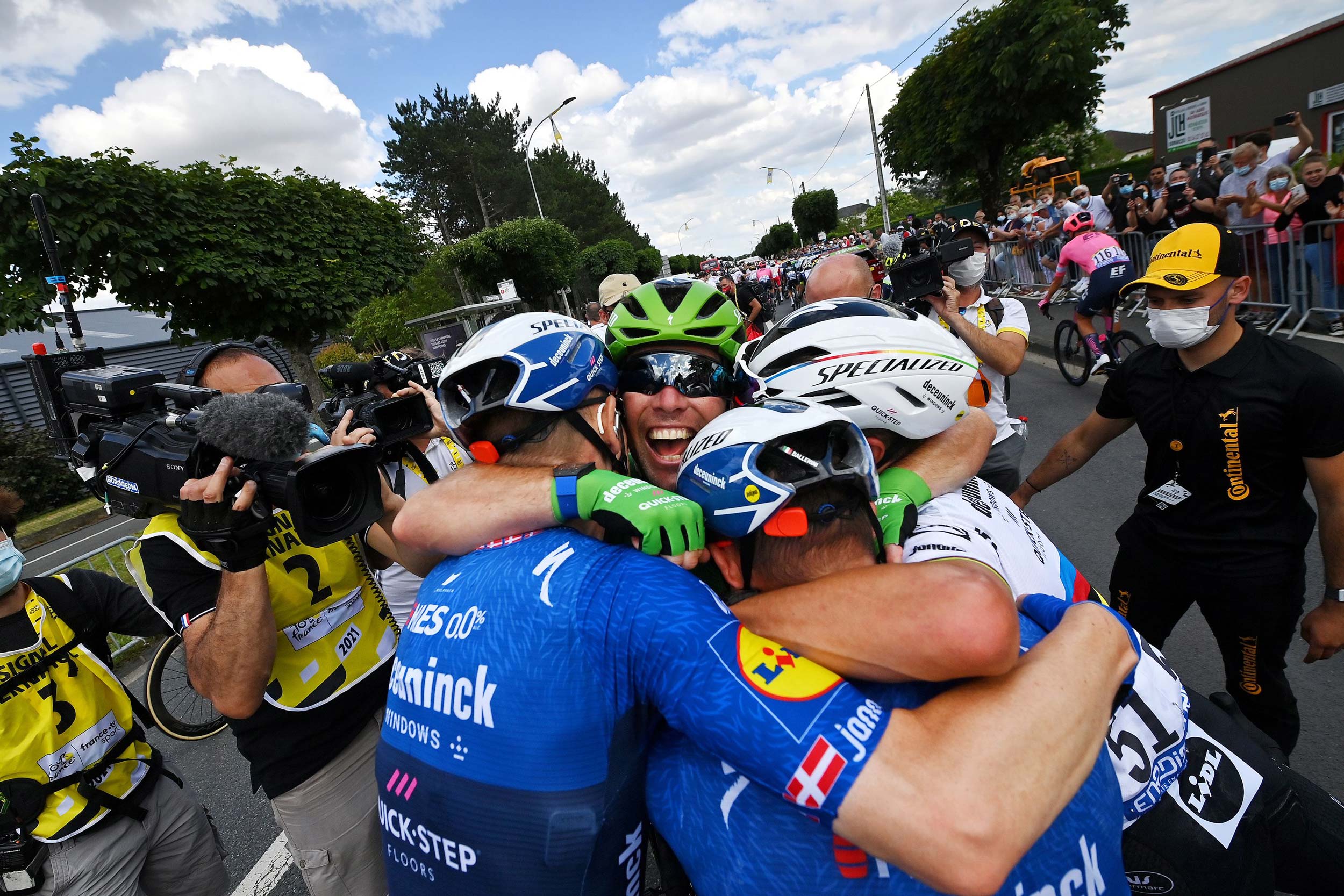 “The team of my life”

Again, we saw Mark Cavendish win a sprint stage of the Tour de France. Again, he loitered around the site of the finish, waiting to see each member of the Wolfpack and thank them for what they helped achieve. And again, he took every chance to remind the media (and himself) of the circumstances he’s found himself in.

When Tim De Clercq, the giant pacesetter from Belgium who never seems to run out of puff, arrived for his hug with Cav the pair embraced and the camera captured their exchange. “You’re in the form of your life, man,” exclaims the Belgian.

“In the team of my life,” Cav replies.

And then it’s back to the hussle and bussle of the post-stage protocols. Go here, go there… smile for a camera, get a fist-pump from a peer, relish the moment and prepare for the interviews and the podium presentation.

There’s another trophy and another green jersey to collect.

As the leader of the points classification he’s in a familiar setting. He probably never expected that he’d be doing all that again, not in 2021, but it’s happening. And he is now, surely, beginning to consider the number 35.  No, he insists, he’d rather not even talk about that, not now… not yet.

Piquet knows Cav well and he understands that questions about the stage win record irritate him, but he also knows that he needs to ask… and so he does so cautiously, trying to illicit a response without upsetting Cavendish.

“Mark,” says Piquet, “it’s your 32nd victory. You know what my next question’s going to be.” 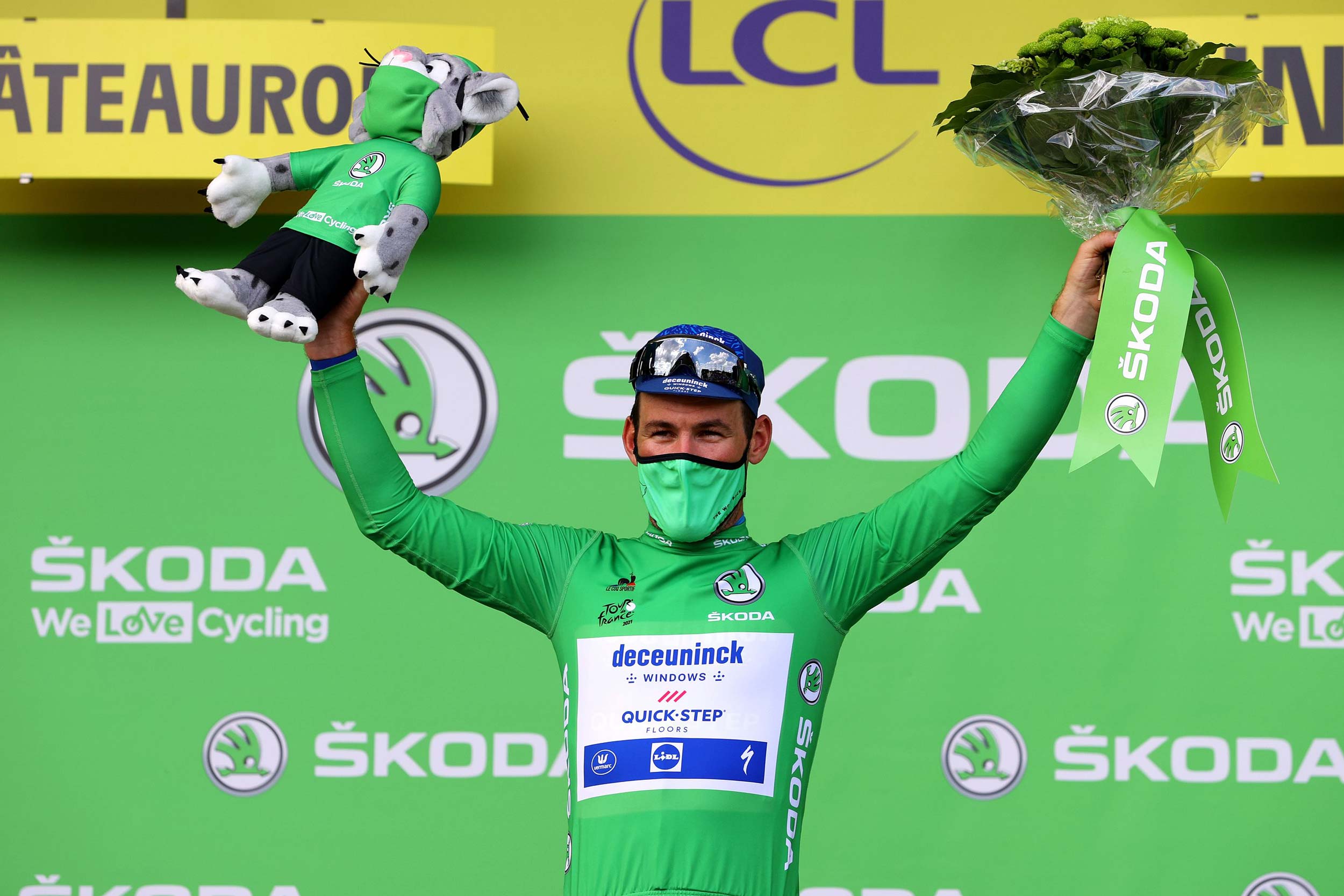 The significance of the moment is not lost on Cavendish but talking about creating history bugs him even while he’s doing exactly that. What he prefers to do in interviews is examine the race and offer his take on how it unfolded, who did what, and why it came to be that he found himself in a position to challenge for another stage win.

“It seems like every time we’ve finished here it’s been a different line,” he tells Piquet early in their exchange. “In 2008 it was uphill a bit. I think [the finish] was further down the road; 2011, it was still uphill a bit, but it was short. [This year] it’s a kinda downhill / flat run-in.

“It’s 10 years since I last won here, you know? I won in pretty similar fashion today.

“We were talking about what to do in the final because there are so many strong sprint teams here, all wanting to go to the front… but you always get swamped at the finish.”

And then he ponders how it is that other teams don’t work for the result that they are also trying to achieve. “I don’t understand why you bring a full sprint team here and not ride for a sprint,” he says, before adding an example of the lack of cohesion amongst the teams with sprinters in the mix.

“The break went… and we had Kasper [Asgreen] in there,” he explains. “A lot of the sprint teams had someone in there and all of a sudden Française des Jeux [Groupama-FDJ]… okay, they’re French teams in the Tour de France, and they panic because there’s a group going. But then, when there’s a breakaway and a chance for a sprint, they don’t pull.”

In the end, the result reflects the work of the teams involved and, again, the Wolfpack has come out on top.

The top 10 in Châteauroux includes a collection of quality sprinters, but the winner is someone who knows how to finish off the job. Would Cavendish have won if he was part of another squad? We’ll never know, but it seems unlikely. And even he admits it.

When he gets a lead-out like what the Deceuninck-Quickstep team can offer, it’s important that he finishes off the job.

Again, he speaks easily when it comes to considering the race itself as he explains the finale to Piquet, giving credit to Michael Mørkov, while almost apologising to the Danish lead-out maestro. He followed his man almost all the way to the line but then, for a brief moment switched direction and followed the Alpecin-Fenix riders before unleashing his sprint.

“Actually,” he explains, “the wind was coming from the right and Michael left the left for me to go but I wanted just a split second longer in the wheels, so I had to switch trains and go from there. But I’m so happy with that.”