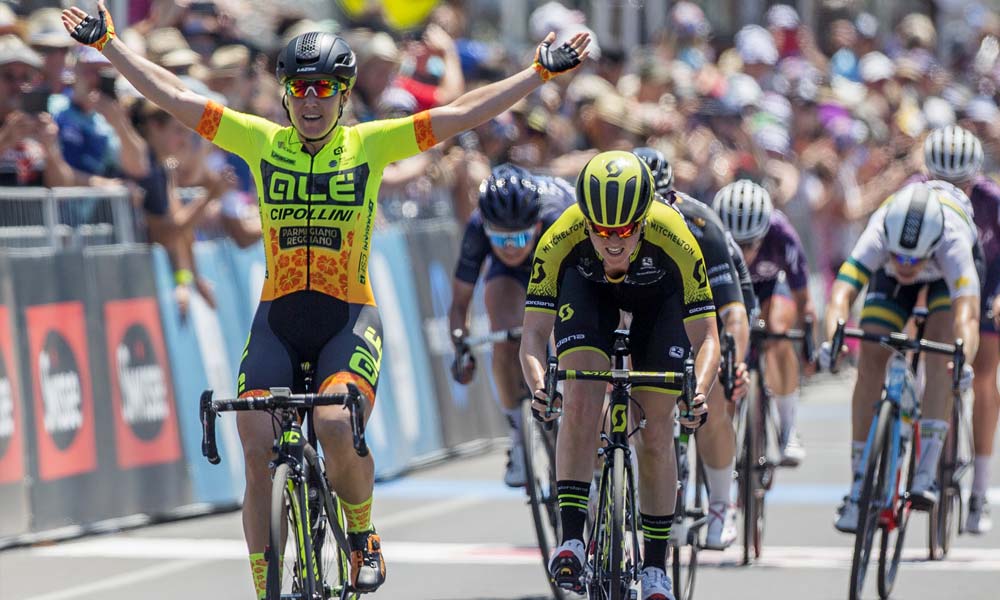 People know the name Chloe Hosking. She is outspoken and charismatic in the media. And she is strong and determined on the bike. In Geelong on a Saturday in January 2018, she got what she wanted – a win that she had targeted.

Chloe Hosking insisted that there was a point to prove. Not even her directeur sportif believed she would get over the Challambra Crescent climb and still be in contention for the win. She did. And she won the bike race.

There are a few climbs that Australian cycling fans are familiar with: Old Willunga Hill (aka. Richie Porte’s Hill), Mount Buninyong – made famous by umpteen passes on the circuit at the nationals over the years. And then there’s Challambra.

It was made famous in the world championships of 2010. It is here that big races have been determined. The actual win may take place a little further down the road, on the waterfront in Geelong – as is the case for both the Deakin University Elite Women’s Race on one Saturday of January, or the Cadel Evans Road Race on the Sunday. In 2010, it was up on Moorabool Street that victory salutes were thrown but the formula for success still requires a rider to be strong on Challambra.

Chloe was. She planned it that way. Up and over she went, in a group that could still see the true climbers of the peloton… just ‘up there’ – not too far away. Breathe. Collect yourself after the effort. Prepare yourself for the surge up what they call ‘Mount Melville’. And then it’s onward to the coast and whatever comes next. 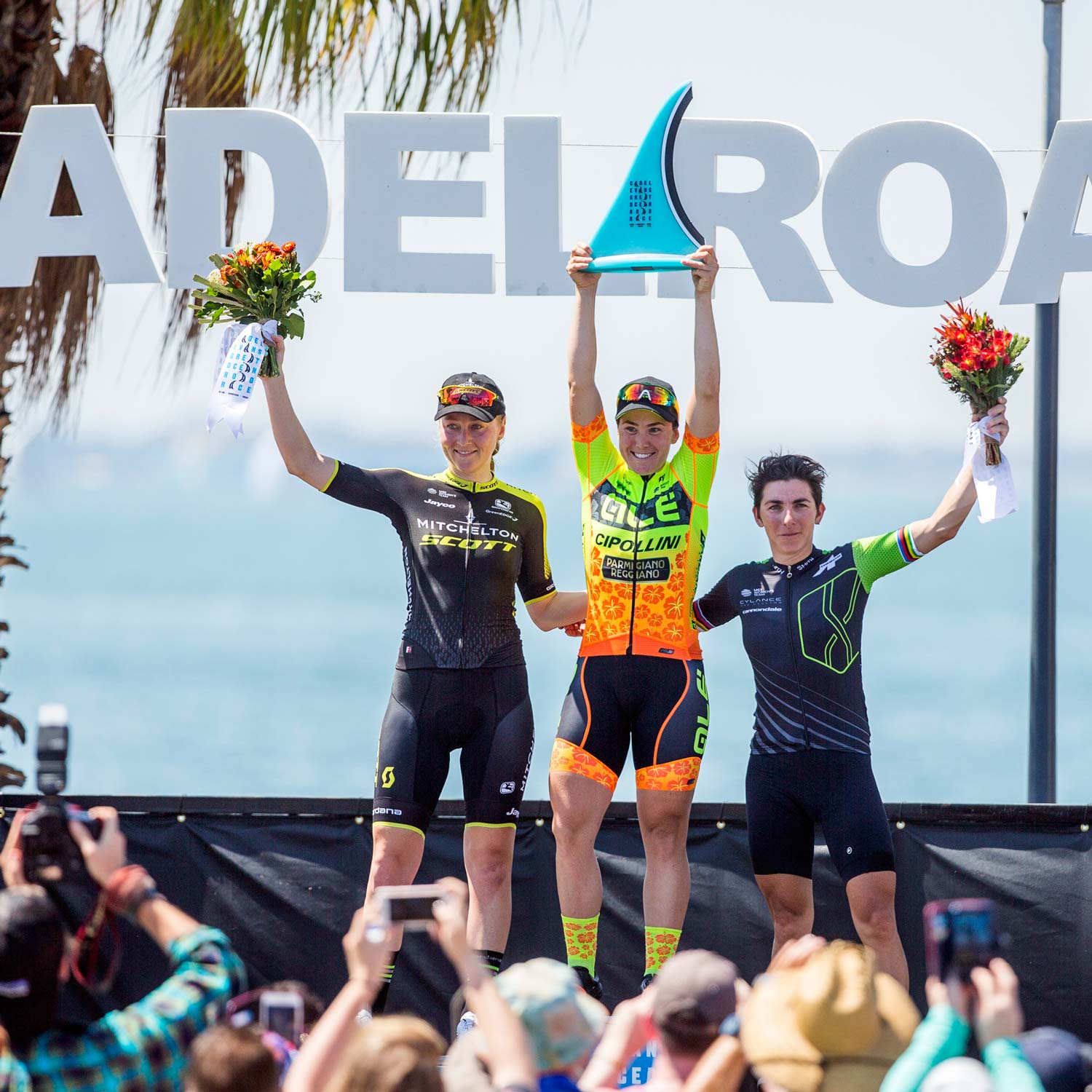 Curiously, considering who was in the lead, the bunch came back together. And when it did, that’s when Hosking proved that her preparation has been ideal.

“It’s one of my first races – if not the only race – that I’ve really targeted and delivered,” she said after spraying the bubbly over runner-up Gracie Elvin and 2010 world champion Giorgia Bronzini, who finished third today.

“That’s something that I’m criticised for all the time,” she continued.

“I didn’t deliver in Qatar (at the world championships in 2016), I didn’t deliver at the Olympics (in Rio). And it’s something that I’m trying to change. I hope this that this is a turning point for me.” 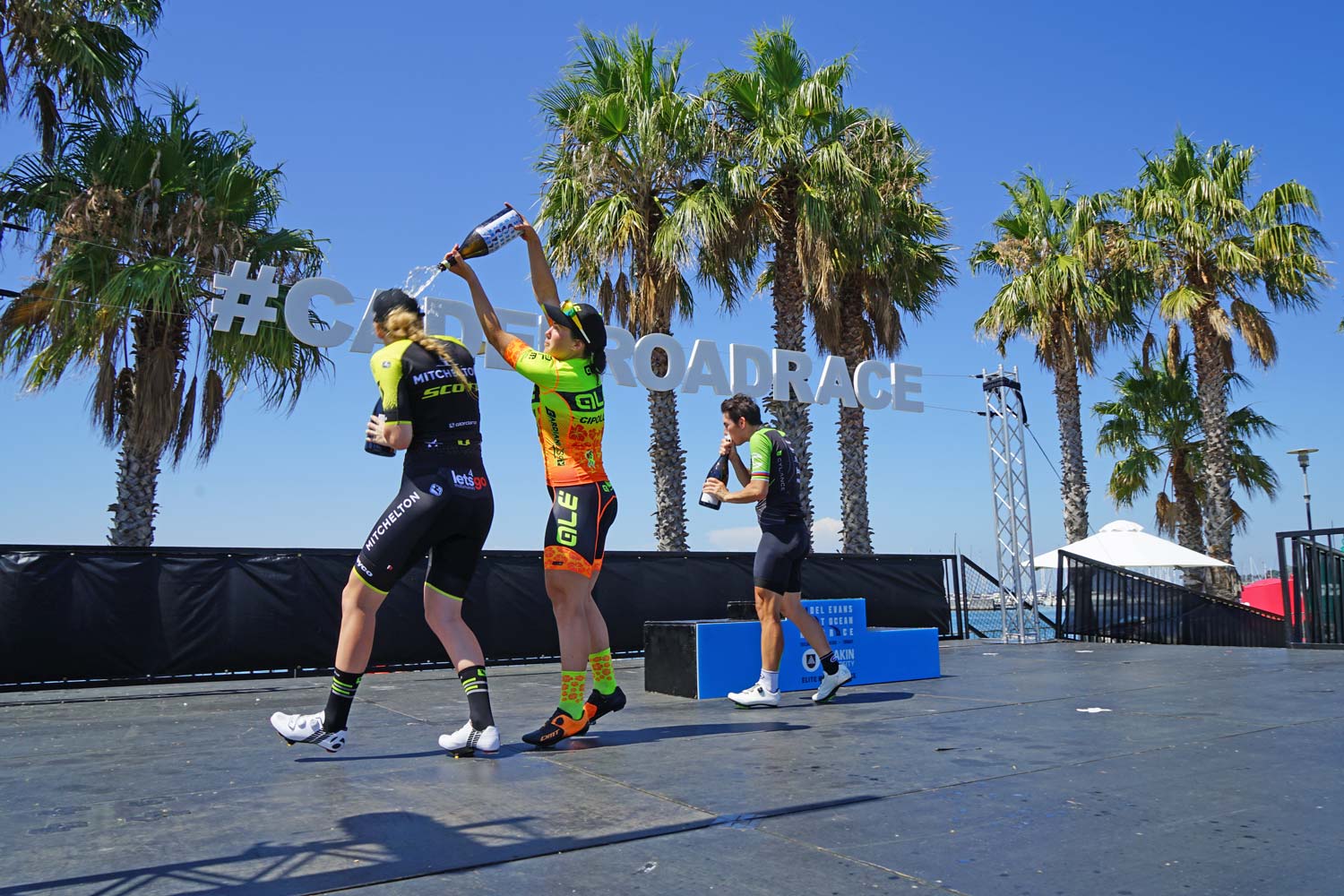 It was certainly an emphatic win. She started her sprint early and seemed to hold off Elvin, Bronzini and others in a decent sized bunch with relative ease. Of course it’s not easy. It’s damned hard to win a bike race like this in heat like this. But it’s also very satisfying when it happens…

Hosking did what she set out to do and she has reason to be proud.

It’s all part of the constant evolution of women’s cycling. On the weekend when the Australian Open features so prominently on TV screens around the nation, there is also an opportunity for sport fans to watch some cycling. It’s the third weekend in a row in January that cycling has been on the tellie. Nationals. TDU. And now the races in Geelong – women first, on the Saturday (just like in the Open), and men on the Sunday in the Cadel Evans Great Ocean Road Race. 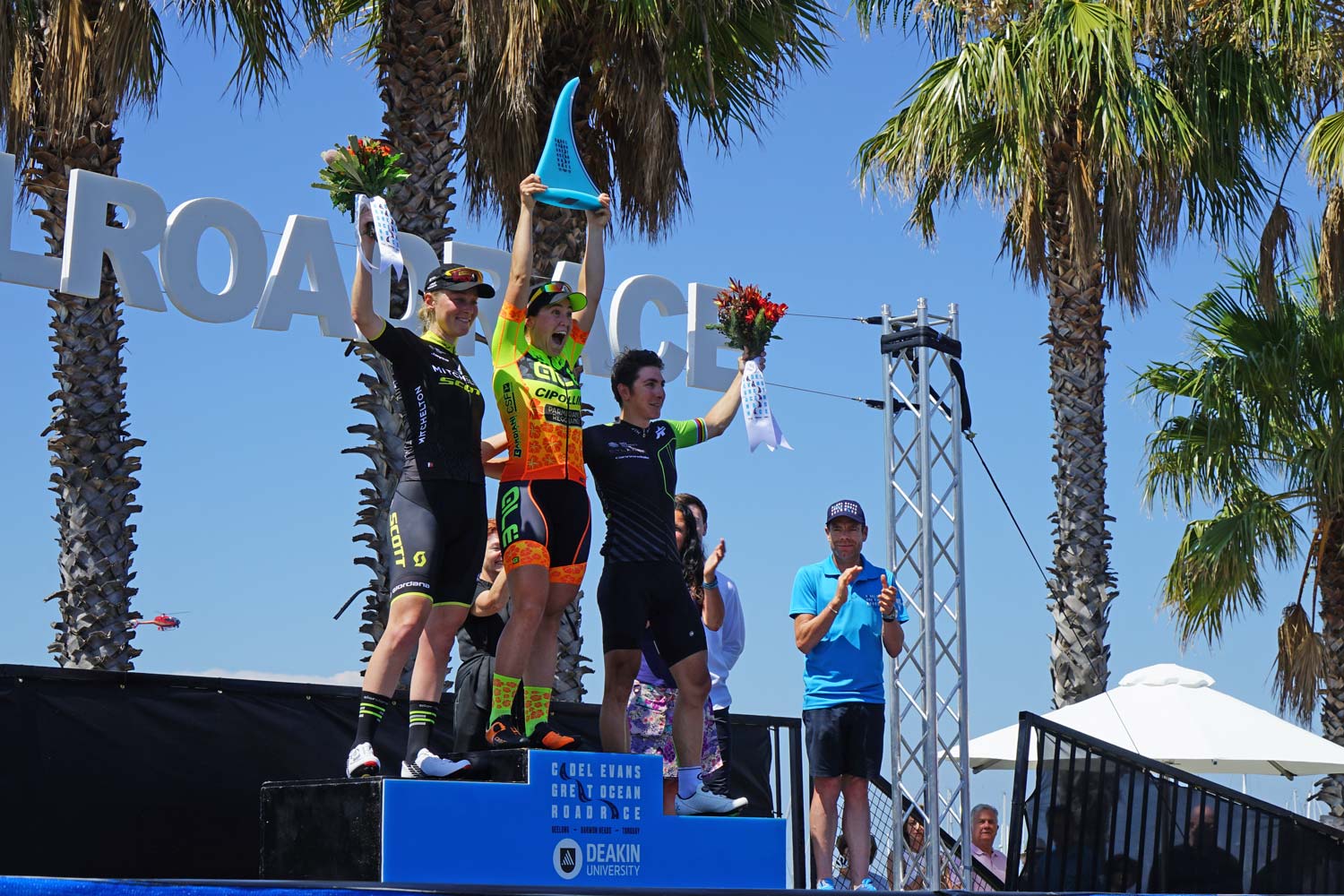 These days, Cadel is in the background on the podium…

Hosking’s accomplishment is even finer when you consider that two of the women who scampered ahead and built a slight advantage after cresting Challambra Crescent were Annemiek van Vleuten and Katrin Garfoot. Not only are the former team-mates notable climbers, they are time trial specialists and, quite simply, supreme athletes.

First and second in the TT at the worlds last September had the opportunity to work together. Over Melville they had one rider ahead of them, Sabrina Stultiens from the Waowdeals team… and there was distance between them and the bunch.

It wouldn’t matter. Hosking had a plan and she executed it with panache. 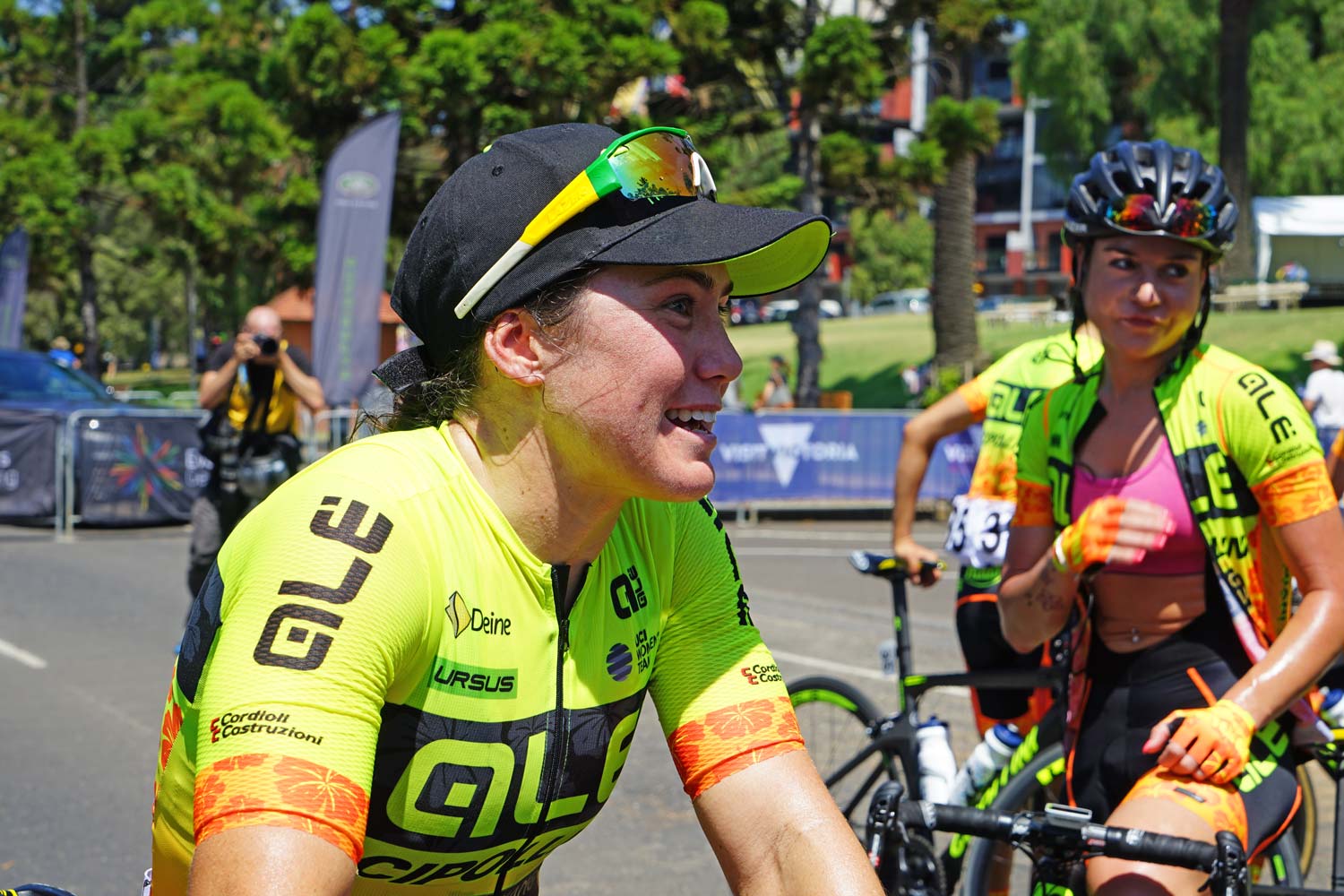 “I was surprised at how little distance they put into us,” said Hosking afterwards. She was talking about Stultiens, van Vleuten and Garfoot. But she was considering others in her group for the rest of the ride to the waterfront.

“I was sort of just pacing myself up [Challambra]. It was so hot and I was with about four girls and I could see another five just in front of me. And it kicks up really steep at the end and I know I’ve got that kick, so I sort of just punched it in the last 100 metres and got to that five in front of me.

“And then it was a bit of a waiting game.

“I didn’t have any team-mates there, so nobody to start chasing straight away. I just had to sort of hope that the other teams would start chasing. And they did.

“But I have to admit: I didn’t know how many girls were in front.

“We caught one Tibco girl on the last climb and I thought that was it. And then I heard the spectators say, ‘You know… they’re just there – 25 seconds or something!’ And I was like, ‘How many are there?!’

“And then we had that long straight road, so you could sort of see them.

“I feel like, with five kilometres to go, when you can see them, then it’s over for them.” 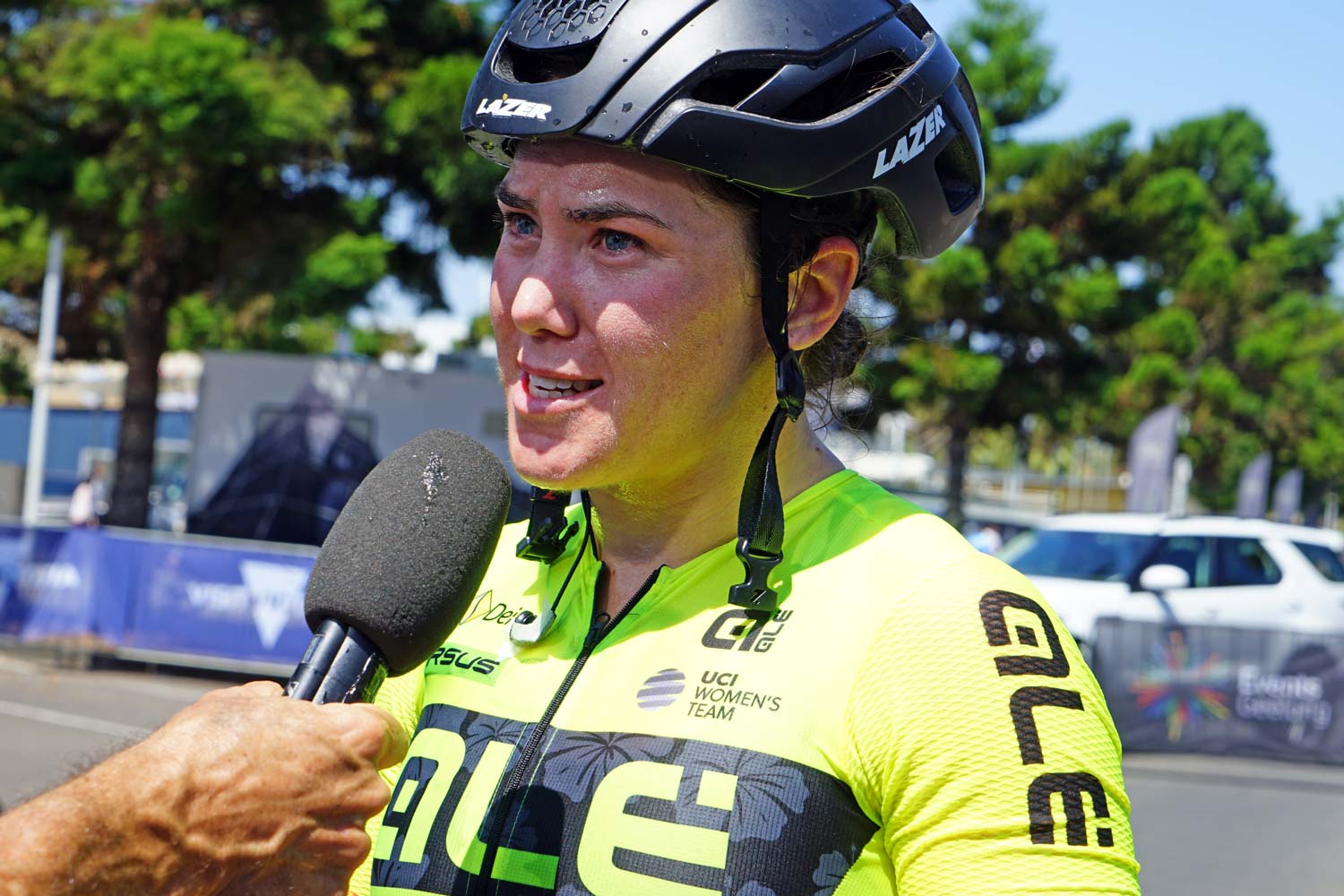 This was the first rendezvous for women on Challambra since the inception of this weekend of racing four years ago. They have raced on the Saturday since Geelong started hosting the big weekend of cycling in 2015 but the nasty climb that was such a feature of the world championships circuit was included on the itinerary for the women for the first time today (and it’ll be raced four times by the men tomorrow).

It makes for interesting racing. It lures climbers to the fore. It prompts sprinters to work harder than the years before. It provides spectators with something that they can relate to – they’ve seen it (or ridden it) and they understand the pain it can conjure. It is a steep, nasty climb that should whittle down the field and, in theory rule out the sprinters… but it doesn’t always work out that way.

It is a climb that sparks interest in the race and an understanding of the course but it was a considered approach that won on the Saturday in Geelong.

She is recognised and lauded as a sprinter but today Hosking was also a climber.