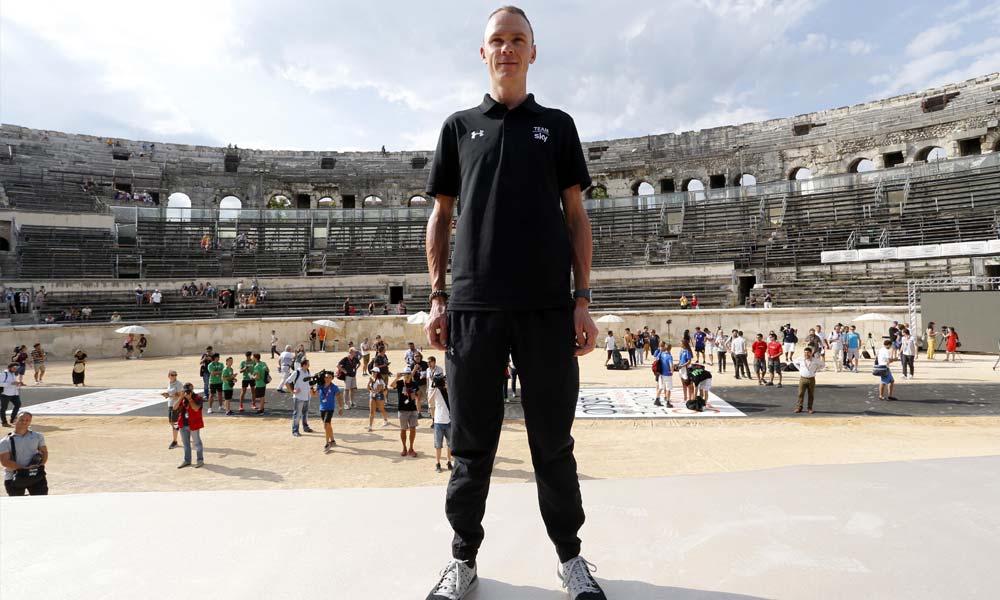 The Chris Froome conundrum: what can the UCI do?

One of cycling’s biggest stars is racing again. Yep, Chris Froome has lined up at Ruta del Sol and he’s doing as the rules allow him to do: compete while he prepares his response to an adverse analytical finding. It puts cycling in quite a predicament…

After almost five months in the position of UCI president, David Lappartient has been outspoken on a number of issues that had previously not been heavily considered by his predecessor. A crucial piece of the management puzzle – one that has the potential to strongly influence the future of pro cycling – is how to deal with Chris Froome’s ‘adverse analytical finding’ (AAF).

This challenge was never imposed on Brian Cookson. The former president faced a number of incidents during his reign, but he never had to consider what he might do if another Brit could potentially lose a Grand Tour title because of an issue with a doping product.

Lappartient came into the role and within three months news of the Vuelta a España winner being under investigation emerged.

In its official release issued on 13 December, the UCI stated: “As a matter of principle, and whilst not required by the World Anti-Doping Code, the UCI systematically reports potential anti-doping rule violations via its website when a mandatory provisional suspension applies.”

Even traces of double the limit of Salbutamol does not require the rider to stop racing, the team to suspend him, nor the UCI to take immediate action. Before any of those consequences can take place, the rider has the right to present his case. And that’s where cycling finds itself in February 2018: with a rider with an AAF competing – as is his right – while all around him is a storm of opinion.

“This is a process that a lot of other riders have gone through,” Froome said in Spain overnight, on the day he finished 57th in the opening stage of Ruta del Sol. “I don’t see why I should have different treatment to all of them.”

Some key questions about the whole ordeal include: are there any other riders competing in 2018 who have been notified of an AAF? If so, whom? And if it comes to pass that there are indeed others, why is it that only the name of one of cycling’s biggest stars has been leaked and subsequently actioned by the UCI?

An AAF is not the equivalent of a positive test. And when the news broke in December last year, the UCI did all it could to ensure that this was fully explained.

Still, the fall-out of Froome’s high levels of the asthma medication continue to haunt cycling. Once again, instead of talking about racing, most followers are discussing what should come of Froome.

Click the image above to listen to what David Lappartient had to say about Chris Froome’s AAF.

Hundreds of opinion columns have been published and scrutiny of Froome’s appearance at Ruta del Sol is immense. There is a strong media contingent in Spain – and while there’s a race going on, most are only interested in covering Froome, and how he’s managing his affair.

Almost a month earlier, on the morning of the final stage of the opening round of the UCI WorldTour, the Santos Tour Down Under, Lappartient hosted a small media gathering. It was his second visit to the race, but his first as president of the UCI. He outlined his manifesto of how cycling should be managed and then took questions from a handful of journalists.

Midway through the discussion, RIDE Media raised the topic of Chris Froome and his AAF. (You can listen to some of the exchange by clicking the SoundCloud file at the top of this page.) 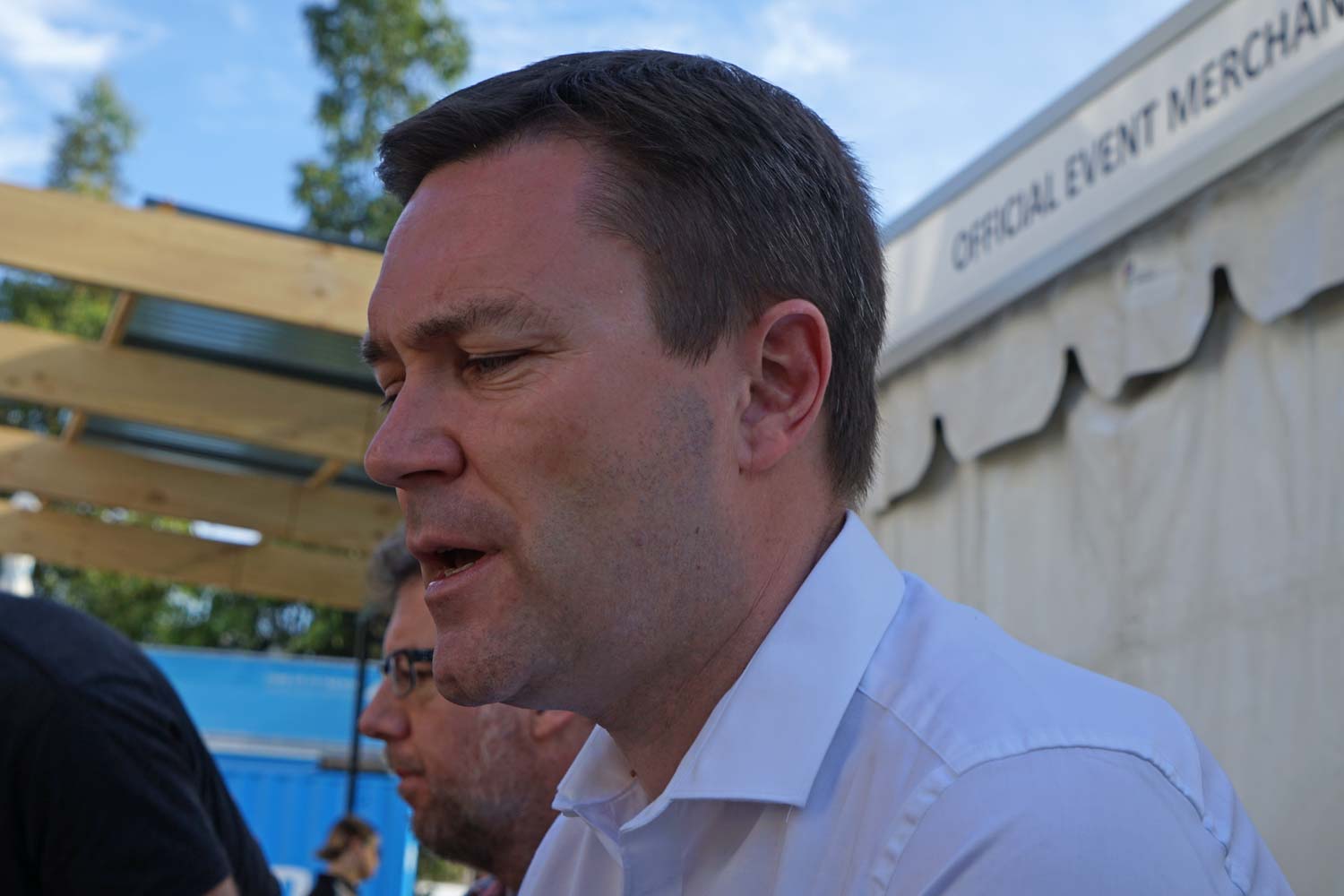 David Lappartient spoke about a range of topics while in Australia for the 20th Tour Down Under this January.

RIDE: Can we talk a little bit about Chris Froome because everyone wants to know what the solution is. Is there any way to expedite the hearing so that cycling has a clear understanding of what’s going to [happen] moving forward?

David Lappartient: “You know it’s quite a difficult case, that’s why we had a press release – two press releases – [from] the UCI. The first one, maybe not big enough, and the second one to put into details all the procedures, for everybody to understand because [it’s] sure that it’s not so easy to understand all the details.

“But, you know, Chris Froome has the right to explain his point view, to defend his situation. And this can take time, so we have to follow the procedures and I don’t want to be in a hurry and to make a mistake in the procedures.

“I’m not inside of the procedures, so I don’t know exactly how long it will take…

“I hope this can be solved as soon as possible for him, for us, for cycling. But with all the different procedures and the possibility to have an appeal and everything – I don’t know, this can be maybe one year. I hope less but it depends.

“When you have specific circumstances like Salbutamol it is a positive test but, in the meantime, he has the opportunity to explain why. It is his job to prove that it was a specific situation, with experts, and this is what he is doing now.

“I don’t know where they are with experts and how long it will take.” 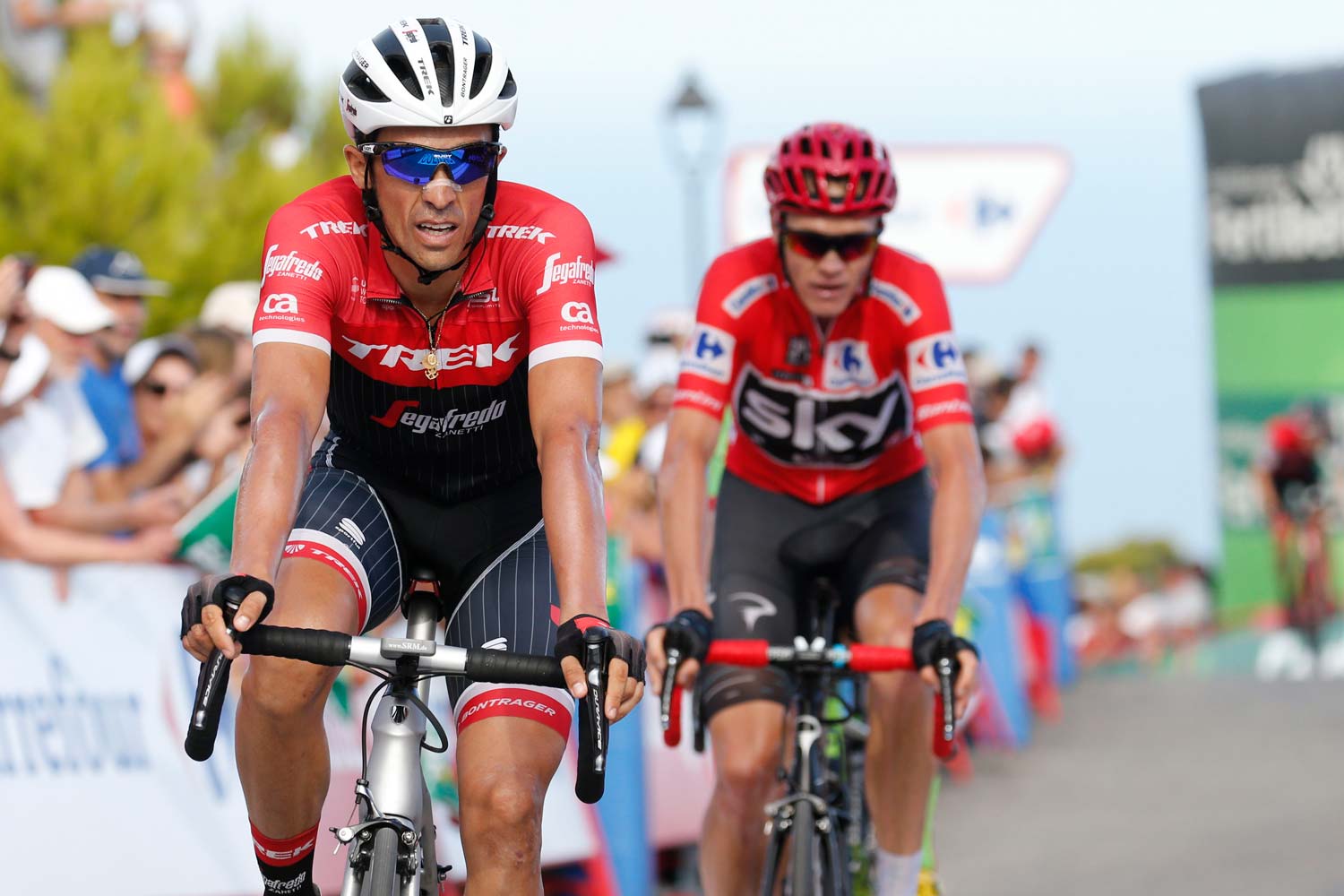 Alberto Contador and Chris Froome at the Vuelta in 2017. The Spaniard was stripped of two Grand Tour titles because of a positive test for clenbuterol; the Brit risks losing his Vuelta crown after an adverse analytical finding for Salbutamol…

And it’s possible, if there’s a sanction afterwards that [should] he win, he loses that title? That’s possible as well? “That’s possible,” replied the UCI president. “That’s happened in the past,” said Lappartient, giving a nod to the situation with Alberto Contador in 2010.

The follow-up seemed obvious but eliminating a product like this is also fraught with issues. “Do you not think it would be useful to change the rules for the use of Salbutamol?” asked the Belgian journalist. “Maybe just not allow it anymore? Is that something the UCI can do?”

Lappartient recognised the need for action but was also wary.

“[It’s] true that we must take some lessons [from] this,” said Lappartient. “For example, do we need to have – in the future – a provisional suspension for all substances? This is something that is on the table because we have [this] only for some strong substances. So, this is something that must be discussed with the WADA for the future to avoid any difficult situation like this, for the future…. It’s bad for the rider, it’s bad for us – the UCI, it’s bad for cycling, for the image of our sport.”

“With the rules,” said Lappartient when asked if Froome’s team should have withdrawn him from racing until the case is closed, “he has the right to ride.

“It’s up to them decide but if he wins some races in the [meantime] that could be bad… it could be bad for cycling, that’s why I think that it would be better for Sky, to avoid any specific problem and to decrease the pressure, to have him not ride for the moment. I think it’s better.”

Is their behaviour damaging cycling, asked Dan Benson from CyclingNews.com. “What do you think?” replied Lappartient before offering his estimation. “Of course, yes.

“When this happened, you saw [in] newspapers, on the internet, you saw all comments that cycling is [going] back to the past…

“You can imagine, this was the case in the many countries. So, of course, it’s very bad for cycling…

“But we have to be careful because there are rules.

“Froome will have the opportunity to defend his point of view and to explain that maybe it was a specific situation… however, this is bad for the image of cycling for sure.”

If RCS or ASO requested that Froome not race, asked Andy Hood from VeloNews, would that be a position the UCI would support? “Um, I think so,” said Lappartient. “I’ve said publically that I think that the best thing is – for this time, while we’re waiting for the result – the best position is not to ride.

“So, if ASO and RCS are going in the same direction, I can only agree with this.

“That’s why I hope this will be resolved as soon as possible. And if he’s not guilty, of course he will be welcome in races.” 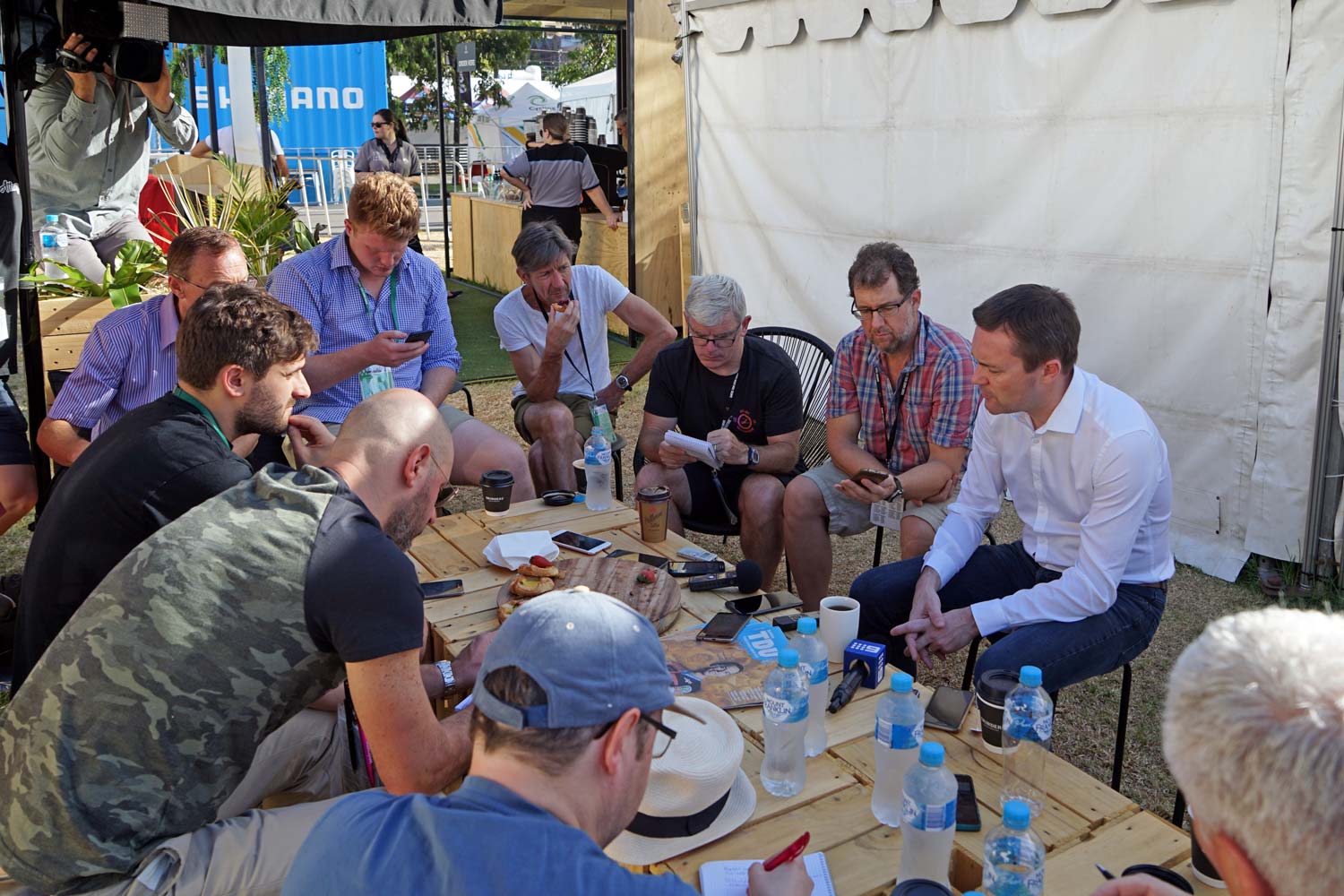 Lappartient at the media gathering in Adelaide.

There are all sorts of hypothesis being tossed around about how Froome and Team Sky are going to present their case. Word is that it won’t be long before it happens. In the meanwhile the headlines about cycling are going to hone in on a rider with an AAF hanging over his head now competing… and potentially racking up results which may later become redundant.

Froome is not the first to present an AAF for Salbutamol. It happened to Miguel Indurain during the peak of his career. It has happened to others in more recent times too. But this isn’t something that Lappartient considers to be a potential minefield, or a risk for retrospective appeals.

“Let’s say Sky presents a case which allows Chris to race again because they said ‘X, Y or Z… the test is flawed’,” I said during the Lappartient gathering in Adelaide. “What about the precedent cases of Petacchi and Ulissi and everyone else who has been suspended for similar errors?

“They recognised the situation,” replied the Frenchman. “If you take Ulissi, he had a positive case for this… a sanction was proposed and he agreed with this. Okay, he had the sanction and this was maybe different but they didn’t want to challenge, at the time, the situation.

“I think Chris Froome said publically that he respected the rules. We have to believe him but he has to prove that it’s the case.”

We wait to see what develops in the coming weeks.