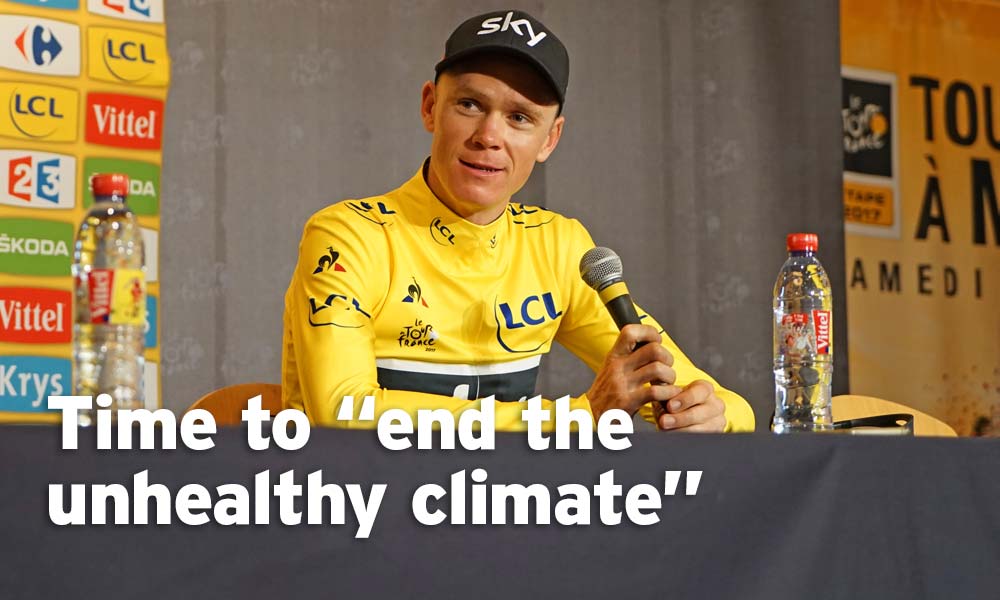 Comment on Froome at the Tour: “end the unhealthy climate”

The 20th anniversary for one of sport’s most significant doping scandals is days away. On 8 July 1998, Willy Voet’s car was stopped as he crossed the border between France and Belgium, setting off a chain of events that changed cycling forever. The soigneur for the Festina team had been caught red handed and it didn’t take long before a culture of cheating was exposed. EPO use had become rampant with athletes and teams showing little regard for an attempt to stem the flow of the miracle elixir.

EPO and other performance-enhancing products that were found in Voet’s car weren’t allowed to be used in competition, but in 1998 there wasn’t a definitive test for some of the substances. Twenty years ago, cheating was common but it would take a momentous event to ignite the change that needed to come. No Festina rider would finish the Tour that year but none of them tested positive in the 1998 race. There wasn’t even an adverse analytical finding from the race, rather it was the work of the gendarmerie that exposed the extent of the cheating… and, eventually, the actions of the race organisers that saw the team evicted.

Initially there were denials but they soon turned to confessions and, eventually, evictions from the race, suspension from later competition and even jail time for some of the people involved. Doping was considered more than just sporting fraud, it was a crime and the perpetrators needed to be punished.

At the centre of the scandal 20 years ago was the Festina team that included the runner-up from the previous Tour de France, Richard Virenque, as well as the reigning world champion, Laurent Brochard.

We know the story, understand the implications, recognise the outcomes… and, in July 2018, sit here wondering how it came to be that we approach another Tour de France not knowing if a rider implicated in a doping investigation will be forced out of the race by the event organisers.

Chris Froome’s actions are not criminal but there is an issue; he was allowed to use Salbutamol… but just not to the extent that was indicative in the sample taken at the Vuelta a España last September.

There are parallels between what became known as the Festina Affair and the situation that now exists with Chris Froome but the substances concerned are vastly different. The most relevant similarity is that, once again, it’s the ASO attempting to quell what could become an even more embarrassing situation. Meanwhile, the rider, his team, and others associated with the Froome saga maintain that they have done nothing wrong.

Michelle Froome would have us believe that she knows more about the state of play than both the president of the UCI and the Tour de France race director. “Chris will ride the Tour,” said the wife of the defending champion. At this stage it’s only a hypothesis and another example of grandstanding before any facts are presented.

Since December 2017 we’ve heard that a defence was being prepared to explain the adverse analytical finding. Numerous theories have been thrown around and there is talk about the inconsistency of tests for Salbutamol and anomalies with Froome’s samples… but the formal presentation is yet to be made public.

Festina remained in the race for the opening week of the 1998 Tour but on the second Saturday it was time for the organisers to make a decision about the team that had been plagued by the scandal. In an attempt to “end the unhealthy climate”, the race director at the time, Jean-Marie Leblanc, announced that ASO would evict the entire Festina team before the start of the time trial of stage eight.

“It seems to me that the sports ethic, the morality of the Tour, are the most important things,” said Leblanc on the morning of the TT in Corrèze on 18 July 1998.

There had been racing but the sporting aspect of the Tour was a minor sideshow to the scandal that grew from Voet’s arrest. There’s a risk of that happening again in 2018 if Chris Froome does indeed start the Tour.

His misdemeanour is nowhere near as extreme as the ones that implicated numerous riders in the peloton of the 1998 Tour but the public reaction we see in 2018 is as vocal as it is because of the scandal that became known as The Festina Affair. The public is better informed about doping now.

Bruno Roussel, the manager of the Festina team in 1998, initially denied that there was a problem. As evidence against him and his cohort grew, however, he soon changed his tune. “The objective was to improve performances under strict medical control,” said Roussel in the days between Voet’s arrest and the team’s eviction. The team’s systematic doping program had been applied “in order to avoid the unauthorised personal supply to cyclists causing grave attacks on their health which could have been the case in the past”.

Many other riders from a range of other teams would eventually be implicated in doping because of the arrest of Voet and the subsequent fall-out. And cycling would be forced into cleaning up what was a festering mess.

As a result, cycling – and sport in general – is in a much healthier state in 2018 than what it was 20 years ago. From an administrative standpoint, however, there remains confusion about how to manage another doping debacle. It makes sense that the ASO is doing what it can in advance of the Tour de France to negate an embarrassing situation.

Doping would not come to a grinding halt because of a series of arrests, trials and convictions for sporting fraud in 1998. The flagrant sins of the past have not been repeated by Froome but once again there has come a need for the ASO to make a stand.

The Tour de France has been so heavily affected by doping problems that it introduced a clause that allows to reject a rider (or team) that could risk damaging the race’s reputation. Overnight it was reported in Le Monde that ASO is exercising this right.

The Tour is meant to be a showcase of cycling, a festival with sport at the core. There will be a race and there are going to be winners and losers. We wait to see what comes of Team Sky’s appeal of the reported sanction by ASO and recognise that there is not a simple solution to a complex problem.

It took seven days for the ASO to make the decision to evict Festina from the Tour in 1998. It has taken seven months for the organisers to make a stand against Chris Froome in 2018… ideally, the decision would have been made by the relevant antidoping authorities (or the team itself) – and it may well turn out that way – but time has run out to clear the air before the Tour. So, once again the ASO has been forced to take the lead and “end the unhealthy climate”.

Team Sky has had plenty of time to present its case explaining the excessive traces of Salbutamol but there is now a greater sense of urgency to conclude this saga. Michelle Froome may be correct but, as the race director in 2018, Christian Prudhomme has said recently, “It is terrible that the sporting authorities have not managed to solve this problem before the start of the world’s biggest race. I won’t say anything more but, of course, rules have to be modified.”