It’s never too early to plan a cycling holiday. Vaughan McVilly explains a trip from earlier this year, while already thinking about a return to Italy next May. Here is an overview of his experience in ‘Terrabici’, Emilia Romagna.

Emilia Romagna is a holiday region in the north east of Italy. The airport is in Bologna in the centre of the region and last May I based myself from Cattolica by the Adriatic Sea for a week of cycling.

The town and surrounding areas are home to some of my favourite things. For starters, Marco Pantani trained here. Emilia Romagna is where he was born (in Cesena) and where he tragically passed away (in Rimini). ‘Il Pirata’ was famous for saying he didn’t need to go anywhere else to train as everything he needed was in his backyard. Valentino Rossi has his house nearby. And who doesn’t love the great ham from Parma and amazing fresh seafood from the Adriatic? 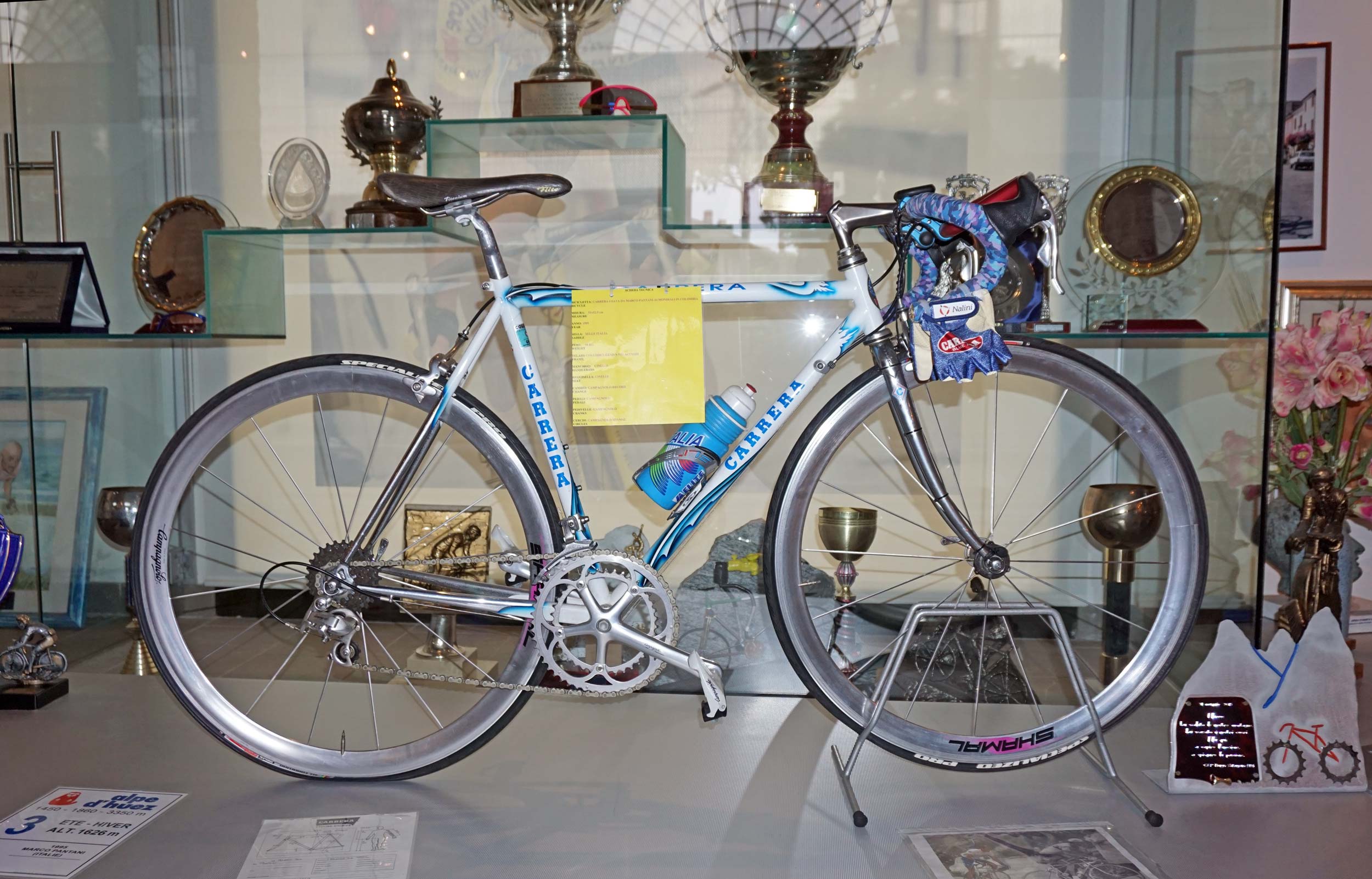 Some of the bikes of Marco Pantani, proudly on display in Emilia Romagna. (Photos: RIDE Media) 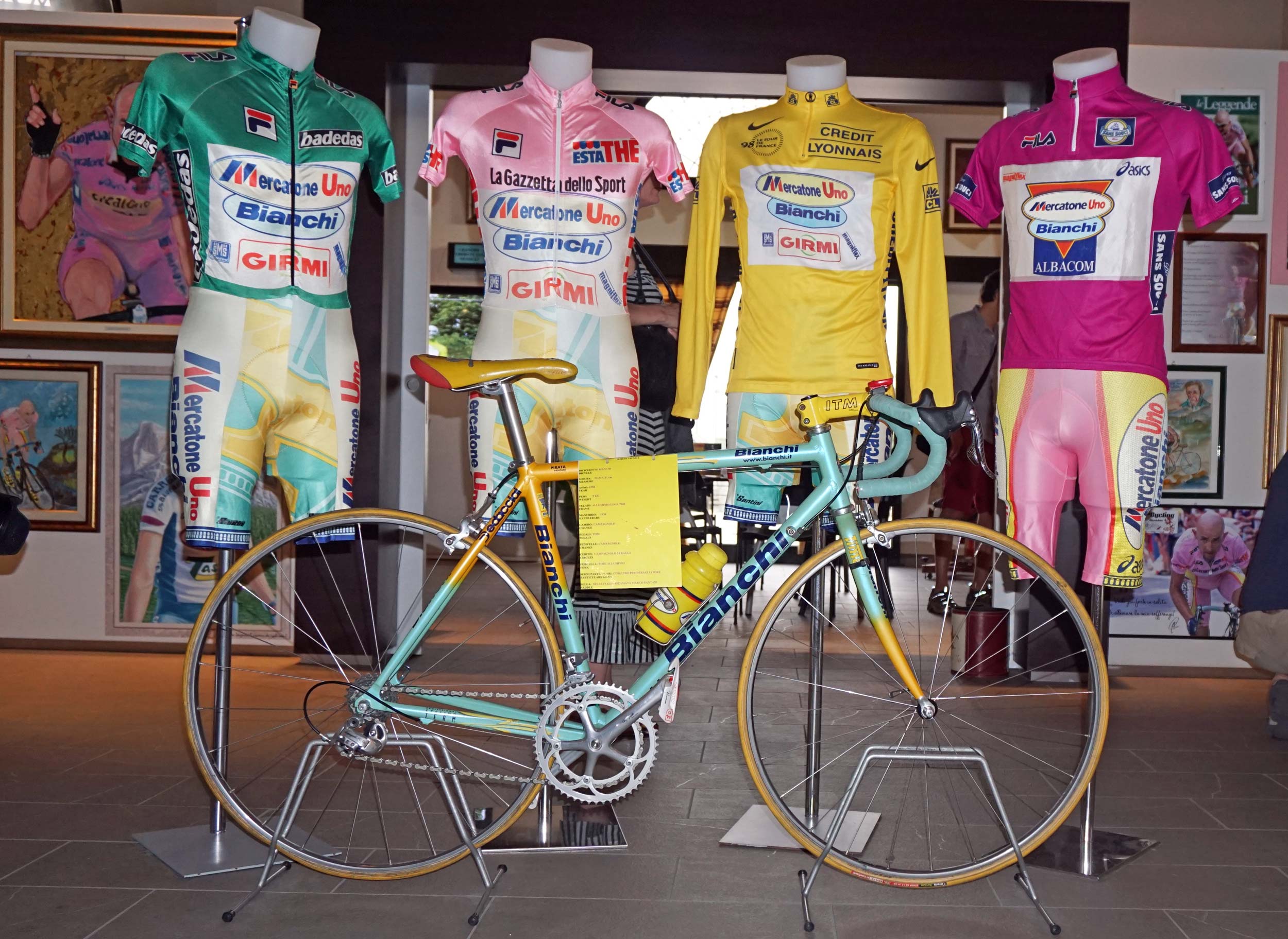 Before I even boarded the plane bound to Italy from Sydney I knew this was going to be a magic adventure, here’s my story about riding in an Italian cycling paradise.

The 2019 Giro d’Italia passed through the area on stage nine in 2019, for a time trial up to San Marino on a course I rode a week before the pros arrived and raced it.

If you have ever been to Italy during the month of May you’ll know the entire country comes alive for the Giro. The atmosphere, the hospitality, the energy, the pink… it’s electric, it’s accessible, and it’s got a magnetic attraction. 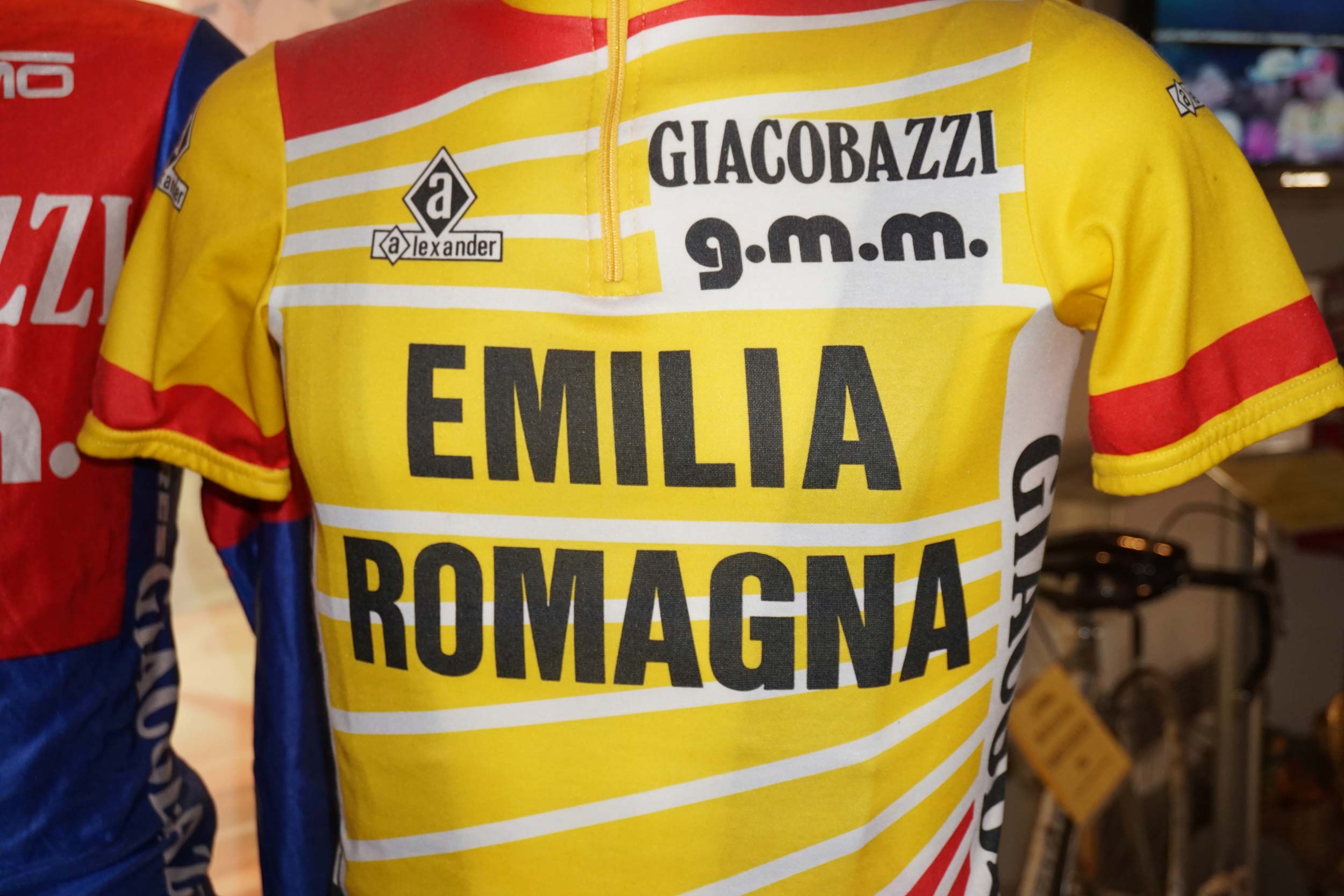 After a 47-hour trip to Bologna, filled with typical unexpected travel curveballs, I eventually arrived at Hotel Europa Monetti to meet half of the group that I would be riding with for a late dinner. The WhatsApp messages issued days earlier meant that everyone I was about to meet already knew the basics of my story – and my history with cycling. And so, as soon as I arrived I was wrapped up in true Italian love, passion and hospitality with, I should add, a liberal side serving of German affection.

Alberto and Sonja from the Europa Monetti Bike and Sports Hotel literally wrapped me up. There were hugs and greetings that made me feel not only welcome but as though I’d returned to familiar surrounds… even though it was my first visit. They treated me to the first of many delicious Italian meals for the trip and, I’d later learn, the chef had waited for my arrival – as had the other guests – before we began the feast. And the punchline? It was past 11.00pm but they never complained.

With the formalities over, we all sat down and enjoyed an amazing introduction to Adriatic seafood delicacies.

My immediate connection with Alberto may have been a little disturbing for his gorgeous partner Sonja but it wasn’t long until they both felt like family. Andrea, who had organised the trip, and Patrick a journalist from Germany also made me feel that I had arrived to a second home. 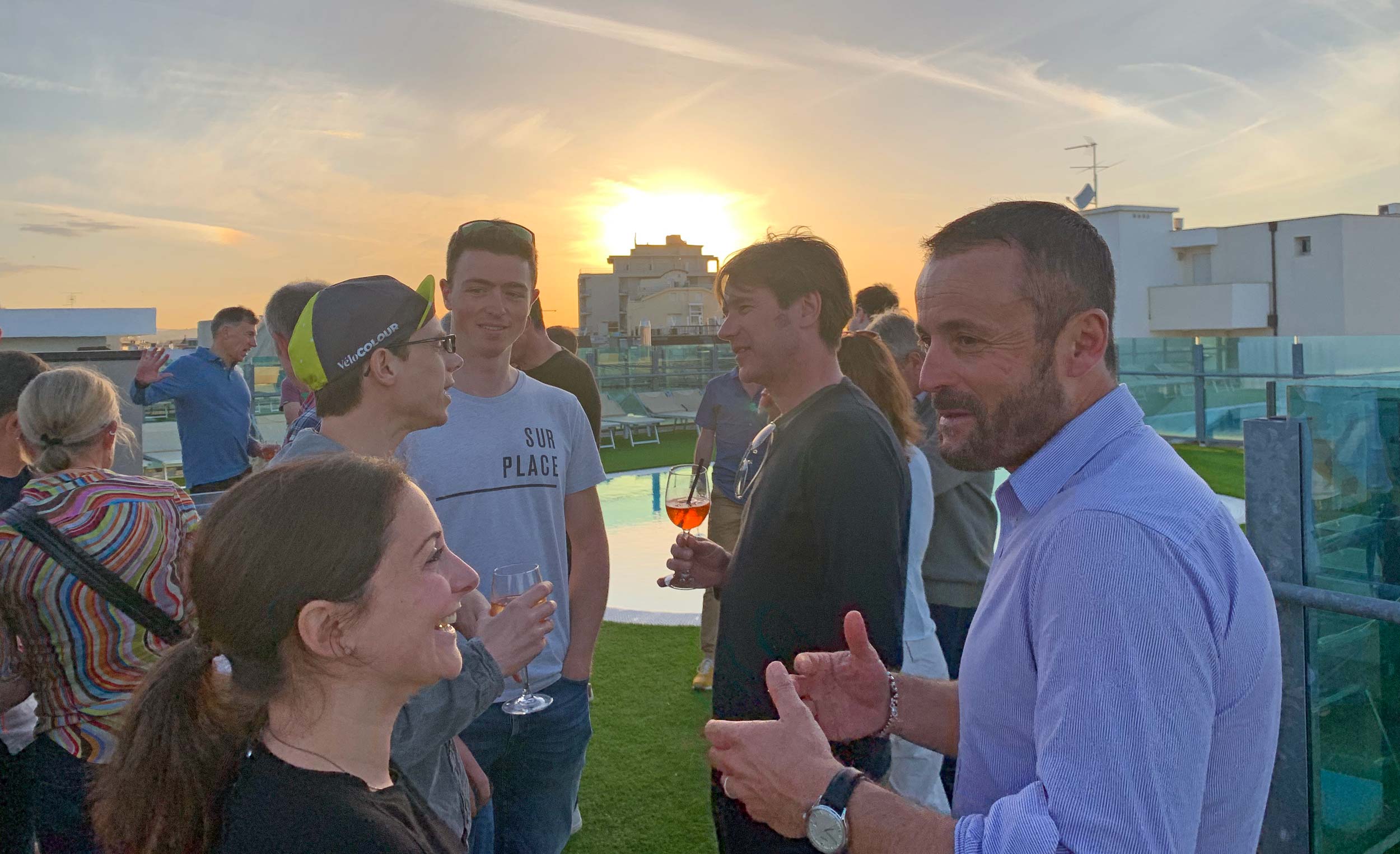 Settling in before riding

One of the most refreshing things that I learnt on this trip was the community of hotels and service providers that cater specifically to the idea of cycling tourism. There’s no narrowminded, greedy, tall poppy narcissism, behaviour that I have become used to back in Australia.

Rather, in Emilia Romagna, a range of businesses have banded together with the local council/government to form ‘Terrabici – Land of Cycling’. Individually they have all built their own infrastructure for cyclists, together they offer the most extensive range of bike love I have ever witnessed.

I was moved to tears with the realisation of their co-operation and love for each other’s success. 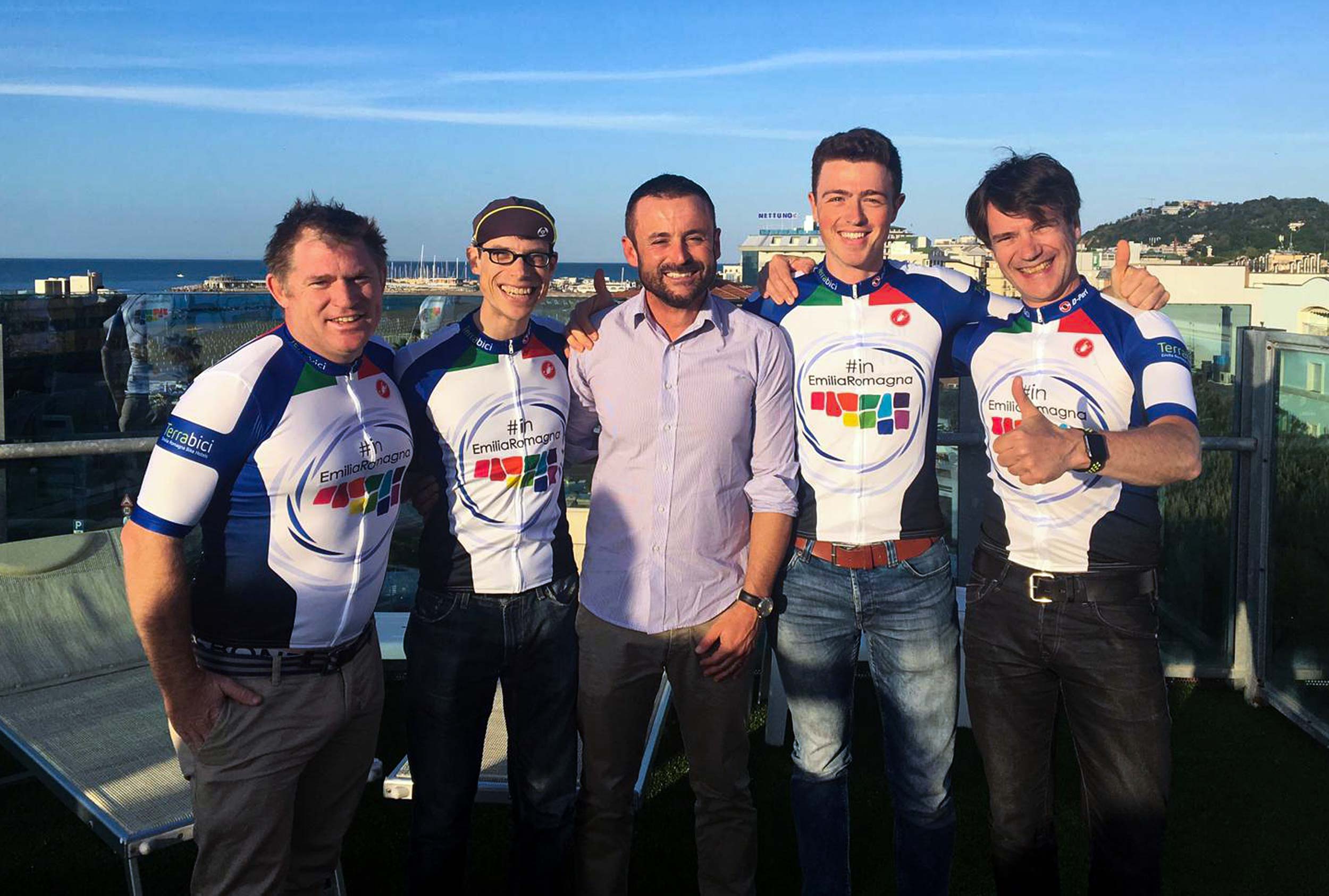 Every cycling adventure has its cast and my trip to Italy earlier this year introduced me to a range of characters with a common love. Bike riding is what brought us Terrabici and although we were an eclectic group from various corners of the world, it became more than just another training bunch.

Italy and cycling, what a great combination to make friends.

Here is a brief introduction to the crew I was riding with in Emilia Romagna:

‘CanGerBelOz!’ That’s the name that manifested itself once four cycling fanatics from across the globe got together.

It would be fair to say we blended like ice, Aperol, Prosecco, soda and big ol’ slice of Italian blood orange.

The German and I met at Europa Monetti – which has the additional tagline of ‘Lifestyle Hotel’ – to take on the pristine rolling road of Panoramica.

We soon met up with the a group of three Swiss lads and some other guys from Craft clothing.

Alberto strolled out the front of the hotel to meet us and introduce us to our guide for the day. Alberto is a suave Italian fox. I had a man crush! I’m not sure it was mutual. Our tour guide, I’m sure, was looking at me, a tubby Australian, thinking this might be a long day!

He had a big infectious smile and looked at the athletic-looking Swiss trio and I could tell he was thinking: ‘There might be some big splits in the bunch today…’ Still, I had 47 hours of sitting on my arse inside the fart tube that delivered me from the other side of the world, and I wanted to pummel any further risk of DVT out of my system. I may have looked ill-prepared after a cursory glance from Alberto, but he’d soon learn that I was ready for some leg-snappin good times!

The ride first took us past the home of Luciano Pavarotti and then through the hinterland to Pesaro, where we hit the Adriatic coastline. Then we switched direction and headed up the day’s major climb, a steady cat-3, with an average gradient of 5% for just over 3km.

The group split into three groups with the Swiss guys leading the way.

I sat second wheel behind a tall Swiss lad as he danced on the pedals. The road wound back and forth, lined with pencil pines and manicured box hedges. A number of switchbacks weren’t too steep and I felt comfortable climbing through the sunshine.

I was really zinging as we crested the top. This is the Strada Panoramic Adriatica and it is up there with one of the best stretches of cycling asphalt on the planet.

The views are jaw dropping and the way the road flows along the clipped coast line is yeeeoooouuw fun! Big chain-ring, power over short inclines, and then drive it hard and fast down short declines. Short recovery. Rinse. Repeat.

Passing stunning wine landscapes to the left and the ocean to the right, I could ride that road every day of my life and, I’m sure, never get sick of it!

We arrived at our lunch stop at Fiorenzuola di Focara in the regional nature park of San Bartolo. Our lunch spot was a little roadside cafeteria. It was nothing special to look at, in contrast to the glorious views and stunning seaside we had been treated to, however it was packing one hell of a gastronomic surprise. Being so close to the sea-side the daily specials were fresh mussels in a tomato broth and a pesci spaghetti vongule.

“Grattare la tua scarpa” loosely translated means to ‘scrape your shoe’ but here it meant to use the bread to sop up every last drop of the sauce. Yum!

That night we were to have our formal welcome on the rooftop of Hotel San Marco. This is where I first met the Canadian and the Belgie.

The night was hosted by Andrea and a few tasty Aperol Spritzs were well received!

Andrea laid out the next few days for us and then handed out the goodie bag. A musette full of everything from a battery pack for our phones to towels, wet weather bags and of course an Emilia Romagna jersey. We were feeling spoilt already and this was only day one.

A buffet dinner followed by some drinks with my new family Alberto and Sonja at a bar ended the night in bliss. 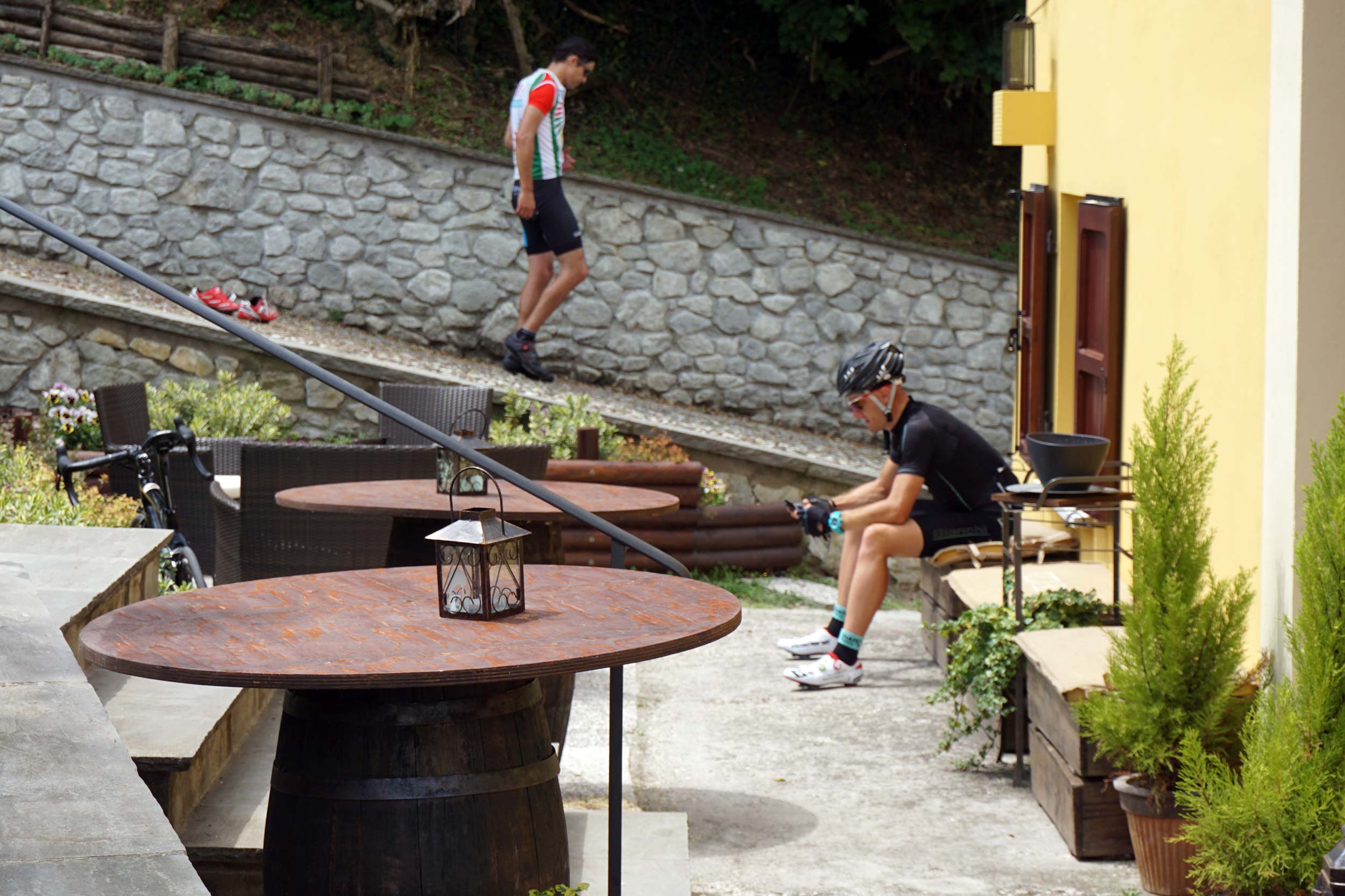 We woke early and headed down for great coffee and a massive breakfast. The small parma, tomato and mayo micro-buns were so delicious, I may have wrapped one up in foil and whacked it in my jersey pocket. #buffetthief

Our ride on the second day was up to San Marino. We would follow the route used for the Giro d’Italia’s stage nine time trial and we were also pairing up with the Eat Sleep Cycle group and another collective of British cyclists called London Dynamo.

Having larger groups meant sitting in was a lot easier but also a bit sketchier.

The Poms, for the most part, were all very good riders but, like any bunch ride, it only takes a few to make the experience a bit unnerving. That said, by the time we got into the day’s major climb the groups had already split up and it was easy to pick a rhythm and enjoy the scenery.

I rode most of the climb with Andrea, getting an insight to the area and just enjoying a steady pace up the cat-2 climb.

The final kilometre had a number of 15% ramps. I took my time and then toyed with the kookie Canadian, Matty. Attacking on the steepest section with a cheeky smile (but true intent, of course)… only for the lightweight whipper snapper from Toronto to just casually roll up alongside me without even breaking a sweat and grinning like a Cheshire cat.

When we arrived at the top the Belgie, Robin, was on his third coffee!

The following days were more of the same and also included the Gran Fondo Squali which you can read about in my next story: amazing riding and amazing people!

For the final dinner we were taken to yet another bike hotel on the Adriatic coast where we were spoilt rotten with food, wine and Italian love!

Where are you going to go for your next holiday?

Even if you have been to Italy already, if you haven’t visited the Emilia Romania region then put this at the top of your list. I have ridden throughout Europe, in Asia, and all over Australia and when it comes to riding bikes, eating and drinking while surrounded by amazing scenery and enjoying fabulous service then this place is a must visit.