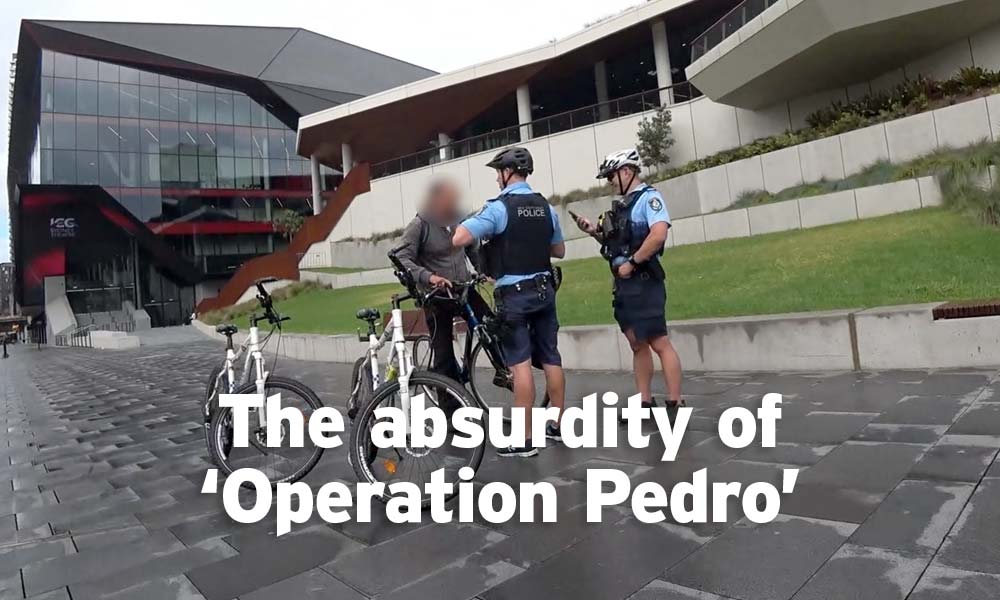 Cycling in NSW and the absurdity of Operation Pedro

Once again we see police in New South Wales being told to crack down on crimes by cyclists as part of a campaign called ‘Operation Pedro’. Is this really the best use of resources?

Riding a bike in Sydney is possible and, when done right, not only practical but fun and quite a treat to the senses. The sights of Australia’s largest city are something to behold, and often they are even better when seen while cycling.

It is, of course, also quite logical that cycling should be supported as a sustainable form of transport that helps alleviate congestion on our roads. There are many in Sydney who are part of the push to make bike riding easier and safer to do but, in recent days, we have again been reminded that not everyone wants cycling to be part of the city’s bigger picture.

The NSW police have again proudly published data from its so-called ‘Operation Pedro’ campaign. This is a targeted blitz against cycling crimes that emerges once in a while and although there is merit in reminding riders that they ought to obey the rules of the road, it’s a bizarre approach that surely could be managed better. 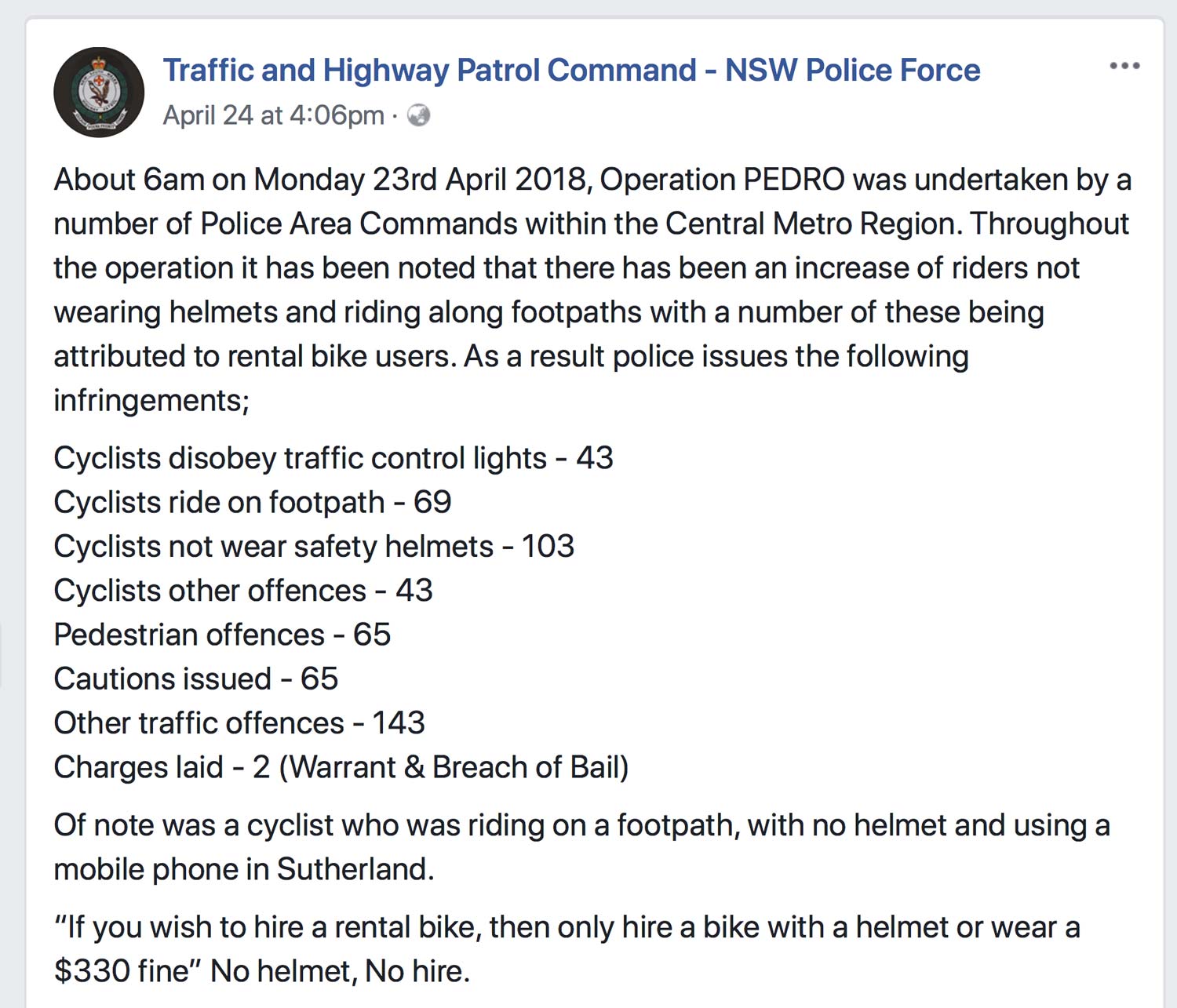 If you seek, you shall find. It’s not difficult to see people breaking laws on the roads of NSW – or, for that matter, just about anywhere you go. But the NSW police campaign that was on again in recent days suggests that cyclists are more of a danger to society than others.

Alas, every step forward for cycling in Sydney seems to be thwarted by a habit of targeting bike riders as though they are more of a menace than other road users.

Ask any cyclist in Sydney if they see mobile phone use by drivers when they’re riding on the streets; chances are, they have. I don’t recall any ride of late when I have not seen a motorist texting or checking their status update while at the driver’s wheel. Apparently it’s against the law and there are clever campaigns out there to remind people to simply ‘Get your hand off it’. But the message isn’t getting through.

People love their cars. They love their phones. And although, when combined, the two create a dangerous mix, they continue to be used in unison… usually without ramification, certainly not from police. One poorly timed text message, however, could easily cost someone their life. Seek and you shall find. There are law breakers all around the place.

For the sake of discussion, let’s consider what makes riding more dangerous now than in the past. When cycling in Sydney these days one of the most common concerns is dodging pedestrians who are not in touch with their surrounds. The smart phone begs for attention and usually gets it.

“Look out for the person on their mobile phone,” that’s my most common instruction to the kids when we’re cycling in Sydney.

Of course, we don’t want legislation to change how we walk around the streets, that would be a perpetuation of the ‘Nanny State’ approach that is so prevalent in other aspects of life. We all hope that common sense will prevail; be mindful when walking/riding/driving, look out for one another… and we’ll all live happily ever after.

But it doesn’t pan out that way. That’s why there are rules that apply to road use, to motoring, to cycling. And we hope that people adhere to them… because they make sense and are meant to add up to make the world a safer place to live.

But when it takes a couple of police officers to pull one bloke over in a quiet location to issue him a ticket for riding without a helmet, the mind boggles.

Yes, seek and you shall find – but Pedro, really, what are you trying to achieve? Is this education or a waste of resources that could be better directed at those who genuinely put the lives of others at risk?

Do we really need these targeted campaigns that seem little more than revenue raising exercises?

When I’m riding in Sydney I see cyclists doing stupid things. I see motorists and pedestrians doing stupid things. It happens. It’s part of life. We are all guilty of making errors once in a while. If we get caught, that’s a consequence of not being as attentive as you possibly could. But, on the whole, we’re all just trying to adhere to the rules of common sense.

Operation Pedro may seem like a good idea to the instructing officers but I’d rather see police enforcing other laws that are more detrimental to society. A speeding vehicle is more dangerous than any rider without a helmet will ever be; we’ll continue to see both on our streets but I know which crime is more important to manage.