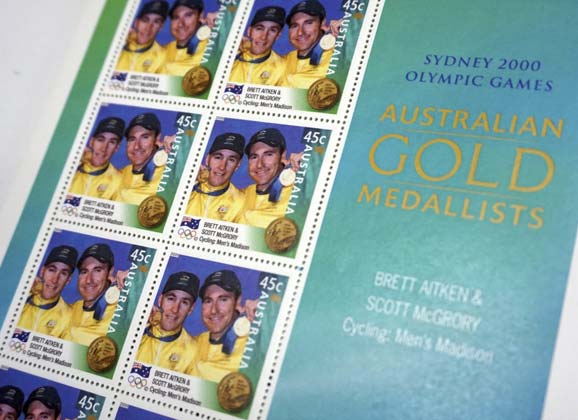 Cycling stamps: Australians at the Olympics

Cycling offers great memories. Ride and enjoy it. Or watch and relish what others are capable of doing on a bike, that’s also enjoyable.

We can document the memories of good rides and great races over the years and this is very much part of what RIDE is all about: we publish a magazine to share the spirit of cycling. We hope it provides a souvenir, a collectable product that you provides a reminder of what has happened in cycling since RIDE Cycling Review was first released in July 1998.

Australia Post, meanwhile, is also printing reminders of what cycling is all about. It has recently released its latest series on bikes (with the first day of release last week), but it’s far from the first cycling stamps.

During recent Olympic Games, a series of stamps have been released featuring Australia’s gold medallists.

The release of the new stamps prompted a look onto the shelves in the office… Below is a collection found during a spring clean at RIDE Media HQ. 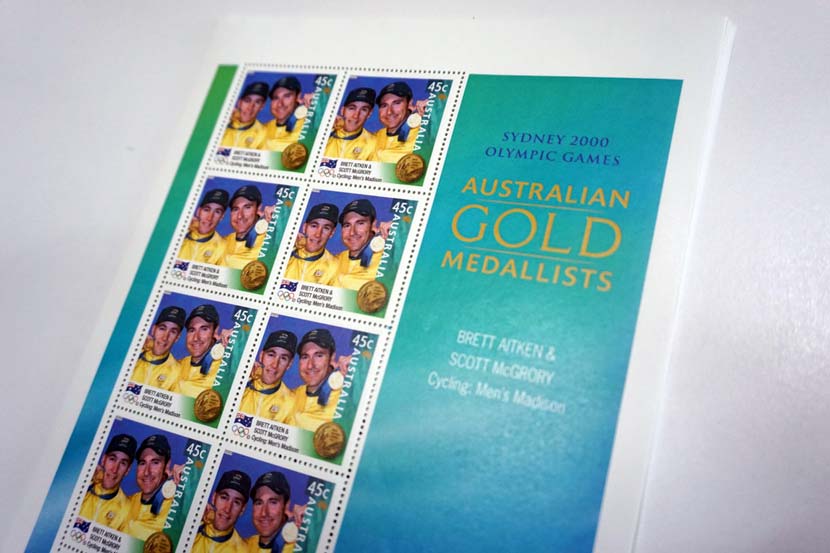 A ‘home’ Olympics and the debut of several exciting events on the program, including the keirin and Madison. Going into the Games, the Australians were confident in its pairing – Brett Aitken and Scott McGrory – but it was not an easy lead-up. On 1 July 2000, three-month-old Alexander McGrory died of a heart condition. A few months later, his father would be one of only two Australian cycling gold medallists at the Sydney Games. “There are a lot of people out there who are struggling to get over things like that,” McGrory told RIDE afterwards. Setbacks, he concluded, can serve as motivation. 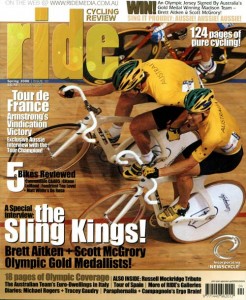 RIDE #10, published in October 2000, featured Aitken and McGrory on the cover.

A few months later McGrory would marry Alexander’s mother Donna Casey at what their friends had been told was a ‘thank-you party’ for all who supported them during a difficult time; midway through the night, the couple exited the room, changed clothes and turned up to exchange vows.
They now have two daughters.

Aitken and his wife, Natalie, also suffered a great loss: their daughter Ashli had Rett syndrome which severely affected her mobility throughout her short life. She was only young at the time of the Games in Sydney and, in 2009 at the age of 10, she passed away.
Both medallists continue to ride but their racing days are behind them now. 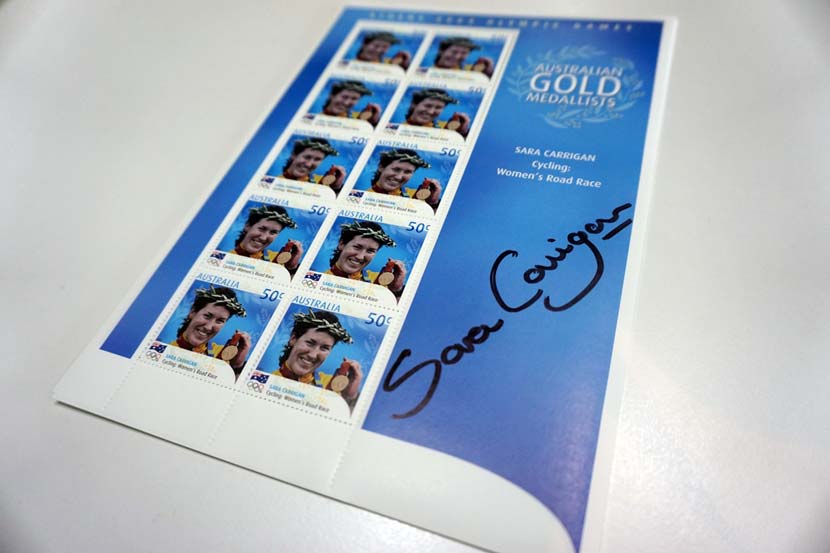 The Athens Olympics in 2004 were the best ever for the Australian cycling team. The first of six gold medals was won by Sara Carrigan in the road race. As part of a formidable trio – Carrigan, Olivia Gollan and Oenone Wood – the Australians were among the favourites for the win. “We all realised that one of us would get the glory,” Sara told RIDE after returning to Australia. “We were simply committed to the win, no matter who it was.”

Carrigan made her move on the climb of the closing lap along with German powerhouse Judith Arndt. They arrived at the line with a strong advantage on the rest of the peloton and the Australian’s patience and cunning in the finale earned her the gold.

This was the second time an Australian won the Olympic road race, following Kathy Watt in 1992.

Carrigan recently became a mother and she continues to ride although her racing days are behind her. 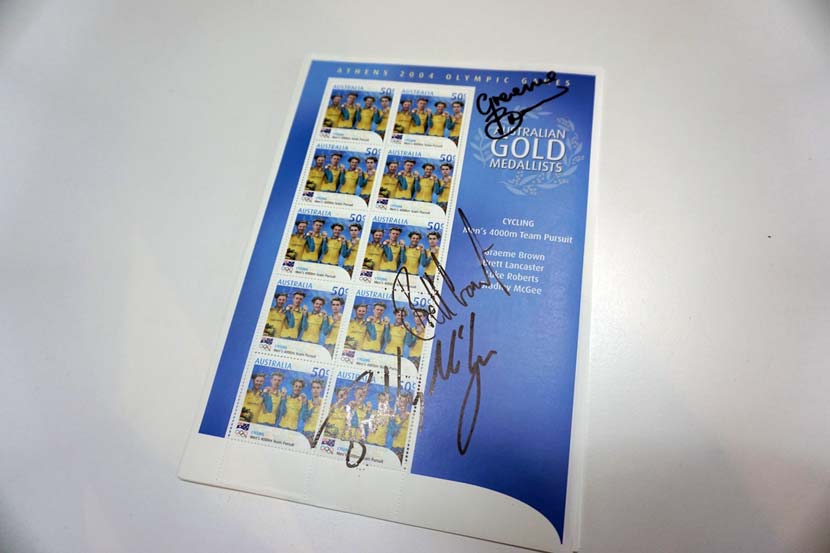 In 2004, an Aussie quartet set a world record in qualifying (3:56.610) and then won a second team pursuit gold medal for Australia (after 1984). Graeme Brown, Brett Lancaster, Luke Robert, Bradley McGee contested the final against the British team – Steve Cummings, Rob Hayles, Paul Manning and Bradley Wiggins – but Peter Dawson and Steve Wooldridge were also part of the qualifying rounds.

Brown and Lancaster are still competing in 2015 with the Drapac and Orica-GreenEdge teams, respectively.

McGee is now one of the Australian team selectors, he works as a coach for the NSWIS team and remains closely involved with all levels of cycling. He has been the directeur sportif for Australia at the past two world championships. 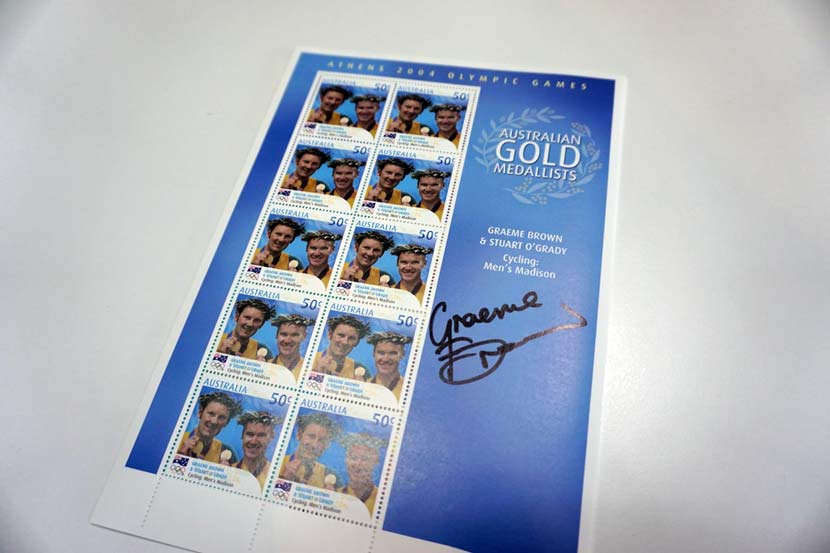 The unlikely pairing of Graeme Brown and Stuart O’Grady combined to earn Australia its second successive gold medal in the Olympic Madison. Two strong personalities and phenomenal riders, they beat the Swiss and British combinations in Athens with a tally of 23 points. Bruno Risi and Franco Marvulli finished second with 15 points while Wiggins and Hayles moved up onto the podium four years after their crash in the closing laps and claimed bronze. 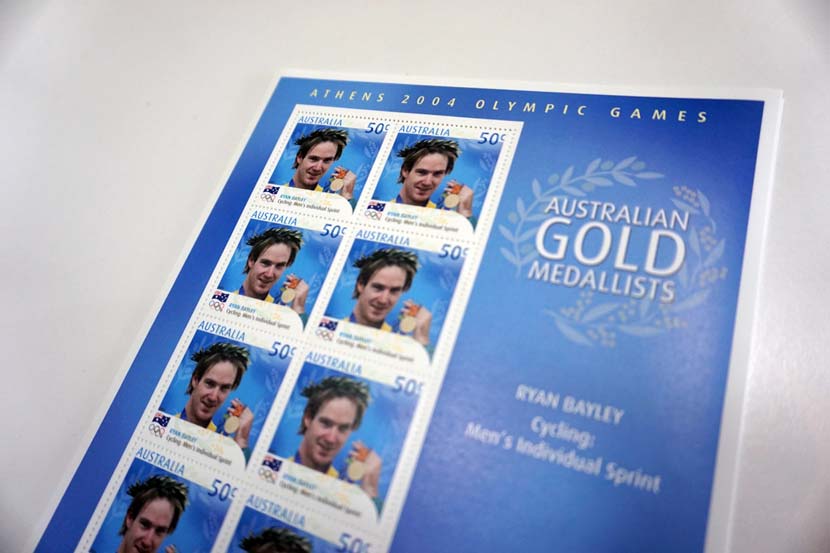 Ryan Bayley dominated the sprint events in Athens beating Theo Bos 2-1 in the best-of-three final. It was the first of Bayley’s two gold medals in 2004.

“Usually sprinters prefer the back spot. It’s good because you can line your rival up. But I was thinking, ‘Oh, he doesn’t want me to have the front.’ So I backed it off a bit. Took the pressure off, gave him a false gap – one that was enough to make him believe he could take the sprint. And that’s exactly when he hit it. I got up to speed and raced at him really hard.

“I came out of the corner thinking, ‘Yeah, I’ll pip him on the line.’ And then I just shot straight past him. I was a very relieved boy.” 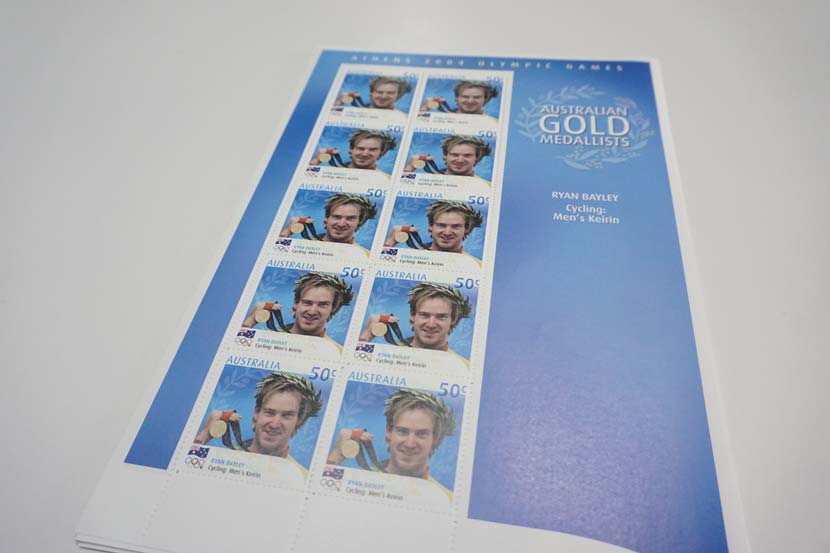 There was mayhem in the final of the keirin but the master of the sprints in Athens, Ryan Bayley survived… and claimed another win. His team-mate Shane Kelly, rounded out the podium with third place.

Both Australians made the final so the odds were stacked in their favour, although not entirely. “I hate to race a mate,” Bayley told RIDE. “I don’t mind messing up anyone else’s race because I really don’t care about them. But I don’t want to mess up a mate’s chances.”

Bayley had been a world champion before but he was clearly still affected by his win at the worlds in 2001 when Jobie Dajka crashed and took out the field, leaving Ryan to race ahead and into the rainbow jersey.

“That scarred me for life,” said Bayley of the worlds in Antwerp. “When I race with another Aussie now I’m really conscious of it.”

(Read our report from 2004 and listen to what Ryan Bayley had to say about the Athens experience 10 years after the victories.) 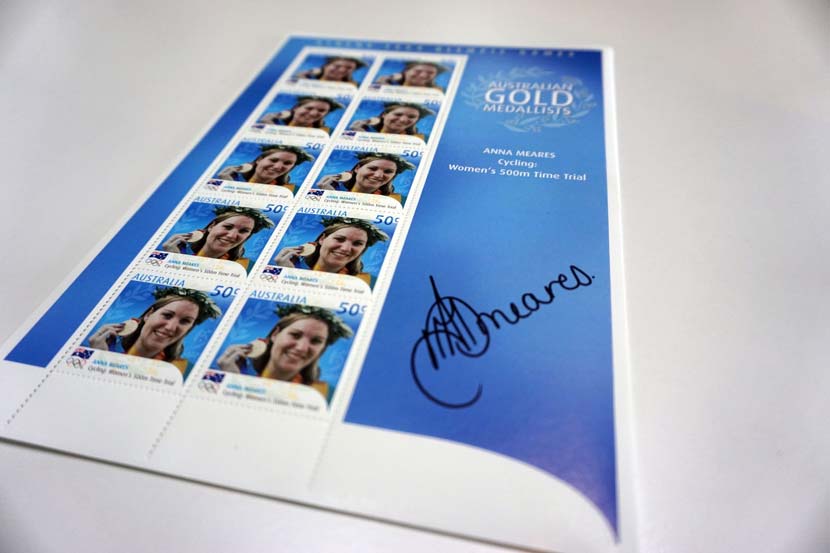 The first Olympic gold for Anna Meares came with a world record ride in 2004. She was the world champion in the 500m and thus the last starter in the TT. A fly buzzing near her helmet distracted her before the start but she held focus and became the first woman ever to race the two-lap event in less than 34 seconds.

Meares continues to race and she has her sights set on a fourth successive Olympic campaign in Rio. 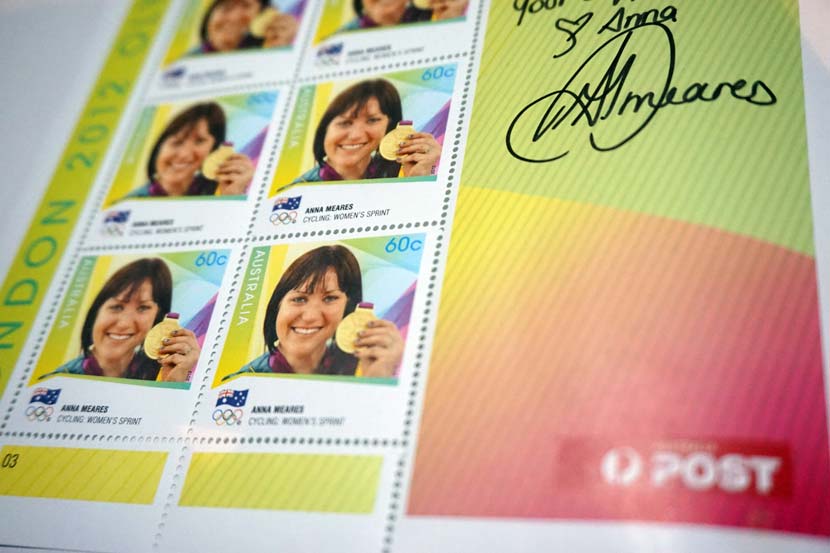 There were no Australian cycling stamps from the Beijing Olympics. The only medal for the Aussie team was a bronze for Anna Meares in the sprint.

Come London in 2012, there would be one Australian back on the top step of the podium: Anna Meares. Her pet event, the 500m TT was off the Olympic program but she beat hometown star, Victoria Pendleton in the sprint to earn a second Olympic gold. 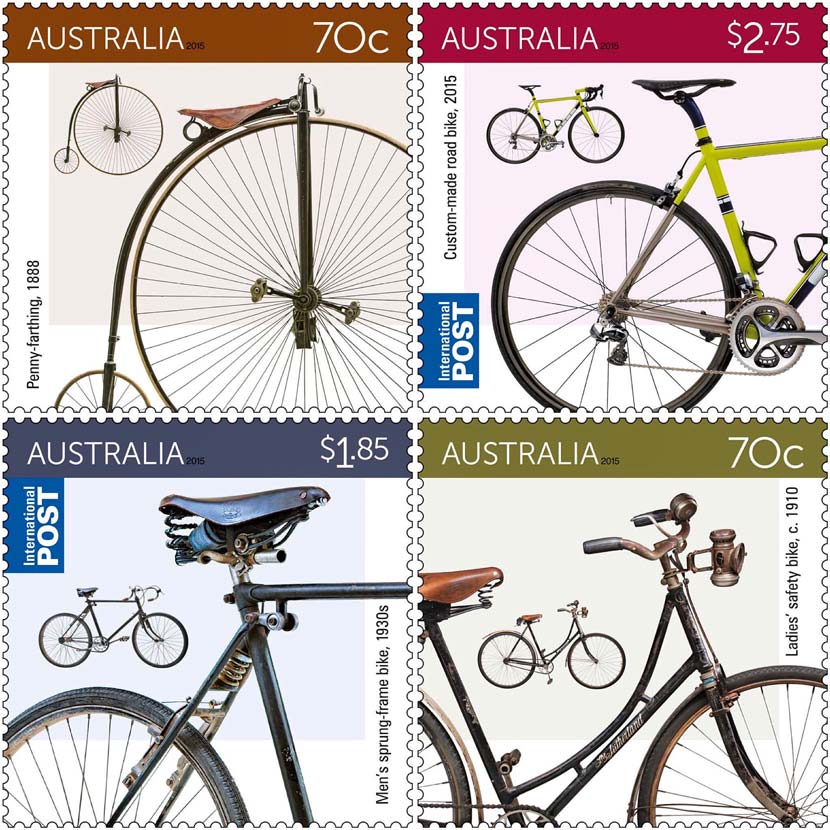