Danny Clark is still in hospital a week after he was knocked off his bike but is hopeful of going home soon. He is also echoing calls from medical professionals and transport officials to make cycling safer in Australia.

Danny Clark has spent six nights in hospital after another bike rider crashed into him while he was riding on the Gold Coast last week. He is full of praise for the care he has received from hospital staff but believes the road network requires a significant overhaul to cope with the influx of people exercising in walking and riding hotspots like Mermaid Beach.

“It’s absolutely dangerous,” said Clark about the site of his accident. “I might even see if I can do something with the council. There’s no signs, there’s no nothing.”

The 68-year-old lives nearby the stretch of road near the beach where he was crashed into. He had only been back on the bike for around a week after a hiatus from riding because of a weight-lifting injury sustained late in 2019.

Clark is one of the most capable cyclists in Australia and yet it was a minor run-in with another bike rider that earned him five broken ribs, an operation, and a long stay in hospital.

“The trouble is the pain is absolutely unbelievable, so I’ve been on a lot of medication,” Clark told RIDE Media earlier today.

“I’ve been on this experimental thing where they put an injection into my spine and try to deaden the nerves around the area where the ribs are broken. Then I had two intravenous drips of painkillers, plus painkiller pills.

“I’ve had some bad crashes in my life, and this is the worst.

“I can’t really explain the pain I have. I can’t stand up. I can’t sit down. I can’t lean on anything. Even going to the toilet is painful. It is just mind-boggling.”

On the day of the accident, Clark told RIDE Media he wasn’t keen on staying in hospital, not even for one night, but doctors believed it was necessary to operate because of the complexity of the breaks. It turns out, it was even more complicated than the original diagnosis.

“They knew I had broken ribs. They couldn’t see on the x-rays, but during the operation they made the decision to put plates on four of [the ribs].

“There was another bit of a problem with my rib cage crushed inwards, so that made the operation difficult: all the little pieces – called ‘floating ribs’, which means they break in different places – meant there was a lot of work involved.

“Plus, my lung was half full of fluid… so I was going into the operation thinking I was just going to get a couple of plates put on, but it turned out a little bit worse than that.” 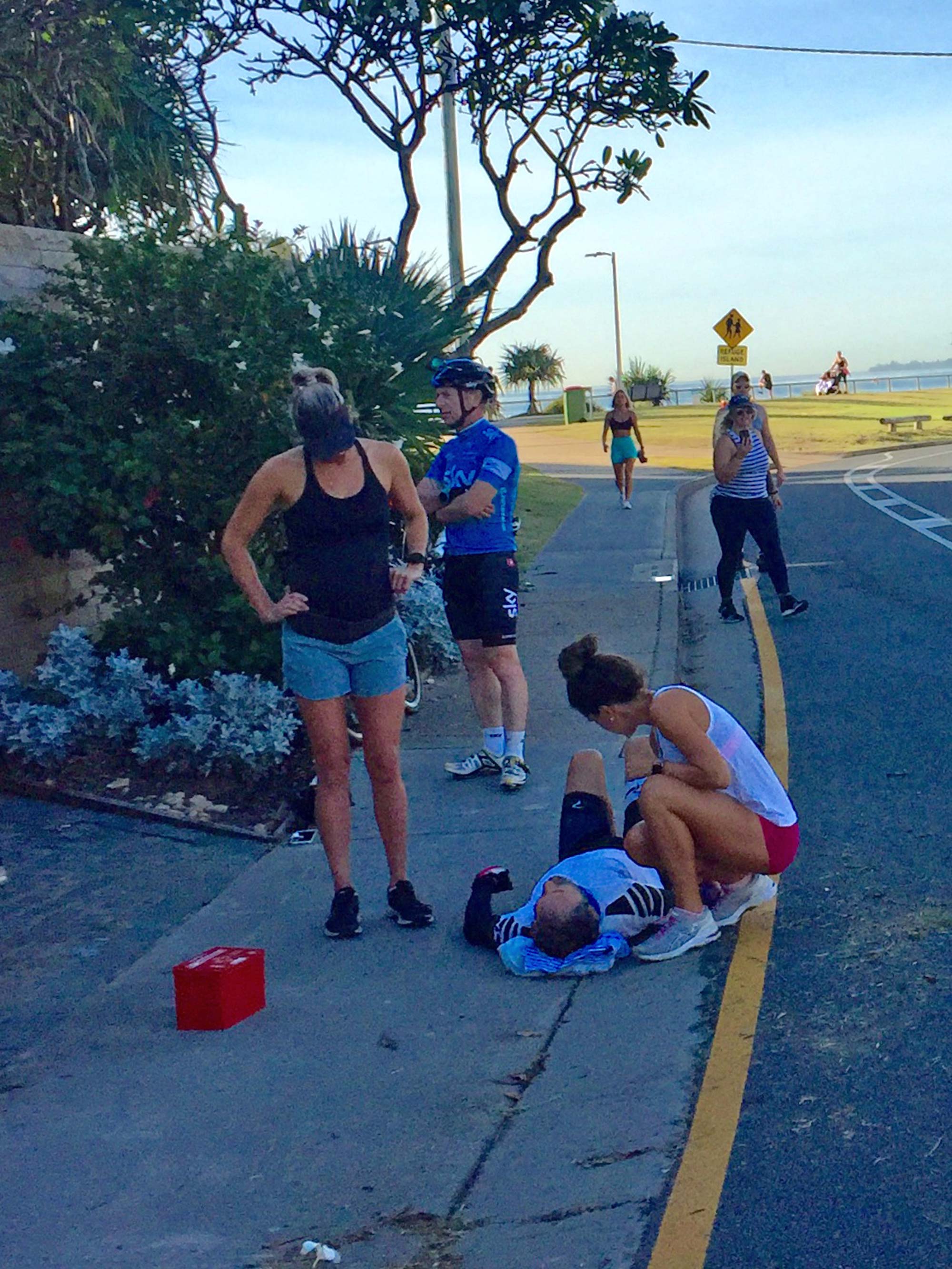 Danny Clark is attended to by passing medical professionals after his accident on 21 April.

While grateful for the attention he has received since arriving at the University Hospital, Clark echoes sentiment from medical and transport professionals who are lobbying various levels of government to create better infrastructure for cyclists and pedestrians.

There has been a surge in exercise activity since the lockdown measures introduced in response to the COVID-19 pandemic were enacted.

“Now is the time to act,” said the CEO of the Amy Gillett Foundation (AGF), Dan Keipp last week when calling on governments to do more to ensure there are safe places to exercise. “We call on our leaders to listen to our nation’s experts. Safety for people riding bikes is an essential service.”

– For more: Campaign for urgent changes to cycling and walking infrastructure –

On the same day as Clark’s operation, the AGF issued a press release in support of Dr Ben Beck, from the School of Public Health and Preventive Medicine at Monash University, who is “concerned for safety as our paths and cycleways are inadequate to handle the physical activity requirement during this crisis”.

Although unaware of Beck’s campaign, Clark was quick to note how hectic it was near the site of his accident. Ordinarily there is a lot of activity near the waterfront at Mermaid Beach and, with even more people walking and cycling, the Gold Coast local said it is treacherous.

“It is the most dangerous and stupid cycle path and traffic planning in the whole country,” said Clark before explaining a complex arrangement he believes is unsafe even when being used by competent cyclists.

“If you’re looking north, on the right-hand side of the road they’ve got a bike lane which goes two ways,” said Clark. “It’s only really big enough for one and a half bikes to pass, but the riders have to go north and south on that lane.

“If you’re heading south there’s a slow left turn and then the bike path ends and goes up onto the beach. So, people ride along the top of the beach if they’re going north, then they go out onto the road, then they turn back onto the bike path… if there’s space. Then, you’ve got to put up with a car coming straight at you in that lane.”

It is one of many examples of how poor planning can result in unnecessary hospital visits and this is one of the reasons why Dr Beck and “over 100 Australian doctors, nurses, public health and transport researchers and health promotion organisations” are calling for rapid changes to infrastructure.

RIDE Media reported on changes to road regulations that have been made in cities like Brussels, Berlin, Paris and Bogotà to make cycling and walking safer, particularly when lockdown measures are in place*.

“As yet,” Dr Beck notes, “we have not seen a similar response in Australia, and we need to act now.”

Danny Clark shouldn’t be in hospital but he’s there because of an accident with someone in a crowded area. Witnesses have said a crash was “inevitable”, largely because of the influx of people exercising.

Fortunately for Clark, five runners who were nearby happened to be medical professionals. “I was lucky in a way,” he said, “because four nurses and a doctor were right there at the scene where I crashed, and they stayed there the whole time with me until the ambulance came.”

While he’s healing – and even considering the possibility of going home later today, a week after the crash – he is also aware that accidents are likely to be more prevalent at a time when there’s a surge in cycling and walking activity.

“There are plenty of people who have pulled their bike out of the garage after 10 years of neglecting it. They come onto bike paths like the one where I had my crash, and they don’t know what to do.”

When asked if he had any advice for people who are riding a bike again, Danny replied: “First of all, they’ve got to make sure they can ride a bike properly because if they haven’t been on it for a while they may lose their control, or forget some of the technique.

“And then,” he added, “if they go somewhere that looks as though it might be busier or a little more dangerous, they’ve got to slow right down and have a look at the situation.

“In a place like Surfers Paradise, people are in a dream world up here. They’re looking at the beach and everything else that’s happening around them and they’re not really taking much notice of what’s happening on the road.”

At this time of restrictions on many aspects of life, it’s obvious that more people are cycling in Australia. It’s encouraging to see more riders on the roads, and it would be great if more could be done to make the activity safer for all involved.

*NOTE: RIDE Media has contacted cycling officers in a number of major centres in Australia and asked if any changes to road infrastructure have been made since lockdown measures were applied. We are yet to receive a response from any council.