For the third time in two days, the Danish pursuit team broke a world record as part of an amazing campaign that earned a gold medal and world championship title with an incredible time: 3:44.672. 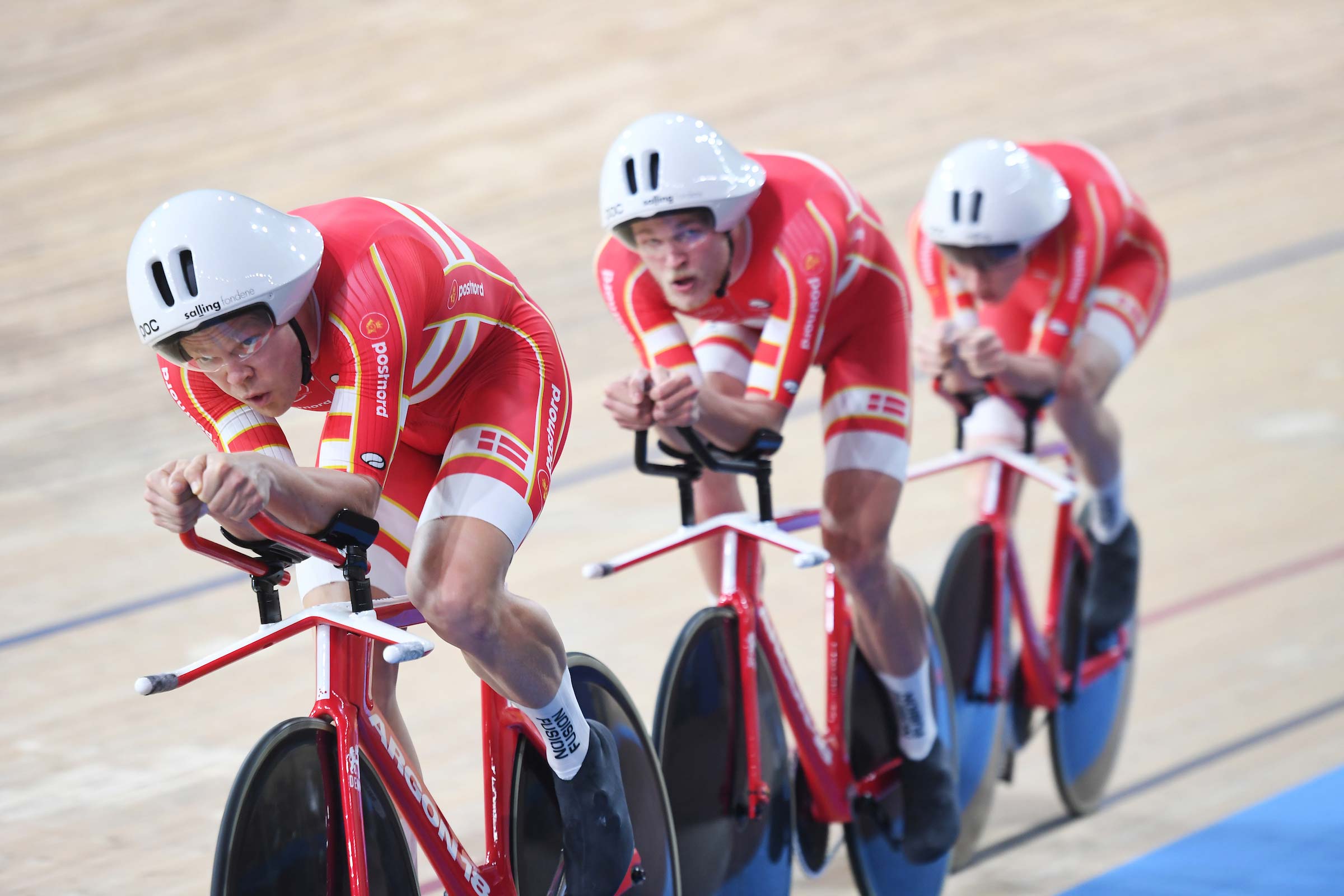 It started with an opening kilometre of 1:00.992 and the time analysis outlines the rest of the story. Fast start. Fast middle. Fast finish. The men’s team pursuit is one of cycling’s blue ribband events and in 2020 any preconceptions about how quickly it could be ridden are being obliterated by the Danish team.

On the opening day of the world championships in Berlin, in the qualifying round, the four Danes dropped the world record from 3:48.012 down to 3:46.579.

And yet the Italians, beaten by the new force of team pursuiting on Wednesday, never got a chance to race for the gold medal. Instead, they would face the defending world champions, Australia, for the bronze medal on Thursday in Berlin.

We’ll get to the Italian’s capture of the Australians in a moment, but first, let’s consider the efforts of Hansen, Johansen, Madsen and Pedersen. (Is it possible to get four more Danish sounding names?) 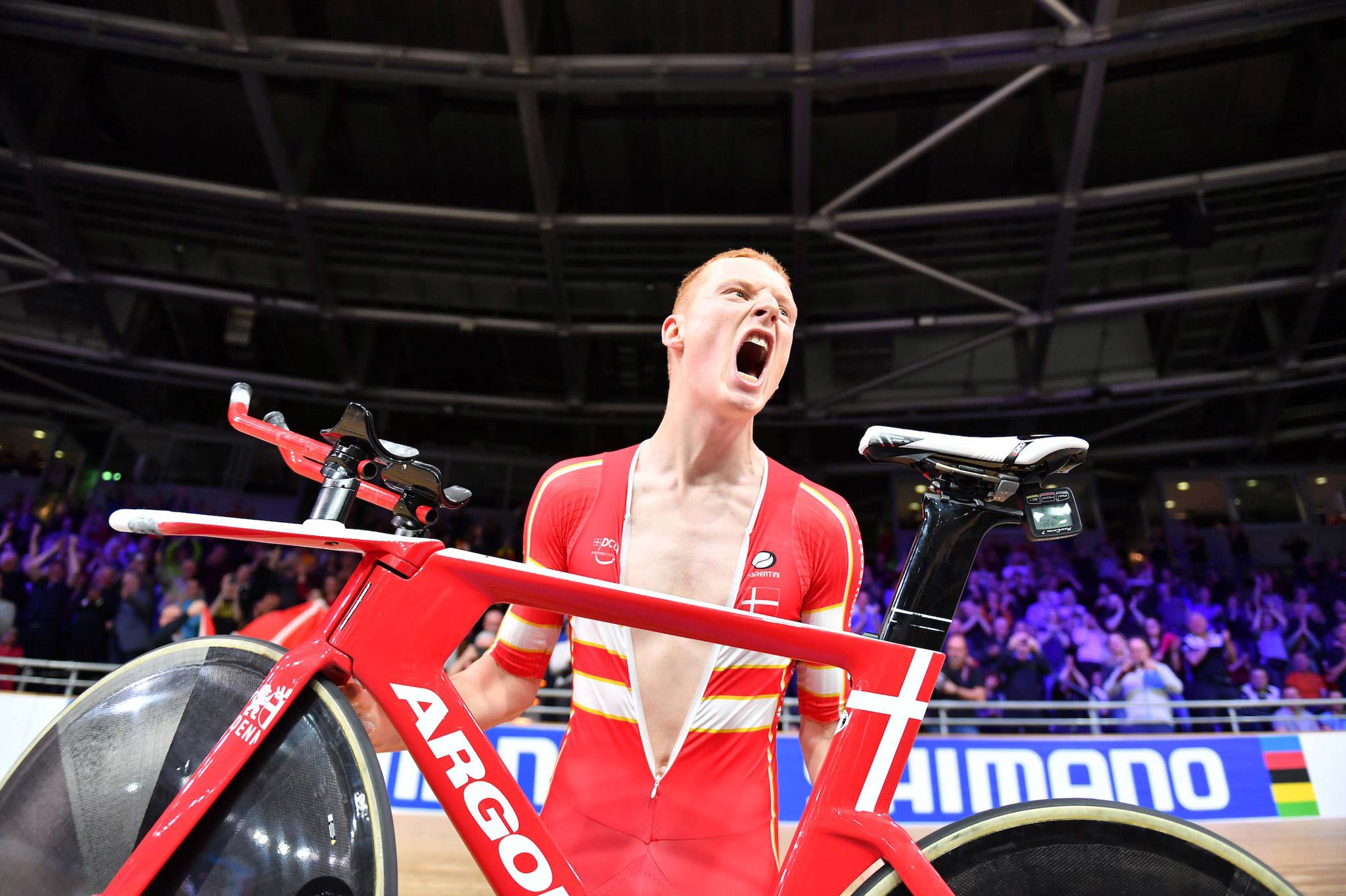 It is a championship that has redefined the look of pursuiting even if riders from the winning team were riding ‘old’ Argon18 track bikes – not the new ones, the Electron Pro, unveiled the day before the worlds by the Australian camp (and created in an exclusive arrangement as part of the Aussie team’s partnership with the Canadian brand).

The POC helmets that were originally used by Scandinavian teams in elite competition as long ago as the Beijing Olympics in 2008 no longer attract the attention they once did. Still, outsiders tuning in to watch the racing this week (yeah, good luck with that… but that’s another story) were quick to comment on the extreme aesthetic, without considering the effect such an extreme shape may have on times.

Aerodynamics is such a huge part of track racing these days and the merit of various new products will be debated for years to come. Still, the Danish times tell us one thing about the equipment used: ‘old’ bikes and big helmets help earn fast times! 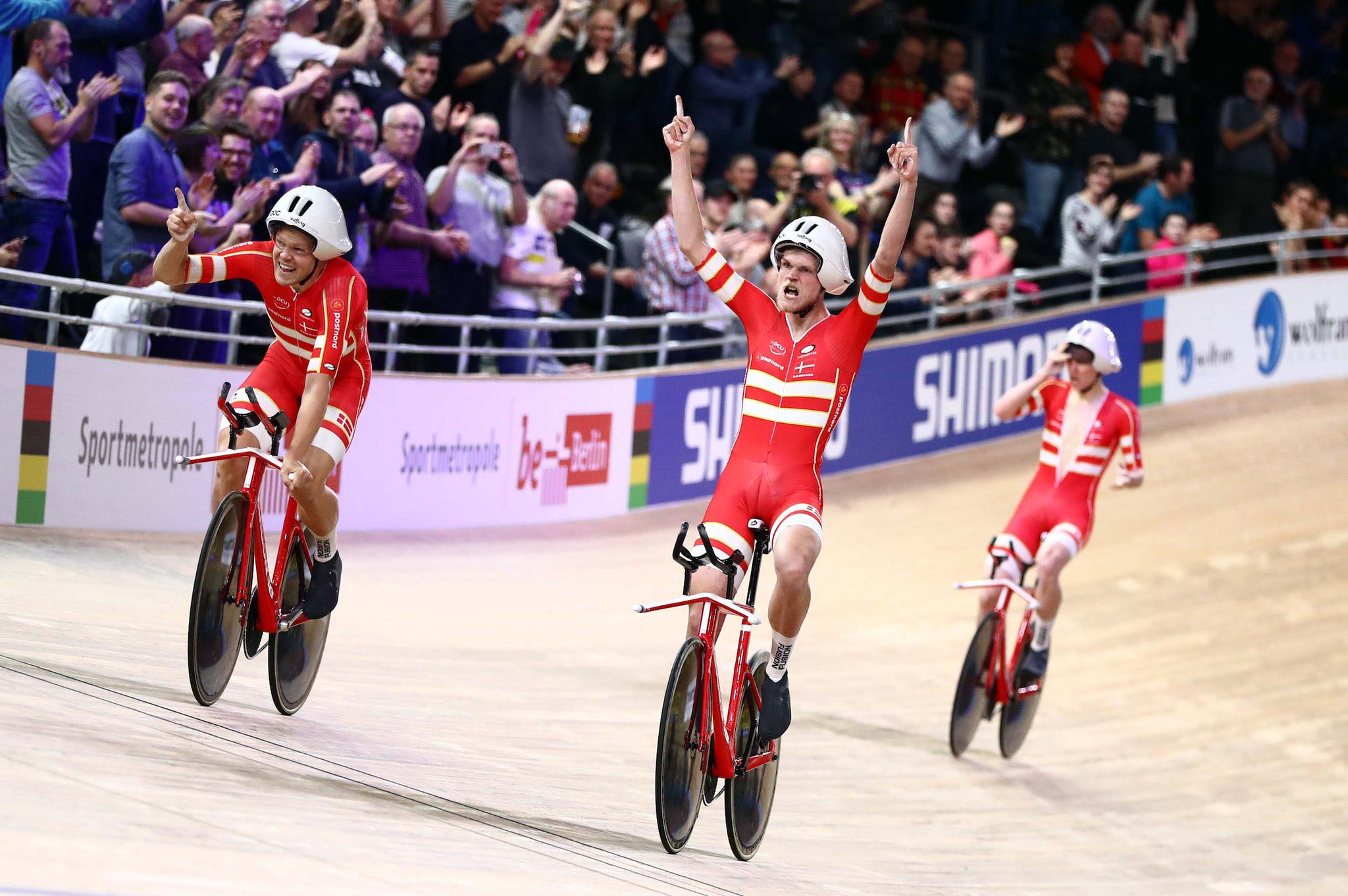 Denmark faced New Zealand in the final. The formidable Kiwi combination was Campbell Stewart, Corbin Strong, Aaron Gate and Jordan Kerby – he who won a pursuit world championship for Australian a few years ago, only to be flicked by the national team and prompted to ‘defect’.

On Wednesday, New Zealand qualified with the second-best time. In round one, the Kiwi team broke what had been the world record until these championships, with a 3:47.501 against France to earn the right to race against Denmark in the final.

Although the New Zealanders improved their start time on Thursday, riding a 20.635 opening lap (and a 1:01.816 opening ‘kilo’) – a fraction of a second better than round one – they were already almost a second behind Denmark after 1,000m.

As the Danes surged, the puff went out of the Kiwi combination… but not as dramatically as it did for the Australians against the Italians moments earlier. 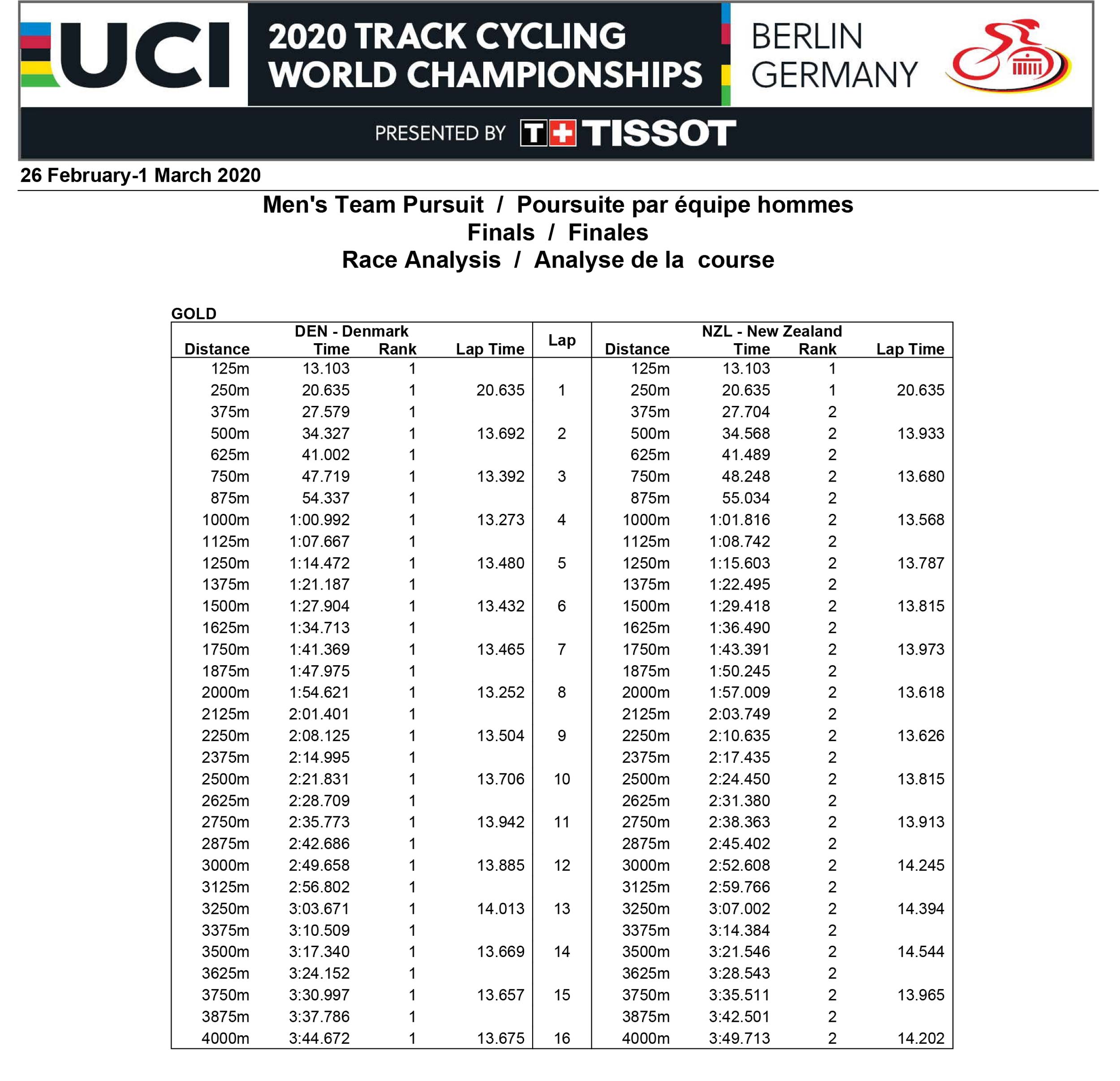 Pedersen would drop out of the paceline, just as he did in round one, but the other three maintained the momentum and belted another one and a half seconds off their previous world record. Stopping the clock at 3:44.672, it is a performance that elicits a universal response. Wow!

Cycling aficionados will share the same gobsmacked expression for a long time yet to come as they consider that ride and the time. It is a number that will be repeated for a long time yet: 3:44.672! For four kilometres. From a standing start. 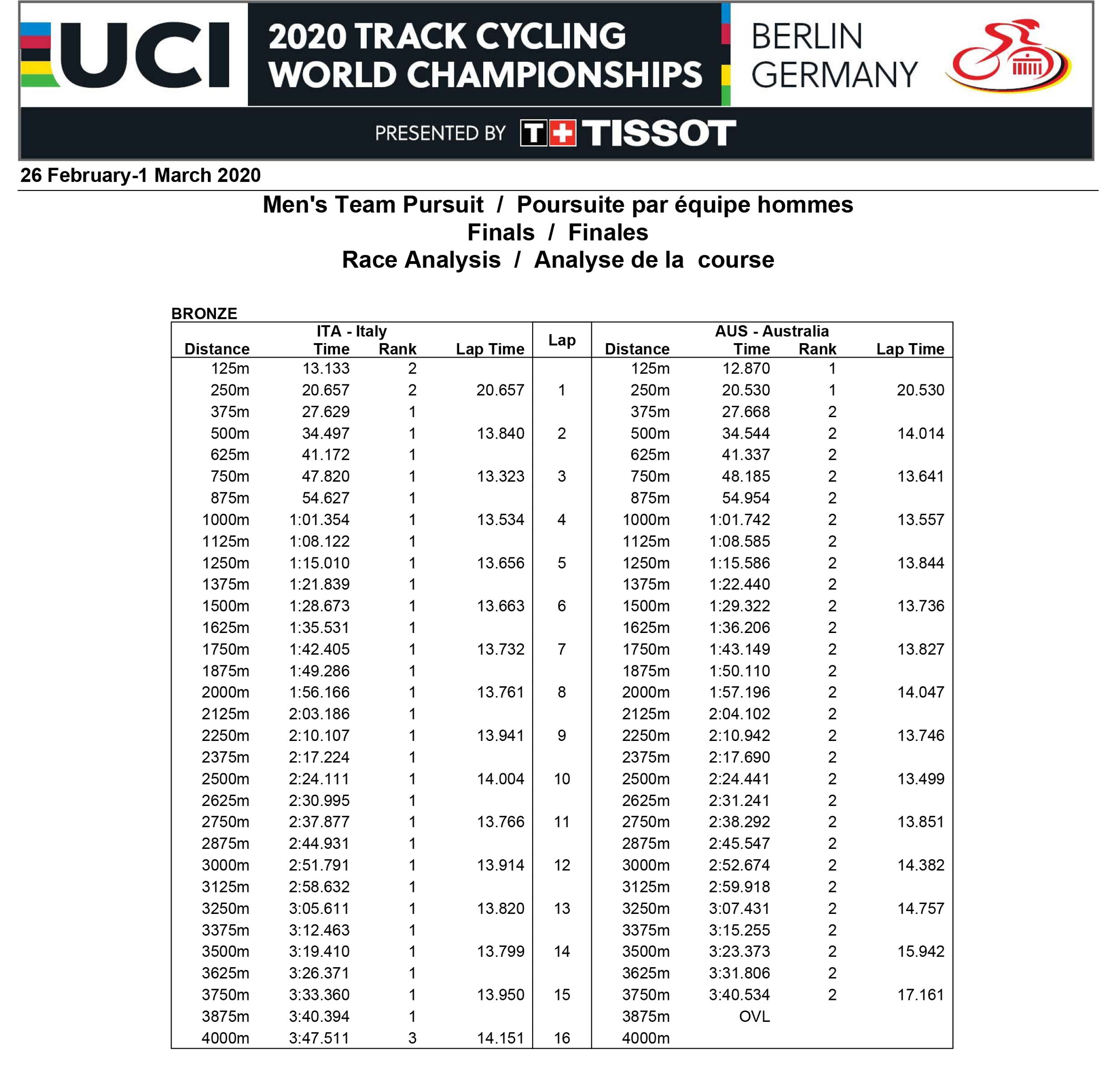 Meanwhile, earlier in the bronze medal ride, the Australians weren’t having the championships that they have enjoyed in the year of recent Olympiads. In both 2012 and 2016, the Aussies won gold at the worlds (and silver a few months later at the London and Rio Olympics, respectively).

In Berlin, without the firepower of Kelland O’Brien (who crashed and broke a collarbone at the Tour Down Under in January) and while still building form on the approach to a planned rendezvous in Tokyo later this year, Australia was toppled by Italy.

It was expected. Ganna did enough on Wednesday – reportedly finishing off the ride against Denmark in round one with a four-lap turn that very nearly reeled in the Danes – to demonstrate that Italy is now a key pursuit protagonist again.

A fast opening in Berlin put Italy ahead of Australia after a kilometre, but only by a fraction of a second. At the start of the third kilometre it was looking ominous.

Australia was fading. Italy was holding the pace.

With a lap to go, the gun fired signalling the capture. ‘OVL’ is the denotation in the analysis: overlapped. Caught. No time posted by the defending world champions.

What’s next? Onwards to Tokyo.

The Danish team has set a new standard and 3:44.672 is a number that will be remembered for a long time yet. 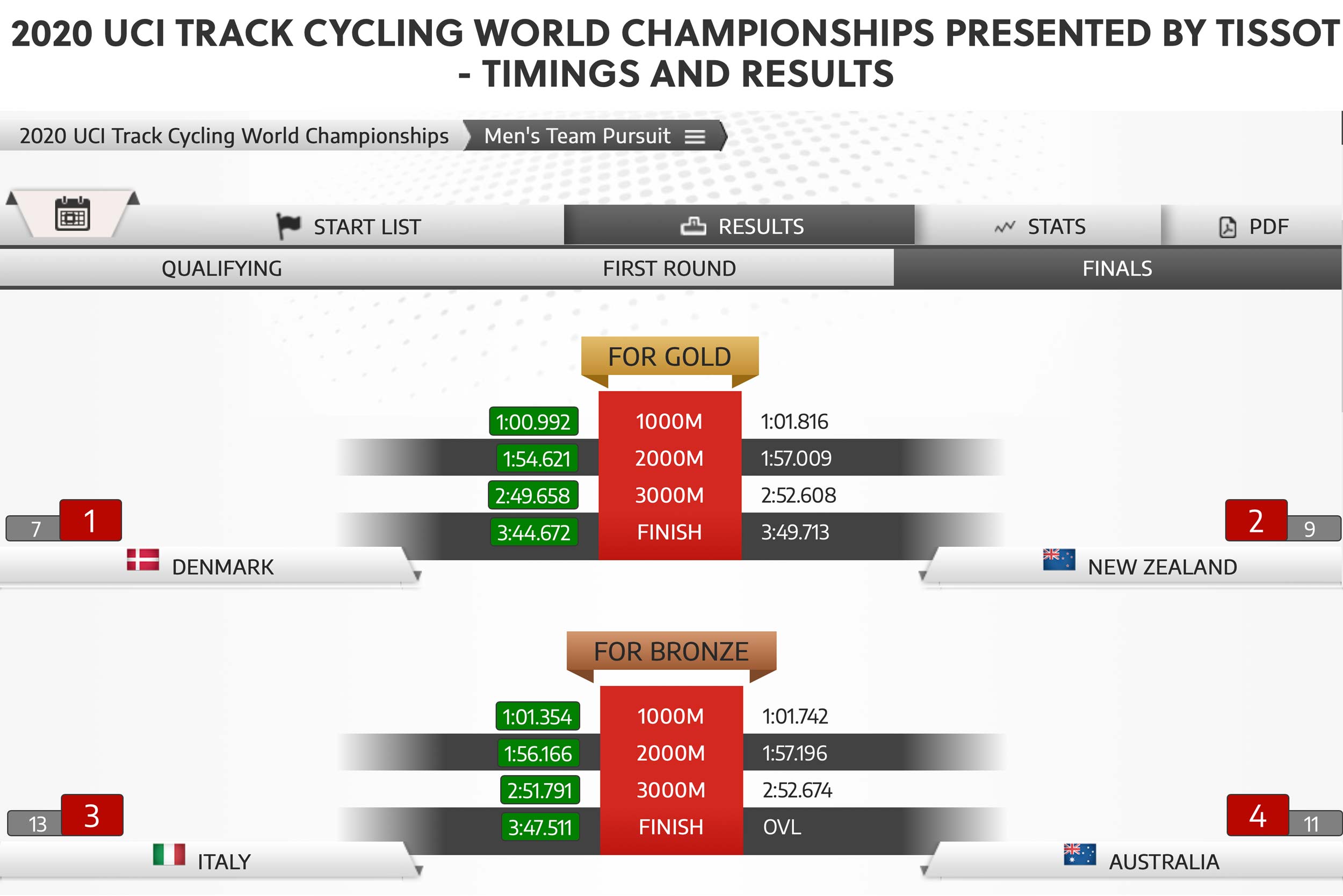