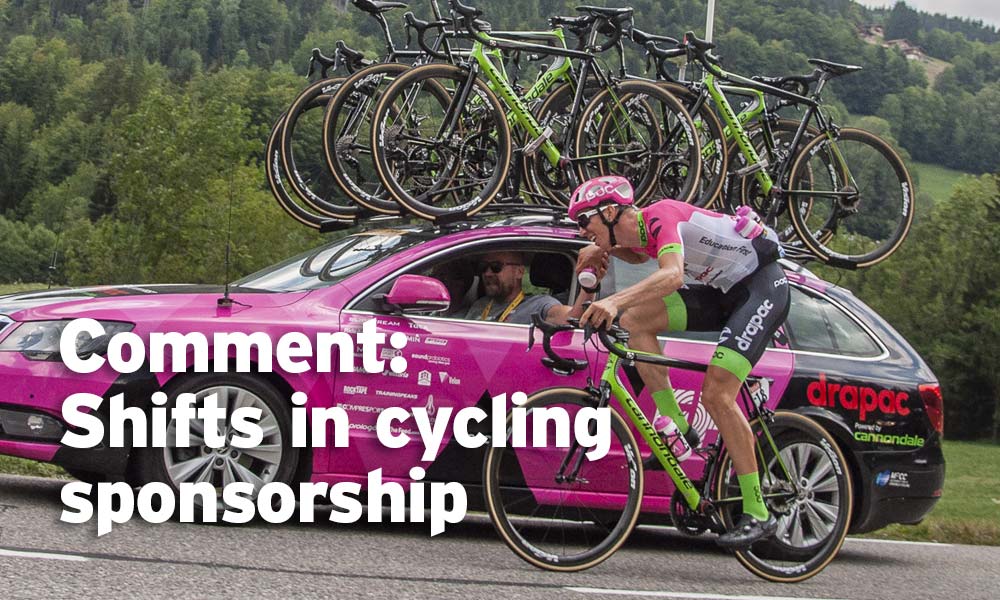 Drapac shifts cycling focus: from WorldTour back to development

In less than 24 hours, the Australian influence on the WorldTour peloton dropped a little. Two major sponsors that had been along for the ride for a couple of years have opted for a change in strategic approach and the cost to pro cycling is an absence of several million euros investment, a void that is proving more and more difficult to fill.

Factor Bikes and Drapac Capital have each spent millions on WorldTour sponsorship in recent times, one as bike supplier for the French-registered AG2R La Mondiale team, the other as co-title sponsor of the US-registered ‘Slipstream’ squad known in 2018 as EF Education First-Drapac powered by Cannondale. Both will be gone from the highest-tier of the peloton at the end of the year. Both will, however, remain involved in cycling – as, quite simply, the company owners are passionate about the sport. 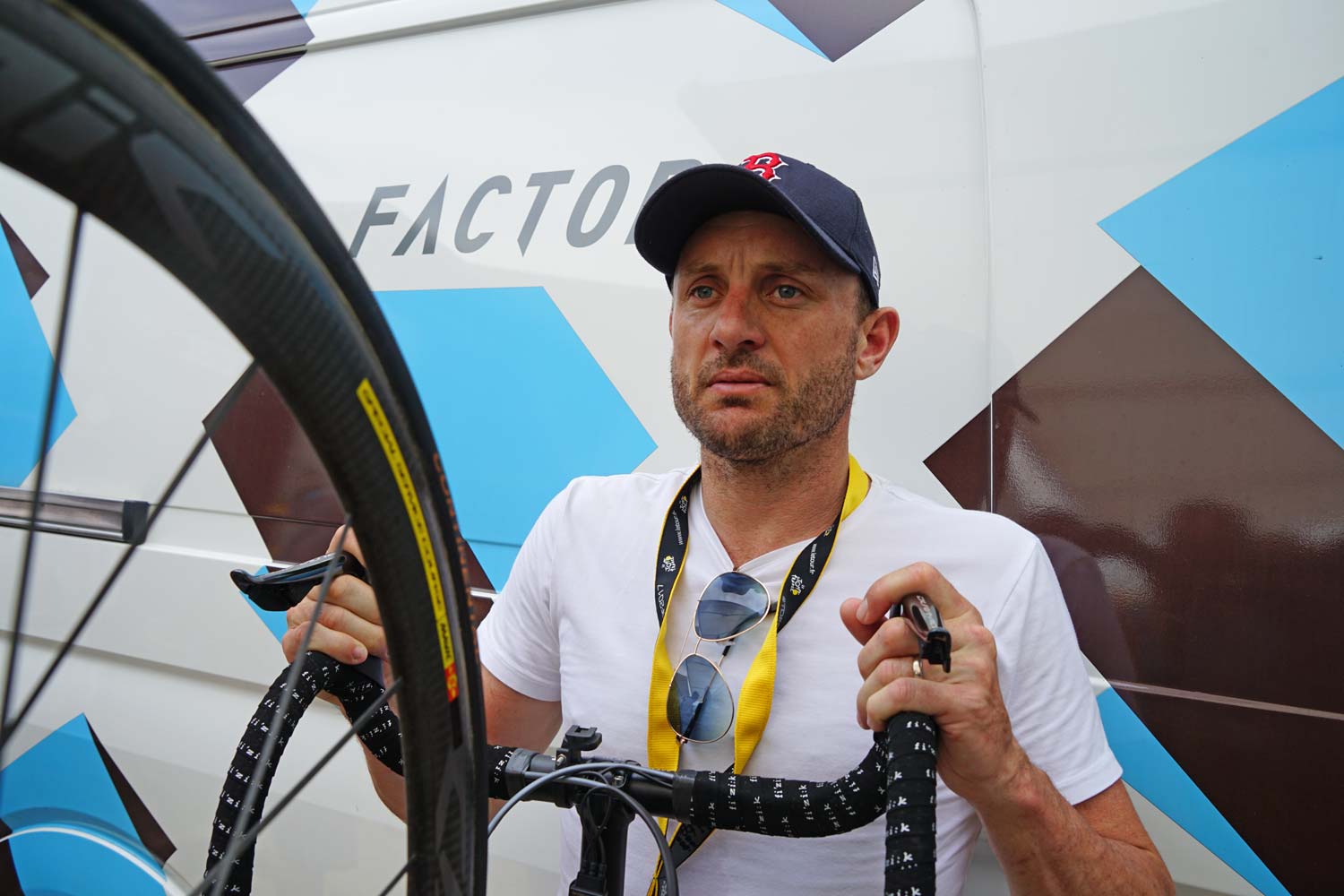 Baden Cooke, the former racer who is now a co-owner of Factor, explained the change in a quick text yesterday evening moments after AG2R La Mondiale issued a release stating that Eddy Merckx bikes will be used by the team through to (at least) the end of 2020. “It’s a strategic decision by us,” wrote Cooke.

The French team provided great exposure for what was effectively a brand trying to earn stronger presence in the bike market. Cooke and his business partners will take a breather from sponsorship at the WorldTour level and “develop the range without WT pressure”.

Factor will continue to sponsor cycling only, from 2019 onwards (for a couple of years at least), it will be with a lower-tiered team.

Michael Drapac entered the WorldTour in late-June 2016. He has long backed Australian cycling with sponsorship of a team on the domestic scene and he has remained steadfast in his approach to combine sport and education with his investment. His foray into the upper echelon of pro cycling came by way of a partnership with Slipstream and, for two and a half seasons, the ‘Drapac’ brand appeared on a jersey in the world’s biggest races.

‘Cannondale-Drapac’ morphed into what we know it as in 2018 – with the long, formal name often abbreviated to EF-Drapac –but, moving forward, the Australian element of the title will be removed.

Many cycling aficionados know the curious sequence of events that led to the arrival of EF Education First into the sport, first as a sponsor and, ultimately, as owners of the team. It was a surprising reward for what initially seemed a desperate, ad-hoc attempt to keep the team alive: crowd funding, a panic-plea for support… or else everyone involved was out of a job.

Luckily – amazingly – the subsequent panic caught the attention of one cycling fan who talked about it with another cycling fan and eventually a rescue package was offered by the Boston-based global education/travel consortium.

It is another significant investment from another company that hopes to raise its profile by using cycling. Eddie Hult is the driving force behind the US company’s presence in the pro peloton and his vision extends beyond traditional elements of what cycle sport has been.

Only a few weeks ago there was considerable fanfare surrounding the re-entry of Rapha into the WorldTour peloton in 2019. Hult, his staff at EF Education First, and the people behind the Rapha brand have stated that they’ll be “taking a disruptive approach to the sport”. This is good for cycling and a reminder that it is evolving, adapting to the demands of the fans, sponsors and, of course, the riders in an attempt to remain relevant in a rapidly changing sports market.

Exactly what comes from the ‘disruption’ remains to be seen but it’s clear that there needs to be some level of innovation if cycling is going to prosper into the future. We can also hope that the disruption provides some longevity for the sport that is slowly but steadily being brought down to its knees as sponsors – many of which could accurately be described more as “benefactors” – depart and teams find themselves in financial disarray.

The good news is that cycling’s evolution continues and although the magic recipe for greater global integration of bike riding into societal habits is yet to be found, there is enough innovation to allow for a sense of optimism.

What cannot be ignored, however, is the influence of Slipstream’s co-founder Jonathan Vaughters. The former pro cyclist turned his attention to team ownership over 10 years ago and he has introduced numerous sponsors to the sport… but few hang around for very long after having passed the honeymoon of the charm offensive. 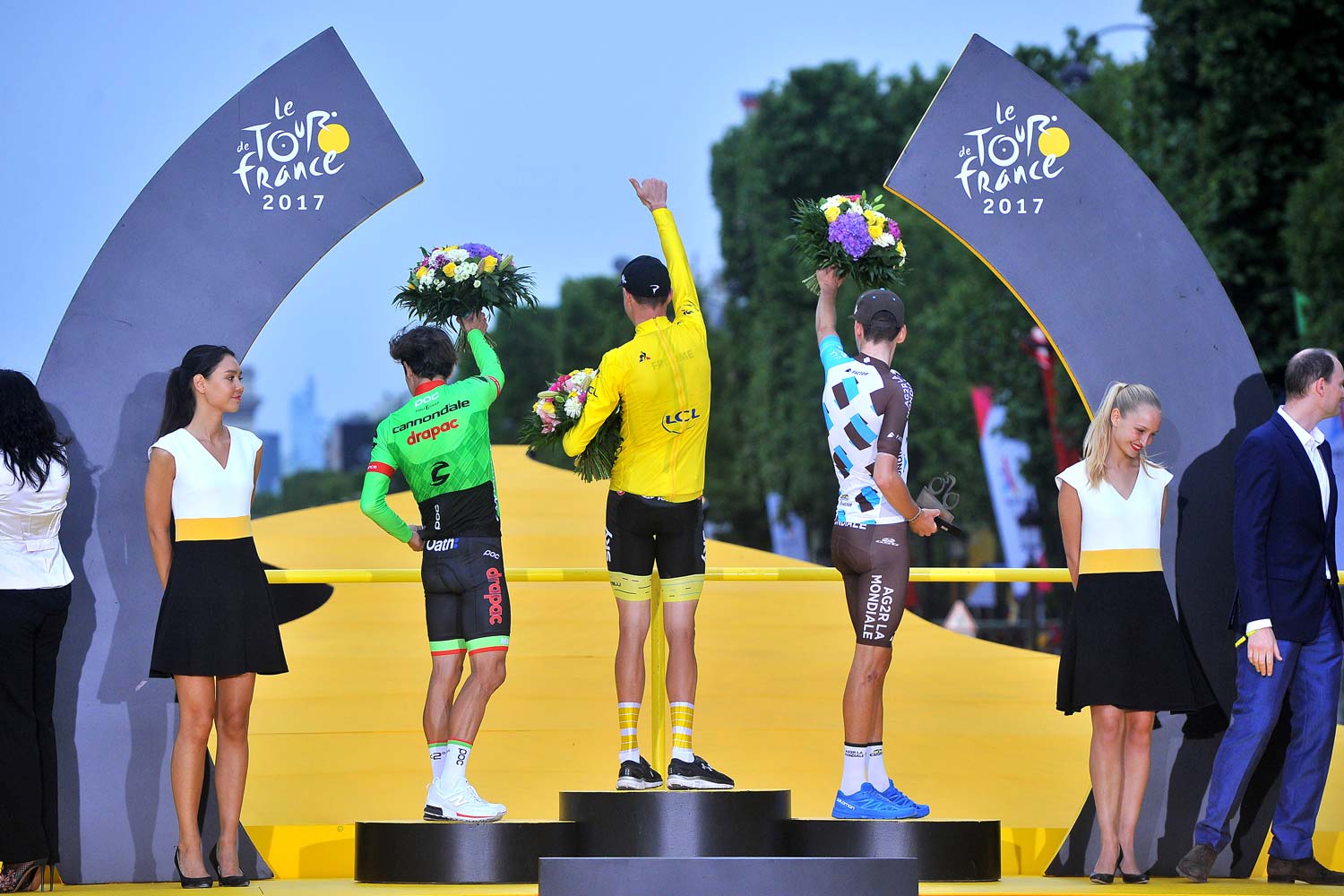 Riders associated with both the Drapac and Factor brands were seen on the podium of the Tour de France in 2017 (above).

‘JV’ has a knack of luring sponsors into cycling… but then spitting them out after a surprisingly short span of time.

“Working with Michael and the rest of the Drapac team has been a great experience,” JV is reported as saying in the press release announcing the end of Drapac’s association with the team.

“I very much admire the Drapac approach in the development of young athletes, allowing them to focus on sport and competition while still making space for academic and intellectual development.”

That approach will continue from 2019 and beyond, rounding out 15 years of cycling sponsorship for Drapac. The association with the WorldTour is over but the man behind the brand remains committed to supporting Australian cycling (and cyclists).

There will continue to be a Drapac ‘holistic development team’ and it will continue to insist that riders on the roster pursue education as well as their racing careers. But it would seem the JV effect on sponsors continues…: they come, they spend, they leave.

Drapac isn’t the first to abandon the Slipstream project and fans of the team will hope that Hult and his EF family will continue their valuable contribution for many more years to come. But it is interesting to note that, of all the teams in the WorldTour, one tends to have a knack to lure in sponsors/investors and then duly announce their departure after only a brief dalliance.

Garmin, Chipotle, Transitions, Barracuda, Sharp, and now Drapac… they are some of the naming-rights sponsors of JV’s team who have come and, shortly after, gone.

This is part of a larger discussion at a time when pro cycling seems on a precipice. It is a sport that can conjure considerable exposure. It has endured – and survived – numerous scandals. But it is propped up largely by sponsorship and benefactors… and frighteningly few other financial opportunities. It is beautiful and, when presented properly, it is engaging and fascinating and inspiring.

But cycling needs to continually strive to be relevant in a sea of other sporting properties that don’t suffer quite the same level of sponsorship fatigue.

For bike brands, there’s an obvious and tangible benefit from WorldTour sponsorship, or any spend on cycling teams, riders and events. It exposes a relevant product to the exact market that is going to buy these products.

Factor achieved encouraging results from its sponsorship investment with AG2R La Mondiale, it continues backing pro cycling, and the recent change is part of a deliberate, considered tactic.

Drapac has endured mixed reactions to his approach to sponsorship; his policy regarding education was initially mocked by some cycling power brokers, and his aim of creating a more complete rider – one who has a clear pathway beyond their athletic career – was also questioned. He has invested millions into the sport, received a modicum of branding benefits, but ultimately continues to spend largely because he has the capacity to do so.

What comes next in the merry-go-round of pro cycling remains to be seen. Being disruptive is the aim of one of the new players and perhaps that approach will yield a strong dividend. Ultimately, however, the biggest reward of all would be to see more people riding bikes more often. If that happens, then investment will continue to come to cycling.