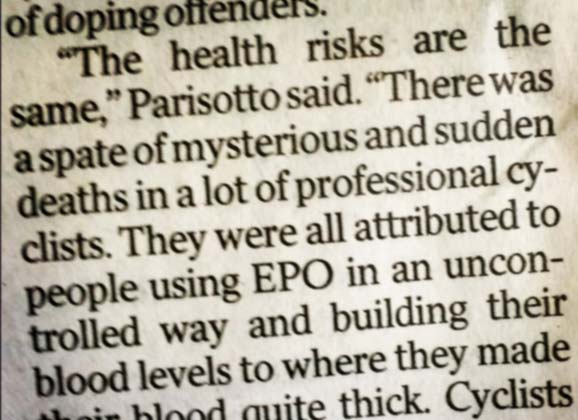 EPO and the “spate” of “sudden deaths”

Doping is bad. The moral objections are reiterated often and most of us agree that those who opt to cheat in order to win a race are nasty culprits who are destroying the fundamentals of sporting endeavour. As rank as doping is, the commentary on the effects of products like EPO often perpetuates sentiment that needs to be reviewed. It’s fair to make allegations but the results of autopsies remind us that context is required. James Stout offers his observations… 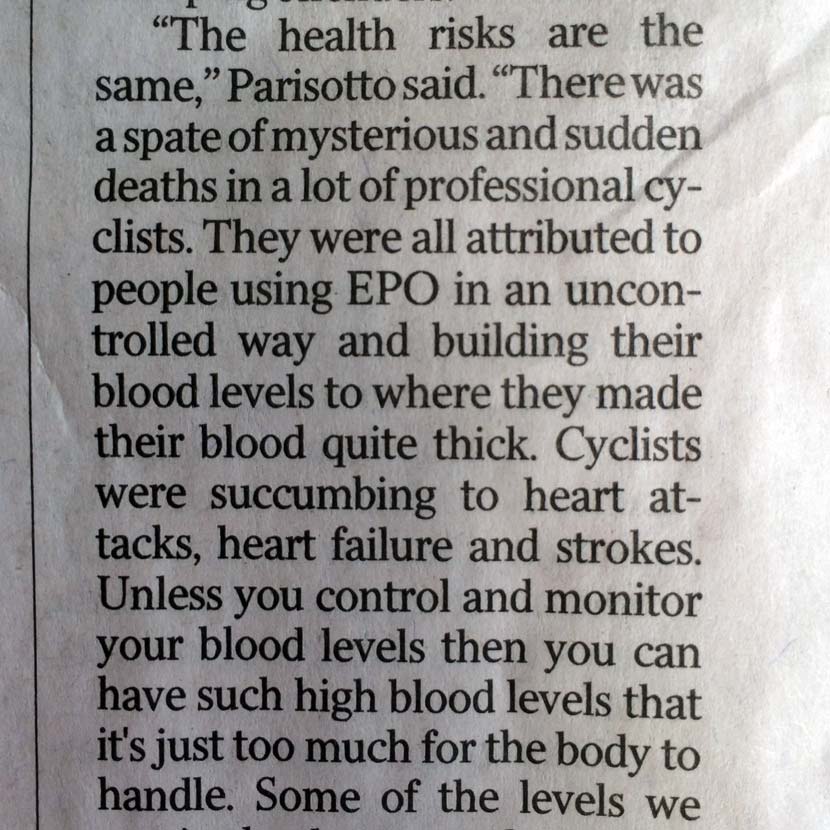 Caution required for reporting on the effects of doping

Another summer, another stage race, another day waking up to a dozen text messages telling me that someone has “returned a non negative analytical finding”. This time it’s testosterone, last time it was orally ingested blood booster, before that it was HGH, DHEA, CERA, insulin or good old fashioned EPO. The fact that I don’t need to expand any of those acronyms tells us a lot about the last two decades in cycle sport.

Once again I find myself blurring the lines between my writing on Spanish history and what I’m reading on my screen as I procrastinate. Sipping my coffee and observing the social media hurricane raining down on the latest moral transgressor carries more than a faint echo of the inquisition. Within a few hours of a doping announcement, gigabytes of tweets, statuses and blogs spring forth. A few hours later and all the major media outlets – the ones who put the Tour on page 15 during the race itself – are all over the story. Doping isn’t just cheating, it’s dangerous. They remind us of the “spate”[1] of EPO deaths. Of the young men who gave up their lives for their misguided idea of what it takes to win.

The mechanism of these deaths is well known to anyone with more than a passing interest in cycling.

“Their blood turned to mud[2]” or their hearts got tired from pushing around blood “with the consistency of  oil[3]”.

It’s common knowledge that during the EPO era riders could be heard on the rollers of hotel rooms during stage races at 2.00am so that their arteries wouldn’t become clogged with a substance so thick with red cells that it looked more like jam than juice. Kimmage recounts the story of a rider whose “blood began to clot and his heart began to stall until a room-mate awoke him”. Those who forgot to wake up, or to drink enough water, or simply pushed their haematocrit so high that they created a logjam in their arteries were the victims of this era. They fell asleep after a hard day’s training and never woke up.

It’s this story that we use to dissuade young riders from taking to the dark side of the sport, and it’s this story we bring out to castigate the idiots who can’t seem to understand that you can win bike races with sweat, not syringes.

If one goes beyond these coffee shop “facts” one finds specific examples, and the commonly cited “spate” of deaths in the 1980s and 1990s that claimed 18 lives in Belgium and Holland[4]. Cycling had, as Kimmage put it “edged its way onto the brink of an abyss”.

Robin Parisotto, developer of the first EPO test, notes that cardiac arrest and or clots caused by blood overly thickened by drug abuse were the culprits and that these cyclists, in their effort to win at all costs, were accomplices. These are strong words indeed, allegations of murder or suicide that should, if true, not go unheeded.

The issue with allegations is that, for them to be believed they must be based on evidence. Whilst neither of the above sources reference evidence to support their claims, Dr David Gerrard – an associate professor of sports medicine, chair of the New Zealand Sports Drug Agency and member of the board of the World Anti-doping Agency – does. In a text entitled clinical sports medicine, the author posits a possible connection between cardiac arrest and EPO. “More recently, the use of the drug erythropoietin has allegedly become widespread among endurance sportspeople and may have contributed to the death of a number of European cyclists”.

However the lack of committal language and citations in this piece does little to justify the assertions of Twitter’s “scientists”. Indeed in a review of 36 published papers on the subject by Bernat Lopez, all either reference each other, “expert” opinion, or nothing at all. The post mortem examinations of athletes alleged to have died from EPO are, to my knowledge, never included. Indeed if we include a search of journalistic sources we find even less precision. The number of deaths ranges from half-a-dozen to 40, the young men in question are either from Belgium, the Netherlands, Luxembourg or some combination of northern European nations.

In the absence of such autopsies, we must look for further evidence to substantiate the stories we tell on long group rides and the internet. Further searching in databases reveals “17 reported sudden deaths amongst cyclists for the period 1987-1992 are: nine Dutch, six Belgian, one British, and one French (17 in total)… This equates to an average of 1.25 sudden deaths per year per country in Holland and Belgium, which indeed may not be out of line with normal levels of sudden death in athletes.”[5].

Bille et al. published a systematic review of the literature concerning sudden cardiac death in young athletes between 1966 and 2004. They concluded that “40 percent [of the deaths] occurred in athletes under 18 years, 33 percent under 16 years” making these fatalities seem less unusual. Amongst these statistics, cycling did not figure in the top three sports that were being undertaken at the time of death. Furthermore, Bille et al report that “underlying cardiac diseases account for approximately 90 percent of exercise-related sudden deaths” and that doping as a cause of sudden death as “unlikely”[6].

Various sources suggest that EPO arrived in professional cycling in 1987, years after three of the 17 cyclists in question had retired. Kimmage’s testimony alleges the acute consequences of doping where likely to be fatal. If this is true we can also discount the three riders who died in the off-season and the one who was retired, it seems unlikely that either would have taken an acute dose before their death.

It appears that of the remaining riders, seven were amateurs who seem less likely to have had access to the drug. This leaves a young neo-pro and a cyclocross racer.

Still, the above analysis is by no means conclusive. The amateurs could have doped, so could the racers in the off-season. Interestingly a review of the literature offers, at best, an ambiguous support for the idea that EPO turns one’s blood to “mud”.

Cited sources return to a piece of empirical research which demonstrated a coincidence between the use of EPO, HGH and sudden death in a single case but no conlusive cause[7]  . Other cited works are less damming, one concluded that “Erythropoietin [EPO] does not increase vascular access clotting[8]” whilst Berglund and Ekblom report that after six weeks of subcutaneous injections of EPO in 15 healthy male subjects, which raised haematocrit levels to almost 50 percent, blood pressure increased during exercise, but not at rest[9]. This would challenge the theory that sudden death while sleeping could be due to EPO-induced hypertension.

Indeed the only significant reduction in life expectancy achieved through EPO abuse in the literature cited by these many condemning sources was seen in a study of mice with a level of HCT above 80 percent (where 47 percent was normal). These results seem less than relevant to cyclists boosting levels to below 50 percent.

What emerges then is not a “spate”, “plague” or series of deaths but rather a series of unconnected and unfortunate cardiac incidents and a spate of media attention.

At a time when French politics made it advantageous for the communist minister of sport to clamp down on doping[10] and the ‘Festina Affair’ directed media attention to a classic morality play of the kind we see plagiarised in every gossip magazine and celebrity website, cycling became a pawn in a bigger social and political game. Sadly for cycle sport, the easy story to tell – and the one people want to hear – is one of poor choices and terrible consequences. Not the nuanced one of misfortune and the very real possibility that the guilty ones rode away scott-free to 10 more years of success and a six month plea bargain.

The empirical research does support the notion that young, fit athletes can and do die of cardiac abnormalities and related issues. To remove the misfortune from the deaths of these young men (and in some cases accuse authorities and widows of a cover up) does us a dual disservice. Firstly we mislead young athletes about the very real dangers that come from exercising without engaging in a thorough physical check up. Secondly we blame innocent young men for their misfortune.

In a world without the certainty of religion and the inquisitions black and white moral judgements, we all need a moral compass. The secular state is not the immoral free for all that was constructed by religious authorities and neither would cycling be any worse without our doping myth.

We need to be very clear that the moral basis for our anti-doping crusade is not the safety of the athletes so much as the drawing of a line on what is pure and what is not. Cyclists die in crashes, of heart attacks and in traffic accidents but they are not to be blamed. Meanwhile those who make the choice to cheat, to transgress the boundaries need not have their own wellbeing held up as the victim. Rather we should punish them because the rest of us, and those innocent young men who died in their sleep are already suffering have already fallen victim the actions of those cheats.

9. B. Berglund and B. Ekblom, ‘Effect of Recombinant Human Erythropoietin Treatment on Blood Pressure and Some Haematological Parameters in Healthy Men’, Journal of Internal Medicine 229, no. 2 (1991): 125