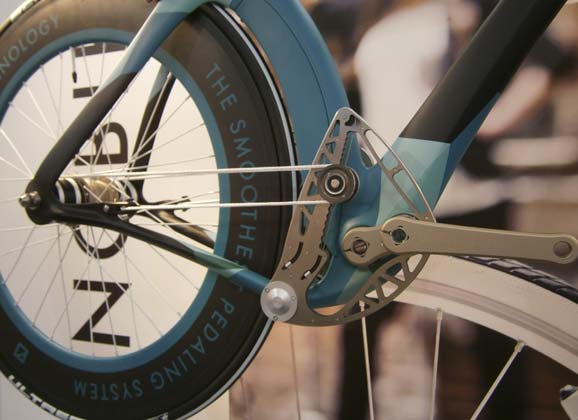 Eurobike gallery – snapshots from the Thursday

Another day on Eurobike and themes seem to be developing. Batteries (ie. electronics) are having a bigger influence every year and that trend is more obvious in 2014 than ever before: e-bikes are everywhere. (Just like e-magazines, but that’s another story.) Our man on the ground is Gary Theiss who is snapping away while he’s there working for Dirtworks, an importer of “bicycles and stuff” in Australia. He also offers a brief commentary upon supply of photos for this gallery (see below).

Click the image below to begin the slideshow of shots from the Thursday of Eurobike 2014.

Stevens stupidly light in black for only 12,999 euros. And they have a rather nicely coloured, blue bike called the Ventoux, also available in disc brake, for about half that.

The string operated bike… I do not know what to say. Hey, it is Eurobike… [Shrug.]

The mini and Bromptons. Such a cool match – Moulton is the number plate.

The triple tandem (what would you call that?). Complete with S & S Couplers so it can be packed away. Perfect for the family to get around.

Lezyne shot. Chose this because peeps know the brand. Quite a few waterproof options to mount your phone on the bars this year. Someone even has a fish tank, with phones in their bags sitting in the bottom underwater.

Cinelli – bold move guys. The pic with the fellow behind the bike has an awesome colour scheme: purple white and red.

Titanium. Van Nicolas. A lot of Ti bikes about this year.

Follow the party line. KTM in corporate colours – which happen to be orange. No car driver would be able to say “Sorry mate, I didn’t see you.”

Caterham. I immediately thought of the Caterham 7 sports car. A frame with unusual lines – but check the bar fitment in the stem. More uniqueness there.

Lastly the pedals. Edco 3AX Sway… Bizarre. They can rock sideways in a small arc of 2 degrees each way. These are the videos. I took a couple because it’s hard to see on the little screen. Hopefully one of them is usable. Pics don’t really show it: website  https://3ax-cycling.com/