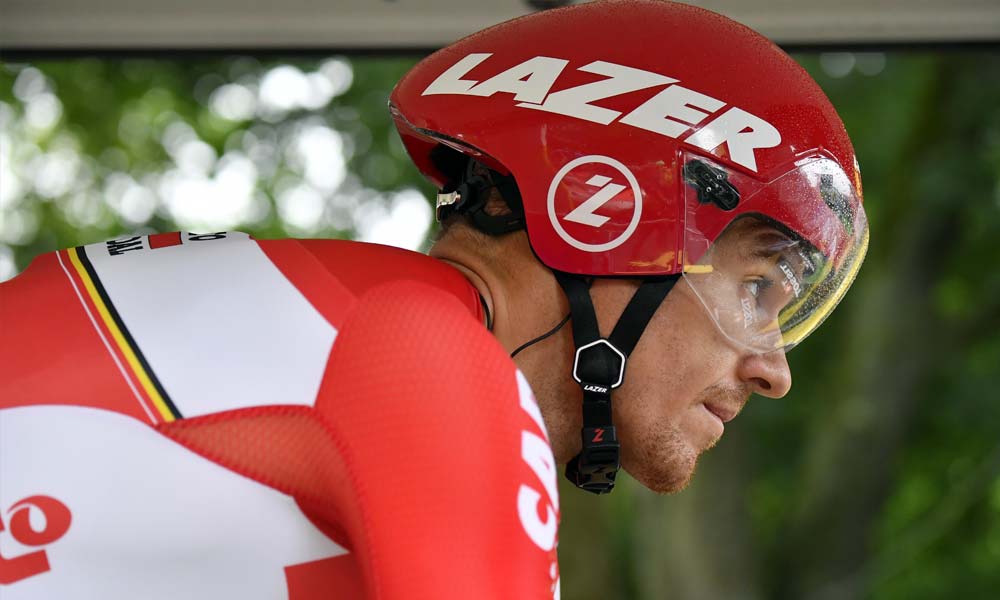 Alas, Adam Hansen’s record run of successive Grand Tour participation looks like it has come to an end. His team, Lotto-Soudal, has stated that Hansen will not be selected for the nine-man line-up at the 2017 Vuelta a España.

One assumption in modern professional cycling is that Adam Hansen will be part of the Lotto-Soudal for the Giro d’Italia, Tour de France and Vuelta a España – each year, every year. That’s how it’s been for a long time and how many believed it would be again in 2017.

RIDE Media has learned, however, that the Belgian team has struck the Australian from the selection list for the 72nd Vuelta, which is due to start in Nîmes, France, in 15 days.

If the team follows through with its decision, it will signal an end to one of sport’s most impressive feats of endurance.

The story of the record is a well known one, repeated often in recent years, and it never gets old.

Since September 2011, Hansen has contested every one of cycling’s Grand Tours – and finished each one. But the effects of a saddle sore in July could herald an end this impressive record.

RIDE Media became aware of the news about the possible end to the record succession of Grand Tour starts by chance.

We contacted Hansen to discuss a number of technical innovations – including new hand-made shoes by his brand, Hanseeno, and his possible use of new Campagnolo disc brakes at the Vuelta – only to be told that the Spanish race may not be on his program this year.

Our discussion included references to his penchant for new disc brakes released by Campagnolo earlier this year. And that’s when Hansen let his news slip.

Will you be racing with disc brakes at the Vuelta?

“Unfortunately,” he casually replied, “I have not been selected for this year’s Vuelta. So no, I won’t be using them.”

Are you serious? This would stop your record. This can not be true…!

“I was just told by one sports director recently that I would not be taking part in this year’s Vuelta, that I did not make the selection.

“The team has riders other than myself who they would prefer to take.”

While upset about not getting to continue the trio of Grand Tour tradition that began at the Vuelta in 2011, Hansen was diplomatic with his reaction.

“Sure,” he said, “I am not thrilled with this decision and it’s hard for me to take.

“It’s not the way I wanted it to end, but this is the team choice and it’s not in my control.

“I have to respect what they say.” 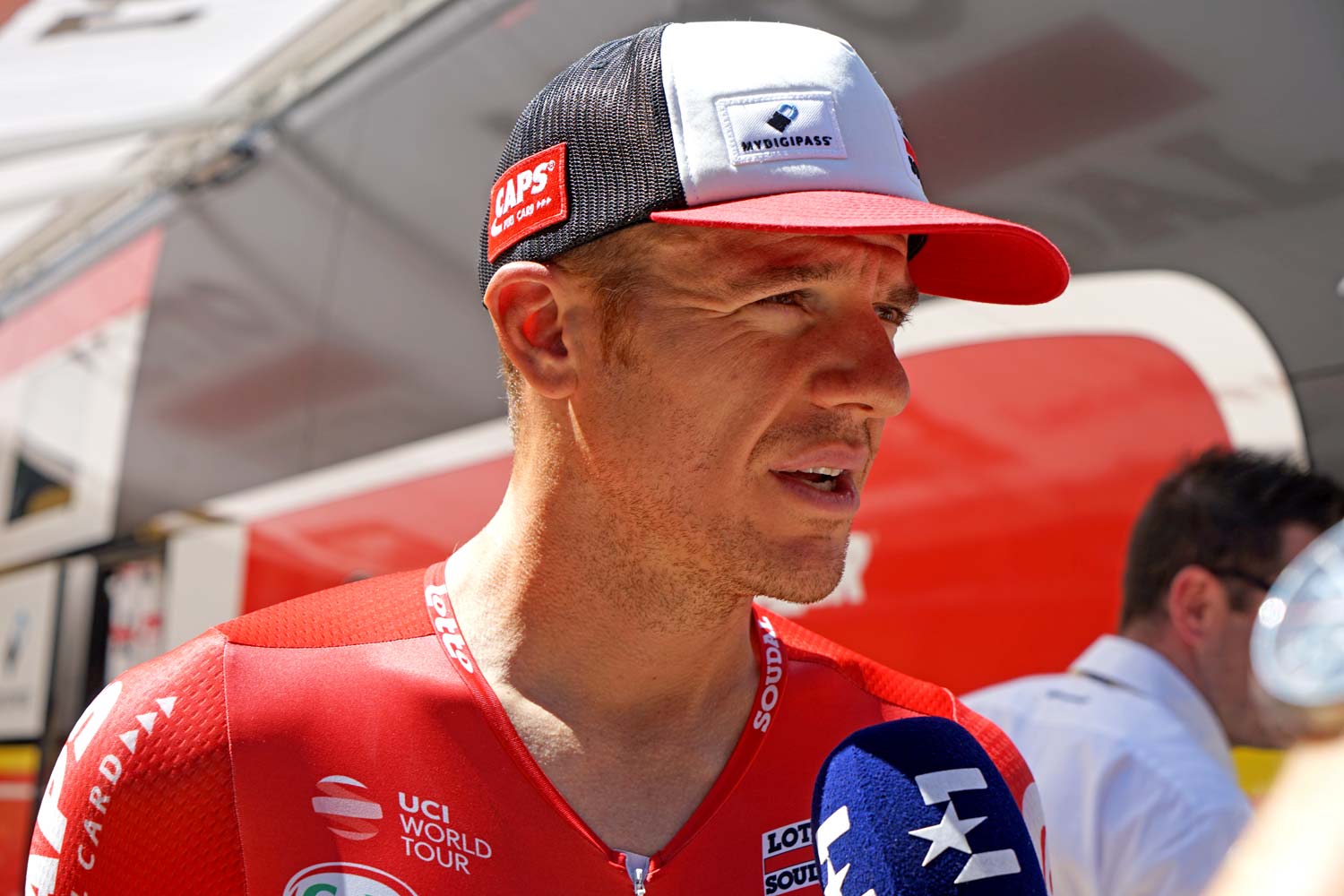 Hansen at the Tour de France in 2017; that was his 18th successive Grand Tour… and the final one, despite his desire to compete in the Vuelta a España in August and September.

First Grand Tour without Hansen since 2011

In advance of the Vuelta last year, he explained how the Spanish race is one of his favourites – if not the most enjoyable of the Giro/Tour/Vuelta options. And he laments not being able to race it in 2017.

“The Vuelta is one of the best Grand Tours and in our team its always a good race for me,” he told RIDE.

“In our team, there is not an obvious outright leader for the Vuelta and it’s nice to go there and have your chance for yourself – have a bit of a free card.”

He may be known best as a domestique but Hansen has picked up a couple of Grand Tour stage wins during his record-breaking run and his victory in the 19th stage of the 2014 Vuelta is a highlight of his long career.

“I love racing in the heat and that’s what the Vuelta is famous for.”

Instead, he’ll be considering what else may come from the 2017 season.

For Australian cycling fans, perhaps it’ll be a good omen for the world championships in Bergen, Norway. Michael Matthews is one of the favourites for the road race and Hansen would be a genuine asset for the event on 24 September. But, for now, he’s not really certain what will come next.

“I have already looked forward on the calendar,” he said, “and there are not many other races left.

“I like Hamburg, which I might ask for even though the team is also selected. Then, I guess, maybe the Tour of Britain, Münsterland Giro or the Tour of Guangxi, which would be nice.” 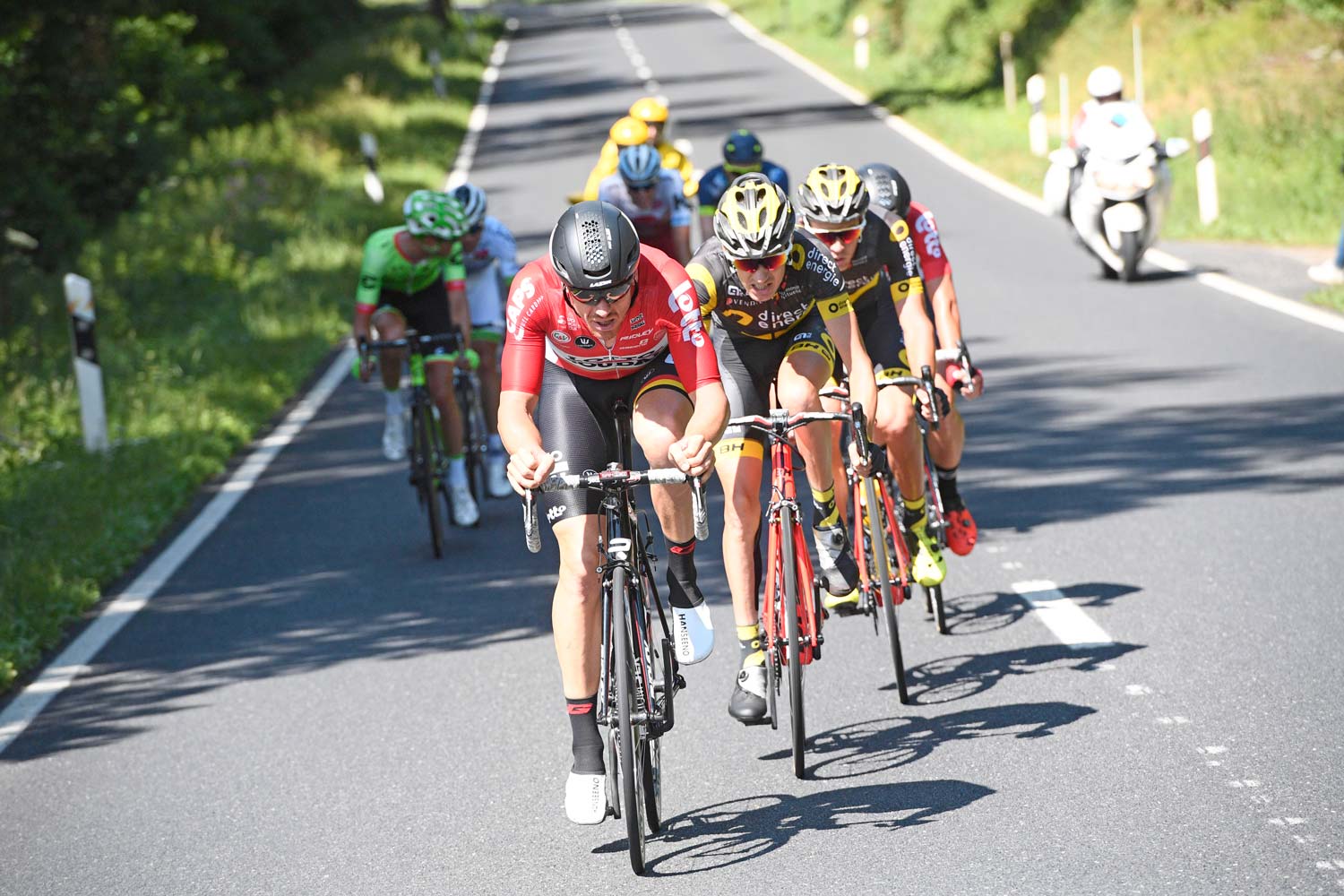 When he’s not working for others in the team, Hansen likes to take a chance in breakaways at the Grand Tours. He targets several stages each year and twice it has paid off with a win: once at the Giro (2014), once at the Vuelta (2015).
This photo (above) is from stage three of the 2017 Tour de France.

“I’d rather not comment too much on this situation,” said Hansen earlier today, only hours after learning of the team’s plans. “I don’t take the decision lightly.”

From our understanding there is still a tiny glimpse of hope that the team may amend its decision – or perhaps that’s just an optimistic attitude after hearing Hansen’s positive reaction to news that will likely be a surprise for many in the cycling realm.

The decision was based around the preference of other riders but a saddle sore at the Tour also hindered Hansen a little but he insists he’s overcome that trouble. The team cited that as one concern but the rider believes he has overcome the problem and would have been fit to compete at the Vuelta if he made the selection.

Surely, from both a tactical and publicity perspective, including Hansen in Lotto-Soudal’s Vuelta line-up would be a savvy decision for the team.

The Australian has been an innovator, motivator and workhorse who has earned respect not only from his team-mates but many peers within the pro peloton.

As his Grand Tour record indicates, his work ethic is phenomenal and the media and public alike are fascinated by his ongoing achievements in the Giro/Tour/Vuelta trilogy.

From his perspective, Hansen understands the justification for the decision but he is also keen to point out that any possible limitations to performance should be considered in context.

“I know I had a problem with a saddle sore during the last week of the Tour, but this is almost non-existent now,” he told RIDE.

“I have already started training already for the Vuelta and I expect to be ready, in form and able to fulfil anything to team asks of me should they have a change of mind.

“But,” he quickly added, “the choice is made from the team and I must respect that and move forwards.

“My job in the team is to do what the sports directors wish and this is what they wish.”

The previous record of successive Grand Tour participations was 13, held by Bernardo Ruiz. Hansen eclipsed this in September 2015…

Looking forward to other challenges

Hansen is renowned for his ability on the bike and never-surrender attitude, but he is also a gentleman of the sporting world. During our discussion, he never hinted that the team’s decision was one he wanted to try and alter.

Ever the optimist, he added: “For every door that closes another one opens and this could also bring some good into the situation.

“Sure, I would love to ride the Vuelta, but there are so many beautiful races on the calendar that I always miss out on, so now this is my chance to pursue them.”

Earlier this year, Hansen explained to RIDE how his ambitions to contest cycling’s famous spring Classics has been hindered by his seemingly perpetual appearance in the Grand Tours.

Perhaps the benefit of a rest in August and September 2017 will serve Hansen well next April when he may finally get the chance to race Paris-Roubaix and some of cycling’s other ‘Monuments’ like the Ronde van Vlaanderen and Liège-Bastogne-Liège. 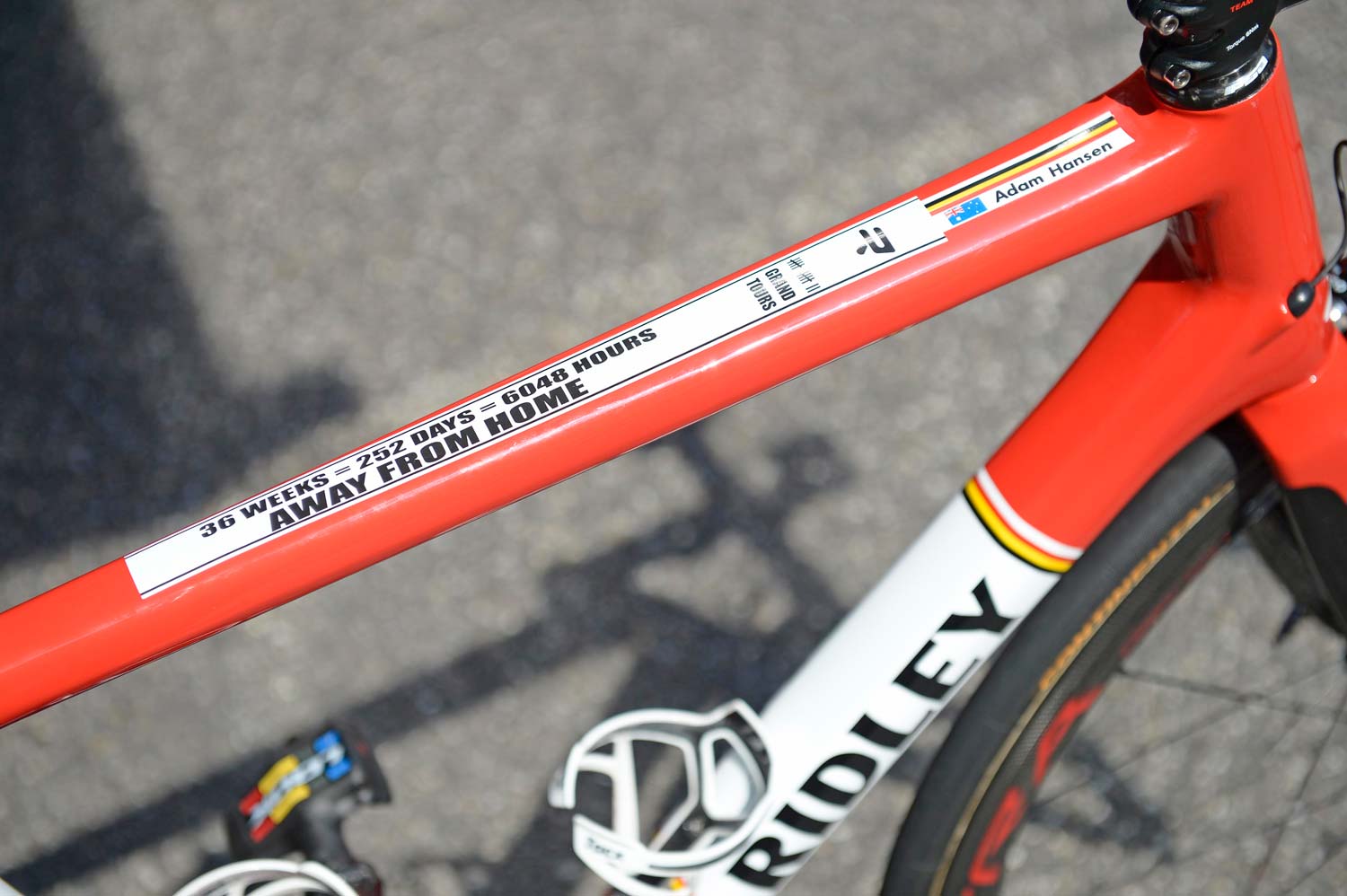 Lotto-Soudal has long been supportive of Adam Hansen’s desire to contest Grand Tour after Grand Tour. Since he broke the previous record, at the Vuelta in 2015, he has been issued bikes with references to his accomplishments.

Over six years Hansen has completed 18 successive Grand Tours. Throughout his stellar career, he has lined up for a total of 25 of the three-week long races and finished all but three of them.

Ultimately, the end of this amazing run is likely to come because of an injury that Hansen insists has been remedied and will not hinder his performance.

The loyal domestique has been an asset to Lotto-Soudal since he joined it in 2011.

He remains an integral member of the Belgian team and although, for now, he is likely to miss out on a 19th successive Grand Tour it’s been an amazing journey for Hansen.

We wait with interest to see if Lotto-Soudal may alter its decision about the Vuelta team selection and encourage our readers to let us know what they think about the news.

The start of the Vuelta is just over two weeks away but the Grand Tour is going to be missing one of the true characters of the peloton in 2017.

*For more on Hansen’s thoughts on disc brakes, his new shoes and a few other matters, stay tuned for part two of our interview with the 36-year-old… (coming soon).