Flashback: Simon Clarke column – how he got his start in cycling (from 2010)

The victory by Simon Clarke in stage five of the 2022 Tour de France prompts a flashback to a column he wrote for RIDE Cycling Review back in 2010 when he was just getting started in the professional ranks.

– Below is an article by Simon Clarke published in November 2010. 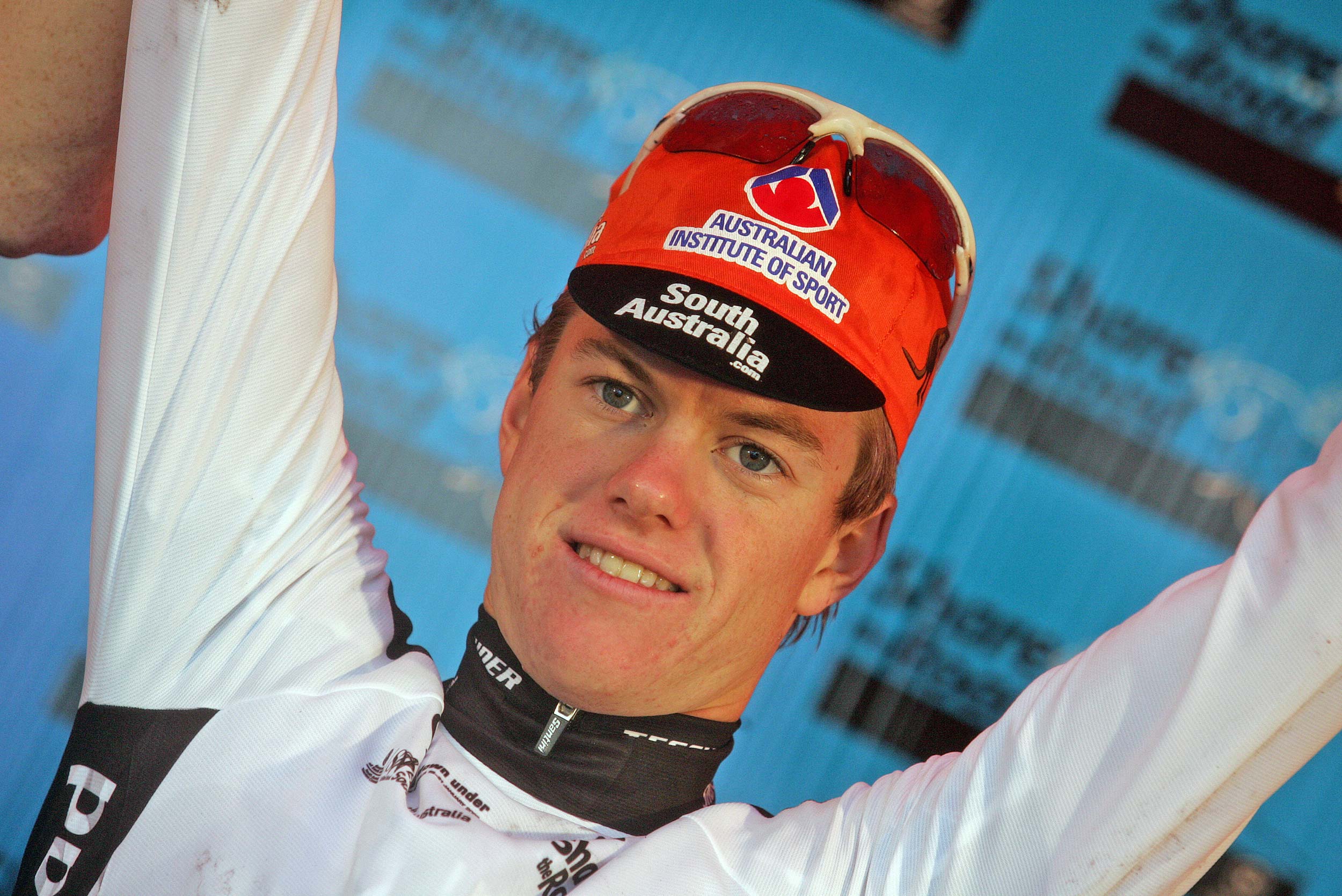 Simon Clarke was the winner of the Youth Classification in the 2007 Tour Down Under, in the formative years of his pro cycling career.

Unlike many professional cyclists I have come to this sport without a big family history in the sport. None in fact. My mode of discovering cycling came through the Great Victorian Bike Ride (GVBR) 13 years ago. I was in fifth grade of primary school as a 10-year-old when the ‘Family and Friends’ group at my school came up with an idea of challenging themselves to do the fun ride.

It’s an annual event that has been organised by Bicycle Victoria since 1984 and gives people the opportunity to pedal along in a safe environment, with support vehicles and a community atmosphere for a week early each summer.

I heard of the idea and questioned why the students had not been part of it as well. No answer was given and it was agreed that I could join and so I became part of this peloton of discovery. In late November 1997, off I went as the only student. 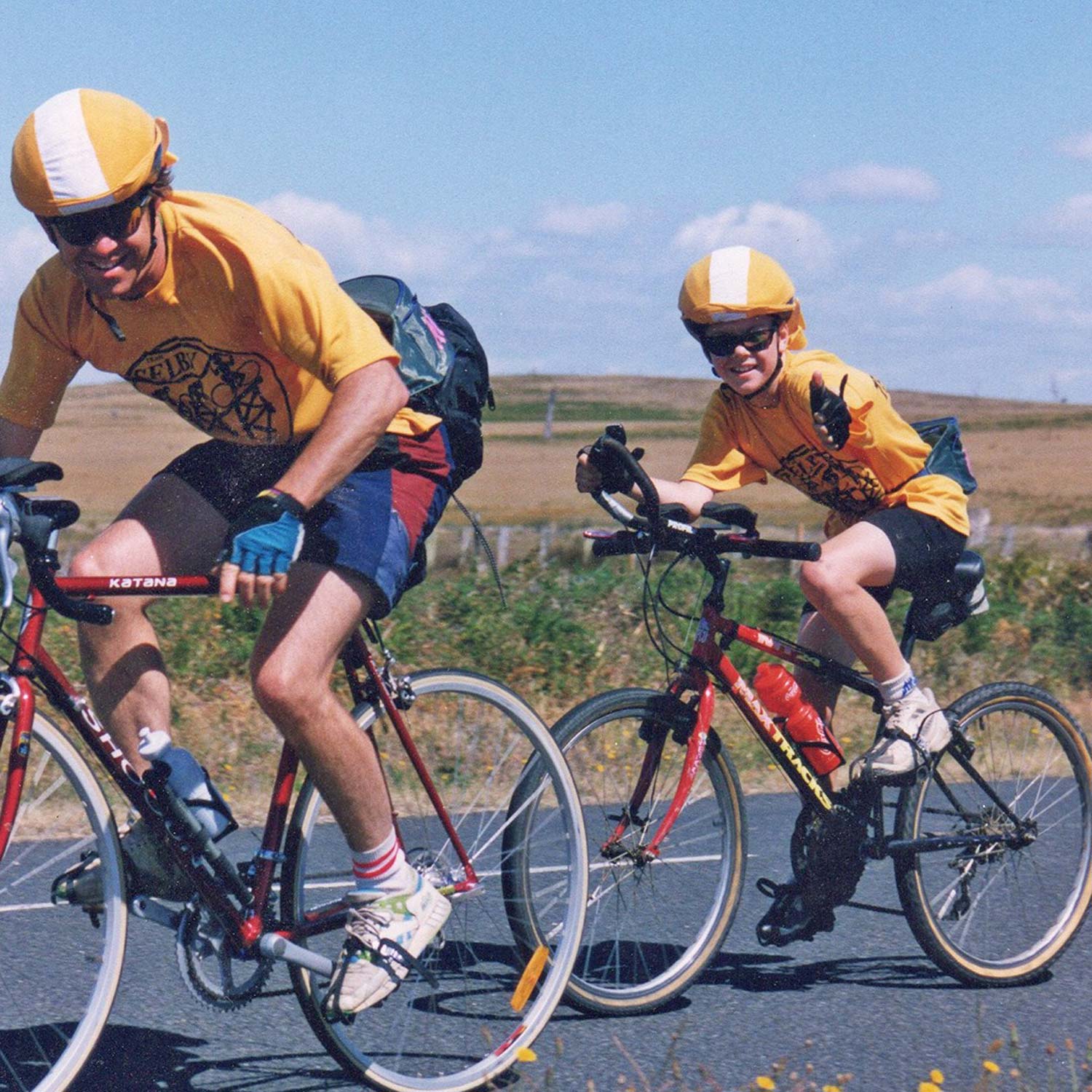 November 1997, when it all began… Simon Clarke on his MTB (with aerobars) riding the Great Victorian Bike Ride. (Photo: Bicycle Network)

On my mountain bike with 24-inch wheels and the Family and Friends group from Selby primary school, I set off to battle the 600-plus kilometre course over nine days. Much to my surprise I got through it without too much trouble.

Throughout the following year my enthusiasm grew for my newly discovered sport and the next November I went again, this time with a nicer bike and a bit more of an idea of what I was in for.

It was during my second GVBR that I was presented to Dean Woods. The Olympic gold medal winner from the team pursuit in 1984 and a professional cyclist during the 1990s, he was a patron for the ride, a celebrity from the racing scene. I had the privilege of riding with him for a day, along with 60 or so other school kids, who were all about four or five years older than I was at the time.

Once we started getting towards the end of the day and our designated campsite for that night, I realised that I was the only one left who was still able to keep up with Dean. The rest of the kids had fallen behind. It was at this stage that Woods came to me with some words of encouragement. He uttered a few words that would have a lasting effect on what I did after my school days: “You really should join a club. You have lasted longer than the other kids.” 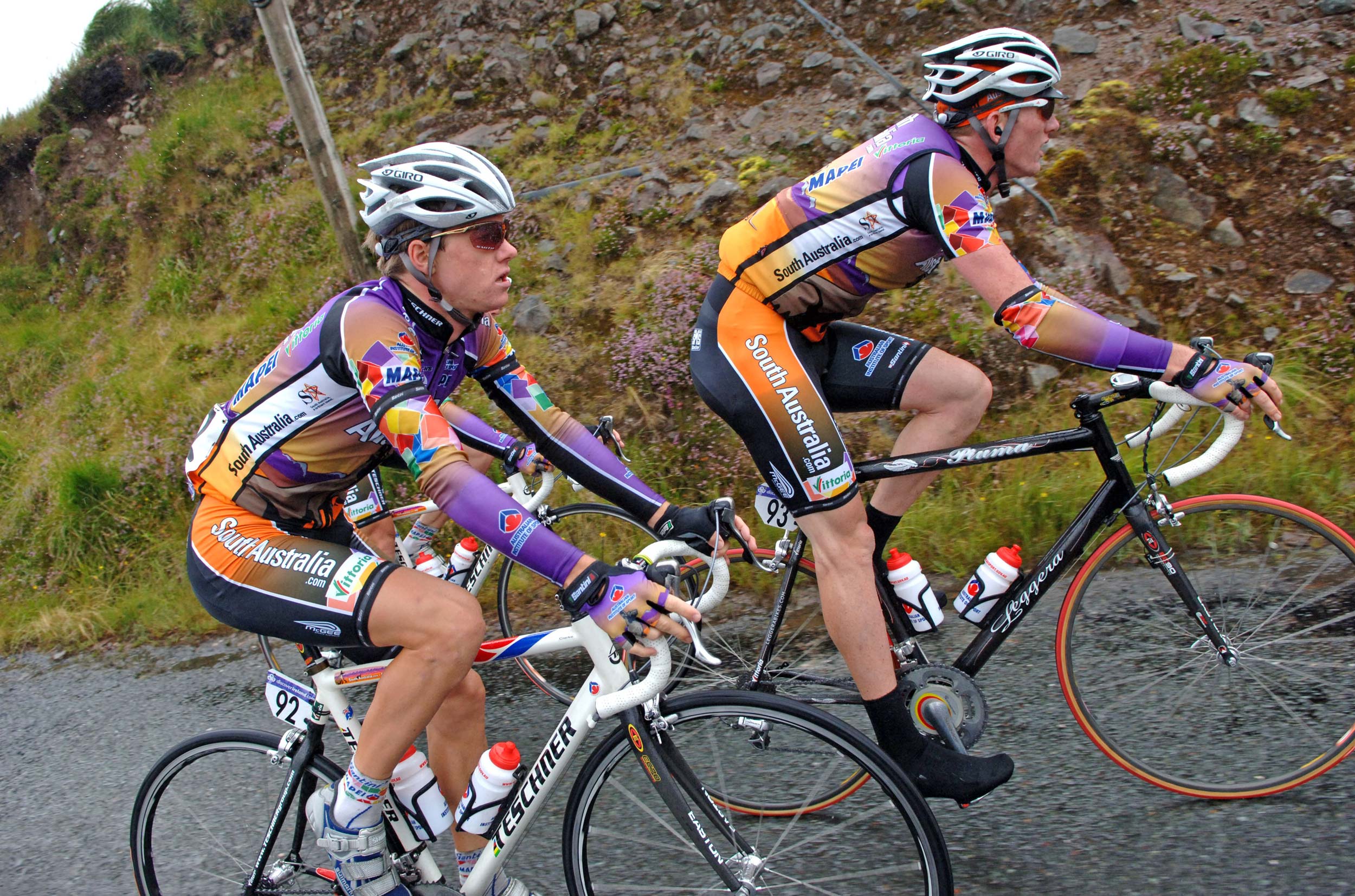 Simon Clarke and Zak Dempster during their time as team-mates with the South Australia.com-AIS under-23 development team. (Photo: Graham Watson)

I played basketball but was too short.

I tried tennis but didn’t have the Midas touch.

I enjoyed swimming but it didn’t click – perhaps my feet were too small.

I stood around on the volleyball court but once again felt too short to have an influence on the game.

On the football field I lacked the rough-and-toughness.

In baseball I didn’t have a quick enough arm.

And doing athletics I just couldn’t stay with the best… 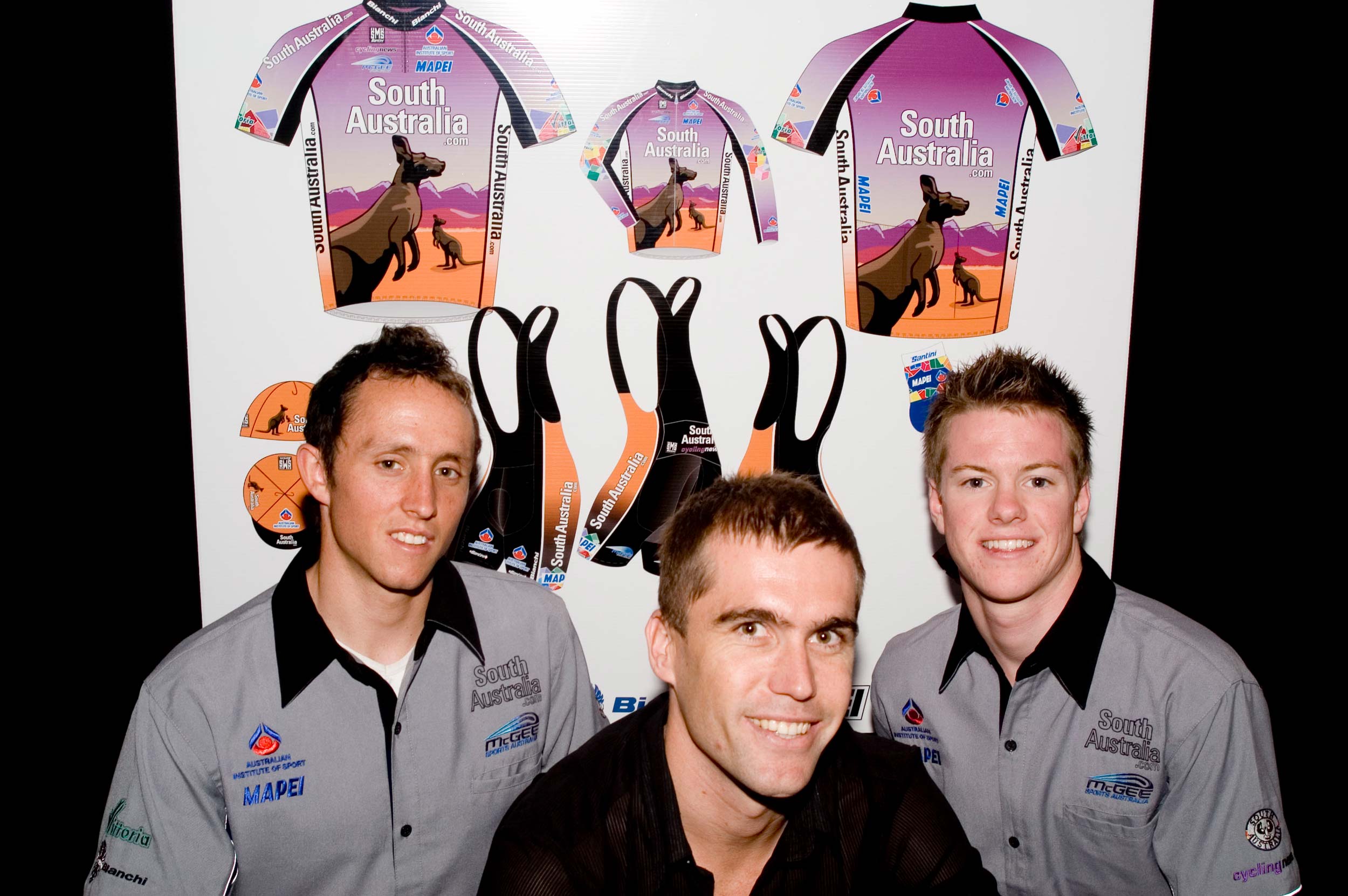 Matthew Lloyd, Brad McGee and Simon Clarke at the launch of the SouthAustralia.com-AIS team.

The first couple of years I raced at club level while learning the tricks of the trade. When the road nationals came around in 2000, I made the state team as an under-15, and thought this could be an opportunity.

I prepared as best I could, and went down to tackle the race in Tasmania. Much to my surprise I came home with a bronze medal in the time trial and fourth in the road race. It was at that point that I thought, ‘This could just be my sport’. I had been racing on the bike for not even two years and I had managed to medal at nationals.

I spent the next couple of years developing my cycling skills on the national scene, and raced all over Australia.

Once I got to junior level, riding was starting to take over. I had dropped all my other sports and life was either about school or cycling. With this attitude, I graduated to being selected for the team for the junior world championships, first of all as a road racer and, the next year, both track and road. 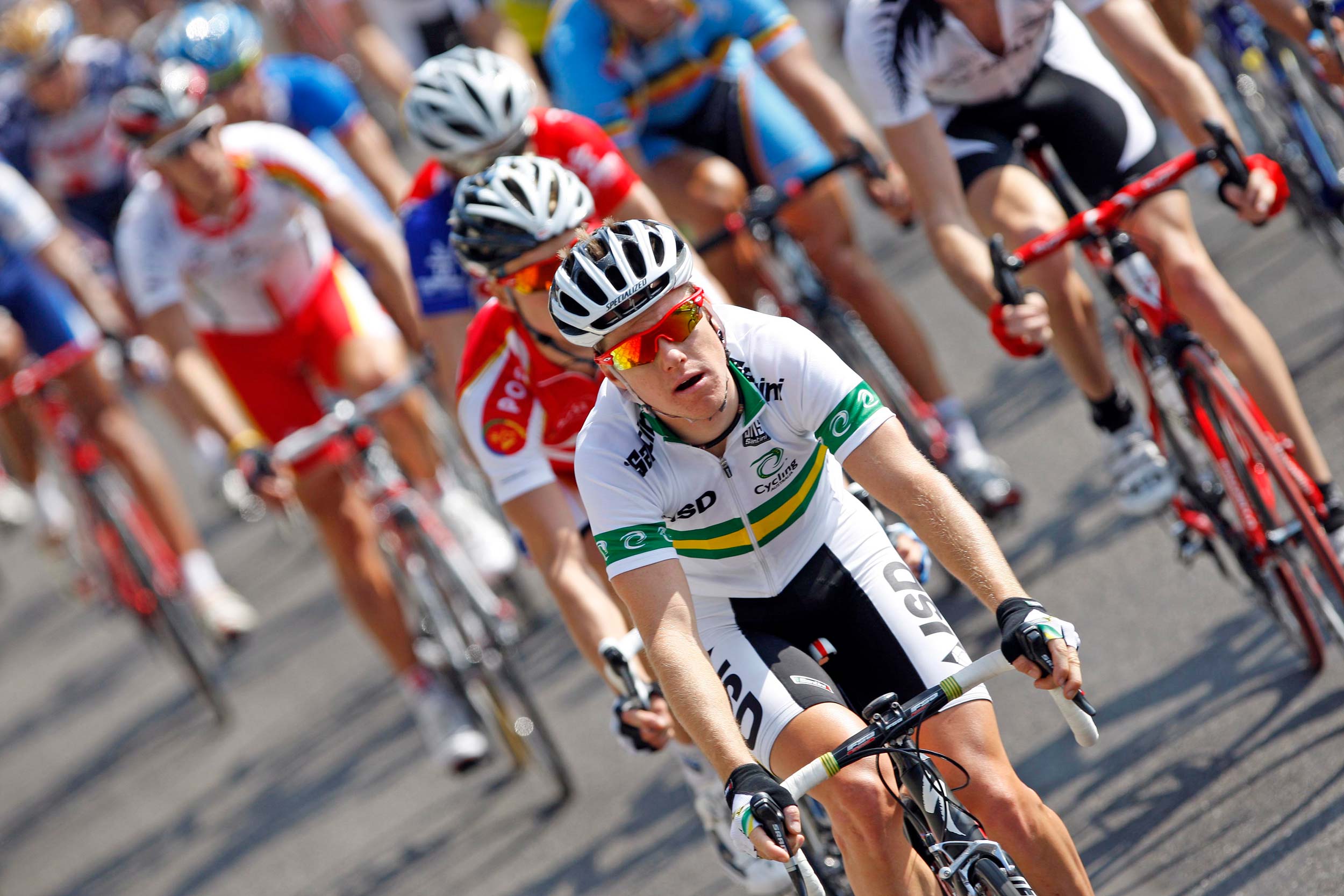 Simon Clarke was part of the Australian team for the elite men’s road race at the worlds of 2009 in Mendrisio. The winner that day, Cadel Evans, credits the work of Clarke as being key to his success… (Photo: Graham Watson)

I was stranded in Europe and left questioning myself after all these years living abroad. It wasn’t the ideal start to my pro career. Instead of racing, I was left to consider what I should do now given that I was officially unemployed. After three months of riding around without a team, I managed to arrange a deal with the ISD team to race out the rest of the season.

My dream was back on track and I set the goal of making the Australian team for the world championships in Mendrisio. I managed to get back to form quickly enough, made the selection and was there to support Cadel in his gold medal ride.

It still feels too good to be true and it will until I do my first race with their jersey on my shoulders. While Alberto Contador is leaving the squad at the end of the season, next year is still going to be really exciting. Astana has signed a lot of guys who are around my age, talents that are knocking on the door to replace Contador, such as Roman Kreuziger, Robert Kiserlovski and Francesco Masciarelli. Having this young talent base working with the experience of Alexandre Vinokourov and directeur sportif Giuseppe Martinelli – who is famous for developing riders such as Marco Pantani, Gilberto Simoni and Damiano Cunego – it is definitely going to be something great to be a part of.

Next year is going to be huge for me and hope just as exciting for those of you watching.