This is not a new story. It is possibly even one that you have read before. But it was only ever published in print and, with this post, it now exists in our digital archives.

When sport events grind to a halt, there is a chance to reflect. Earlier this month, AAP – the Australian Associated Press – announced it would shut down in June 2020. Journalism suffered a major blow. Now the entire sport industry is in disarray and it may be some time before we read a race report again.

And so we look to our archives for features that are worth reading years after they were originally published.

After the AAP announcement a few weeks ago, RIDE Media published an acknowledgement to the work done by Roger Vaughan at the media agency. He is a journalist who introduced many to the nuances of sport with his work over the past 25 years. Occasionally he moonlighted as a freelance cycling writer.

Roger Vaughan is well respected by riders and readers alike and his work is a catalogue of events in Australian sport, including one of the biggest triumphs of all: Cadel Evans – 1st in the Tour de France!

This is a flashback to his review of a race in July 2011, and a reminder of a time when cycling was not just enjoying a moment in the limelight in Australia, it was front page news. 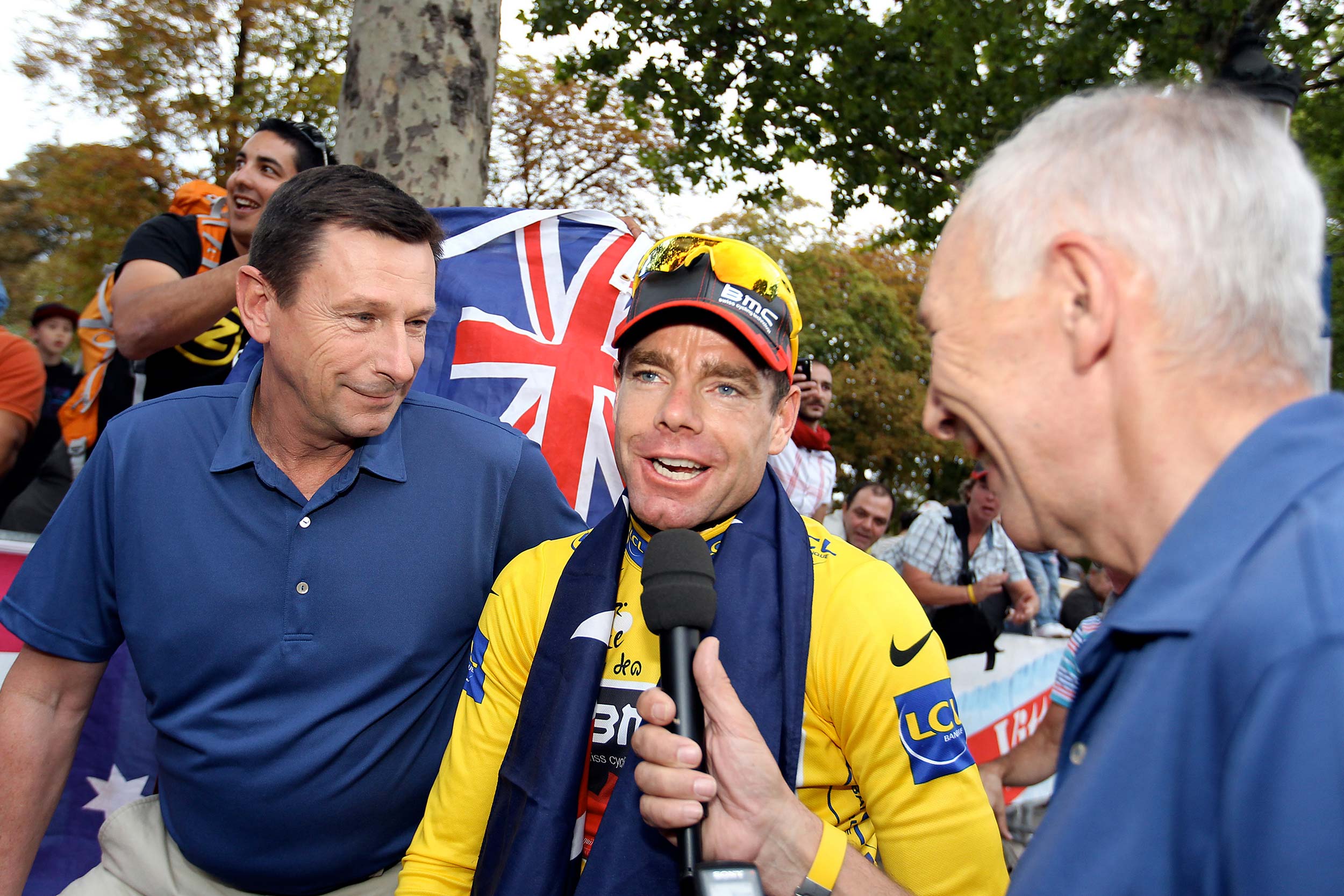 Paul Sherwen and Phil Liggett with the first Australian winner of the Tour de France, Cadel Evans. In 2011, Cadel wore the yellow jersey for just one stage of the race… the one which matters most, the final day. (Photo: Kathy Watt)

Those who land on Planet Tour at the start of July tend to become cocooned in the events of the race. News from the outside world may filter through but by then it’s late and delirium has set in. With that in mind, an observer in Australia who has covered cycling for a long time was asked to describe the reaction to Cadel Evans’ 2011 Tour de France victory from the local media…

The question is, how best to approach this brief? The publisher wants a feature that looks at media reaction to Cadel Evans’ stunning Tour de France triumph. Now, you can smugly sit back and note that the blanket coverage given to Evans is a long time coming for a great sport. And don’t worry, we will get to that later.

But you also know that RIDE Media readers are a cluey lot who like to look at things differently. Which brings us to an apparent university study that says something about the Australian media and how many of us look at ourselves.

A quick internet search failed to find evidence of the study, apparently commissioned in the wake of the terrorist attacks on 11 September 2001 and the Wayne Carey AFL scandal in early 2002.

Maybe it’s just a myth, a Chinese whisper that has found its way around Melbourne newsrooms. But the supposed findings of the study would not surprise anyone with any experience in the Australian media.

The story goes that someone measured the space given in Melbourne’s Herald-Sun tabloid newspaper to 11 September and then Wayne Carey’s stunning exit from North Melbourne.

Yep, the study found that the Carey story had a bigger run.

You’re reminded of the Carey anecdote as you flick through the Monday, 25 July 2011 edition of the same paper. Some bloke is splashed across the front cover, clad in yellow and arms raised. The headline is ‘Our Hero’. Pages four, five, six and seven are devoted to the same story, plus the requisite four-page spread in sport.

Page three of the same edition is given to the sad death of Amy Winehouse, pages eight and nine are devoted to the previous Friday’s mind-numbing massacre in Norway.

That same morning, Mia Freedman sparks a furious public backlash when she goes on a morning TV show and declares that Cadel Evans is no hero, that the coverage of his Tour win is out of whack, etc.

A top Australian cyclist, Bridie O’Donnell, was moved to write a bristling response to Freedman, which found its way into the Herald-Sun a few days later.

In my humble opinion, Freedman and O’Donnell have valid points.

Evans probably isn’t a hero – no-one’s life was saved by the Grenoble time trial – but anyone who looks closely at his life story must surely be inspired. This is a kid who was born in the outback, nearly died at the age of eight when kicked in the head by a horse and surely had blown his best chances of winning cycling’s greatest race.

Evans is an epic case study in the benefits of hard work, strong focus and learning from your mistakes.

Err, and Mia – only two months before expressing your disdain for the adulation of Evans, you’d been much kinder in an opinion piece about teenage yachtie Jessica Watson. Isn’t it a bugger when old blogs are dredged up and put into context?

But enough about our news values and how we look at our sporting her… oh – I mean, sporting stars.

What a great few days this was for cycling.

It was front-page news everywhere – priceless publicity for the sport. 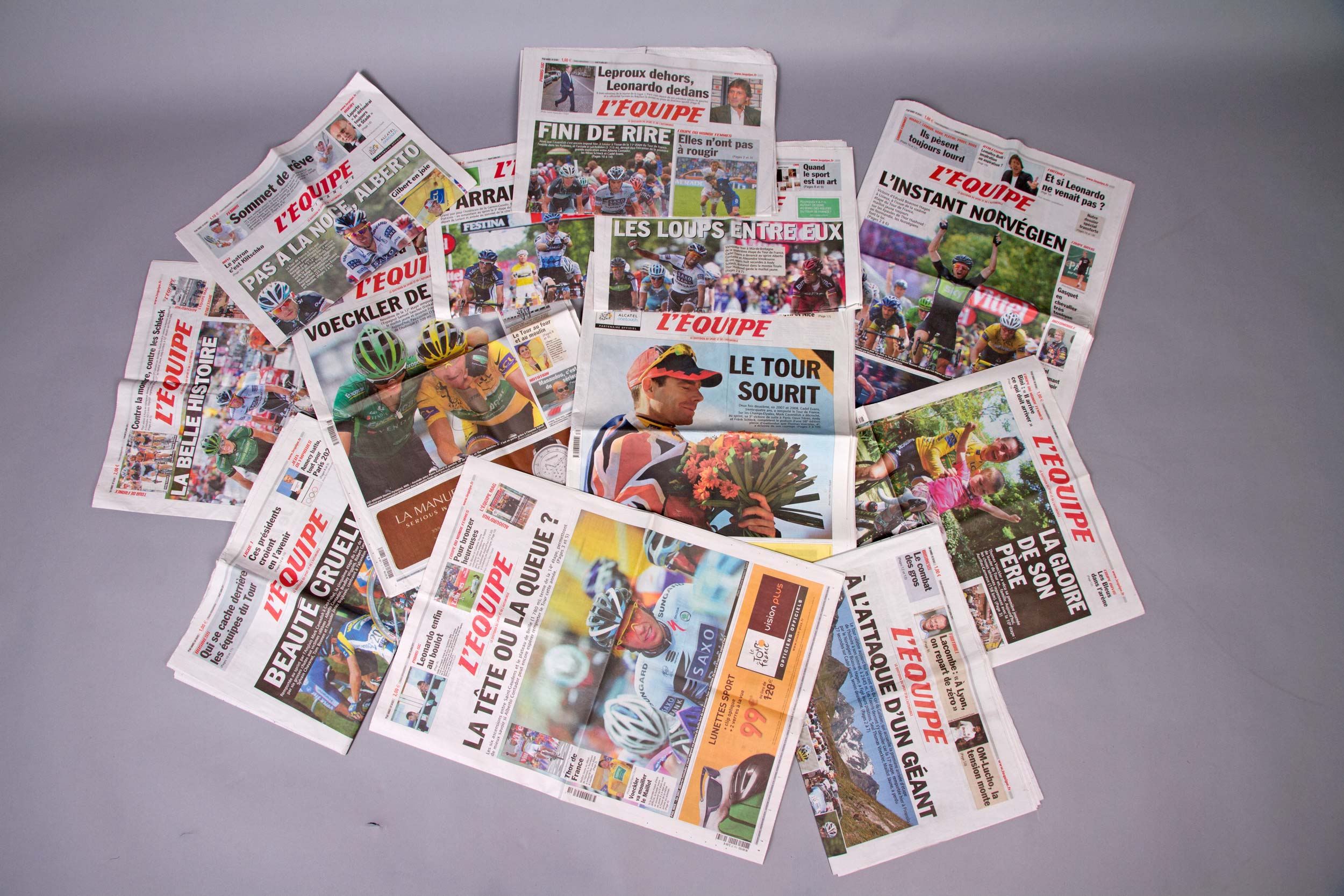 During the 2011 Tour, SBS reaped the benefits of the skyrocketing interest in Evans’ fortunes. According to an SBS media release, the network recorded its highest ratings for the year with their live coverage of the final stage. “Sunday’s stage reached 2,467,000 viewers nationally for at least five minutes of consecutive viewing,” boasted SBS on 25 July.

Climbing in the Pyrenees, the first massif of the 2011 Tour. Here we see every rider in the final top five, plus eighth overall, lined across the road. From left to right: Thomas Voeckler in the yellow jersey leads Cadel Evans, Andy Schleck, Alberto Contador, Christophe Riblon, Fränk Schleck and Ivan Basso. (Photo: Graham Watson)

The parade stage to Paris was also their most-watched in Australia – beating the epic duel to Alpe d’Huez two nights previously – proving that it’s not the actual action that prompts viewers to tune in, but the story itself.

Of course, the sprint in stage 21 was an impressive one from Cavendish but the contest didn’t compare with what we saw on the final Friday.

Everyone, it seemed, was tuning in to see Evans stand on the final podium.

It was a far cry from only a few years ago, when you had to know someone who had a dodgy satellite dish set-up to watch the racing live. Now non-cycling fans were tuning in en masse, initially curious about the Cadel mania, then seduced by the panoramic camera shots and finally hooked by the exploits of the main combatants on the big climbs.

Tour nights were cropping up everywhere and there was even a newspaper story or two about how the altered sleep patterns were affecting national work productivity. 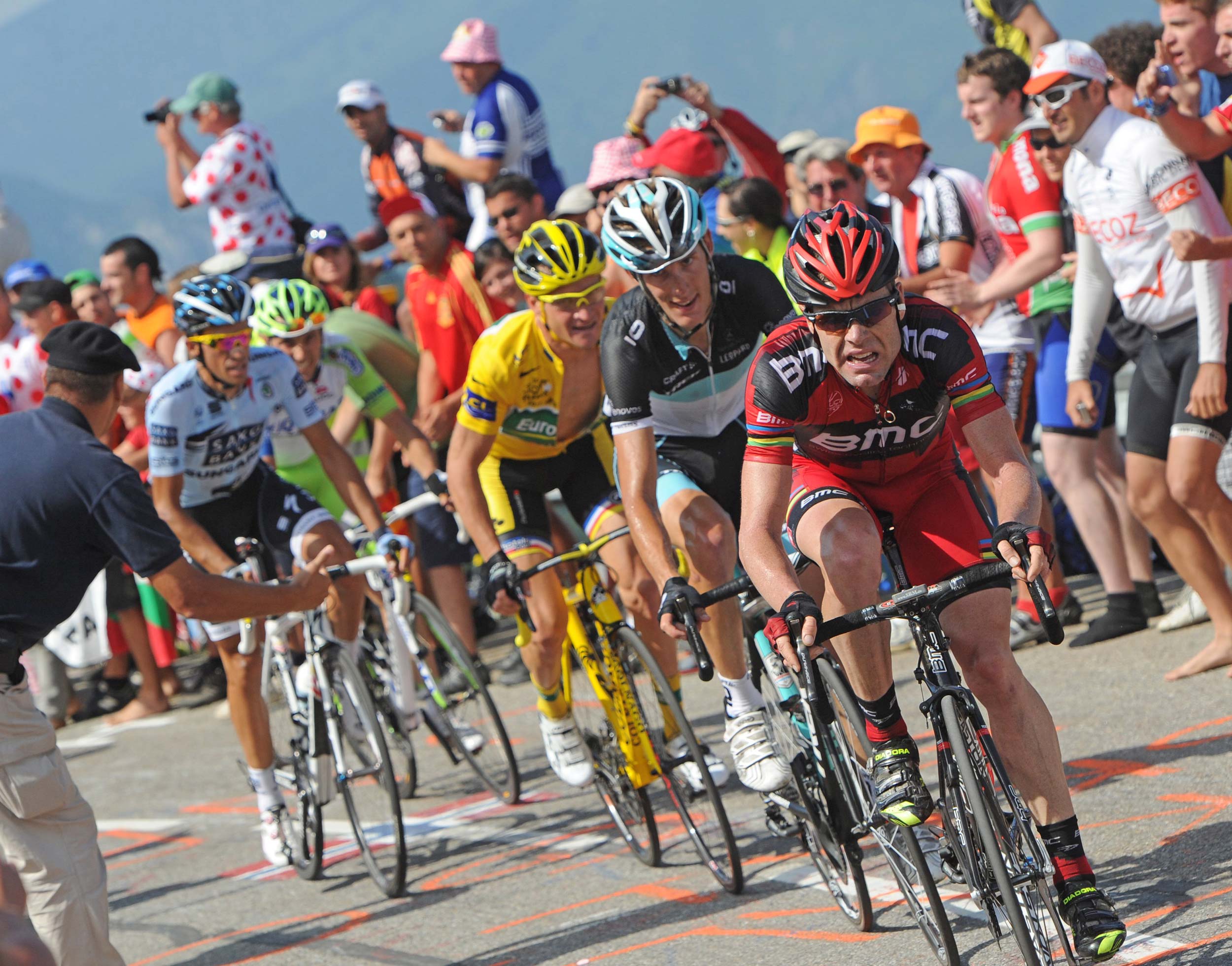 There were many defining moments of the 2011 Tour de France. This is one of them. On the road to the Col du Galibier in stage 17, he Cadel Evans took responsibility. To hell with tactics, let the strongest lead. That’s what he did. (Photo: Graham Watson)

How sad that there was not this sort of Tour consciousness in Australia 30 years ago, when Phil Anderson changed everything. It was 20 years ago that it all started to change. This was when SBS took a punt and started showing nightly 30-minute Tour highlight programs.

One decade ago, in 2001, Stuart O’Grady went within a whisker of winning the green jersey after having worn the yellow jersey up until the stage to Alpe d’Huez… but he was never in contention for the title as that mountain that year came at the start of the second week.

Still, the Australian influence was growing.

It was in 2001 that Brad McGee made his Tour debut. The next year Robbie McEwen would win the first of his three green jerseys. But Evans was still a mountain biker…

Australian cycling promoter John Trevorrow had tears in his eyes in 2001 as he stood on the Champs-Elysées, listening to a big group of fans sing Waltzing Matilda. Australia had become as much a part of the Tour as Chris Boardman or Lance Armstrong. This country really belonged there.

Also by 2001, France’s wire service Agence France Presse (AFP) had sniffed the Anglo winds and had given Scottish reporter Justin Davis the brief of covering English-language riders. He continues to be one of the world’s best day-to-day cycling writers. Australian Associated Press has a reciprocal agreement with AFP, so thanks to Davis’ efforts all Australian media was finally receiving a consistent flow of stories about the exploits of riders from this country in Europe.

Of course, any Australian media outlet that employed Rupert Guinness already enjoyed such information. If the likes of Anderson and Allan Peiper blazed the modern trail for Australian riders, Guinness did the same for the Tour’s media pack. In 2011, The Sydney Morning Herald, Rupert’s employer [at the time], had a dedicated cycling section on its website.

That was indicative of how the media reacted to the race in 2011. And the timing of Evans’ win also could not be better.

On the final week of the Tour, officials from the fledgling GreenEdge Australian-based team (which would earn its place in the WorldTour for the first time in 2012) visited the race to shake hands and hob-knob. Evans will not ride for GreenEdge – all being well, he will surely end his career at BMC (as he signed a contract extension up until the end of 2014 a week after the Tour). But he supports the bid for an Australian team to join the top tier and his win has also given them priceless free publicity.

Every year for the last decade, the question was asked: when will we have an Australian team in the Tour? Next year this country could have it all – a defending champion and its own team.

But let’s not become too excited. By 29 July, a quick scan of The Age showed no more stories about Cadel Evans. The only cycling piece was that Mike McKay resigned from GreenEdge, where he was chief executive. Cycling is on the right track in this country – even the media now agrees – but we’re still toiling up the mountain.